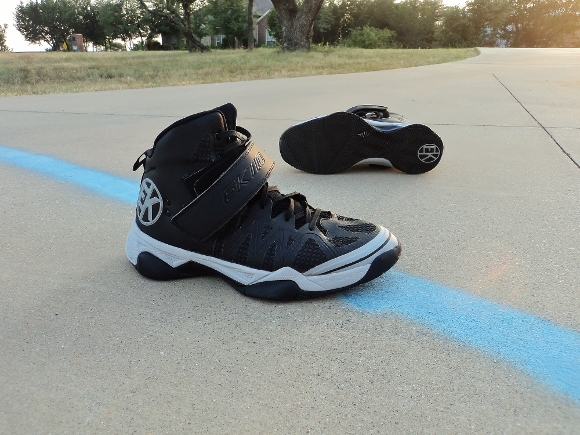 Yes, the shoe is almost a year old. Yes, Nightwing reviewed the shoe back in 2014 – but with the new season starting up and players of all ages looking for that extra ankle protection (see what it did for Chef?), now is the time for a refresher course from Ektio.

If you have never heard of Ektio then you haven’t been paying attention to Weartesters.com for long. With only 3 shoes in their stable, it’s understandable that you haven’t seen them in stores, but surely you have noticed the previous reviews, right? Oh, you haven’t? Allow me to re-introduce them.

Ektio is the brainchild of Dr. Barry Katz, an orthopedic radiologist and ballplayer. After discovering stats that 93% of ballplayers will injure an ankle during their court life, he developed the Ektio system. This system is a series of straps and sole bumper technology (we will get into both later) that provide the most stable ride on the market, hands down. Basically, you get an ankle brace IN the shoe. Do they work? Only one way to know. Here…we…go… 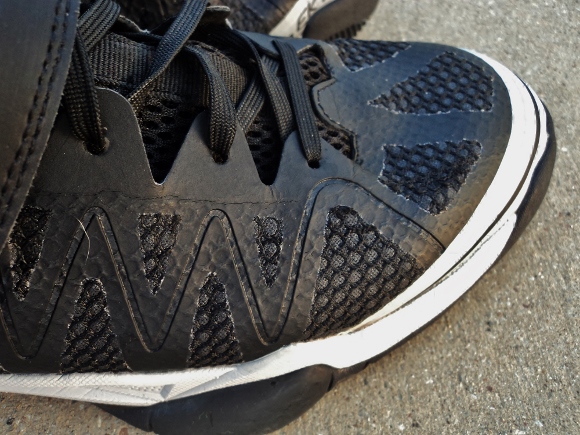 MATERIALS – We’ve seen this before from other companies that are much bigger so no shame in a mesh/fused upper. The first shoe from Ektio I reviewed, the Post Up, was a suede/synthetic upper, and I had high hopes for the future. They took some break in time, probably more because of the straps and high cut, but they were BUILT. The Alexio changes up completely, as you can see. The mesh has a fabric backing so ventilation is cut to almost nil, but the fuse overlays keep it together and find a middle ground between flexibility and support. They do show some creasing so not they’re as durable as the Post Up, but should be fine for your roughest game. The ankle collar is a solid fuse and is almost Posite-like, but not quite as thick. Think adidas Kobe 1 and you are on the path. 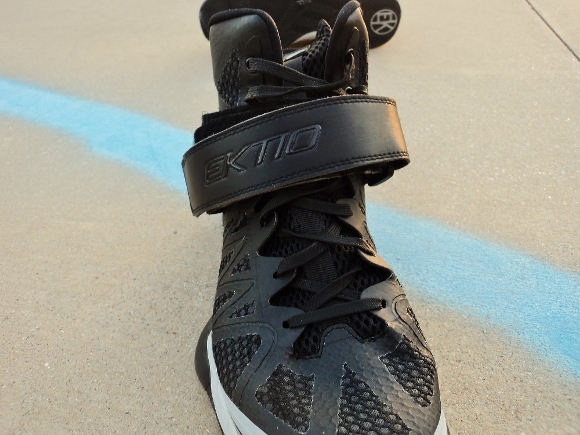 FIT – Forefoot and midfoot are spot on; I could have went up a half size because I like a little wiggle room for those long game days, but for a 1:1 fit stay true to size. The fuse fingers bring the shoe up and around and really let you pull and tighten for a no-slip grip. The midfoot is more of the same and the lower strap locks your ankle into the heel of the shoe so you are in. Only area I missed on was the ankle – I never could get complete lockdown in the upper part of the shoe, lacewise. The straps made sure I wasn’t in trouble, but I could still feel my ankle hitting the front and back of the shoe. The mouth of the ankle is cut WIDE and the laces are narrow, so I know why, and again, I was never scared in the stability department but overall, I would have liked a little better control. 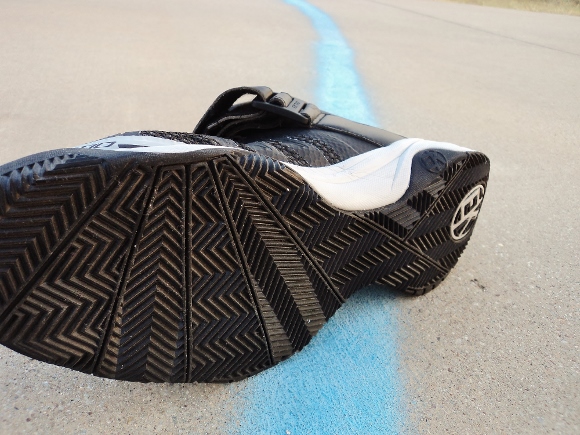 TRACTION – This is where it gets real like early Meth. This is T-raction. The Alexio could get grip on a glacier (or that court Finish Line put down for the 3-on-3). Herringbone, all over, with deep treads that don’t catch dust much and will last for a season or more. That is grip in every direction up there and the forefoot flex grooves just add to the feel. Not much of an innovation, but lately more prevalent in basketball shoes; the grooves allow the outsole to flex with the midsole and foot and really dig in while playing, making cuts or moves, etc. Not much, but it will help reaction time and speed. One thing Ektio has had perfect since day 1 is traction. 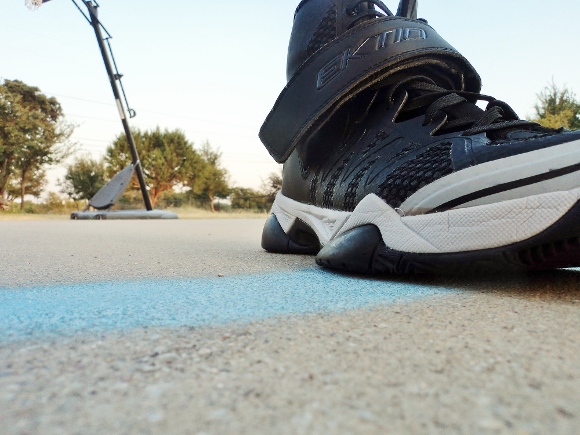 CUSHIONING – One thing Ektio HASN’T had down since day 1 is cushioning. Don’t mistake – it isn’t horrible, it is just underwhelming. Straight EVA midsole absorbs impact great and will last for a long while, but there is no feedback and the shoe just feels dead. Jumping and landing were easy and gave no pain, but playing on my forefoot and moving on defense felt lagging, especially with the cut and feel of the shoe. I would love to see Ektio couple their brace system with a branded cushioning of their own, much like Boost or Micro G, or even find a company like d3o and work together. With a little bounce the Alexio would feel even less bulky. 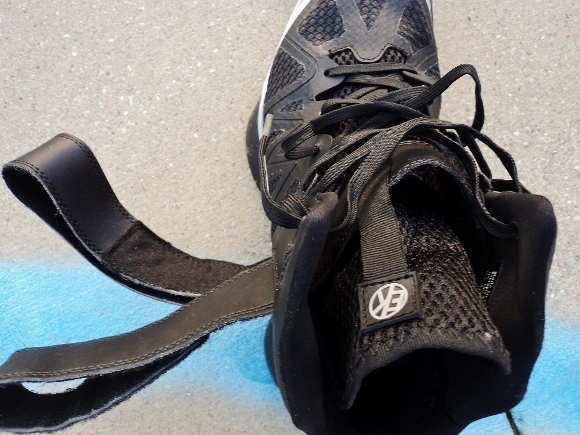 SUPPORT/STABILITY – This may take a little while. Ektio is built on support and stability, so the Alexio should top this category no doubt. It does. I will try to get this in writing. There are two straps: one connected around the heel and across the instep and the other a little higher and more around the ankle. They are both anchored on the medial side of the upper, where you can see the two rivets, and wrap through the buckle and velcro down over the top. They both go through the same buckle. When tightened, you have a built in ankle brace. There are two tongues, one under the straps and one over the straps, so you get no chafing or hotspots. All told, lockdown is LOCKDOWN. Complete. 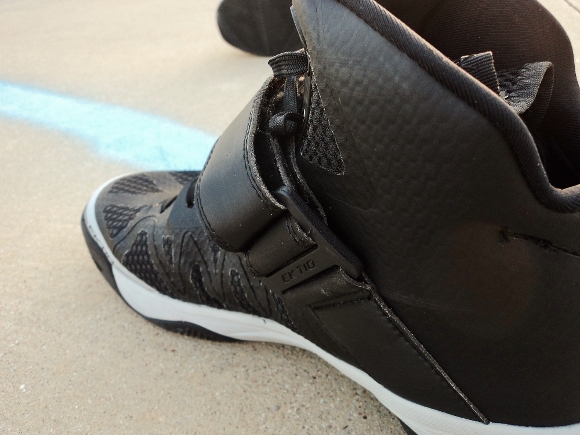 But honestly, I think the bumpers do more. Yeah, the straps lock the foot in and make fit feel great, but the bumpers I can feel working while playing. They look bulky and make the outsole look wide, but they are raised at about a 3° angle so standing still, or flat running, they are not on the floor. Once the foot leans, the contact and push the shoe and foot back upright. Like an outrigger from other brands, but WAY more effective. I won’t say no chance of rolling an ankle, but I will say about a 95% chance you could land on a foot, get stepped on, and fall off a three story building and be okay.

OVERALL – The Alexio is not much different from the first two models and that is good. Ektio knows their market and strategy and caters to that area – injured players looking for an alternative to the norm. Although I didn’t cover it, they have also done a job with transition – the shoe just feels less supportive than it is. I expected a Brooks Beast orthopedic shoe the first time I tried the brand back in 2012, but the shoes play fast and free. You don’t notice the support and straps until you need them, which is how it should be. If you lace up tight anyway in regular shoes, you get the same feeling. If you are looking for the ultimate support and traction – security in two areas we all need – look no further. If you like a Boost/Micro G/Jetlon bounce and lightweight feel, do not stop here. Just wait though, one day you will need the straps. Ektio Alexio is a shoe for utility, not Instagramming, and for that it gets no better. 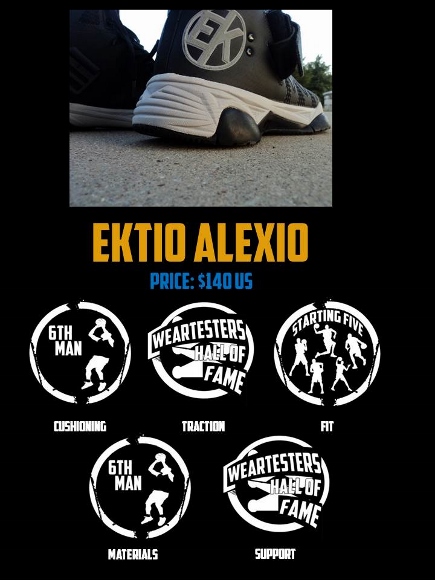