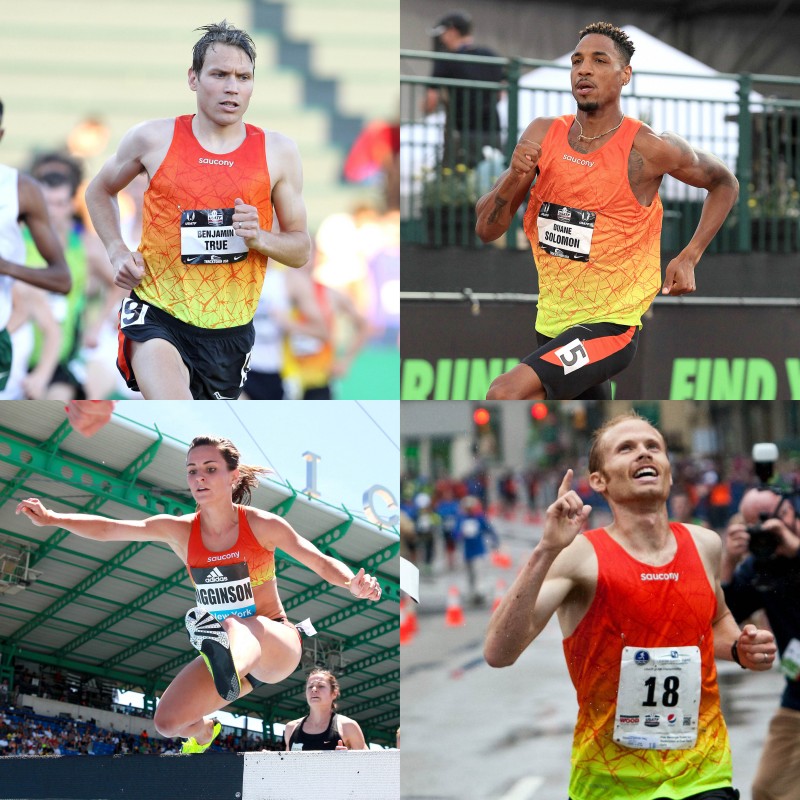 The Saucony Blog just posted the stories of a few of their pro running athletes. They are all training for the Big Stage — a spot on the 2016 USA Olympic Team. Here are the stories of four Saucony podium seekers:

Ben True – The Lone Wolf
Ben is currently living in Hanover, New Hampshire with his wife and US Olympian, Sarah True. He holds the American 5k road record (13:22), a feat he achieved without an official training group or coach. He’ll be competing in the 5,000 and 10,000 at the 2016 U.S. Olympic Team Trials in Eugene, Oregon between July 1st – 10th.

Duane Solomon – Learn To Listen
Saucony Racing pro Duane Solomon is currently living and training in Orlando, Florida with his wife, Cindy and son, Liam. He holds the American 600m indoor record (1:13.28). A tremendous talent, Solomon is coached by none other than 800m American record holder Johnny Gray, who sits one spot ahead of his pupil on the U.S. all-time list. Duane will be competing for a spot on team USA at this year’s Olympic Trials.

Jared Ward – Return To Form
Saucony Racing pro Jared Ward is currently living and training in Provo, Utah with his wife and two children. He’s coached by Brigham Young University coach Ed Eyestone, a two-time Olympic marathoner. Jared qualified for the 2016 U.S. Olympic Team Trials – Marathon at the 2015 L.A. Marathon with a time of 2:12:56. This time may not separate him much from a dozen other men of the same caliber but he has proven that he can compete successfully under adverse conditions. In addition to claiming the U.S. marathon title last year, he also took first at the U.S. 25K and 20K championships, and second at the half marathon. He can contend in tactical races, although he is training for pace, saying he believes it will take a 2:09–2:10 to make the Olympic team. He’ll be competing in the 2016 U.S. Olympic Team Trials Marathon in Los Angeles, California on February 13th at 10:06 a.m. PT.