Reebok owns CrossFit — well, at least the CrossFit Games — and seeing what the brand thought would be a huge market (it is), Reebok partnered with the workout system early and the benefits have been amazing. Eight years later, we get the CrossFit Nano 8 Flexweave, the newest shoe built specifically for the Games. Performance review, you say? Sure, why not…

Like a hot knife through butter. No, really, the blade traction pattern in the forefoot grips everything in the gym with no issues at all (basketball designers should take note). The forefoot uses a widely spaced wiper-blade pattern with the second and third rows slightly turned under the ball of your foot, giving some additional lateral coverage. This rubber is thick, solid, and finally showing signs of wear after almost four months of three day a week workouts.

The midfoot and heel are more linear in pattern, which helps with lateral traction and climbing activities. For those that have never done a CrossFit workout, or never worn a CF-specific shoe, the midfoot usually has traction under the arch of the foot that extends up the midsole of the shoe. This is called the RopePro on Reebok shoes, and it helps immensely in keeping your feet on the rope and going up instead of down — the rest is up to you.

Going from mostly runners and basketball to a CrossFit shoe is a serious endeavor. While cushioning is premium in the other lines, weight training/CrossFit is more about transition and stability. The CrossFit Nano 8 follows that same platform, with a little more.

The midsole is a solid EVA that rides low with only a 4mm heel to toe drop. This means you are almost flat on the floor in the shoe. There is, however, additional forefoot cushioning to help with impact off landings from jumps and runs. It isn’t enough to make the shoe seem slow or wobbly, but it does take the sting out of those last few sloppy landings when you are dead dog tired and wanting to quit or puke.

For any activity where stability is a must (cleans, squats), the low-riding flat base never faltered or felt like it would crush under stress. It isn’t as solid as a true squat/deadlift shoe (like the Reebok Legacy), but the CrossFit Nano 8 has enough for most gym rats that lift and work on other exercises.

The CrossFit Nano 8 uses Reebok’s latest Flexweave material that was reviewed on the Fusion Flexweave last month. In case you missed it, this means you are getting a textile upper mixed with TPU strands that is flexible over the foot but solid and strong for lateral movements and containment. Flexweave is based on a figure-8 design and the strands can be intertwined to create some serious looks.

Beneath the Flexweave is an internal bootie that keeps any of the TPU from chafing and rubbing. (It’s needed, because Flexweave isn’t the softest material to the touch.) The bootie runs around the heel collar and feels great on bare feet or in socks. It does hinder ventilation around the midfoot to the heel, but the toes stay airy and cool.

With the wide use of textile/mesh uppers and internal booties fit has never been better across the shoe industry, and the CrossFit Nano 8 falls right in line. The Flexweave fits right over your foot in the toebox and forms around the midfoot almost perfectly. Any dead space is taken by the inner bootie. Additionally, the forefoot features a wide toebox for splaying and gripping while working out and climbing — but not so wide you want to go a half-size down. It is designed to be wide, don’t overthink the shoe.

The midfoot is locked down by a fairly normal lacing system — no bells and whistles — just seven lace holes spaced perfectly for good fit. The heel is locked in by the internal bootie, padding, and the lacing system, which comes high enough to lock the heel into the back of the shoe. As for length, I did go a half size down, something I have done in Reeboks since the first Question shoe.

The only real support structure in the shoe is the TPU split heel cup, and honestly, that’s enough. The heel cup works well with the lacing system to lock you in and the midfoot is supported by the upper. Really, the best support “piece” on the shoe is the low ride and wide base. As the shoe lands, the foot is allowed to spread or splay for better balance and grip so there is little danger of rolling over.

The midsole is structured for arch support (just right) and with an almost zero drop the shoe doesn’t allow much bend under the arch at all. While the cushioning wasn’t exactly “cushioned,” this is the place it shines; the midfoot is solid and stable, even on the edges, so there is no tipping under heavy weights or difficult landings — just a solid, supportive base that won’t give out on you.

By now, I have tested quite a few training shoes. When I started doing them, I lifted weights, I ran, and I did some other plyometric exercises, but never felt the need to change from basketball or running shoes just for that. Since I have been reviewing trainers, it makes sense; if there is a need for basketball shoes that are different from runners, then trainers for the weight room or other exercises makes sense.

The Reebok CrossFit Nano 8 is a well-rounded shoe built for the gym. The upper is supportive but flexible and the cushioning will handle anything a workout can throw at it. If you are looking for a shoe that will come back for more when the plates and bars and ropes are done, look no further.

If you need a more cushioned ride, or enjoy more cardio/running, you may want to look at the Reebok Hydrorush or Watt II (still my favorite). Otherwise, why are you still reading this? Get to work. 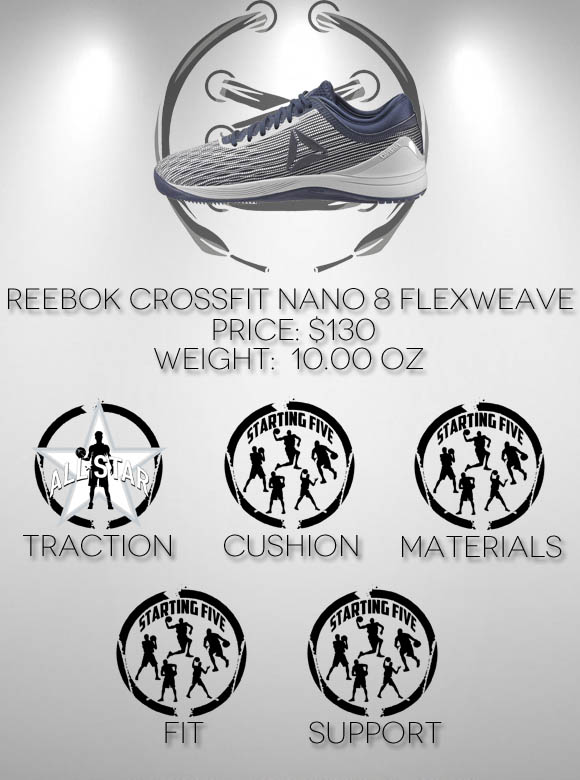