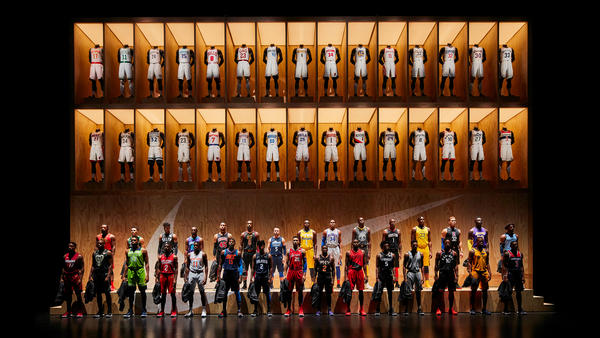 As a new era of the NBA uniform partnership with Nike begins, the sneaker giant has finally revealed its new Statement Edition uniforms.

The Statement Edition uniforms are designed, as the name indicates, to make an unique statement about a team’s spirit, and each team’s logo conveys a message. The Chicago Bulls jersey pays homage to its historic use of pinstripes, while the logo of the hometown champion Warriors represents the city of Oakland with an Oaktree.

According to Nike, the Statement Edition uniforms will be available on November 20 on nike.com/nba. Nike has been building a lot of hype on the NBA uniform collaboration, so it’s interesting to see what other uniform designs Nike will release during its first year partnership with the league. For detailed information on the new 2017-18 Nike-NBA uniforms, check out our extensive piece here.

WearTesters captain Nightwing2303 attended the event unveiling these new uniform last night and grabbed some shots of Air Jordan 32 PEs (you can check those out below).

What’s your favorite Nike jersey design so far? Do you prefer the adidas uniforms to the new Nike pieces? Let us know.

Kemba and Conley rocking PE Air Jordan 32s for the upcoming season. Expect to see Kemba switch to the Super.Fly '17 as well — he stated his favorite line to hoop in right now is the Super.Fly line. #WearTesters