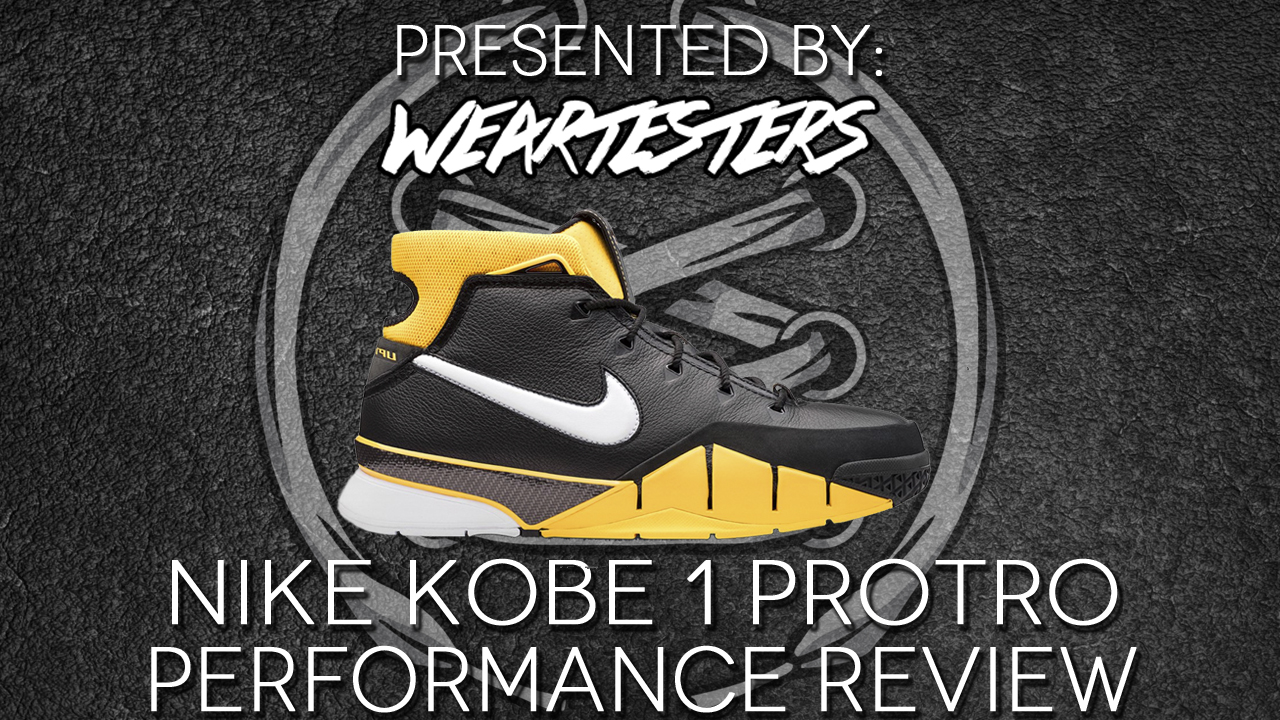 “Make the old new again” — that’s the mantra of retro product, right? Well, Nike and Kobe Bryant decided to take those words to the next level with the Zoom Kobe 1 Protro, which debuted for All-Star Weekend in Los Angeles. The original Kobe 1 was an absolute killer on court, so does the “new and improved” build match up? Here we go…

If there was a ranking higher than Hall of Fame, the Kobe 1 Protro would get it. Using the exact same pattern as the original Kobe was a great thing because it sticks like glue to any floor. Plus, it’s thick and hard enough to hoop in outdoors. The herringbone is multi-directional and spaced wide enough that dust is no issue. During one wear at 24 Hour Fitness — a four-game session of full court — I made a point to count how many times I wiped…

Two times, that’s all. That is amazing. Since the first Kobe came out over 13 years ago, this traction has been one of my favorites, and it still is. Keep your storytelling — give me herringbone.

Full-length Zoom is rarely a bad thing, right? Right, especially when it is responsive and protects from impact. The Kobe 1 Protro is both.

The Zoom unit can be felt as soon as you step down on that first wear and it only gets better as the midsole foam begins breaking in. It isn’t a LeBron 15 Max Zoom feeling — this is fast and agile, because that’s what Zoom was meant to be before it became an impact-absorbing monster.

One minor addition to the shoe that was found in the original but not in many other shoes is the Poron inserts on the bottom of the insole. Poron in a highly resilient, highly responsive urethane (usually blue) that can be placed in thin layers on the undersides of insoles — usually in the heel and forefoot — that adds a little initial impact protection without adding a ton of weight or height. The original had these as well, and for step-in comfort it can’t be beat.

This is it: leather, suede, and leather, and more suede. I won’t say this is premium leather, because it isn’t — if it was we would be paying $400 for these. This is the leather for leather-lovers that play ball, at least. It is thick and takes a couple of hard wears to break in and crease, but when it does, it forms to the foot and feels great. Durability is also a plus as the Kobe 1 Protro is built like a tank (yet hard to hit). I am still playing in my original Kobe 1 and the Kobe 1 Protro feels like it will still be playable in 13 years as well.

The medial side is made up of a nubuck that, again, feels like the best you can get at this price point for basketball. It is smooth and soft and should take a couple of wears to crease and feel right, but when it does…yeah. Carbon fiber — what appears to be real carbon fiber — comes back for the heel cup and midfoot shank, and it is so nice (more on that in Support).

The only real change on the Kobe 1 Protro as far as materials is the Pro Combat in the ankle collar and the missing leather circles that covered the ankle bones. Not a big change and neither one makes a difference in performance, so no harm, no foul.

The one area on the Kobe 1 Protro that takes some work is fit, and it all goes back to the previous category, the materials. As anyone who has played in a ton of leather shoes from the ’90s and early ’00s will tell you, most leather shoes take a couple of wears to crease and “learn” the foot. All those wrinkles mean the shoe is learning to flex and shape to your foot and activity.

The Kobe 1 Protro is no different. The leather upper is backed internally by a layer of foam that gives the shoe a bulky, disconnected feeling, at first. You can pull the laces as tight as you want but there is still a feeling of dead space in the forefoot. No worries! Just let the shoe break in and fit improves dramatically after the second or third day of playing.

Length-wise, stay true to size. Again, it may feel like you should have went a half-size down, but let the shoe break in before panicking. Heel slip is non-existent as long as you lace tight. The hole in the collar was seen as gimmicky when first released but does allow for ankle mobility while also locking the heel in and stopping movement. One note: lace behind the Shozoku logo on the tongue. It will make locking the laces down tight easier.

The Kobe 1 Protro offers serious support with tools in just about every category. Starting at the bottom, the base is wide and features a large outrigger on the lateral forefoot. Above that outrigger, we get foam teeth rising from the midsole over the side of the foot; they keep any lateral movements locked and caged so your foot doesn’t slide off the footbed on your Kobe-copying-Dirk one legged fadeaways.

In the midfoot, we get a carbon fiber shank that keeps the arch and midfoot rigid and supported. That shank ties into a carbon piece that circles around the heel cup, tying the midfoot to the back of the shoe. Let’s face it — even if your foot asks for permission, nicely, it ain’t getting out.

Moving up, the leather and nubuck upper may eventually stretch out and become a bit sloppy, but the lacing system allows the upper to be pulled tight in all directions, so even if the Kobe 1 Protro does lose a little shape over the years, just yank harder and you’re good to go.

It is only March, but the Kobe 1 Protro has the potential to be my Performer of the Year. It may be an opinion clouded in sentiment, as the Kobe I is my second favorite Kobe shoe ever (behind the VI), but there is no denying it: the Protro is a great, great, great performer.

If you can put up with a little extra weight (supposedly lighter materials were used, but these were within an ounce of the original Kobe I in my size 10.5) and a short break-in time, you will be blessed with a serious shoe. If you want light, thin, minimal, non-supportive uppers you may want to keep looking.

The Kobe 1 Protro should suit any player at any position, period, and if you wore the Kobe 1 the first time around and liked it, look no further. With more colorways soon to come, don’t miss the chance to wear the latest, greatest Nike performer — that first appeared 13 years ago. 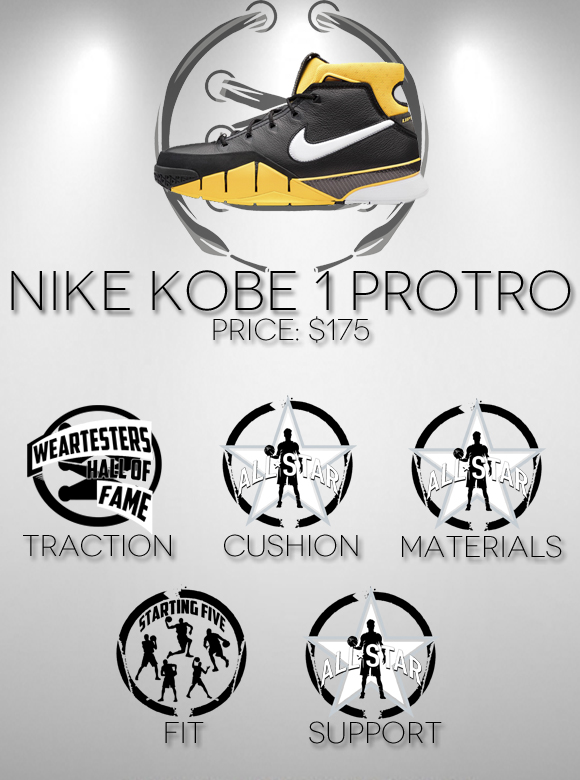