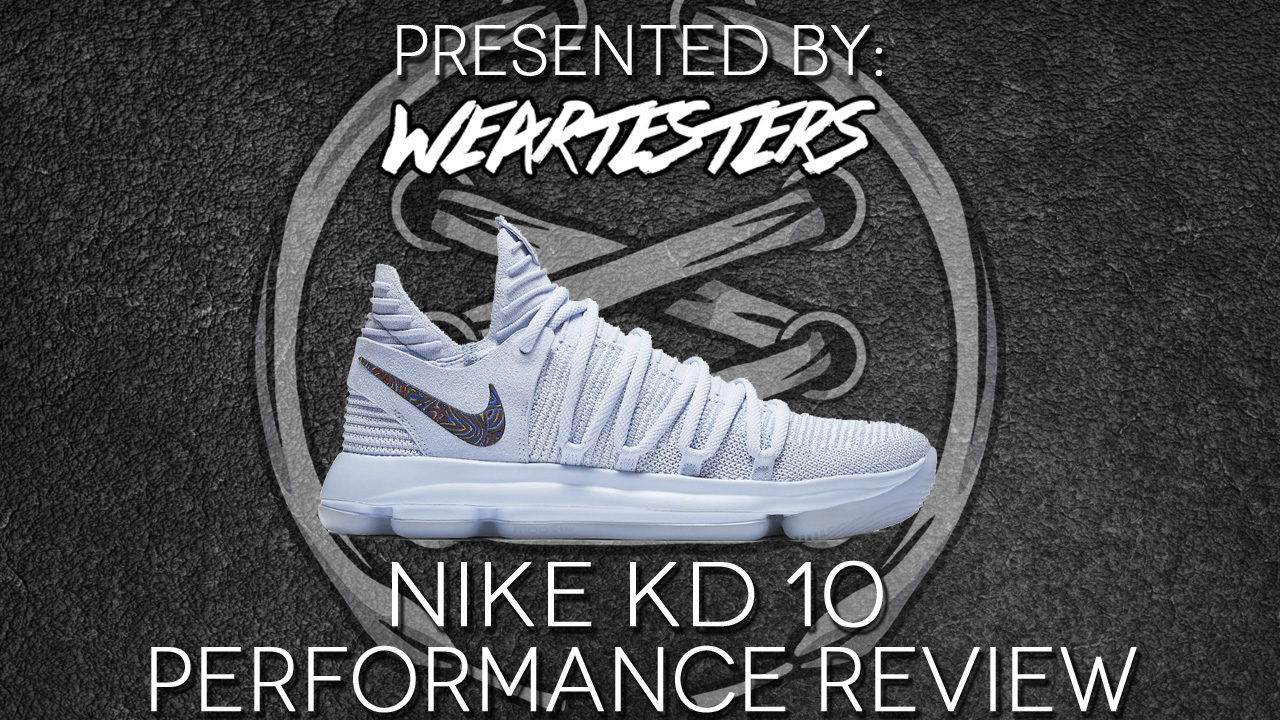 Now, the KD10 is here, and with some tweaks and turns, it looks like Nike Basketball addressed some issues the KD9 had. Or did it? Let’s go…

It’s no secret to WearTesters readers and followers that the KD9 was a favorite on this site in 2016. One of our reviewers actually picked it as the number one performer. Yes, there seemed to be some issues with the bridge between the Zoom units under the toes, bags have popped, and outsoles peeled off. But for pure performance, it was a tough shoe to beat. With this model of the KD10 we get a circular pattern based on the impact points of the foot. Nike has loved the circle as a pattern, dating back to the Air Force I/Jordan I days, and when done right, it works. The KD10 was close, so close.

I never experienced any straight slipping in moves or game play, but there wasn’t a bite — that point when your foot just grabs and stops during a change of direction or cutting. The Curry 3 was this way too; it stopped well, but it was a smooth stop and not a toe-jamming brake job.

On offense, moving toward the basket, there was no delay or problems. Running off cuts or in defensive stance felt a little slow because I was making sure the grip was there. I prefer a traction that stops on a dime and allows complete confidence in staying in front in defense and not slipping out on crossovers (kind of like Kyrie – I said kind of), but if your game is more KD — pull ups, step backs, straight ahead drives — the KD10 should work fine, which makes sense, since the shoe is his.

Oh yeah, this colorway features translucent rubber. Translucent isn’t always a bad thing, but it does tend to be softer than solid rubber. Same here, because I would not recommend these for rough courts. The outsole is soft and will wear down, leaving you literally playing on Air. 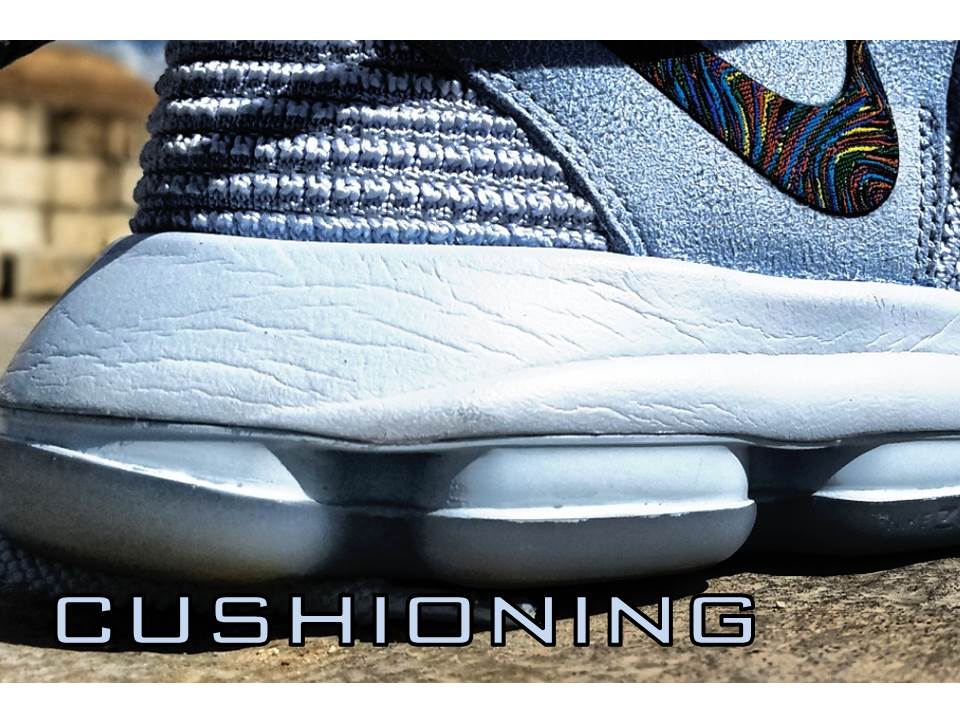 The best thing about the last three KD models? Lovely, segmented, full-length Max Zoom Air. Not much changed from the 9, so here goes: this is the way Zoom should feel, all day, every day. Some shoes aren’t built to handle this much Air, but oh well. Controlled bounce is the accurate description — for the KD9. The KD10? The bounce went away.

Don’t get frowny-faced because the impact protection is still there and works great, the transition is still smooth and flows, and the response is quick. It just doesn’t have that springy feel of the 9, which for some also brought a feeling of instability. With that bounce lessened, the KD10 is a much more stable ride, especially in the forefoot. Impact protection, for that reason, may even be a little better in the KD10, with that added stability making off-balance landings feel a little safer underfoot. Overall, bad knees, bad ankles, bad back — nothing was hurting after playing four to five full court games a day, but that special bounce was missed. 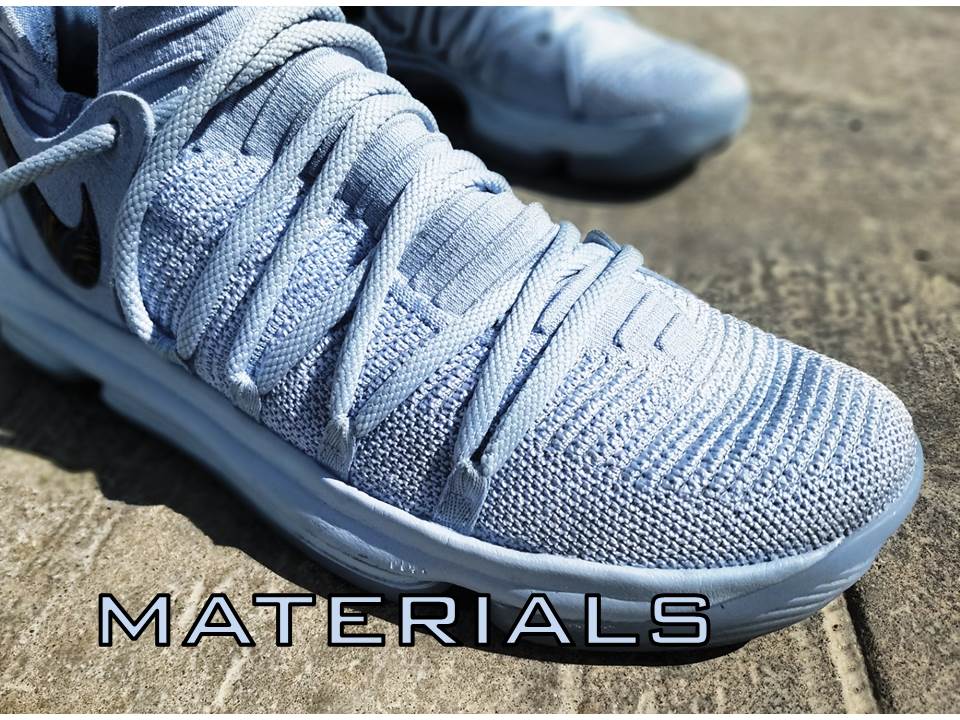 The knit in high-stress areas should be a little tighter, especially with a lacing system like the 10, to help with lateral stability and support (more on that later). The tongue area is a stretchier knit pattern, letting even semi-wide footers enjoy the shoe (really wide are out of luck here). No nylon backing in the forefoot, no mesh areas around the heel, just pure, unadulterated, lovely yarn.

Thick sculpted padding rounds out the inside of the heel area to keep the lockdown going and provides a nice and soft alternative to the heel counter rubbing through the ‘Knit. Overall, this is the best use of Flyknit in basketball, ever.

The heel area takes it back to the old school with a sueded strap wrapping up over the last loop, tying the heel and foot into the shoe with a little more stiffness and stability. It isn’t crazy structured, it’s just enough to feel a little more secure. One note: the Swoosh has been coming off of some pairs, mine included, so maybe wait until later colorways to see if that is fixed. The one area that is, without a doubt, vastly improved from the KD9 is the fit. The 9 was a slim water ski with laces and it seemed to be the main debatable point of any shoe last year. Even us WearTesters had some issues with trying to recommend sizing (some stayed true, some went up a half size, some went down a half size). The KD10 widens the last in the forefoot, and by using softer Flyknit, the shoe is easier to get on and wear for all foot shapes.

The containment is not as strong due to these factors, but the rope lacing tries hard to bridge the gap. Extremely wide-footers will probably still have not get an invitation to the party, but normal width people will wear pointy hats and eat cake.

The fit in the rest of the shoe is almost perfect. The lacing system really does pull the shoe tight, but watch out — too tight and the pain is real, especially in the arch area. The straps pull up from the midsole and cut right into the foot, so after a couple of games you will feel some hurt in that area. No worries, loosen them up and go. The KD10, much like the KD9, doesn’t need to be laced straight-jacket tight to achieve lockdown. The heel has a thick area of padding just below the top line of the ankle, wrapping the foot in and stopping any sliding up and down.

As for length, again, I like about a thumb’s width at the end of my shoes (about a half-inch), and TTS fit me perfect. A half-size down, with the softer toebox, would work great if you want no room in the end, but the reports of a whole size down? Crazy. Stay TTS or at the most half down. 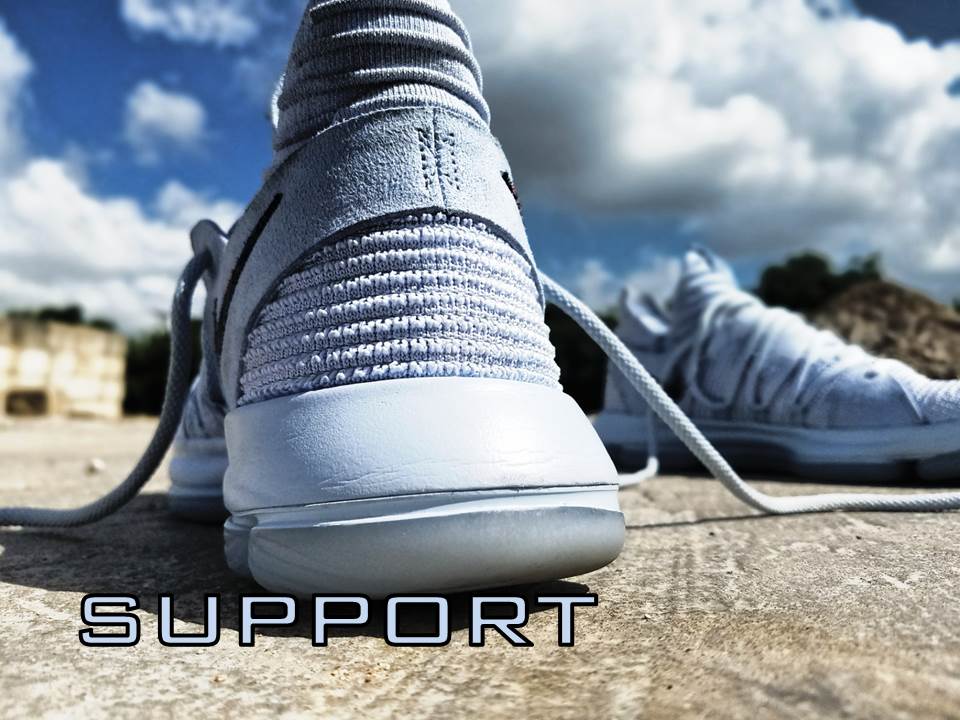 Well, the cushioning is fantastic. However, the support is adequate. There are no serious structures to prevent rollover, no straps or chains or bridge cables, just a good fit, wide base, and solid heel counter.

If you get the right size then support will get you through your games just fine, unless you have some ailments that require more. The Zoom being less bouncy definitely makes landings more stable — off-center rebounds were held up and pushed back upright, while lateral movements were smoother without the Zoom deforming as much and rebounding.

The midfoot arch area is slightly higher than a normal shoe but not so much to cause pain; it’s just enough to keep your foot from pronating and hurting yourself. The heel counter is real, and the lacing system coupled with the heel saddle (the suede part) pull you into the shoe and give the KD10 a feeling of riding lower than it does.

The one thing the KD10 needs is the midsole sidewalls to come up over the foot a bit. The knit is just too soft for proper containment from the upper, and the laces are strong, but if the midsole wrapped up along the sides to give the foot a starting block man, that would be golden. 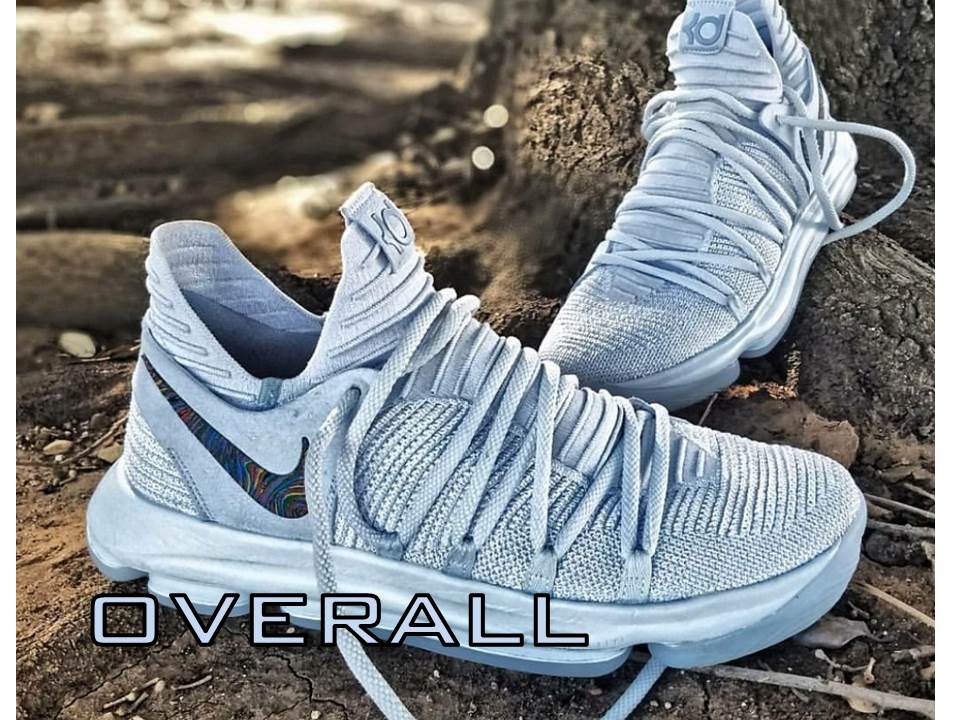 This is tough. There were such minor changes to my favorite shoe of 2016, but those changes affected the play in a major way. The Zoom is toned down, for good and bad. The materials are definitely improved, unless you like a tighter knit for containment. The looks — let’s face it, this is a beautiful shoe. But the traction slid a little (see it?) and the overall playability seemed a step back from the KD9.

If you enjoyed the 9, definitely try the 10, because it is an incredibly responsive and cushioned ride that uses Flyknit like it should be used, with a great fit to boot. If you are a super-quick guard that needs killer traction, well, it might work for you, but if it doesn’t, we told you so. If you are a player like KD — smooth, scoring from anywhere, can D up positions 1-5, the KD10 could be perfect.

Overall, the small changes are appreciated. Too many times we have seen a great technology, like the segmented Zoom here, be used for a year or season and get scrapped. This stuff is magic, once they get the bridge tearing problem fixed. Remember — evolution, not revolution. And on KD’s feet, it will be televised.

You can find the Nike KD 10 now at Eastbay.com 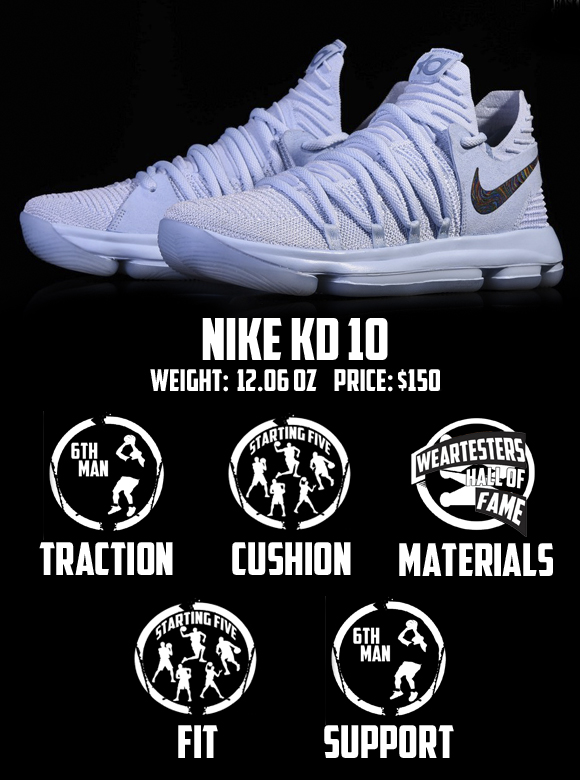