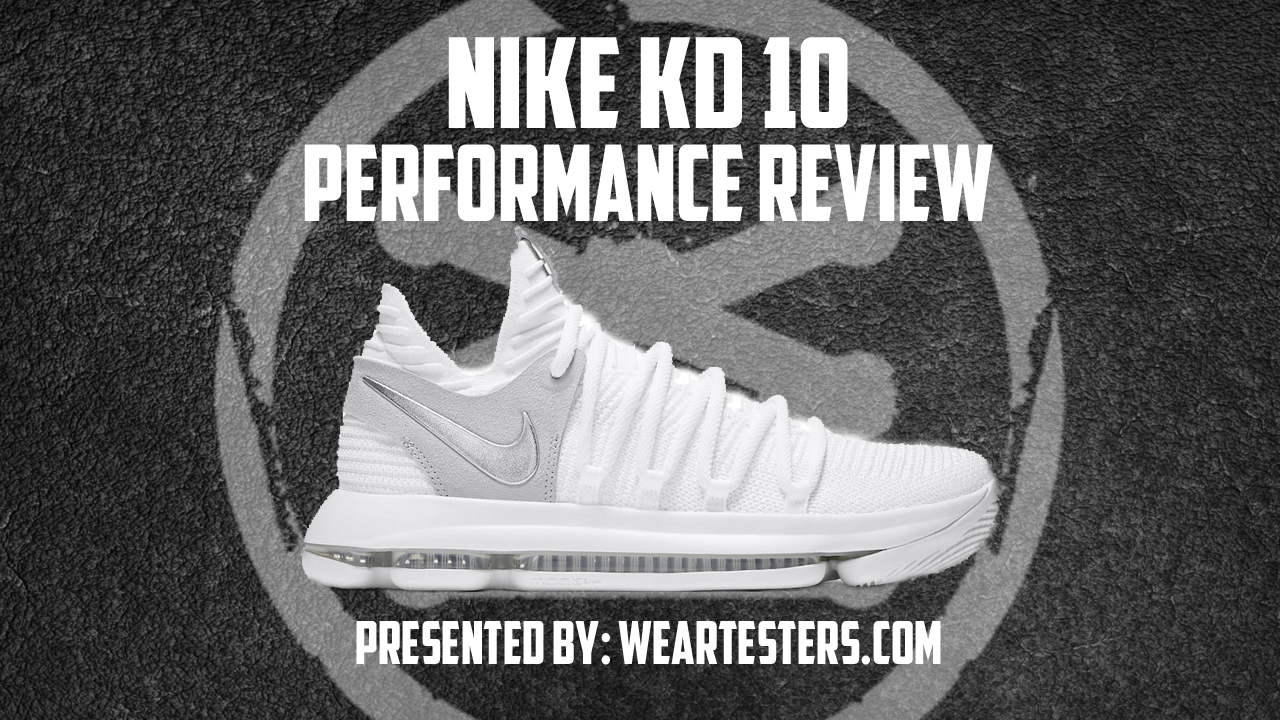 There were mixed feelings surrounding the aesthetics of the Nike Zoom KD10. Some people are calling it the KD9.5, while others were hoping for more of a complete overhaul in design.

We are much more interested in how the new signature performs on-court. Does it stack up against its predecessor? Nightwing and I got our pairs at the same time so we’re here to find out… 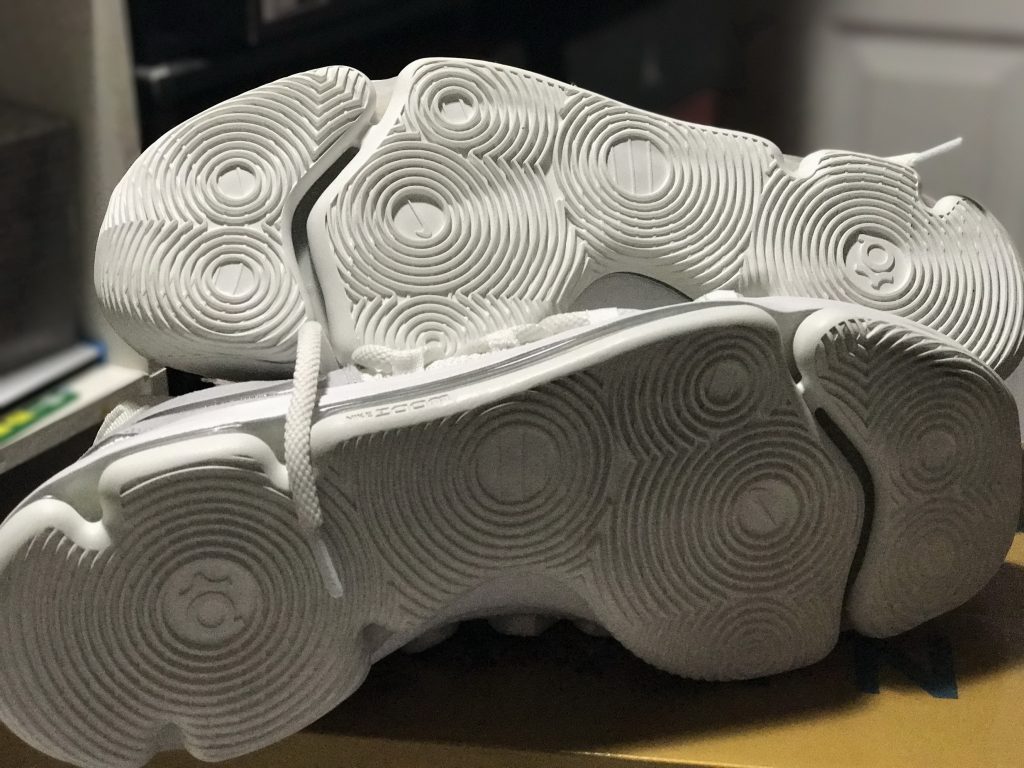 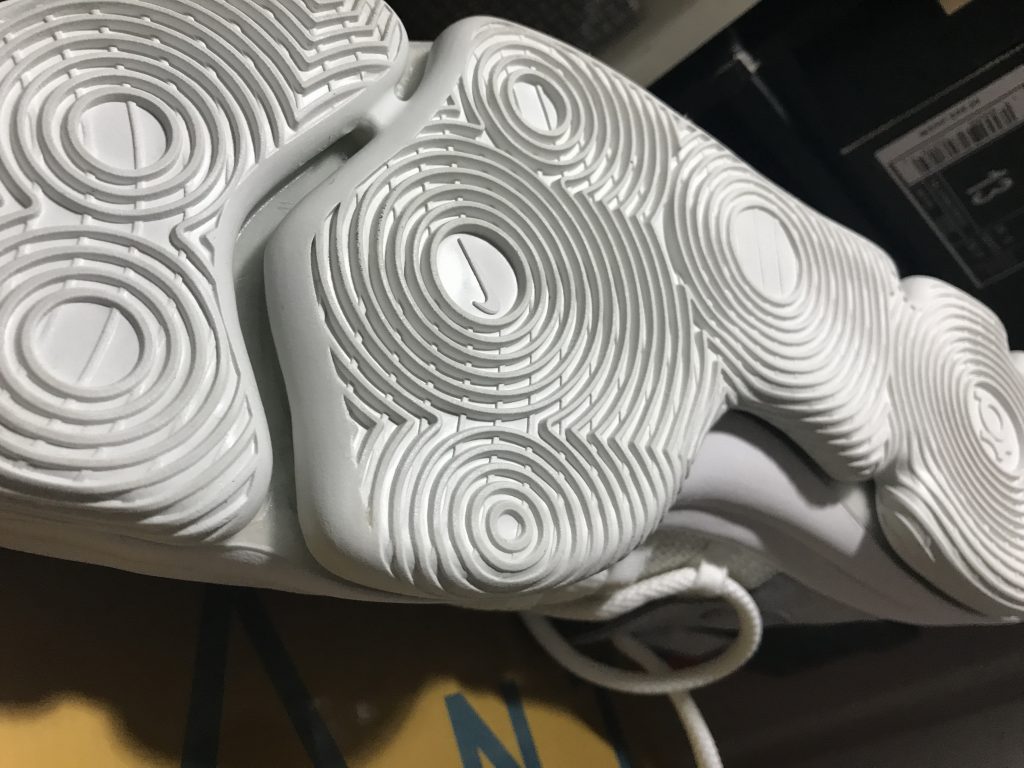 Traction – Here, there’s a solid white rubber outsole that utilizes a circular pattern, similar to what we had seen on the Kobe 9 and Kobe 9 Elite. It’s definitely departure from the awesome honeycomb pattern utilized in the KD9, and it didn’t work quite as well.

While the outsole design did provide multi-directional coverage, the grooves picked up dust — especially on the forefoot and heel points. I’m not saying I was moving like a hockey player, but this was a step back from the 10’s predecessor.

Depending on the court you play on, the outsole can make or break you. Dusty courts: be advised that you’ll be wiping heavily as the rounded base area picks up dust — particularly along the forefoot and the heel (for me). If you play on a well-kept court, you shouldn’t have any issues.

Outdoors, the traction worked exceptionally, however, the outsole grooves will wear down quite quickly. Consistency is key — and this shoe didn’t have that. 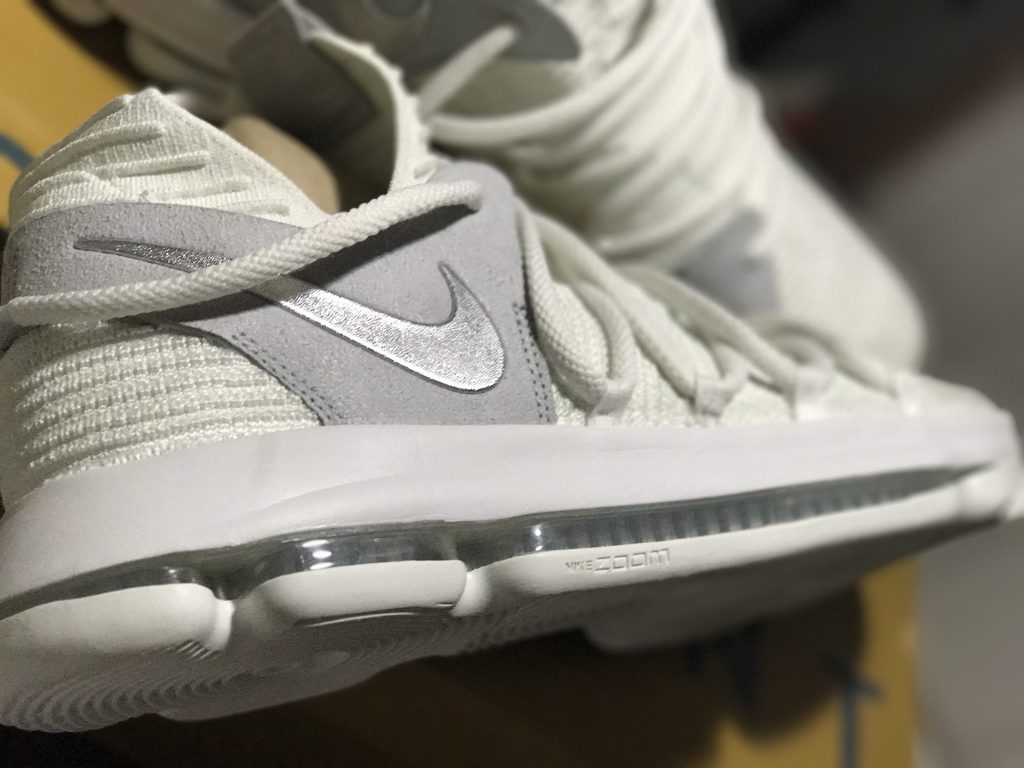 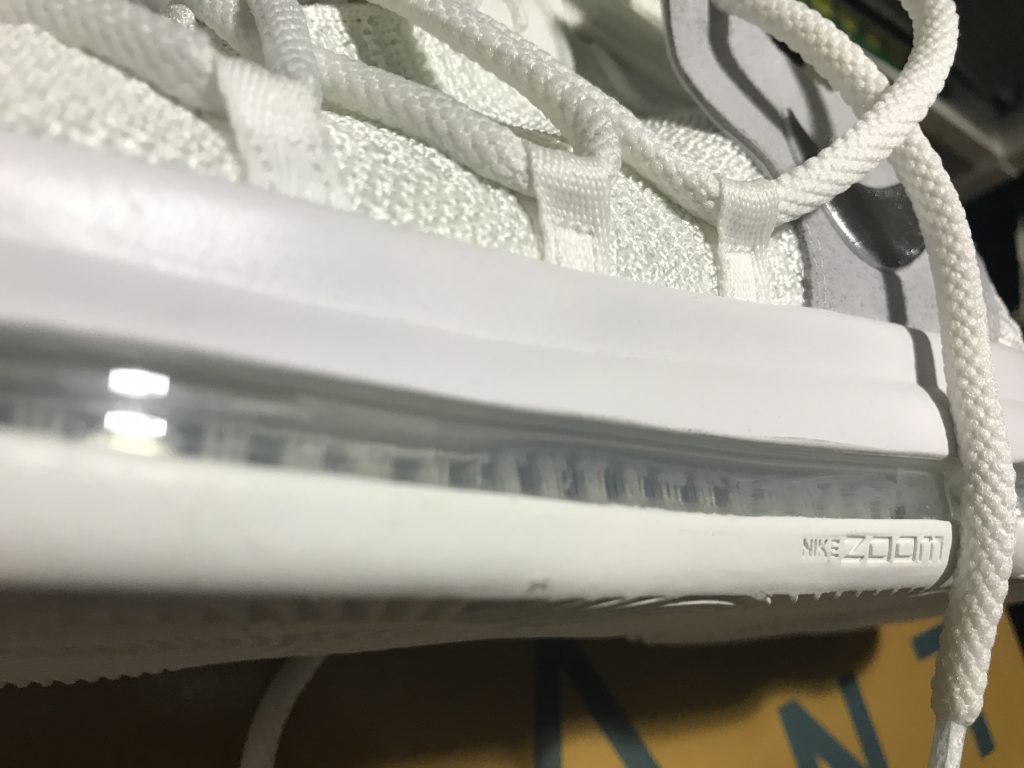 Cushion – Full-length Articulated Max Zoom Air. These cloud 9s took time getting used to compared to the KD9 — probably due to the PSI of the cushion set up. The re-adjustment of the PSI level was probably done to prevent the now well-known issue of the Zoom Air bag popping; that problem has occurred with many consumers including myself.

With its modified setup, the ride was responsive without taking away from court feel. There is plenty of impact protection and I actually found this setup to be more fluid in motion with my footwork. The KD10 is one of the more versatile shoes to date; it can be worn by guards and bigger players.

Even though I play as a big man, the cushion was firm at first but broke in to find its groove; it provided enough responsiveness without hindering my cat-like reflexes (chuckles). 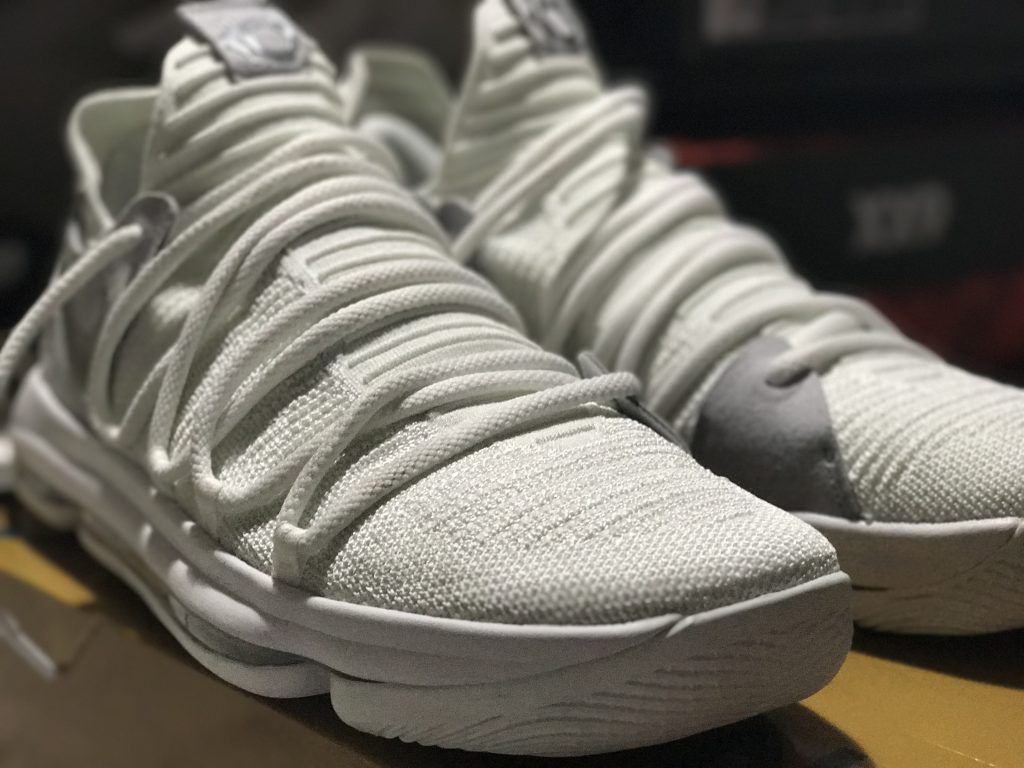 Materials – Flyknit. Knit materials are everything when done correctly and here, from heel to forefoot, it’s Flyknit errrry-thang! There were some adjustments to get used to because all the lockdown comes from the unique lacing setup.

The heel and midfoot to forefoot area were Fyknit-infused with heated TPU for added durability. The midfoot to the top of the foot gets soft Fyknit and it felt much better on-foot; it made it much easier to put on the shoe — especially coming from the struggle that was putting on the Nike KD9.

A strategic lacing setup helps with locking down the foot. The shoe is comprised of a Phylon midsole backed by the ever-so-comfy unlocked and articulated Zoom Air unit that sits atop a solid rubber outsole. 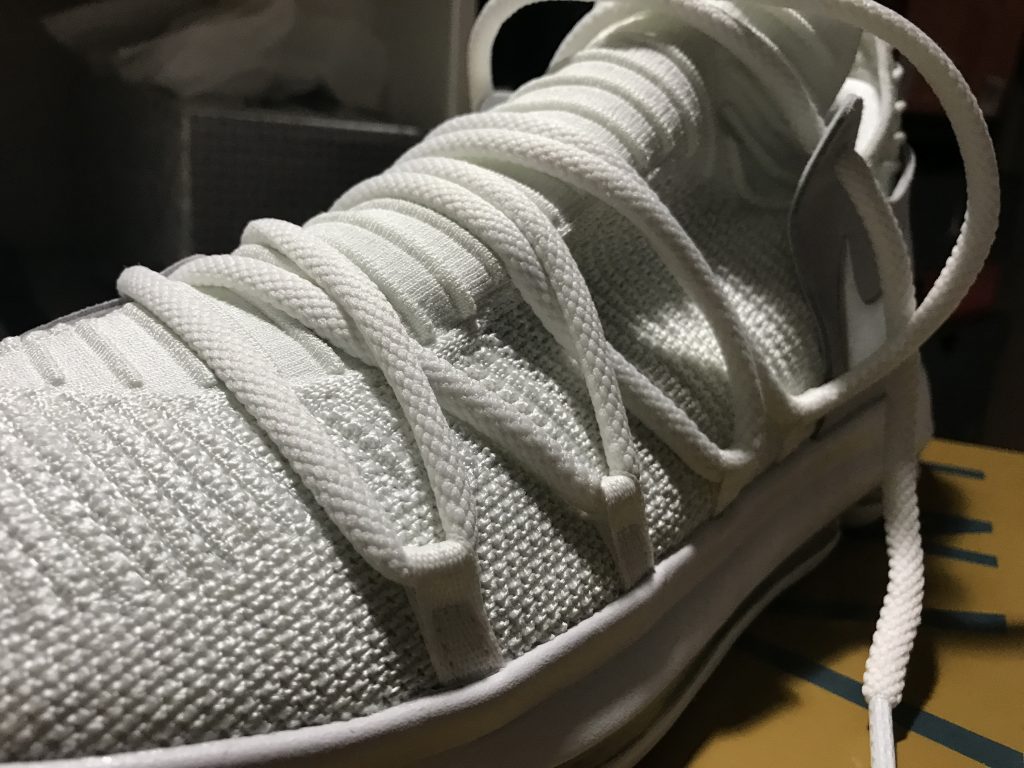 Fit – Wide-footers rejoice! This is a Durant shoe where my feet don’t scream for help. For those who have slightly more narrow feet or prefer a snug fit, I do suggest going a 1/2 size down. The containment was adequate for the position I play. However, for players that execute more intense movements on-court, you all might want tread lightly on the waters.

The shoe seems made for back and forth movement because intense lateral cuts and heavy rotations on-court may cause some instabilities. The lacing setup keeps you locked in, but the Fyknit (reinforced with TPU) and that strategic lacing setup are the only things holding you down onto the footbed — some players may prefer a more traditional lockdown system.

Again, the fit of the shoe is fine. It’s the reinforced points of the shoe that lack consistency — especially after I ripped a lace loop. 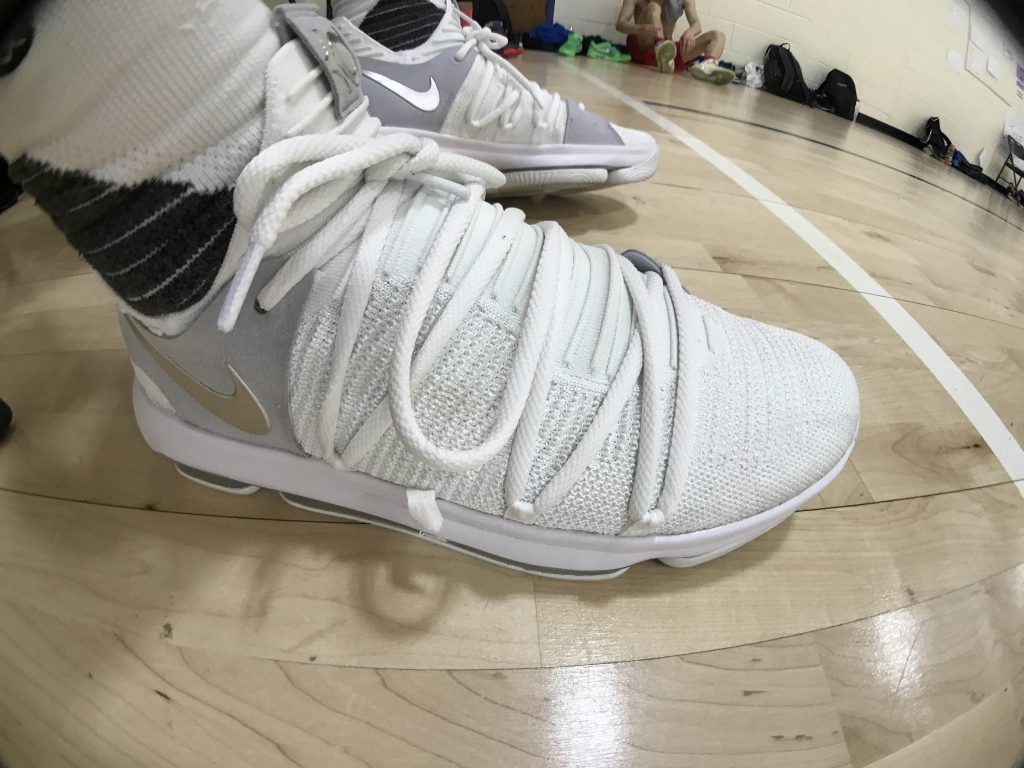 Support – The support definitely comes from the fit of the KD10 — as long of parts of it don’t break. I had an issue with the shoe: one of my lace loops ripped. I am not saying this is going to happen to all players or consumers because I’m currently the exception.

I did get the nylon lace loop stitched up because I needed to be able to provide our readers with a finished performance review from a big-man WearTesters standpoint. I appreciate those who reached out with their concerns. This rip could have been caused by a possible construction or manufacturing flaw. Something as simple as reinforcement with Flywire or fuse rands (much like the KD9 Elite) would have made the lace loop integration much more durable.

Besides for that mishap, the containment was decent, and the extra padding along the heel area paired nicely with the soft Flyknit along the tongue and heel. The nubuck accents at the medial side of the first lace loop (and also the top wing loops) are strategically placed to keep your foot contained and locked in upon lacing. 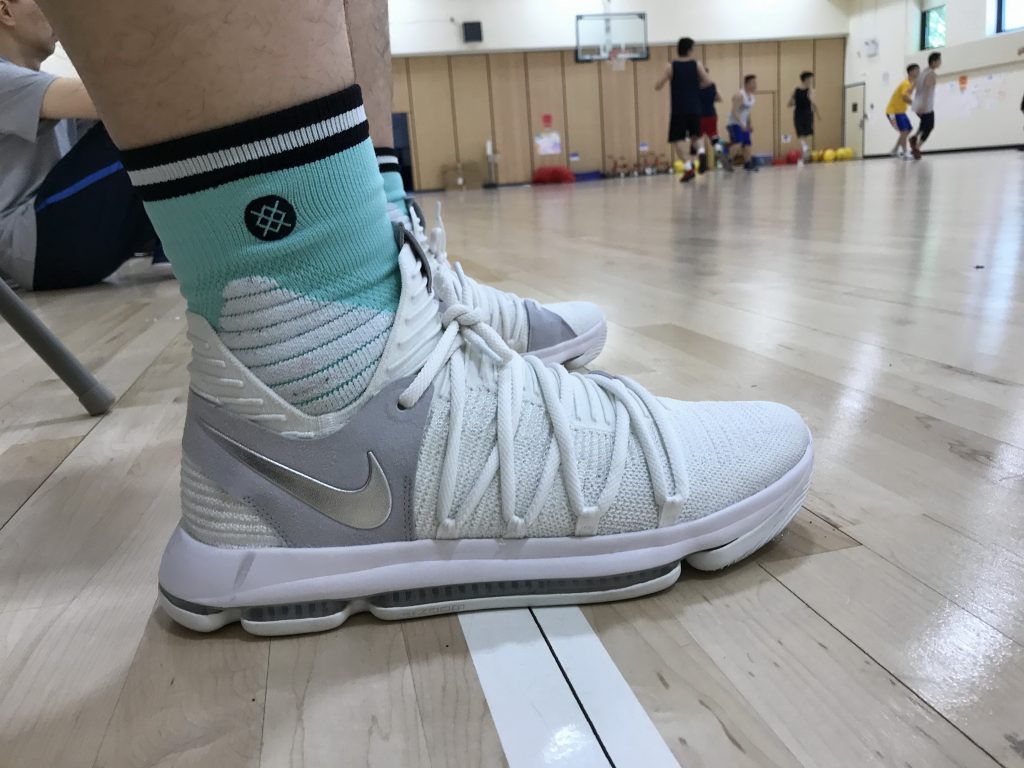 Overall – Visually, we were expecting something completely different in terms of design — I guess the KD10 was more evolution than revolution. I wasn’t sure what to expect from the 10, coming from the 9. While the upper, especially the soft Flyknit material along the top of the foot, stood out, the cushion didn’t disappoint either and I really enjoyed it.

If you’re more of a spot-up shooter or stick down on the block, this shoe will work well for you. However, if you’re the type of player running off back-end cuts, and you employ a lot of lateral movement, than you may want to reconsider picking up the KD10.

The KD10 just misses being a great shoe due to minor flaws in construction and traction — but they don’t deter it from being a good performance shoe. Perhaps upcoming colorways will fix those issues because this shoe was fun to play in. I hope the Elite model — or the KD XI — will do better, but the KD10 was no slouch. 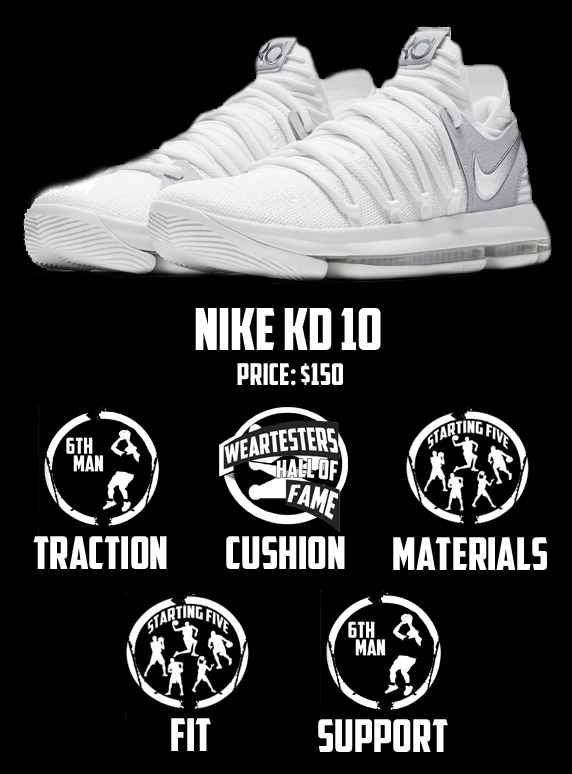