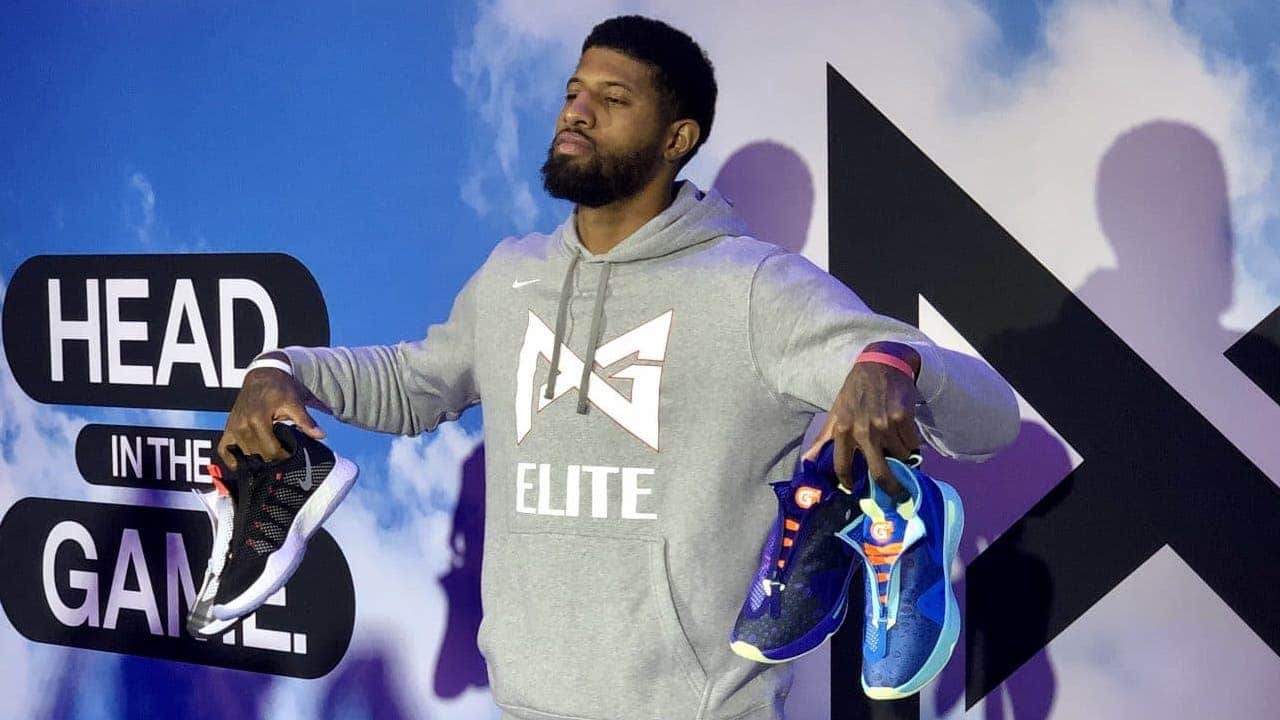 Among the skyscrapers of downtown Los Angeles, I found myself at the Trinity Auditorium. An inconspicuous building that was previously a church. This was the scene as Nike Basketball invited media to help LA Clippers all-star Paul George launch his new signature shoe, the Nike PG4.

When PG13 first debuted the sneakers (playing in a game versus the Knicks on Jan. 5) there was plenty of chatter online over its design. Perhaps it was an over reaction? More on that later.

Inside the cathedral with stain-glassed windows was a full court. Four colorways of the sneaker were on display and we played in the purple Gatorade “Gx” version.

First impressions: The toe box was definitely tight. I saw a few people asking to go up ½ a size. For clarity, I wear size 12 so my options were limited. After running around for 20 minutes my feet adjusted and felt fine. The traction was solid as I didn’t experience any slipping.

Buy the PG4 at Nike

The biggest question was the lacing and zippering system, which initially reminded me of Gary Payton’s Air Zoom Flight ’98 model. I laced them up traditionally and left the zipper down. The shroud was more a fashion statement, giving players the option. Later I zipped them up fully, which made the upper feel snug. Using breathable materials was smart, keeping it lightweight and transparent.

Whether you like to cruise with the top down or play faster zipped up, the shoe performed well and exceeded expectations.

After testing the PG4, I spoke with the man himself, Paul George. Discussing the new Air Strobel cushioning, he shared his thoughts from playing in them.

“You know what? It was new to me with its innovation. I knew it was going away from what we were doing with the air bag. I’m all about innovation and what’s best going forward with my line. So far so good, when I felt it, I was all for it, if it made for a better performance of the shoe,” George said.

We talked about the different types of sneakers he wore before his signature line was unveiled, from his high school days all the way to the pros.

“In high school I wore LeBron’s, Kobe’s. In college I wore Kobe’s and Jordan’s. Earlier in the league I wore everything from Jordan’s to Kobe’s to LeBron’s to Foamposites, I wore it all,” he said.

Coming back home, playing for the LA Clippers, and being from Palmdale, I asked PG what it was like giving back to his community and refurbishing the courts he grew up on.

“That’s everything, that’s the reason I came back home and why I do what I do. To be able to inspire the next generation to ultimately help the community that raised me and got me to where I am. It’s a surreal thing to play and represent my home,” he said.

The city of Los Angeles is bubbling over its two NBA teams doing well. I wanted to know if he felt a rivalry starting to build between his cross hall neighbors.

“I think its more so for the fans. The Clippers haven’t won anything, and the Lakers have all the hardware and all the accolades. We’re trying to get there, to be great. When you look at it from a competitive sports aspect there’s no rivalry there. Ultimately, we want to beat them, they want to beat us. What team doesn’t? From the fan aspect there’s a rivalry, we hear it all the time. It’s fun, it plays into the story.”

Collaborations are always a hot topic with kicks, so I inquired if there were other projects lined up for the season.

“I’m going to keep that on the lowkey. But honestly, we have some amazing colorways, dope colorways coming up. This is the pop to start it off, but everyone knows my line, there’s going to be stuff sprinkled in there to keep it interesting. I’m excited for people to see what else we have in store,” said George.

His first PE color on court was red, white and blue to match the Clippers home uniform. It also had me thinking about the Summer Olympics. I asked PG if he’s put any thought into playing again for Team USA?

“Yeah, that’s always on my to-do list. Hopefully I can finish this year out healthy, hopefully we succeed going far, and win it all. I’ll address that when the time comes but definitely my goal is to play and represent my country this summer,” he concluded.

Also, on hand for the event was Nike Basketball designer Tony Hardman. We spoke about PG’s line and what makes this new version different in multiple ways.

How long does it take from ideation to roll out of PG’s signature shoe?

“Usually it takes about two years. The 5 is coming out in a year, so we’ve been working on that for a year already, and now starting on the 6,” Hardman said.

Social media went crazy when George debuted the new kicks, especially over the zippered shroud. Was that collaborative or did he want that included?

“That was more of something we pitched to him, we went through some variations and thought about what would stand out. We thought more additive, what are we going to add to it to make it stand out. We thought about the landscape of all the shoes we already have and the landscape in footwear. Let’s go the other way, make his shoe stand out, make it super clean, aerodynamic. He wanted to be faster, so it felt like the right thing to have no distractions. It didn’t start as a zipper, more of a velcro closure but it wasn’t quite working the way we wanted to, so we went with the zip up. It worked, functioned great, and easier to get on,” he said.

Let’s talk about the cushioning, the Air Strobel. Is this a first gen model being used?

“Yes, he’s going to lead this innovation. Something that the team has been working on for a while. When we first tried it in a factory in Asia, the minute I put it on I said ‘We have to get this for Paul’ and pushed for it. He’s going to launch it and then probably see it in feature products of Nike as well,” shared Hardman.

Can you tease any future colorways this season? Anything special in line for the All-Star Game or other collabs?

“He will have a special collab for the ASG, I can’t really say what it is. There’s going to be some unexpected things we do with the shoe. There’s no plans for a 4.5 or anything like that, but I think that we refresh it, and that will bring the kind of energy to it,” he said.

The turquoise Gatorade “Gx” model will be available to gamers who unlock it playing NBA2K later this season. A plaid color that was on display currently does not have a release date.

Buy the PG4 at Nike