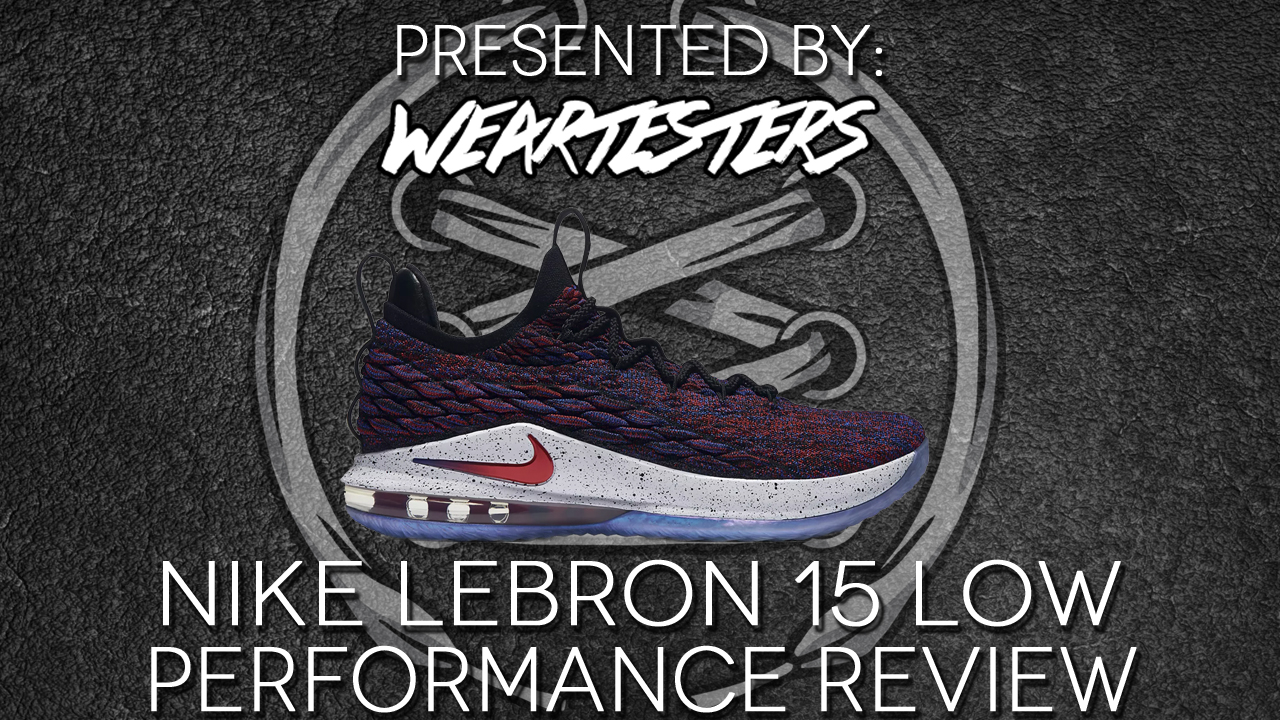 For years, the LeBron signature line lowtop model has released and immediately been looked over as a performance let-down — and for the most part, they were. However, the LeBron 15 Low has arrived, and for once, it just may be better than the original. Let’s ride…

The LeBron 15 Low uses the same cleat-like turf-gripping pattern that worked great going forward and back on the LeBron 15, with one minor change: the pattern is turned about 30-degrees, and that makes all the difference between a serviceable pattern and a really good pattern.

The LeBron 15 Low has good grip running and stopping going forward, but there is now noticeable stopping power while playing laterally. While trying to stay in front of my man on defense (gets harder every game) I had no issues with any slipping out or pushing off to change direction unless the court had hairballs and dust bunnies all over it — which is not uncommon at the three 24-Hour Fitness courts I play at. It’s amazing that this change in performance wasn’t noticed when developing the regular LeBron 15 but thankfully Nike got it right on the Low.

As for outdoor use, it’s possible. The rubber is thick and is a little harder in durometer than most on the market, but it is still softer than most outdoor-specific shoes you may be used to. The points and peaks will probably wear off and lose all bite within a few wears, but overall, the LeBron 15 Low may work fine for a few months.

While the LeBron 15 relied on the serious bounce and response of articulated Max Zoom, the LeBron 15 Low uses a 180-degree heel Air Max unit and an oval forefoot Zoom Air unit. The first thing that I noticed was a lower ride, which, as a guard who relies on whatever lateral quickness is left in the tank, was a welcome sight.

The high top was definitely springier and had better impact protection overall, but the LeBron 15 Low is nothing to laugh at. The forefoot Zoom is responsive and quick, as well as a feature that seems like a problem at first: the curved outsole. The Zoom unit is set behind the curve, which means that as you land the impact and response come at you first, then the foot rolls into the next step smoothly and toe-off feels natural. Some of the oval Zoom setups can feel stiff and slappy, but not the LeBron 15 Low.

The heel Air Max could have easily been the same Max Zoom as the high, and honestly, it should have been. There were a couple of times, when planting for jumpers or stopping on drives to change direction, that the heel unit rolled over on me. Instability on heel landings is a common problem when cushioning is too soft.

In one instance, I had a one-on-three break (no one ran with me) so I planted on the right wing to square up for a 3-point jumper. As I planted the outside (right) foot to square, the Air unit rolled and I didn’t get a clean jump, missing the shot. If I was a purely forefoot player this wouldn’t be an issue, but I’m not, so it was.

The materials used on the LeBron 15 Low are the same as what’s used on the high — Battleknit across the upper with Flywire lacing and a stretch knit collar. The knit is soft in all the right spots (around the tongue area, the midfoot) and stronger and tighter in the high stress areas around the forefoot and heel. There is a liner in those areas as well, so the true knit feeling isn’t there, but for an athlete like LeBron (or any heavy-footed or bigger player) the backing is necessary.

The ankle and tongue tabs are still a nice synthetic leather (some colors may use real leather) and add a touch of luxury to a ball shoe. The Flywire does actually work and you can feel it pull the upper around the foot. Honestly, that’s about it — the shoe has a simple construction and a good look.

The fit on the high was debatable — I have a pair in both my true size 10.5 and a half down to a 10. The 10 is definitely more form-fitting, but the 10.5 doesn’t kill me with extra space either. On the LeBron 15 Low it’s the same; I went with my true 10.5 but felt like a 10 would work also. Again, the room in the 10.5 isn’t an issue when playing, but you feel more of the knit-stretch and the hug of the shoe in the smaller size.

The LeBron 15 Low does a fantastic job with heel lockdown, something lows have had an issue with for years. The knit collar, internal counter, and heel padding allow no movement — especially when laced tight for playing. The Flywire pulls the foot back into the heel and the high heel tab, with thick padding, locks it down.

The lacing system is actually the same one used in the high top, which shows the high was really a LeBron 15 Low in disguise (we all knew that though, right?). As for wide footers, most should be fine. I am slightly-wide but not enough to size up in most shoes. The LeBron 15 Low allows a little stretch around the foot but if you are extremely wide you may need a half up or to try these on.

On the high top version lateral stability was a little…off. Most knew it was due to the high-riding midsole with an uncaged cushioning system (no stiffer foam surrounding the softer padding). The solution in most of the public’s eyes was to add an outrigger. Guess what? The LeBron 15 Low has an outrigger — and it is better.

More than the outrigger, though, the midsole foam provides a stiffer, lower ride, which naturally leads to a more controlled system. Don’t get me wrong — the outrigger helps, but the foam is the bigger plus. This would normally mean the cushioning is sacrificed, but as we covered above, the forefoot Zoom still provides responsive bounce and a smooth ride.

The heel area is Air Max and if any cushion can be considered unstable, this is it. To put Air Max on a knitted low makes the ride questionable to start. Fortunately, the heel lockdown is better than the previous LeBron lows that used the Max heel, so even though the unit is soft on the edges, the heel lockdown takes away most of the insecurity while playing.

Even so, there were times I would come off a screen and feel my foot roll over the Max unit — not to the point of injury, but enough that I either had to gather and then jump or I didn’t get fully squared around on my jump, missing the shot. Driving the lane was also fine going straight in, but if a hard plant laterally led into a jump, a roll could be felt — but not every time. It was frustrating because if it happened every time the LeBron 15 Low would be easy to throw in the closet. Most of the time, it’s great, so the shoe is fun to wear. Then, you feel it, and want to give up.

The LeBron 15 Low is such an improvement over the past years’ lowtop models that it really isn’t fair to compare them. The last five years have felt like the low was just to say there was one — and so you could have an LBJ logo on your summer shoe.

The LeBron 15 Low feels like a game shoe, an actual design for playing that is close to the normal shoe but just different enough to warrant a new release. The shoe feels more guard-oriented, with a lower ride and stiffer cushioning for a fast game — especially with the curved forefoot and the transition it provides. If you are a lighter player that never bought LeBron’s because of the boot-like fit and feel, here you go. Even for heavier players that didn’t like the higher midsole, the LeBron 15 Low is a find.

The first three models of the LeBron line had lows that were completely playable and looked promising for summers, but with the rise of the LeBron Soldier line the performance of the lows went by the wayside. With the LeBron 15 Low performance returns — and the summer may be a little hotter, at least on-foot. 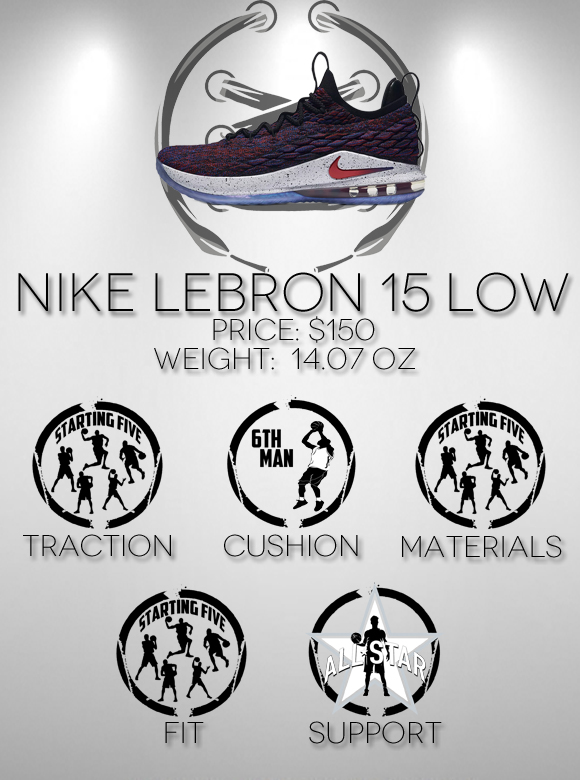