Nike mashed Kyrie Irving’s first three shoes together to create the S1 Hybrid and we’ve got the performance review.

Traction – It isn’t often that we get the opportunity to go back and test a shoe years after its release, but that’s what it felt like I was doing with the Nike Kyrie S1 Hybrid.

The shoe features the Kyrie 1’s tooling so traction is identical. However, my experience was not. I remember the original Kyrie 1 having pretty good grip on-court — a few wipes here and there, but nothing crazy.

I’m not sure if the floors I play on are dirtier now than they’ve ever been but the traction this time around was pretty slippery more often than not. When I’d slip, I would eventually stop, allowing me to continue moving in whichever direction. But I felt I was skidding into my direction change rather than just changing direction without a second thought. Keeping the soles on the S1 Hybrid clean and debris free will be a necessary habit during your time on the floor.

The traction wasn’t deal breaker bad, but it definitely made me appreciate what I experienced in the Kyrie 2, 3, and 4.

Cushion – Like the traction, my experience the second time around wavers a bit from my first.

The rectangle forefoot Zoom Air and Phylon midsole combination is no different than it was on the Kyrie 1, but I didn’t mind this setup this time around. While the cushion isn’t mind blowing or spectacular, it’s good enough and, at the least, features Zoom Air in the forefoot where it benefits me the most.

It’s definitely better than what I experienced in the Kyrie 2 and 3, but playing in the Kyrie 1s tooling once again only reinforced my love for the Kyrie 4’s Cushlon and heel Zoom Air combination.

Materials – When I initially had the shoe in-hand I liked the front half of the materials. However, the rear canvas wasn’t quite the material that I enjoyed from the rear of the Nike Kyrie 2. However, after breaking in the S1 Hybrid I wound up really enjoying how everything felt and played together.

The mesh up front was just as light and flexible as it was on the Kyrie 3, and Nike kept my favorite part of the setup: the little flex zone featuring the stretch mesh material.

Fuse is used sparingly (thankfully) at the toe and it does its job of protecting the softer mesh that resides beneath it. Meanwhile, the stiff-to-start canvas at the rear broke in to the point where it retained its rigidity for support/containment but felt like it had molded to my foot like a mesh would.

The strap worked well and ensured my heel was locked into place, even though I feel the shoe would have been fine had the brand left that feature off the shoe entirely.

Fit – The shoe fits true to size, but like every Kyrie in the past, it is a bit narrow. If you’re a wide footer then going up 1/2 size may be necessary.

The overall fit and lockdown are a perfect blend between the Kyrie 2 and 3. I loved the way the Kyrie 3 felt and fit whereas I wasn’t as happy with the midfoot and forefoot section of the Kyrie 2 due to the stiff plastic fuse upper — but the rear of the Kyrie 2 felt awesome.

By taking the forefoot of the Kyrie 3, Nike was able to add some much needed flexibility to the forefoot while still retaining the heel lockdown from the Kyrie 2. This is an awesome setup and I really enjoyed how well the S1 Hybrid fit my foot.

Support – Nothing special, but the S1 Hybrid has everything you need. The midfoot torsional shank plate is housed within the midsole while the heel offers a very rigid external heel counter that does a fantastic job of keeping your heel on the footbed.

The shoe’s tooling is flat which helps promote stability, however, I would have liked the forefoot to be slightly wider than it currently is. This is something that wouldn’t be possible since Nike took the tooling from the Kyrie 1 and just placed it on this model, but if there were something I’d have changed that would have been it.

Overall – I was surprised with how much I enjoyed the shoe on-court — besides for the traction. Traction was pretty spotty most nights, something I wasn’t expecting since I enjoyed the Kyrie 1, but the rest of the shoe was very solid. If you loved the Kyrie 1 then I have a feeling you’ll love these as well.

The fit and lockdown are an upgrade in comparison — to the Kyrie 1 — while borrowing the same tooling. I still feel the Nike Kyrie 4 is the most well rounded of the Kyrie models, but the S1 Hybrid is a close second. It offers forefoot cushion and an optimal fit to get you through games or hours of pick-up hoop sessions at your local gym.

Is the S1 Hybrid worth going out of your way to buy for on-court use? No. But if you like how the shoe looks and wound up buying a pair to play in then you should be satisfied for the most part. 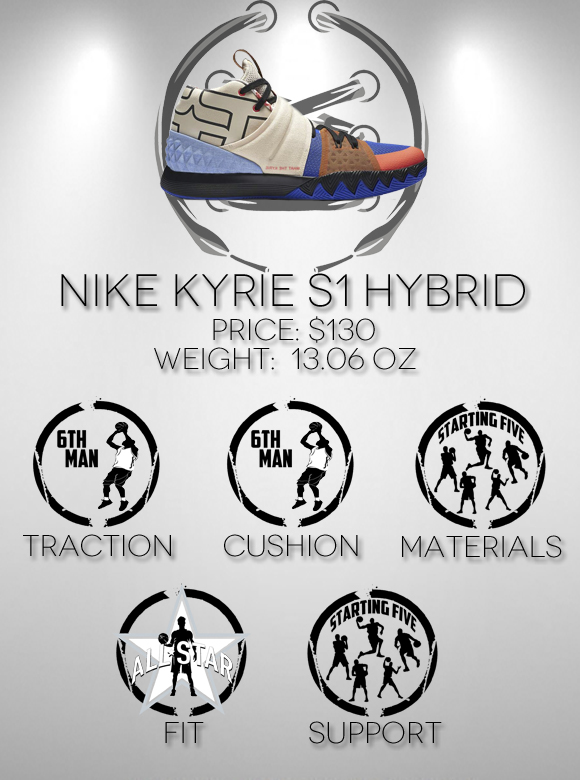