If the Nike Kyrie Flytrap had a sound all you would hear are crickets chirping.

The outsole the Nike Kyrie Flytrap resembles a watered-down Kyrie 4 outsole. The herringbone doesn’t look as aggressive as the Kyrie 4’s, but that doesn’t matter, because the traction on the Kyrie Flytrap was excellent.

I broke this shoe out on a super dirty court and probably wiped a few times the entire session. Every session after that the traction was an absolute beast on everything it touched, and I play on hardwood, rubber, tile, plastic, etc. and the traction held up nicely. I wish Nike put this outsole on the Kyrie 4 — game changer, I’m telling you.

The Kyrie Flytrap uses a Phylon midsole with a small Zoom unit underneath the balls of your feet. Now, if you are expecting this cushion setup to be on marshmallow mode, then you might want to start looking at another shoe because this ain’t that.

However, this cushion setup wasn’t horrible; the Phylon is a little softer than what was used on the last Kyrie models (excluding the Kyrie 4 and its Cushlon). At the same time, you still get some excellent court feel. Those that love that low-profile and minimal cushion setup may really like Kyrie Flytrap.

The shoe features a knit upper with a textile panel on the inside of the shoe. The knit feels like a light mesh and surprisingly it’s held up so far. I thoughts it would have torn up by now but I was wrong! The knit does support and contain my foot just fine, and the breathability was on point. However, there is a slight issue with the fit that makes me dislike the materials just a tad.

Everything about the fit for me was weird. The sizing is pretty much true to size for both narrow and wide footers, but narrow footers may feel the need to go down a half size because of dead space in the toebox. However, I don’t recommend you guys do that because your toes will bust out the front like a jack-in-the-box.

I don’t know if it was because of the asymmetrical lacing but all I know is that when I tie these shoes the dead space in the toebox folds over my foot like a damn burrito with extra beef and that ain’t what’s up. On top of that, the footbed feels like a banked turn on a NASCAR race track — it slopes inward a bit — which I never got used to.

Lockdown was OK, only because I had these bad boys tied tighter than a jelly jar. The elastic band over the forefoot wasn’t bad, I could feel it holding me down, so it served its purpose. I just wish the folded burrito-style material wasn’t an issue in the toebox; it would have significantly improved the lockdown.

The support was slightly below OK. You still have your usual support features like an internal heel counter, which cradles the heel, and a midsole that cups the foot to keep it atop the footbed. I didn’t have any issues with containment. However, the stability is where my problem lies.

Remember when I said the footbed feels like a turn on NASCAR race track because it slopes inward? Try running up and down the basketball court and feeling your ankles leaning in a bit every time you plant your foot. Yeah! That’s a real uneasy feeling, let me tell you. I don’t know if my pair was a defect or what but I don’t like it at all. If the footbed were a little flatter then this review would have been different.

The Nike Kyrie Flytrap is a nice shoe casually. Is it worth your $80 bucks? I don’t think so. I would much rather spend that $80 on a great sneaker from last season that’s on sale, like the PG 1.

If you want the Kyrie logo on your shoe and just absolutely need a Kyrie signature shoe, I say do some chores, sell some shoes or whatever you have that you don’t need, and save an extra $40 to buy the Kyrie 4, which isn’t an expensive shoe at $120.

However, if traction is all you care about then you will love the Kyrie Flytrap. 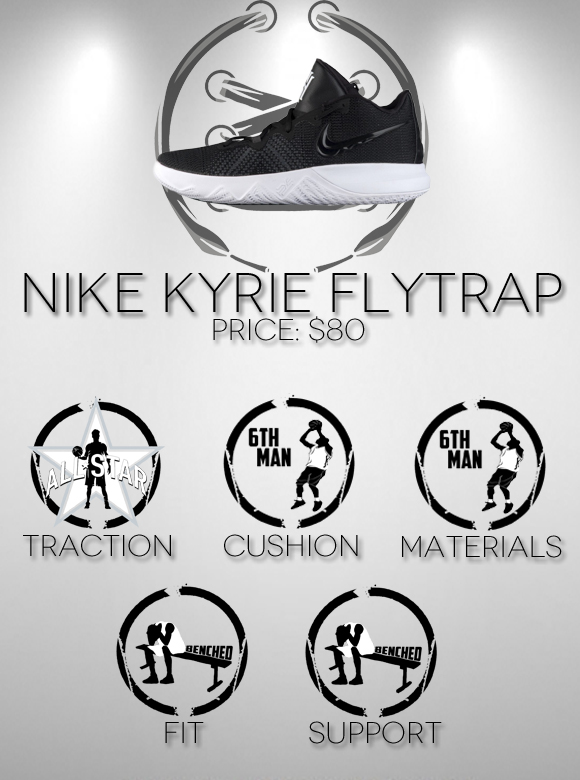