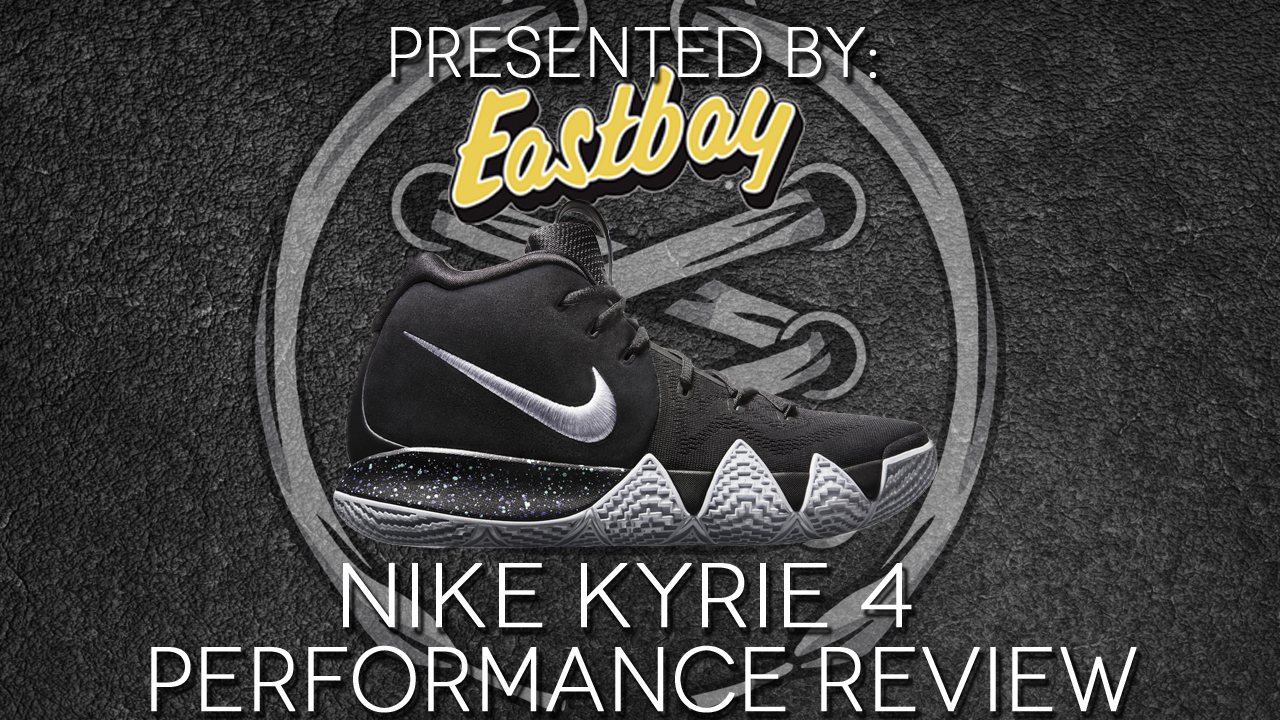 Time to get my Uncle Drew on and get buckets in the Kyrie 4. 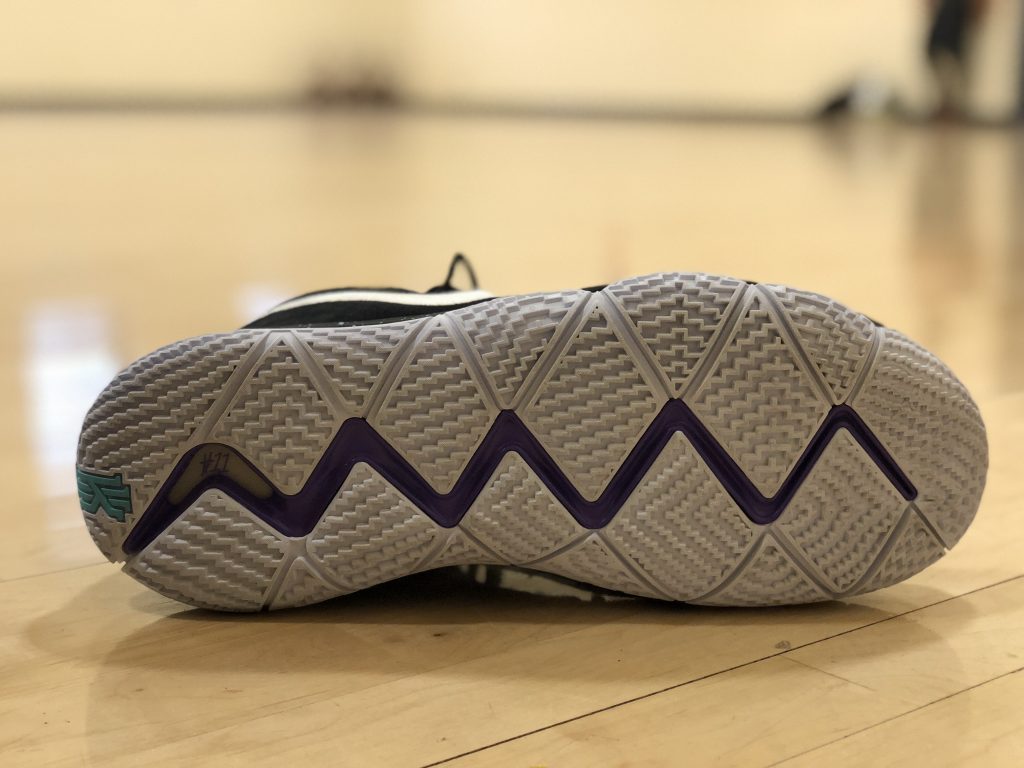 Traction – Multi-directional herringbone was implemented very well in this shoe. The traction pattern is aggressive enough for those who change direction quite often. There was some break-in time until the outsole really started gripping the floor but once you’ve done that you’re in for an awesome ride because it gets better with time.

You’ll occasionally have to wipe due to dusty floors but that’s the norm. I didn’t find any particular issues with lateral movements playing on top of the key or working down on the block against bigs. Everything will work well no matter the position you play. 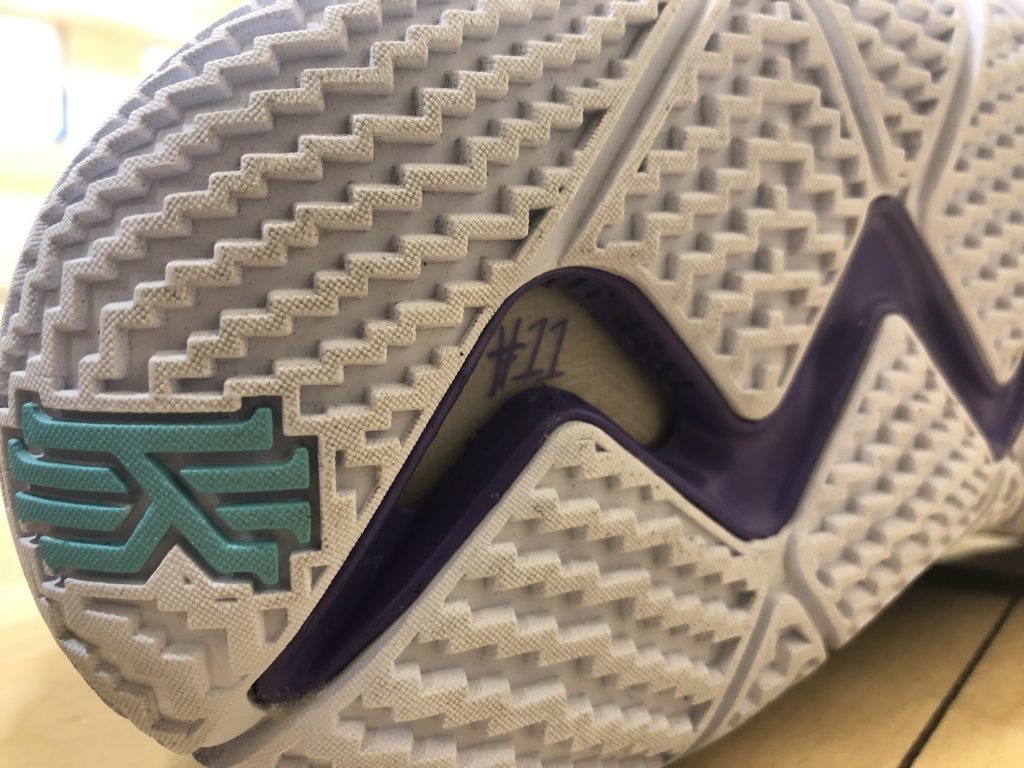 Cushion – I’m always a sucker for a softer cushion setup because I’m a bigger player and the Kyrie 4 showed showed vast improvement from its predecessor. A slightly larger 11mm thick heel Zoom unit provides nice support for those that need it but the biggest upgrade is implementing Cushlon. While it isn’t as bouncy as some people would like, it offers a very well-balanced cushion feedback while providing ample court-feel — something which Kyrie prefers due to his unique movements.

As a big man I enjoyed the setup. Would I prefer full-length Zoom or segmented Zoom in the forefoot and heel? Sure I would, however, I don’t have many complaints because the cushioning setup here offered just enough without my knees or back feeling most of the impact. 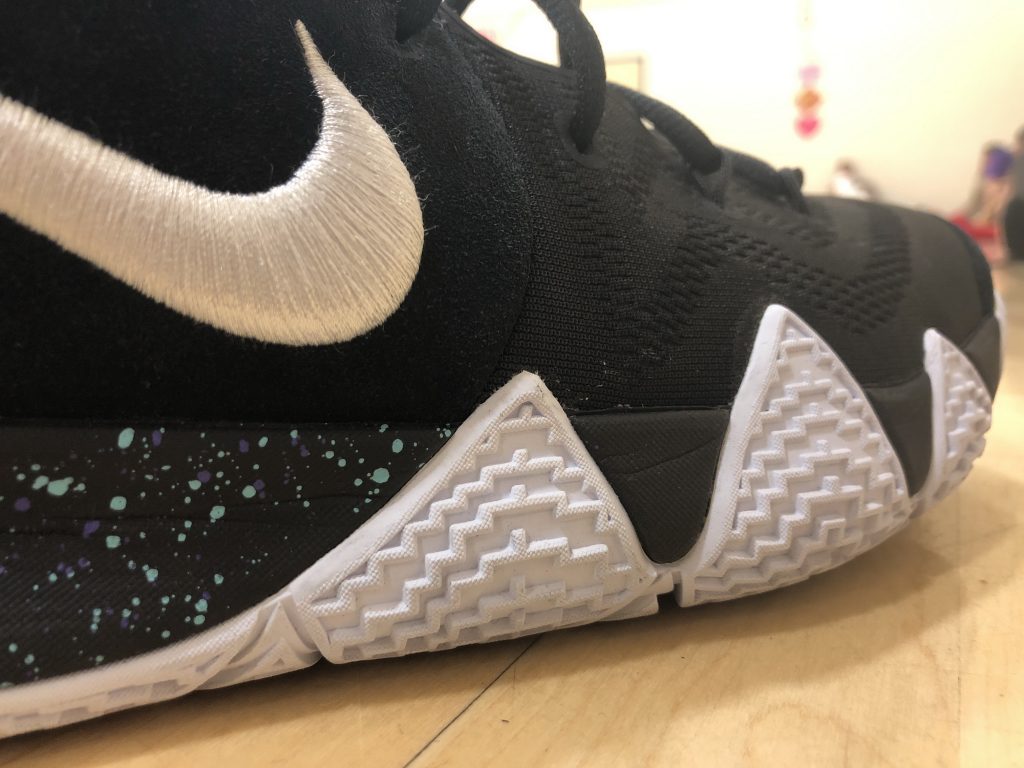 Materials – Engineered mesh is used from midfoot to the forefoot while suede is used at the heel, as well as the toewrap. Additionally, the outsole is comprised of pretty durable rubber.

High-end basketball shoes in the ’90s were priced around the $120 mark, so being that this is still considered a budget-friendly model at the same $120 price point mark is great (especially because that $120 in ’95 is $198 in today’s money). With the the Kyrie 4 you get a mixture of awesome materials. As a customer, you have to be excited. 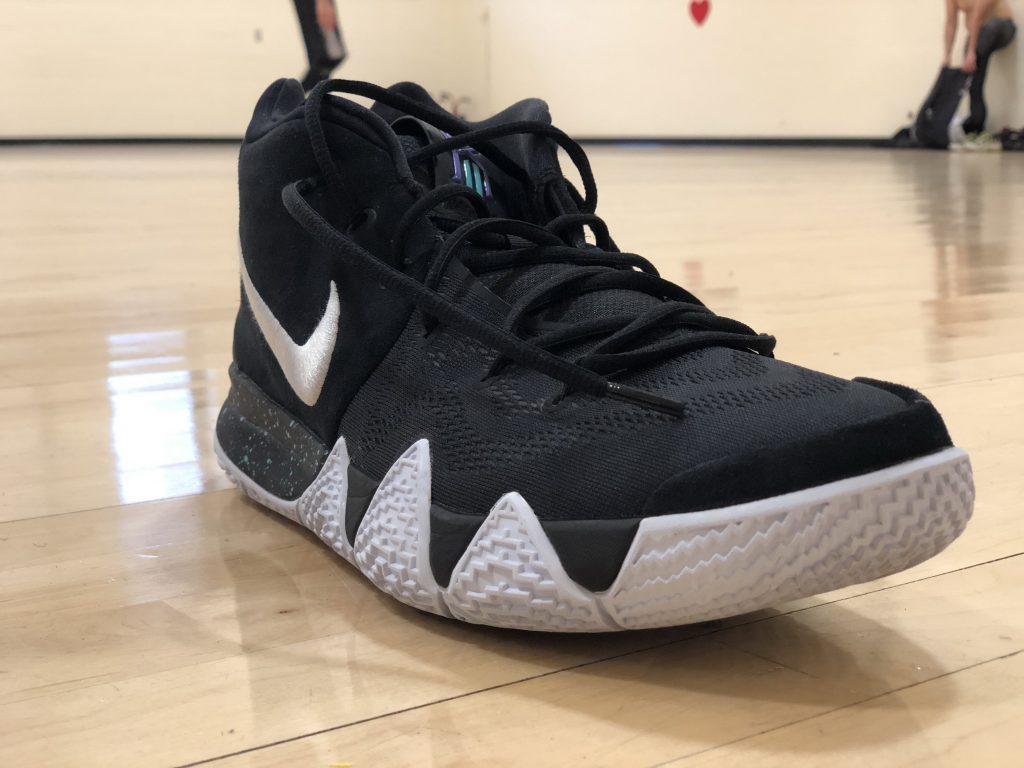 Fit – Generally I’d say true to size — although wider-footers might need a half size up — so definitely try them on in-store. The Kyrie 4 is slightly on the narrow side due to the outsoles “teeth” extending up onto the upper. Lockdown wasn’t an issue because once laced tight you’re pretty much ready for battle. Like its predecessors, the Kyrie series has always been solid from a fit standpoint. 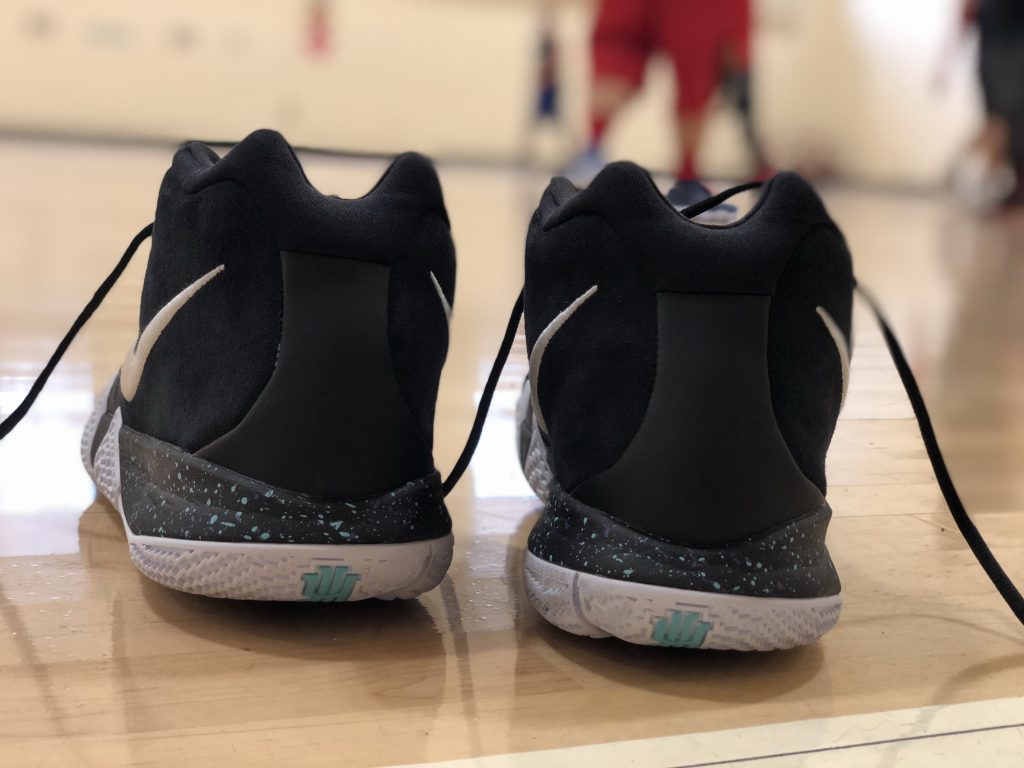 Support – Support generally comes directly from the fit of the shoe. In the Kyrie 4 the “teeth” keep you stabilized while the internal heel counter keeps you on the footbed. In addition to the the wider base because of the sculpted outsole structure, the soft rubber, heel Zoom, and lacing setup hold you in place without concern. 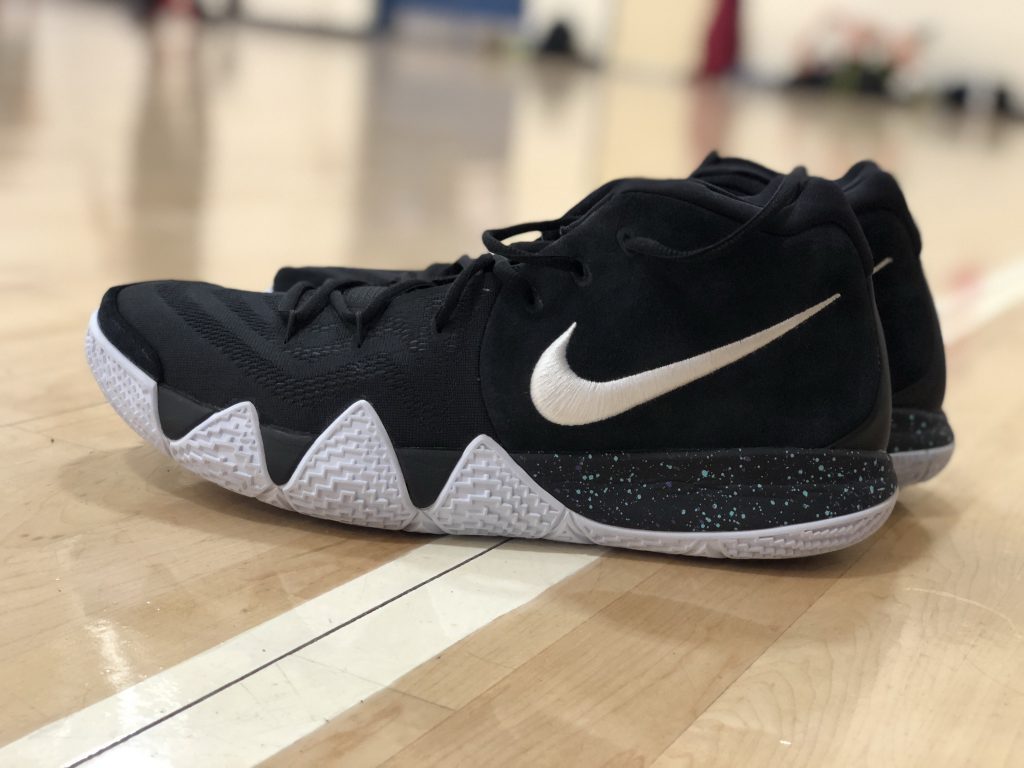 Overall – The Kyrie 4 is one of Nike’s best-performing signature shoe to date. It’s a well-rounded shoe that works with any player in a now positionless game. From the materials, support, and fit to its decent price point, the Kyrie 4 excels in every category.

I’m hoping that as the series evolves the Cushlon gets softer and more responsive (think Podulon/Cushlon in the Jordan CP3 series) becuase that would really benefit a guy who plays more of a Draymond Green/LeBron-esque type of game like myself.

Ben Nethongkome, the designer of this latest model in the Kyrie series, really hit the mark. I am looking forward to the Kyrie 5, and the upcoming budget model. Great job by Nike. 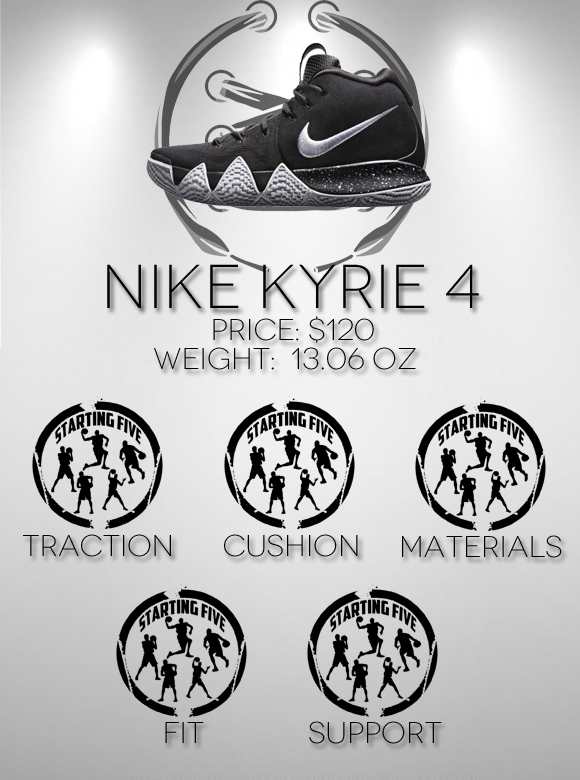