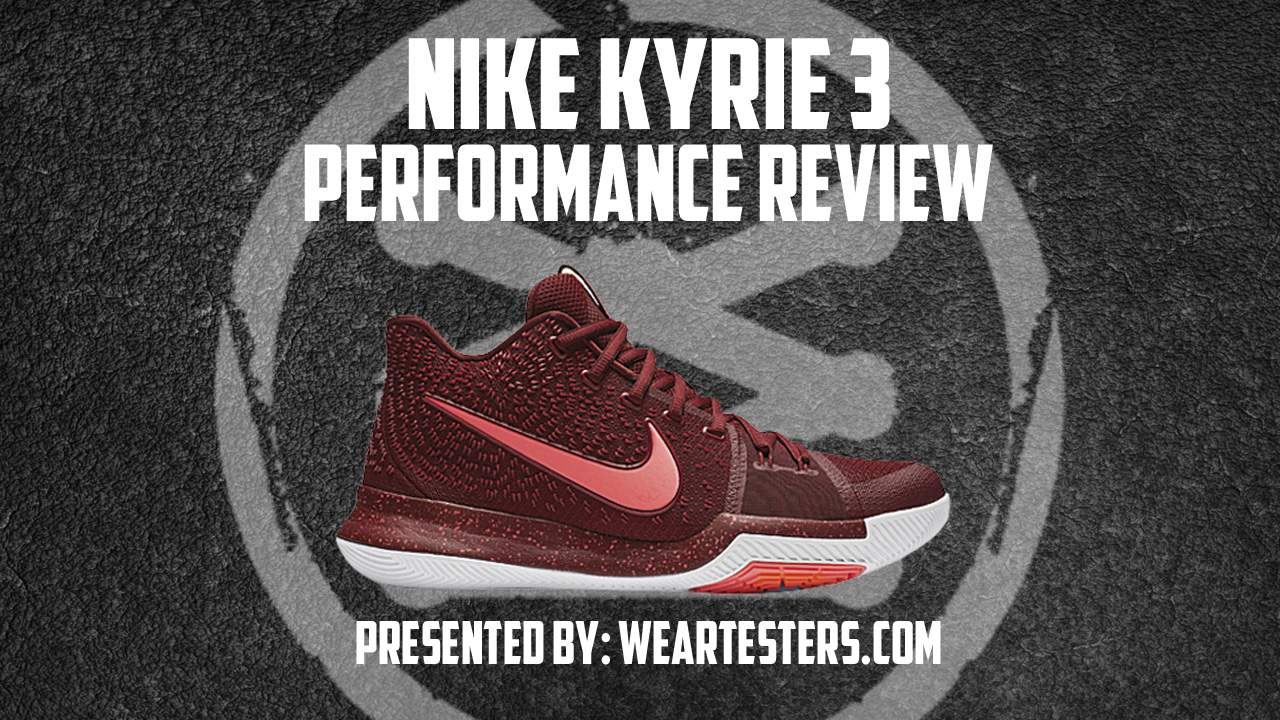 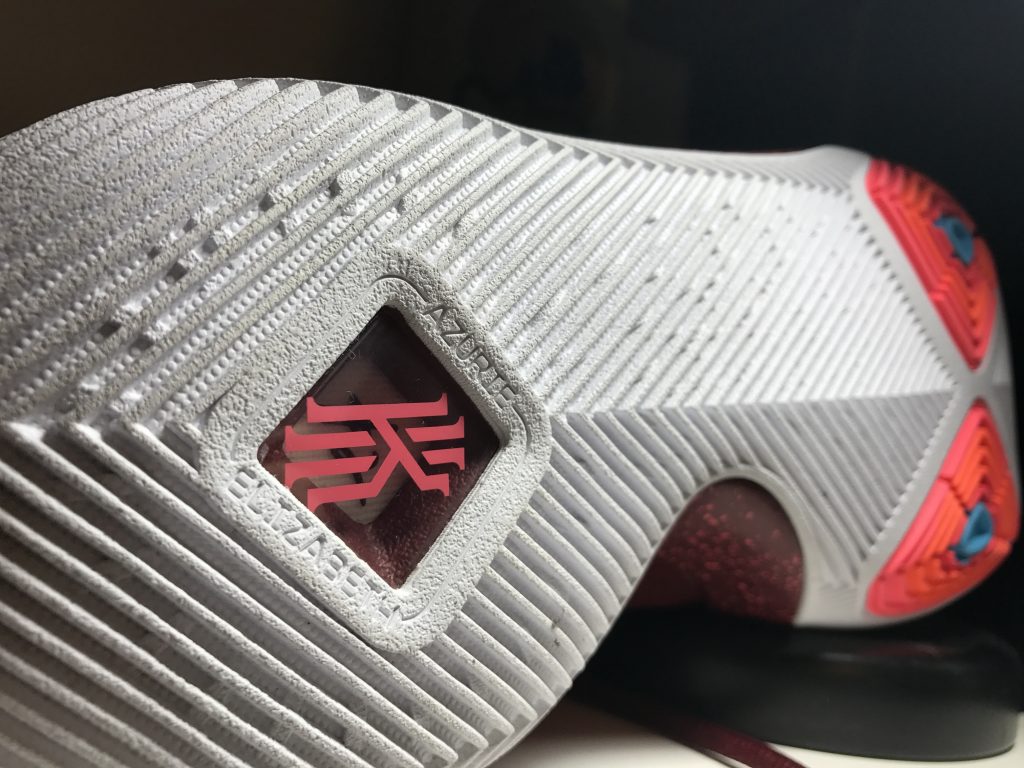 Traction – The Nike Kyrie 3 traction was one of the better tractions I’ve played in. It’s hard to upgrade what was already amazing from the Kyrie 2, however, the Swoosh somehow found a way to upgrade.

The shoe utilizes an aggressive herringbone from heel to toe along with what I call heat-mapped pods at the forefoot. Those pods are specifically catered towards the movements of Kyrie, allowing a guard like himself to aggressively change directions without losing any time. The reason I’d say it’s one of the better tractions and not the best is because of the courts I’ve played on.

The X between the traction pods didn’t bite down and grip like I wanted to, as I found myself relying more on the forefoot pods for transitioning movements from change of pace moves. Coming from the spectacular traction of the Ambassador 9 has set the bar quite high, but the Kyrie 3’s traction wasn’t a slouch either. 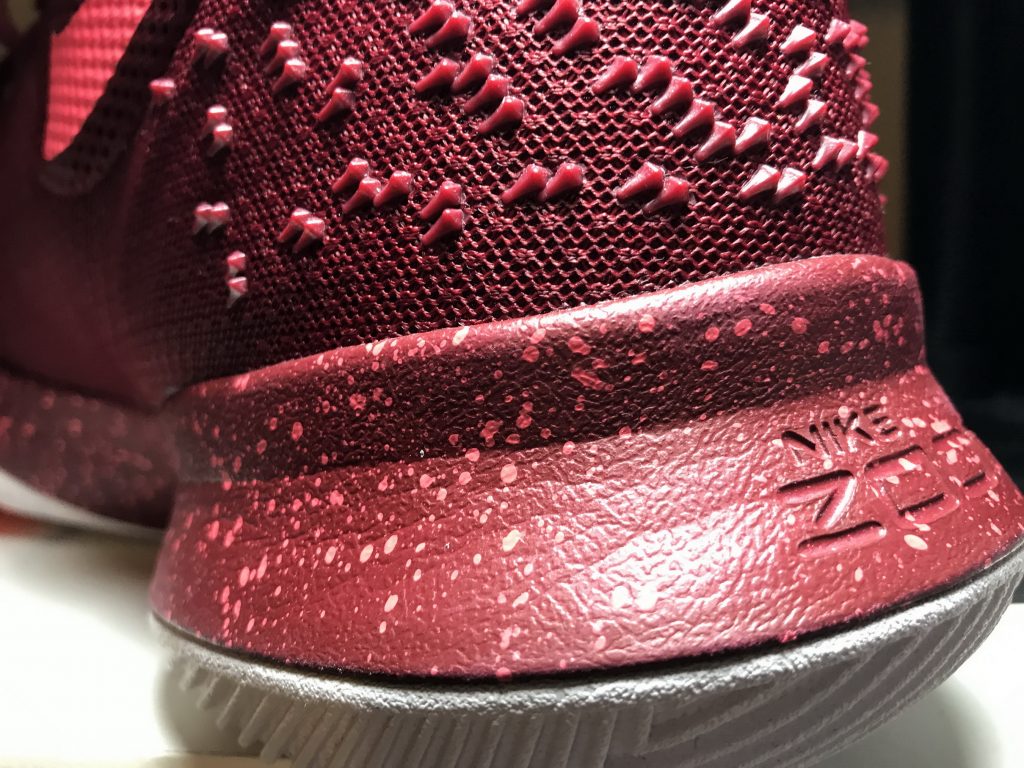 Cushion – Um…what cushion? It doesn’t take too much to add a more responsive cushion to a shoe. It’s understood the shoe is designed for court feel, but when you come from a large forefoot Zoom unit on the Kyrie 1, and then just using heel cushion from the Kyrie 2, I was expecting more. Yes, the shoe only costs about $120, but some budget models felt better on-foot than these. Nowadays, you don’t have to sacrifice cushioning for court feel at all, and I’m coming from a bigger man perspective.

The impact protection I need wasn’t there, and it took a toll on my body and recovery. You do feel low to the ground with the Phylon midsole, but when I’m going to work down low on the block, grabbing rebounds, landing off lay-ups or jump-shots, I’d like my knees not to feel majority of the impact. If you like low to the ground court feel, this shoe is for you. For those who want responsive cushion feedback on impact, you should consider something else. 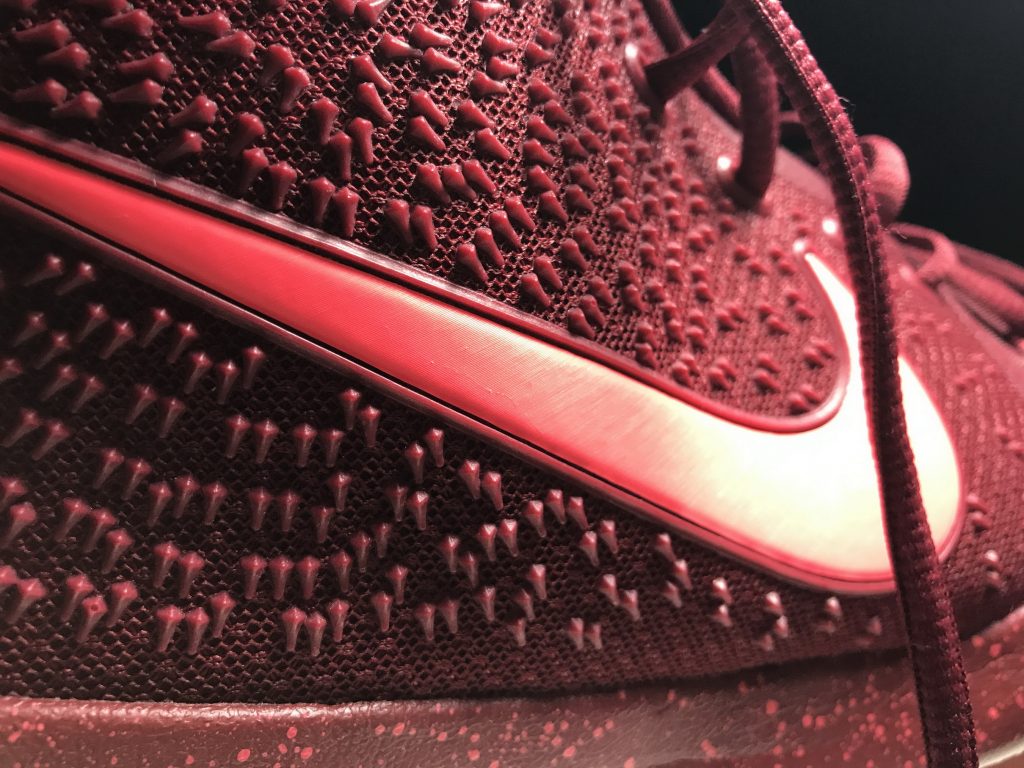 Materials – Now we are talking. The big improvement on this pair from last year’s model is the way the materials were utilized. It’s an all mesh shoe, with foam padding along the forefoot flex area. Visible is the Flywire reinforcement, fuse on high wear areas, and Kurim overlay that protects against abrasions. The shoe is minimalistic yet effective in the usage of materials and it worked very well.

Fit – True to size. For those with narrow to regular sized feet, you’ll be fine. For those with super-wide feet, consider 1/2 size up but I do recommend trying these on in store first. If you wear ankle braces I suggest bringing them with you to try the shoe on. The lockdown felt great from heel to forefoot and there was no deadspace at all. Everything just worked well. 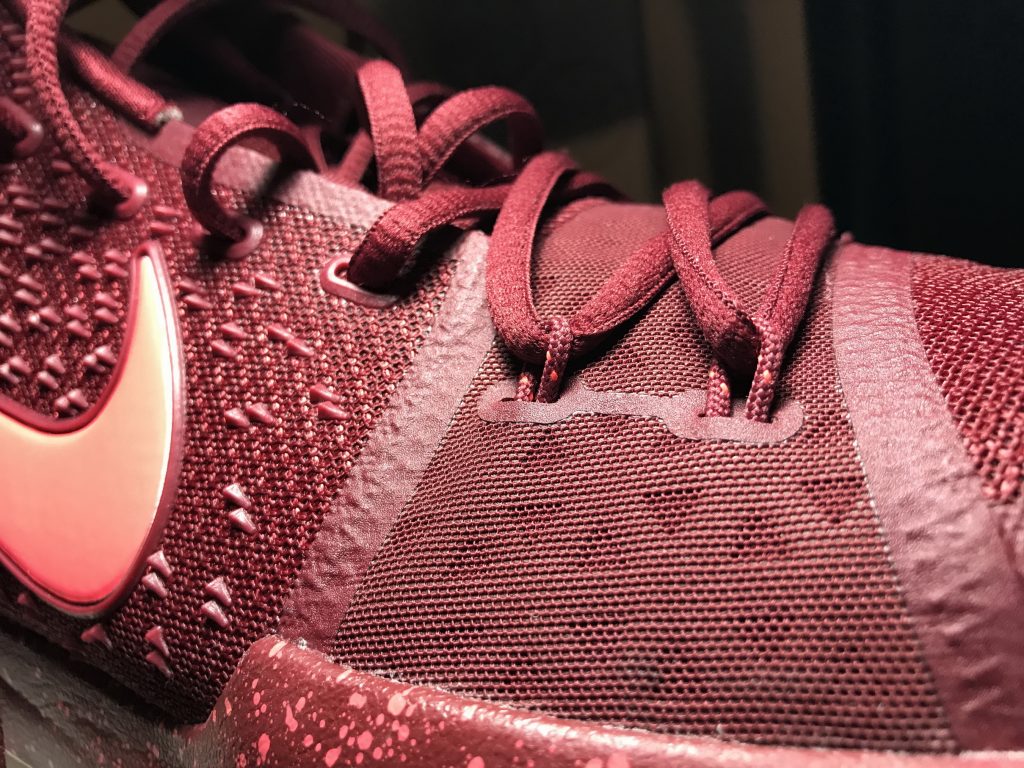 Support – There is an internal shank plate for torsional support, an internal heel counter to keep your foot locked in place, and a rounded outsole. The only thinking lacking in the support is again, the cushion. It was nearly nonexistent on any type of impact for someone of my size.

Another area that I’m not a fan of is the hard-as-a-rock toecap. The area is fused to the point where I feel like if kicked a concrete wall, the wall would crack. I like having a thumb’s length worth of room when playing ball, but on stop and goes my toe would hit the fused toe cap and that s**t hurt. Support is there but the painful toecap and lack of cushioning are downers. 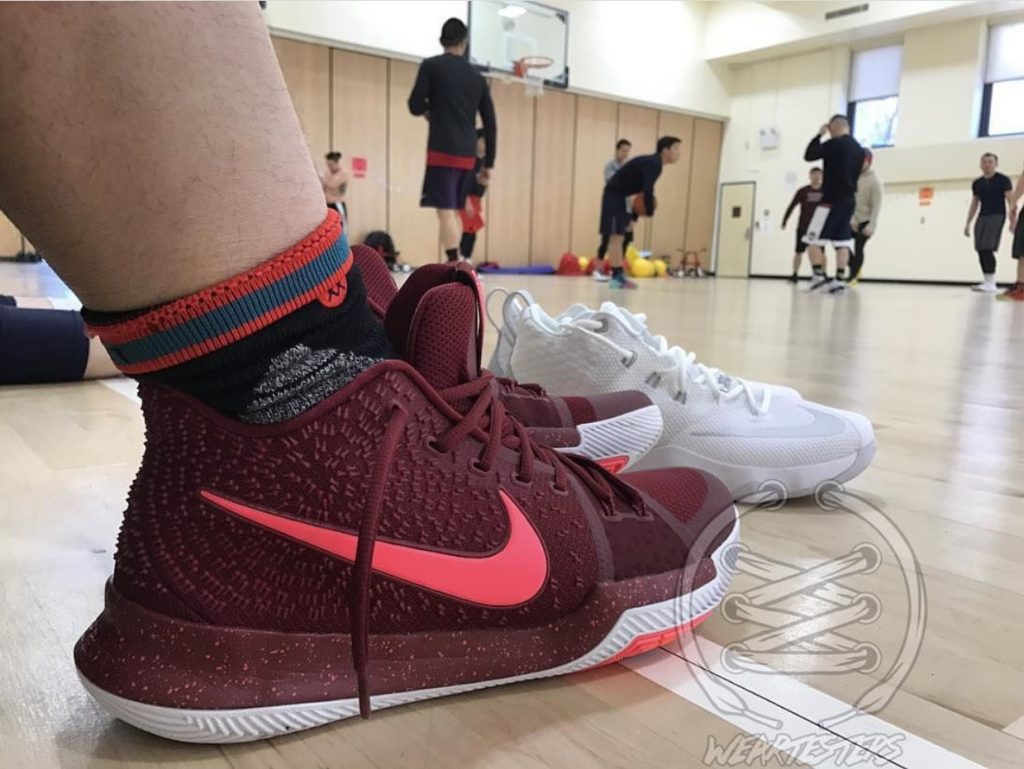 Overall – This was the first Kyrie shoe I was able to fit well for someone with a wide foot base. I did thoroughly enjoy the shoe, particularly the materials and the traction. It’s such a minimalistic shoe that Nike almost had everything working in unison — keyword, almost. More cushion is definitely a much-needed necessity and a well thought-out execution with support would suffice.

This is a shoe for players that cut heavily, need minimalistic cushion, and rely on that court-feel. Players, like big men, who need that responsive feedback from the cushioning should look elsewhere. Overall, The Kyrie 3 isn’t a bad shoe, and there is definite room for improvement, but I do like the direction Nike is going with Kyrie’s signature line. 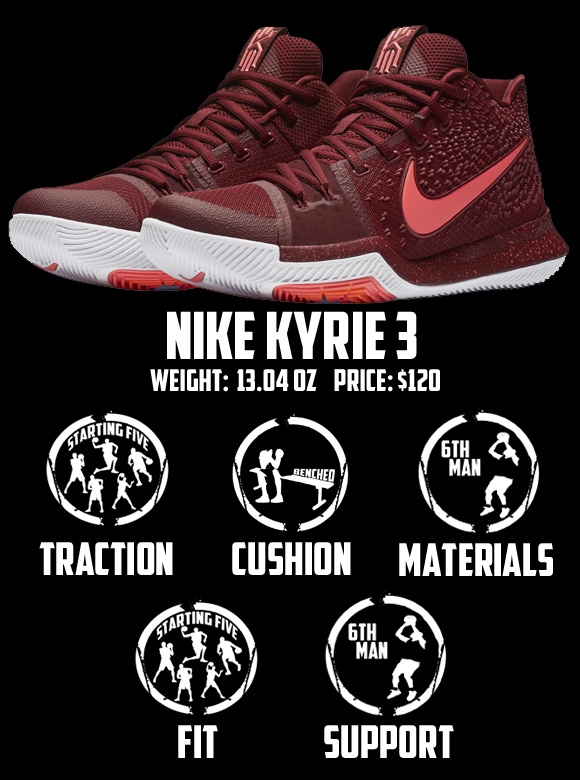