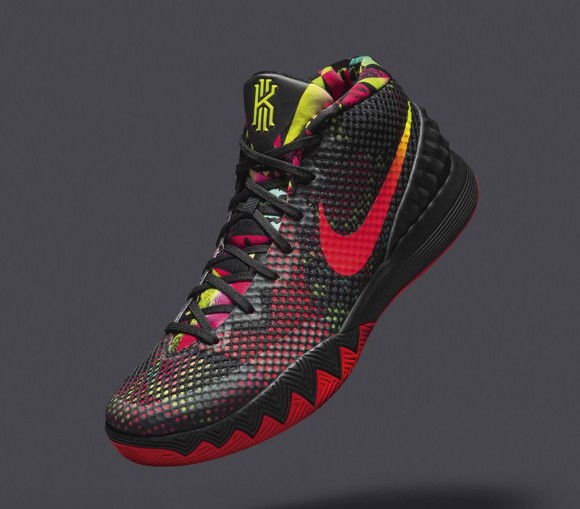 Leader of the New School Looking for new blood, Nike goes to Cleveland and gives us a shoe for one of the most dynamic young point guards in the game. Will it hold court or be exiled to the back of the closet? 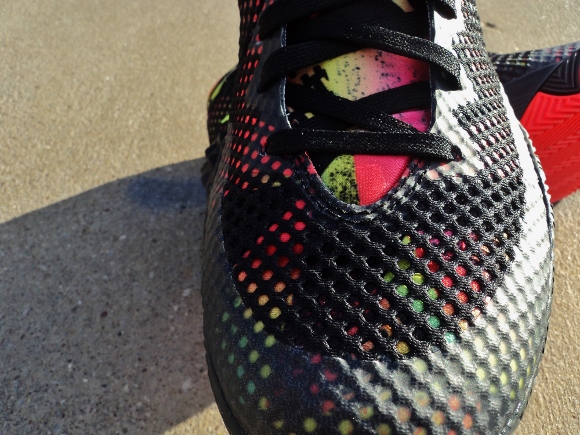 Materials – Old-school (feels funny to say) Hyperfuse. Very much like the very first Hyperfuse, so not much innovation here. Wide mesh holes backed by a smooth fabric liner which just about kills the original ventilation of Hyperfuse. It is padded and feels great next to the foot but my shoes stayed soaked for a couple hours after I was done. There are welded overlays around the toe-drag area and the lace holes to keep durability up, but overall the shoe starts out stiff and, basically, extremely uncomfortable. I’ll get into this more in the fit category, but if you judge the shoe out of the box, you are probably going to be very disappointed. There is a nice touch of synthetic leather around the top two lace holes on the inside – need more of that definitely. Let’s get to the court side of things… 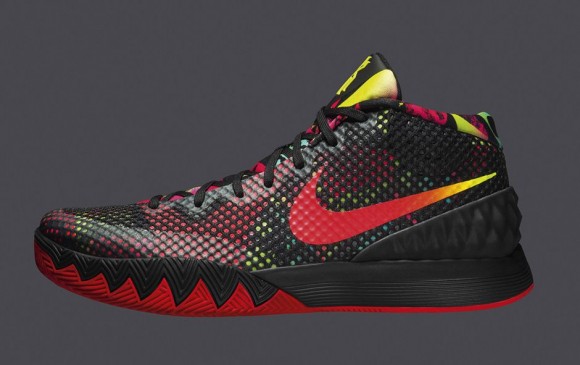 Fit – This is probably the most argued-about shoe I have ever seen in regards to fit. “True to size? Half up? It’s narrow and uncomfortable. It’s too long now.” Here is my take – stay true to size unless you ALWAYS go up a half size for width. The shoe breaks in and improves pretty quickly. The area of concern is the orange-red support piece under the Fuse laying over the pinky toe area. This support piece is woven tighter than the outer Fuse and gives great lateral support, but those first few games (or hours for you casual guys and gals) hurt. I wear a 10.5 in 99% of EVERY SHOE I have worn, and a 10.5 fit me fine after the first day wearing casual (for break-in before court time). The rest of the shoe is locked tight. I had worries about the size of the collar opening (Nike Zoom 95 memories) but lacing normal tightness through the top hole did the job. I have heard of heel slipping but never mine. The only complaint I had was the top collar riding into my Achilles’, like it angled in and down. Amazingly, I only had this feeling when I wore them casually – when laced tight for play I never felt this. For a simple lace hole layout, I felt as tight as a thief in church – no front to back slipping or side to side. 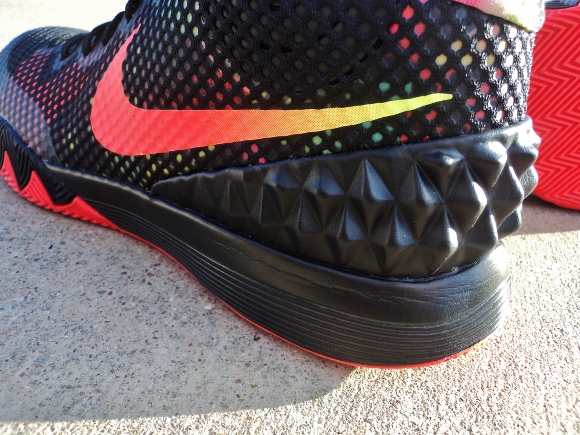 Cushioning – It says Zoom is there, so I will say Zoom is there, but I haven’t felt it much yet. For the record, I got these on December 29th and have played  about 14 hours in them, plus multiple casual wears, and I am just now feeling a little bounce under my foot. Not to say cushioning is bad – it isn’t. To me the heel is just the right amount of soft and stable just using the Phylon foam, especially when it begins breaking down after about the second game. You can see the lines of compression in the pic above, showing the beginnings of breakdown. Personally, I like a firmer ride under the heel, especially when hitting jumpers (I didn’t say shooting – I said HITTING!!!) off curls – it gives a more stable platform for squaring up. If I have a Max or even some Zoom heels, I feel slower planting and rising. The forefoot, before Zoom, does give a good court feel, not great, and doesn’t really feel slow or draggy, it just doesn’t feel…special. It feels like a “shoe”, not a “SIGNATURE” statement.

Traction – This shoe and outsole were built for speed, court feel, and traction. Almost. Covered the fit. Covered the court feel and cushioning. So, about that third category…it’s okay. Really. I played on four different indoor courts and the only real bite, dime-stopping, leave your man flying by traction was on the newly refinished court at 24 Hour fitness. A little dust goes a LONG way, especially with this outsole. On the old, dirty, BAD other 24 Hour court, I looked like Road Runner – feet doing circles trying to grip. Twice on one move I slipped and almost fell. In defense, the Jordan XX9 I changed into did the same thing, so it wasn’t the shoe completely, but for a shoe based on “traction everywhere”, I was a little let down. I did like the difference in pattern under the forefoot – it felt like the shoe helped into cornering. Or I could be crazy and easily influenced. Needless to say – clean court – full speed. Little dirty – bring your Sani-Wipes. One more thing – I would NOT expect this pattern to last long on rough outdoor courts. The pattern is shallow and the rubber isn’t the hardest, so wear would be quick. 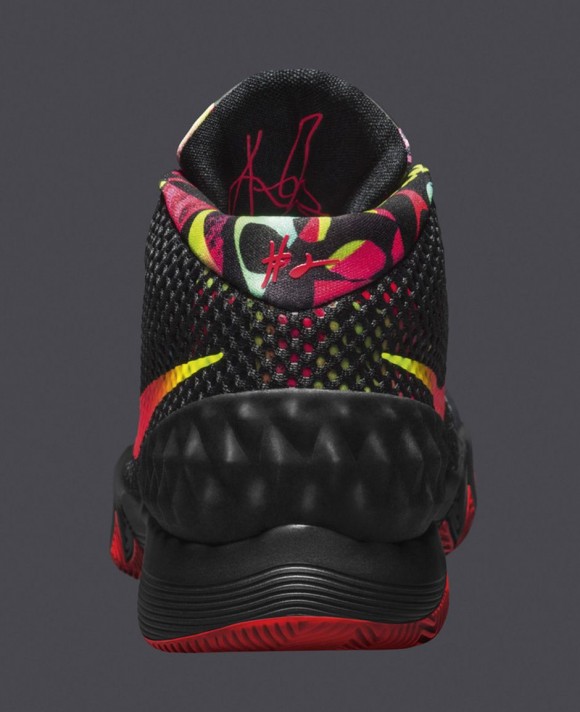 Support/Transition – Support in the Kyrie 1 is basically one two things – the forefoot overlay and the massive heel counter. The most eye-catching detail on this shoe has to be the heel counter and it’s Teenage Mutant Ninja Turtle spikey shell. Good for it. Polarize the public and make them love or hate it, as long as it works, and it does. The shoe overall is stiff, but the heel needs to be and is. Luckily it rises just high enough to cover the heel and still low enough to allow some freedom in movement. The rest of the support comes from the lacing and the overlay, and if you play in the Kyrie you will feel the forefoot support piece pushing back on cuts and lateral movements. I liked it. It works. Transition, for a flat-soled shoe, was smooth, and part of this, I think, was the lack of feel from the Zoom. I am a big proponent of consistency in cushioning, and the Phylon takes over here. I know a shoe won’t make you faster, but when movements are easy I just feel faster, and this shoe made movements easy. Forward, backpedaling, cuts, defense – I felt all movements were smooth and free, ONCE BROKEN IN. You have to give this shoe time. 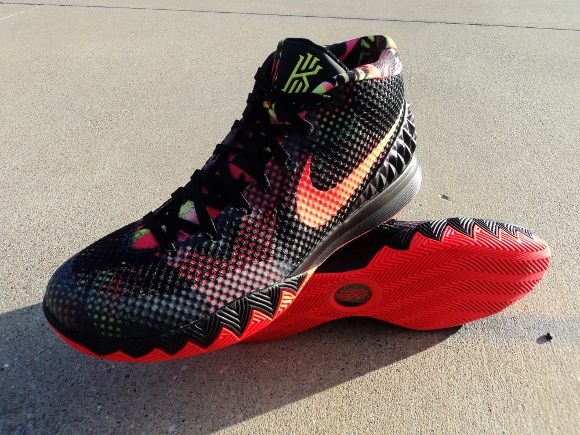 Overall – I made a statement when I first got the Kyrie 1 that this shoe feels like it will be greater than its parts, and I wasn’t wrong. Nothing really stands out on the Kyrie – traction is okay, cushioning feels average, fit is good – but I never, EVER had a bad game in them. I know shoes don’t make the player, but when they are bad they can hurt, and before the first wear I was dreading this review. The shoe just didn’t feel good on foot. But then I played the first day, and it started coming alive, and I played good. Next day, same thing – a little more alive, fit got better, cushioning felt better. After 5 game days, I had played a week and a half of nice ball, all wearing the Kyrie. Some shoes are like that – little technology, not much going for it, then BAM!!! – you have a good day in them and can’t take them off. Some high-tech, every bell and whistle feel like junk and play even worse, and those reviews hurt. I would place the Kyrie in category 1. I still feel it was a little more on the “streetwear” tip than full-on performance, but who am I to argue with the basketball gods. Break them in and wear them out. 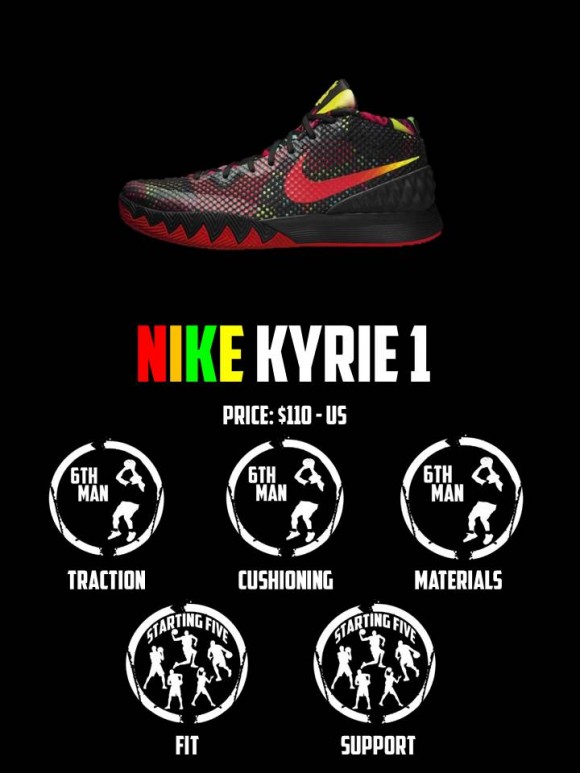