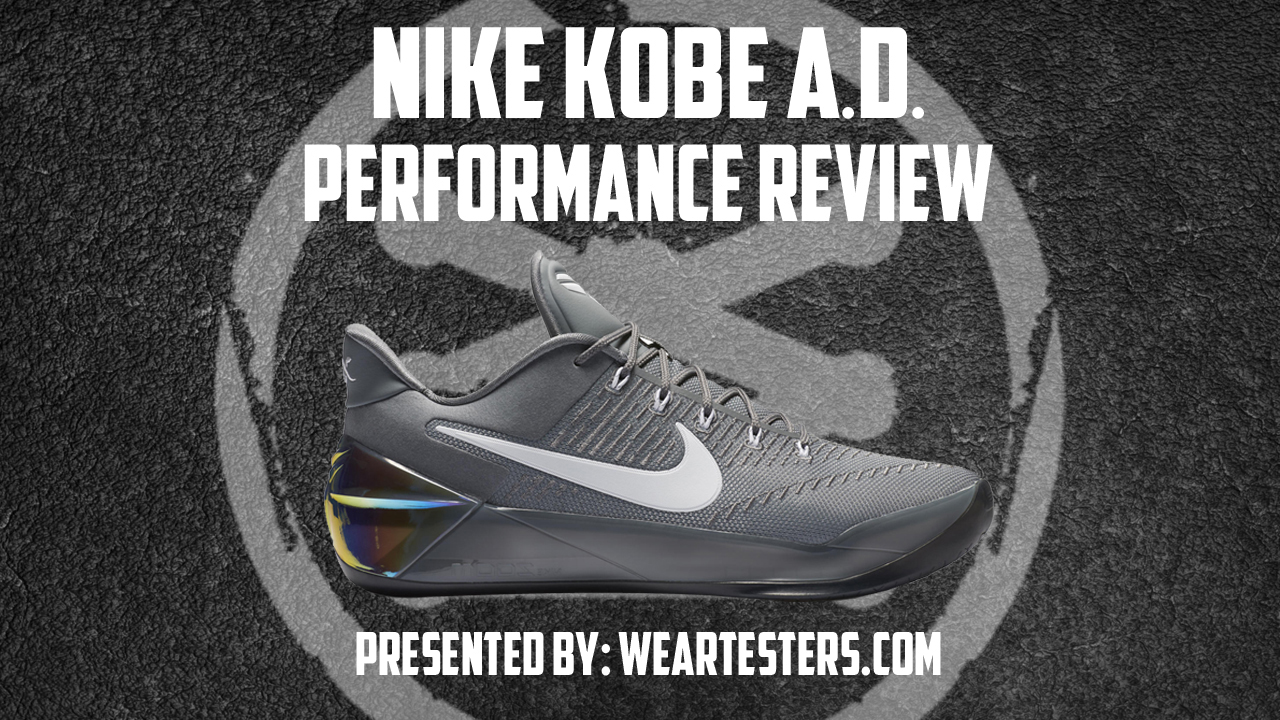 The Kobe A.D. is the first sneaker to drop in Nike’s Kobe Bryant signature line post-Kobe’s retirement. Honoring the legacy of a fantastic career and an amazing line of signature models is a huge thing to live up to, but can the Kobe A.D. stand out in what has been an amazing year for on-court models? Find out with my performance review of the Nike Kobe A.D.

Traction: Nike has implemented two familiar traction patterns on the outsole of the Kobe A.D. In the front, hundreds of nodules (similar to what was found on the Kobe X) grip the court for maximum grip, while the back features a Kobe 6-like traction pattern that truly captures Kobe’s “Black Mamba” moniker. The overall performance of the outsole was pretty solid but the rubber compound that is used here is an absolute dust magnet and will require frequent wiping on floors where the conditions are less than ideal. While the traction performed fairly well in most conditions, a small problem I experienced during use quickly turned into a very big problem.

Early on, during hard cuts and lateral stops, I felt a sort of “peeling over” effect of the outsole. At first I thought that it was just the nodules in the forefoot splaying out like they are supposed to, but after only about ten hours of play I realized that “peeling over” effect was actually the outsole separating from the midsole. Simply put, the Kobe A.D. could not handle the amount of force I was applying to its outsole. The lateral forefoot, where the outsole extends outwards a little to create a small outrigger, just started to break off from the midsole — so badly that I could touch the Lunarlon cushioning. I honestly can’t tell if this is a design flaw or if I just got a defective pair, but what I can tell you is that I’ve never experienced something like this in any basketball shoe, ever, and I’ve run some shoes into the ground in years past.

Cushion: Last year, the Kobe 11 used the beloved drop-in midsole technology which gave us the option to customize the cushioning to our liking. If you didn’t like the standard heel Zoom and Lunarlon midsole, you could switch it out with a full-length Zoom or a full-length Lunarlon setup. This year, Nike provided an encapsulated Lunarlon and heel Zoom setup that is just not comfortable. The heel Zoom unit is basically nonexistent, even if you do strike or land with your heel, and the overall firmness of the encapsulated Lunar is almost unbearable during a painful break-in period. Even after the lengthy break-in period, the cushion setup is too stiff and doesn’t provide enough court feel to compensate for its overall firmness. On the medial side, the midsole uses a Phylon foam and this may or may not be the cause for some stabbing in the medial forefoot, which even occurs after you break in the cushion. To sum things up; no impact protection, mediocre court feel, and a long break-in period. Yes, it’s as bad as it sounds.

Materials: Straight out of the box, the ballistic mesh-like upper feels extremely stiff, but after a standard break-in period the materials end up being slightly above average. Nike calls the mesh material they used here “breathable” but the only part of the Kobe A.D. that allows heat to escape and air to flow is the mesh tongue. The rest off the upper might as well be made of plastic from a breathability standpoint. The good news is that the mesh upper gets more comfortable every time you slip your foot in them and by the time it’s fully broken in, the upper goes unnoticed during use — a good thing, as it won’t distract you during playing time. There is a suede overlay in the heel area but this just gives the A.D. a boost in aesthetic appeal and has no effect whatsoever in its performance on-court.

Fit: Over the years the Kobe signature line has been pretty consistent with fit. If you got the Kobe 6 in a 10.5, you most likely got the same size in the Kobe 7, 8, 9, etc. The Kobe A.D. continues this consistency and provides a great all around fit despite the model’s other flaws. Some Kobe models have been known to have a bit of dead space in the toebox area. However, the A.D. eliminates this problem entirely; when you first step into the Kobe A.D. you might feel like they’re too tight but after the materials break-in the overall fit is pretty fantastic. The materials wrap around your foot so nicely that the dynamic Flywire, which is integrated into the lacing system, feels like a security blanket more than anything; it’s nice to have it there just in case you need to further adjust the fit to ensure a seamless experience.

Support: Kobe’s signature line has never been known as a “support heavy” line, but the models always did just enough to make the user feel secure on the court. The Kobe A.D. is no different, but as I mentioned in the traction section, the outsole started to separate from the midsole and that nearly counteracted the entire support system. Even though there is dynamic Flywire for lockdown fit, an external heel cup for lateral support, and a slight outrigger on the lateral forefoot, the separating outsole made it impossible to feel fully secure during play and quite frankly, it just isn’t worth the risk. Having a major problem like the outsole separating from the midsole not only prevents you from doing basic basketball movements, but it also increases the risk of rolling an ankle or even worse, tweaking your knee. If you get a pair, support is just fine and will provide the necessary features that you need to feel secure on-court, but you are taking a huge risk counting on the durability of the Kobe A.D.

Overall: The Kobe A.D. is a sort of coup de grâce, a final bow, the culmination of a fantastic line of signature models from years past that Kobe wore throughout his illustrious career. It’s a lot to live up to but Nike has shown us that it has been able to take Kobe’s drive and ambition for excellence and translate it into shoe design. To put it bluntly, the Kobe A.D. has no innovation, no ambition, and nothing worthy enough to be associated with the five-time world champion, 18-time All-Star, 15-time All-NBA, future Hall of Famer, Kobe Bryant. I’ve been watching Kobe my entire life and he’s groomed me to expect high standards. His persistent journey to greatness radiated onto everything that had his name but the Kobe A.D.

The visual appeal of Kobe’s first post-retirement sneaker is off the charts but this is a performance review, and in that regard, the Kobe A.D. is more than just a disappointment. We are disheartened that a product with Kobe’s name performs this badly. Not only did the break-in time overstay its welcome, but the overall durability and comfort of the Kobe A.D. couldn’t make par. In fact, it didn’t even finish the front nine. 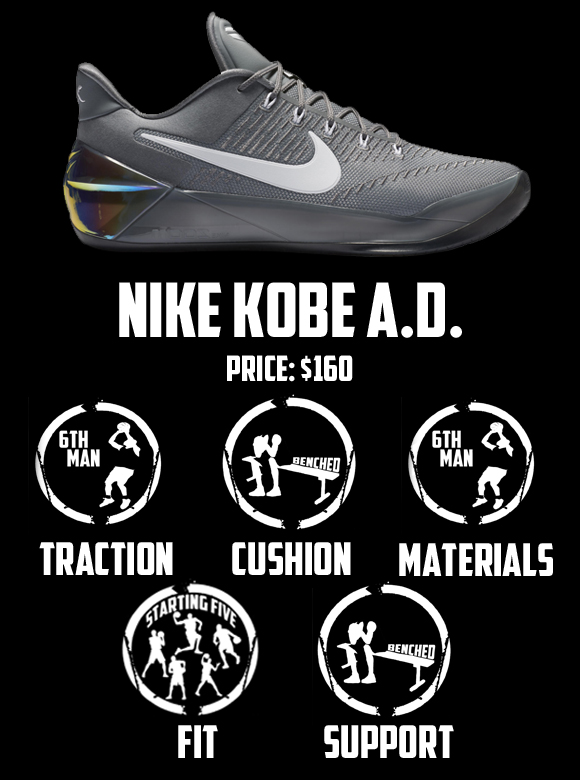