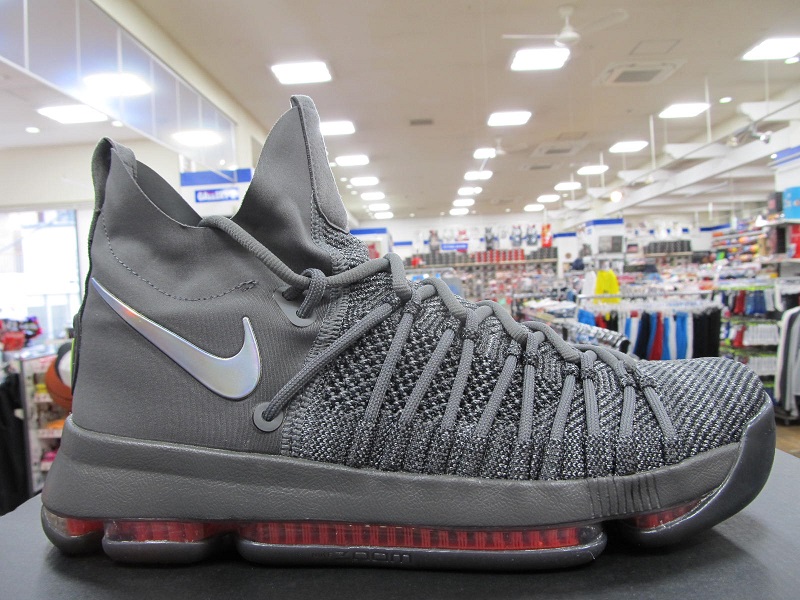 The Nike KD 9 Elite is releasing in Japan way ahead of the U.S. release.

Yes, this is the Nike KD 9 Elite. No need to speculate as Gallery2 — an official Nike/Jordan retailer located in Japan — has a grey-based pair ready to release on February 23. Of course, the KD 9 Elite will not be releasing Stateside on February 23, but we hope to see it available at the beginning of summer. Overall, tech specs look nearly identical to that of the original KD 9 but some things have been modified.

The forefoot area is still Flyknit. However, Flywire makes a dynamic appearance along the outside of the shoe. It’s the lacing system as well, and these are the thickest Flywire strands I think I’ve ever seen. For those that have worn the KD 9, the seam at the midfoot is now removed. This seam caused quite a bit of discomfort until broken-in. It looks as if the seam now runs up the tongue where the compression ankle collar is attached — hopefully this makes for even less break-in time for the upper. Compression makes its way back onto the KD Elite this year, but in a more palatable manner.

I was not a fan of last year’s KD Elite model as it played like an unfinished version of the actual shoe — I’m hoping that is not the case with the KD 9 Elite as I loved the regular version as is.

Price and official U.S. release information should be officially unveiled by Nike soon enough so stay patient if you’re interested in the shoe. Make sure to leave your thoughts on the Nike KD 9 Elite below and stay tuned for updates as they come.