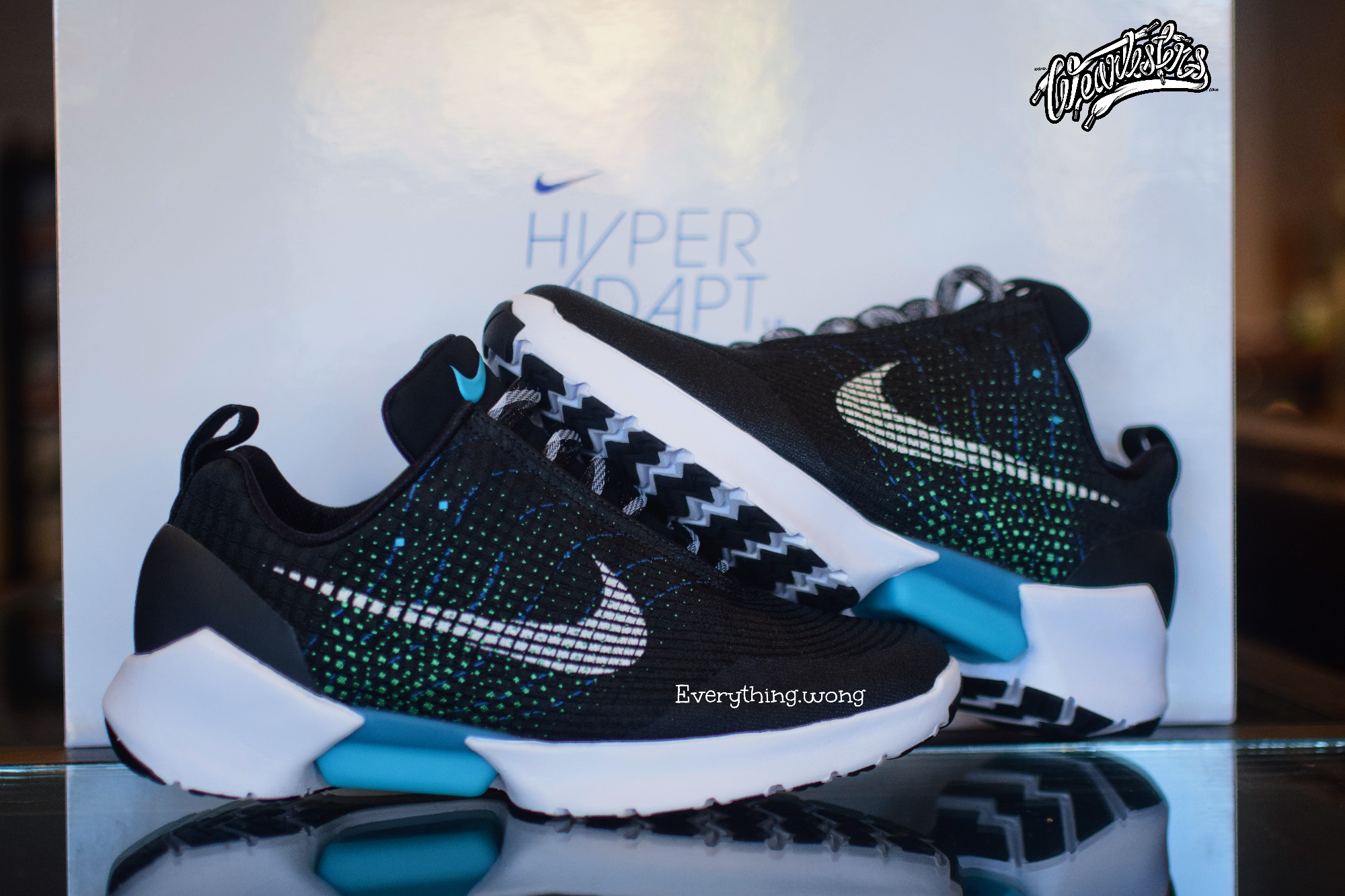 The Nike HyperAdapt 1.0, the Swoosh’s latest auto-lacing sneaker, released at select Nike locations via appointment only starting late November. Following the initial release, more locations opened up for the appointment-based launch procedures. WearTesters was able to get a look at a pair up close and personal so we had to share with all of you.

There are a lot of details that would not be known about the shoe unless you were fortunate enough to purchase a pair. These include lights on the heel of the shoe, special packaging, and that the shoe features sensors that measure tension and weight in the shoe that help create a custom fit for its wearer. The buttons on the shoe do not need to be held down either, simply pressed to activate the sensors and motor. The rest happens by itself, and you can see in the video below.

Each pair of Nike HyperAdapt 1.0s comes with multiple layers of packaging. Seen in the first image below is the box inside a black bag that reads HyperAdapt branding. Following the first layer is a white cover that features similar branding. Then, one can slide off the white cover to reveal a blue box; this is where the goodies are kept.

The top of the blue box can then be lifted to reveal the Nike HyperAdapt 1.0, as well as the hardware needed to charge the shoes and a product card. Each shoe is individually wrapped in plastic and housed in its own padded slot. 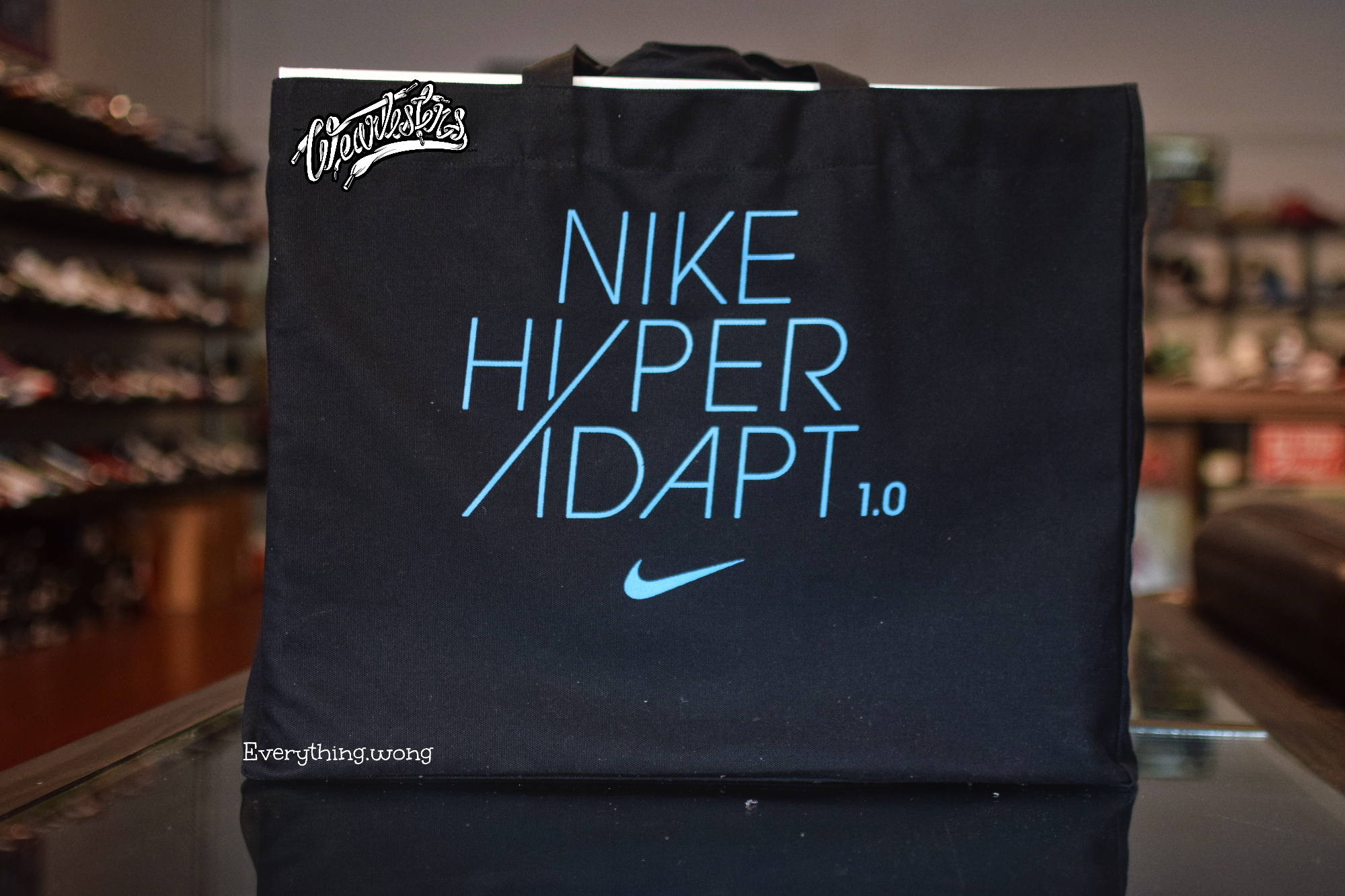 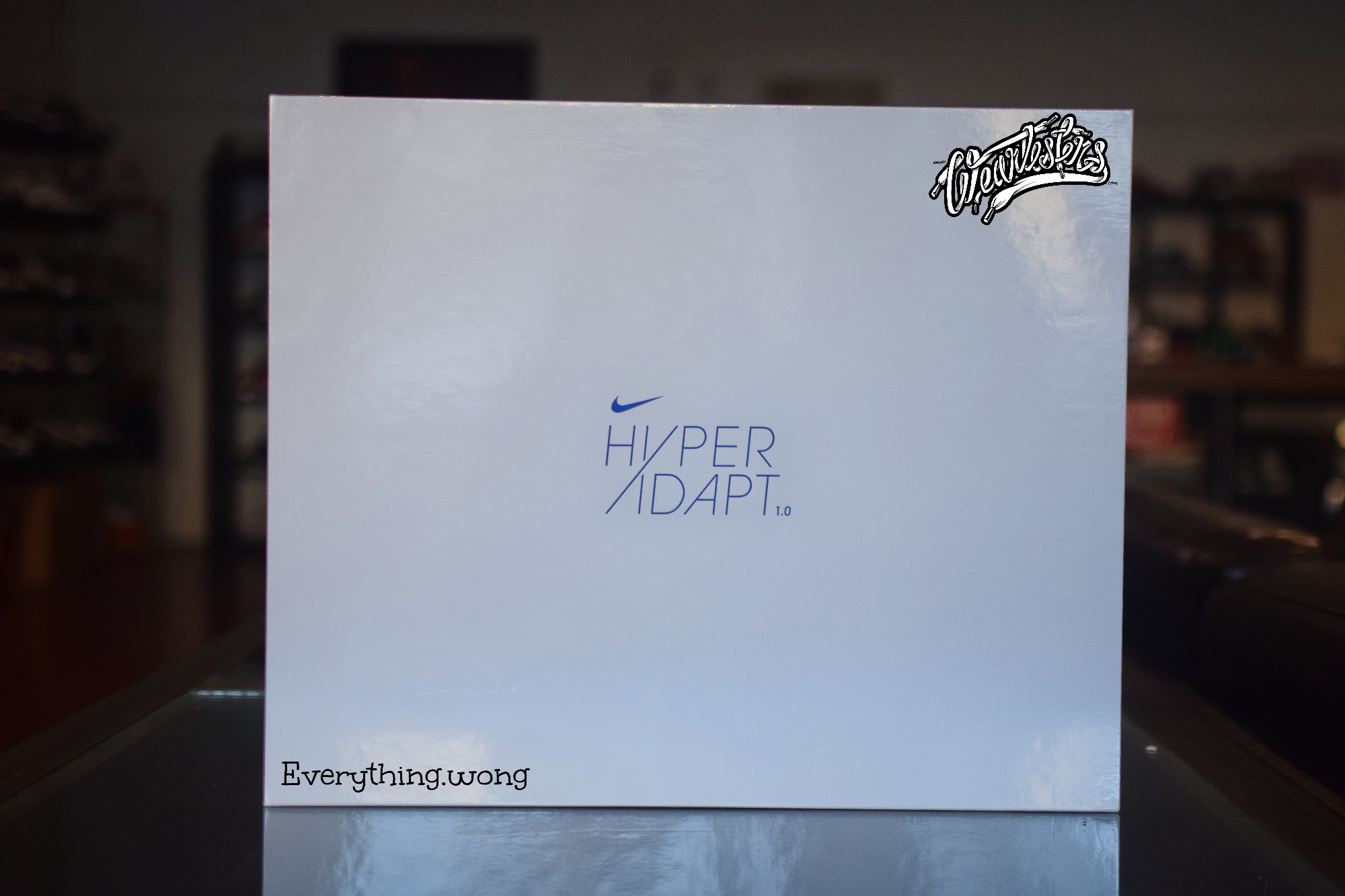 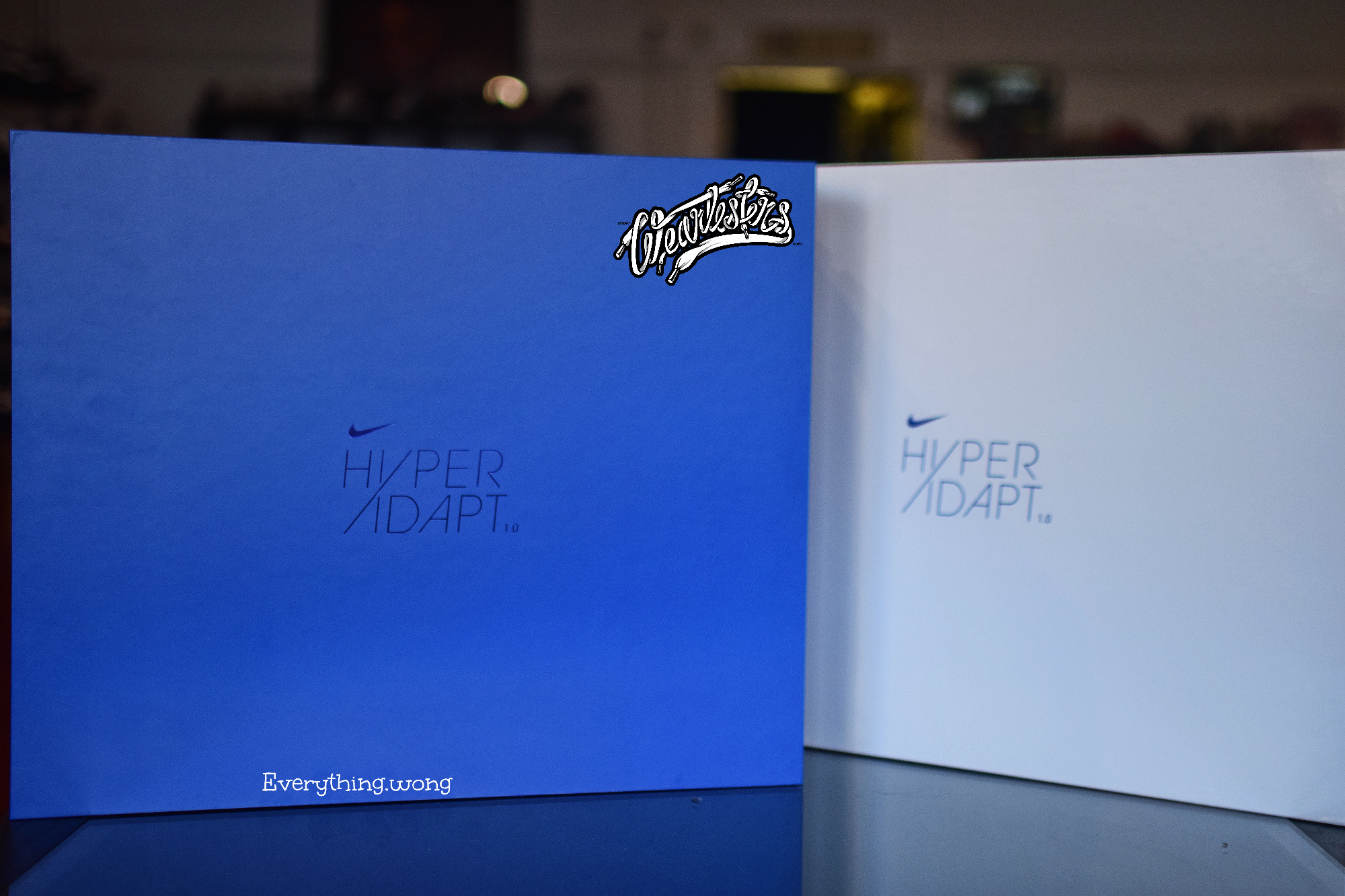 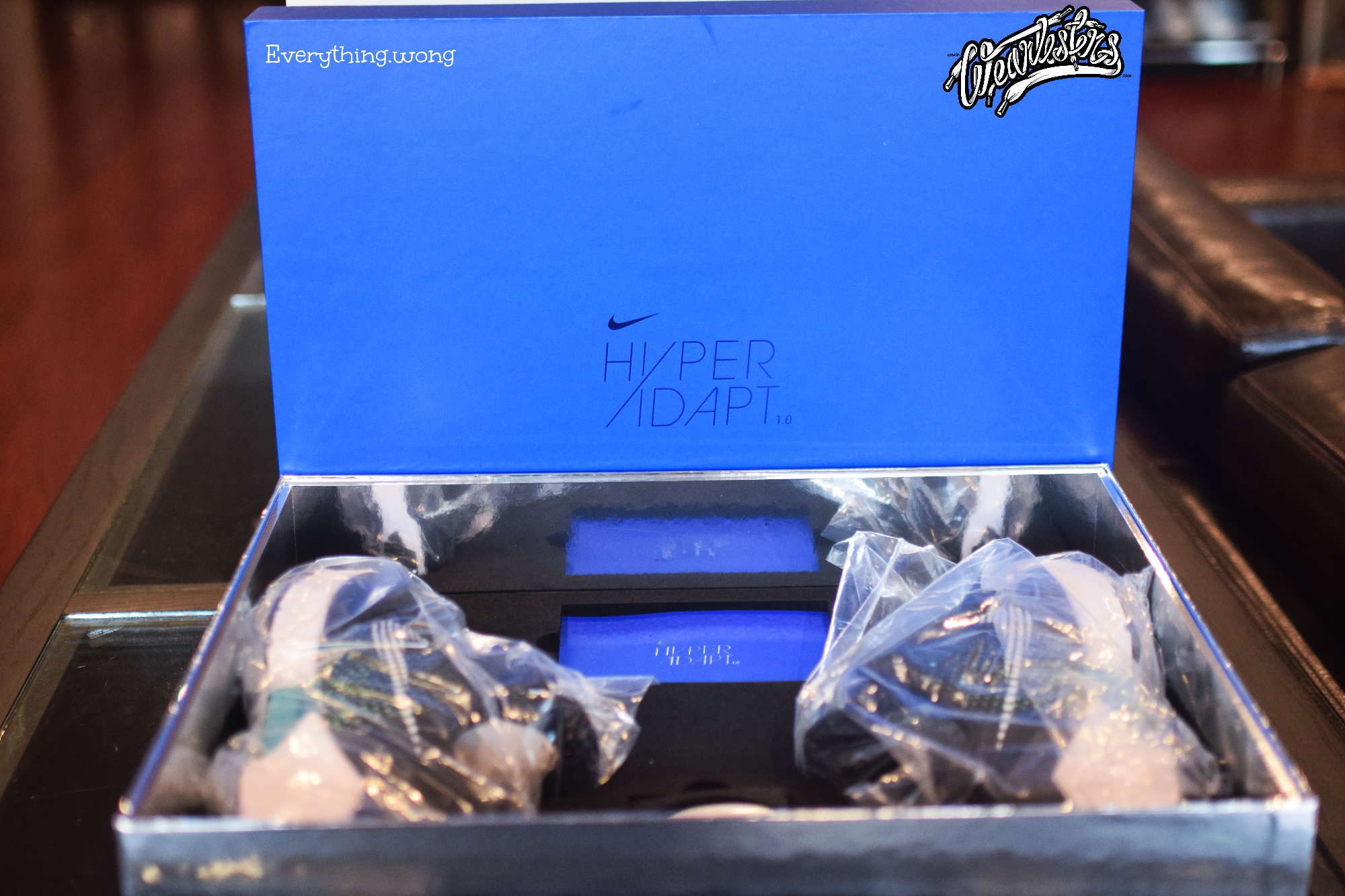 Next is the shoe itself. WearTesters was able to get a look at the black colorway, officially labeled as “Black-White/Blue Lagoon.” The upper is a mix of what you may see on a performance model: mesh and fuse. The mesh is layered in order to protect the strands along the midfoot that control the power lacing. Fuse overlays can be seen in black along the toe of the shoe. The tongue is also black with the right shoe featuring a Swoosh in blue and E.A.R.L on the left, an acronym for Electro Adaptive Reactive Lacing. On the sole is MT² which represents the collaboration between three designers of the shoe: Mark Parker, Tinker Hatfield, and Tiffany Beers.

The lacing engine is seen underfoot in blue. A small detail that some people may not know about the shoe is that the heel area features lights that flash when the lacing system has been activated. The buttons are marked by two small blue dots on the lateral sides of the shoe.

Along with the hidden lights, every pair of Nike HyperAdapt 1.0s is branded with promo tags instead of a retail tag. The shoe was released in very limited quantities and through retail locations, so we thought this was something interesting to note.

Now that you’ve seen the Nike HyperAdapt 1.0 and its features, what are your thoughts on the shoe? Is it an interesting concept with a hefty price tag? Let us know in the comments below.

For more photography by Jordan Wong, including models, cars, and nature, click here. 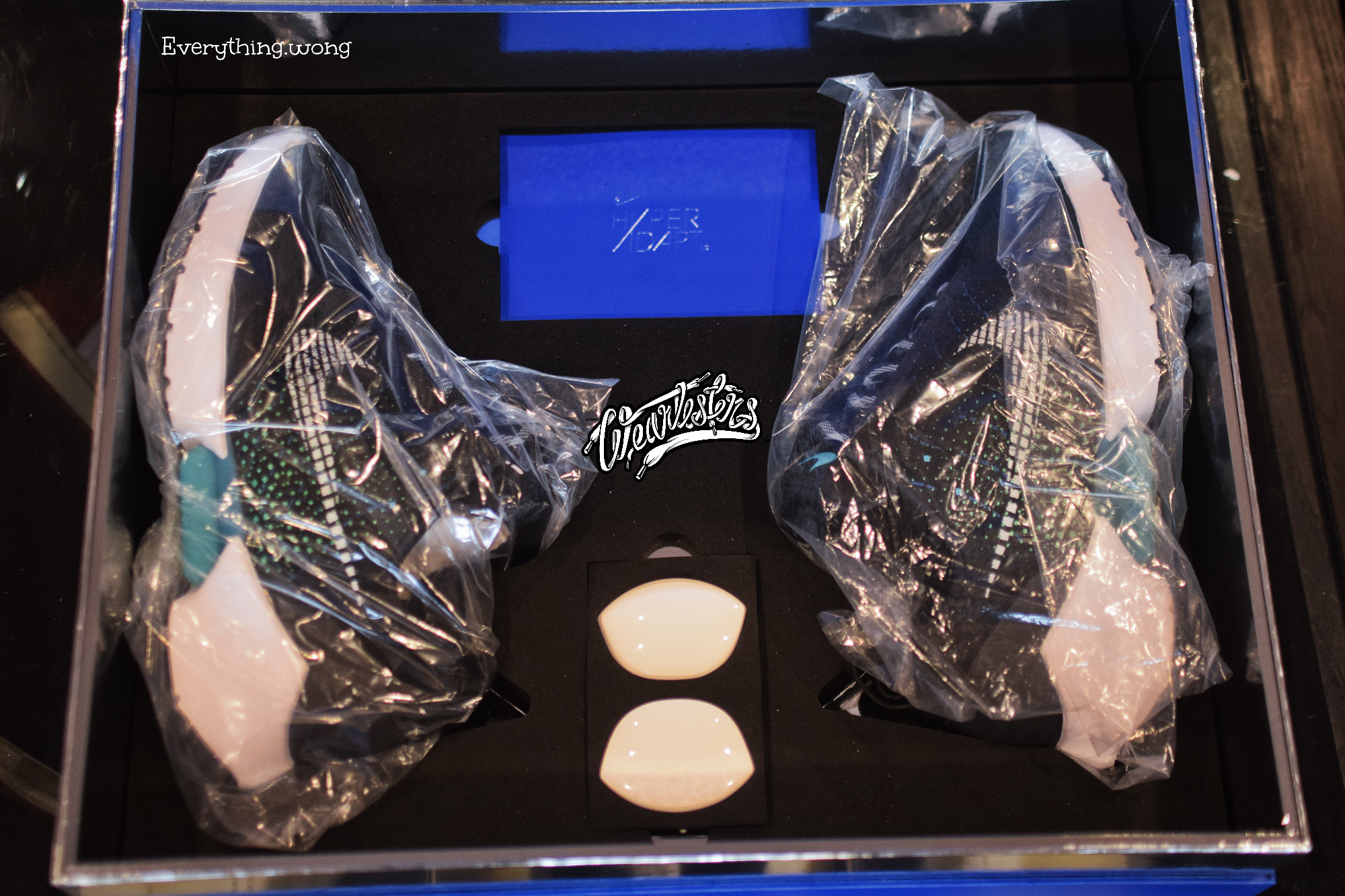 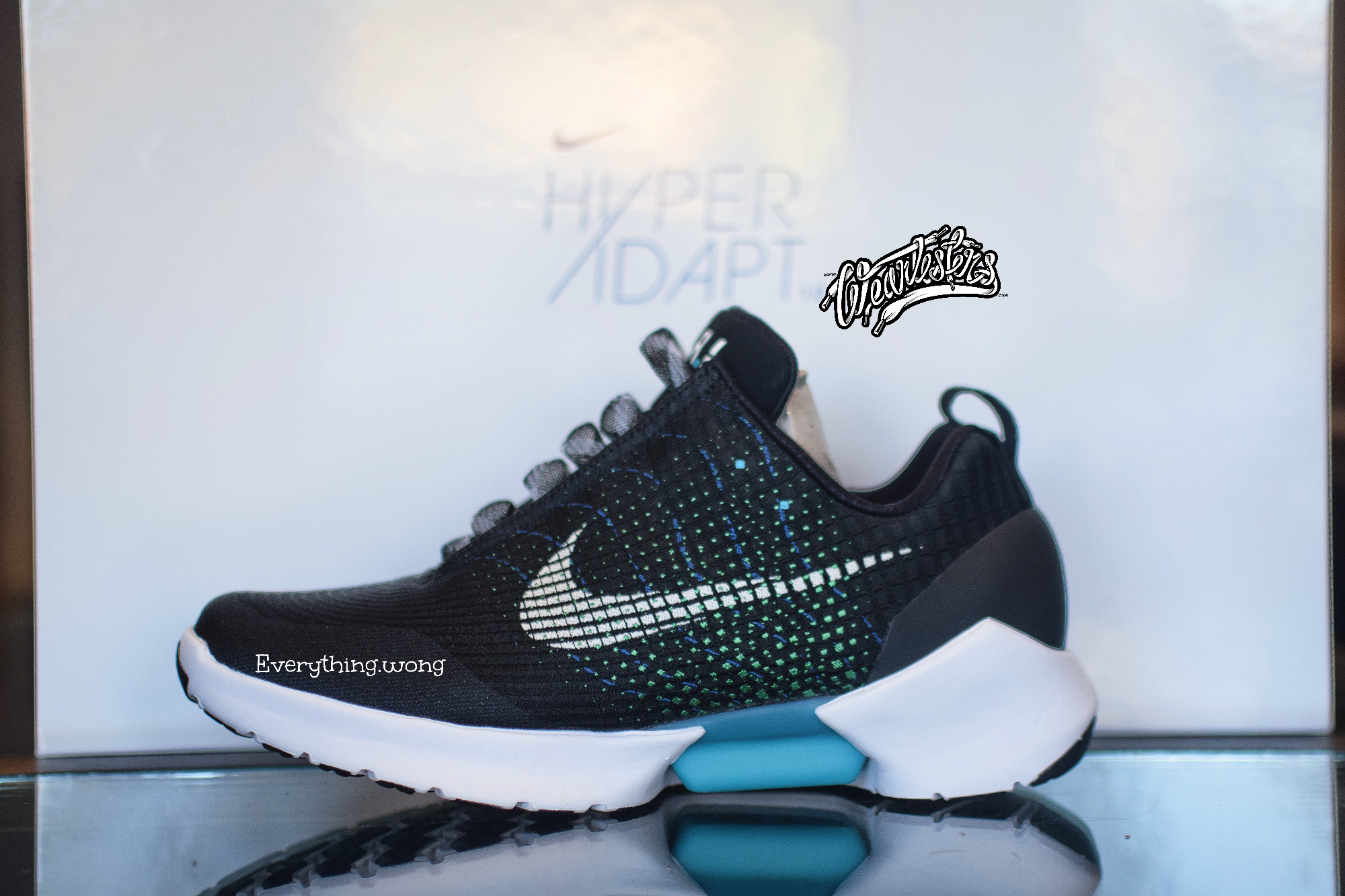 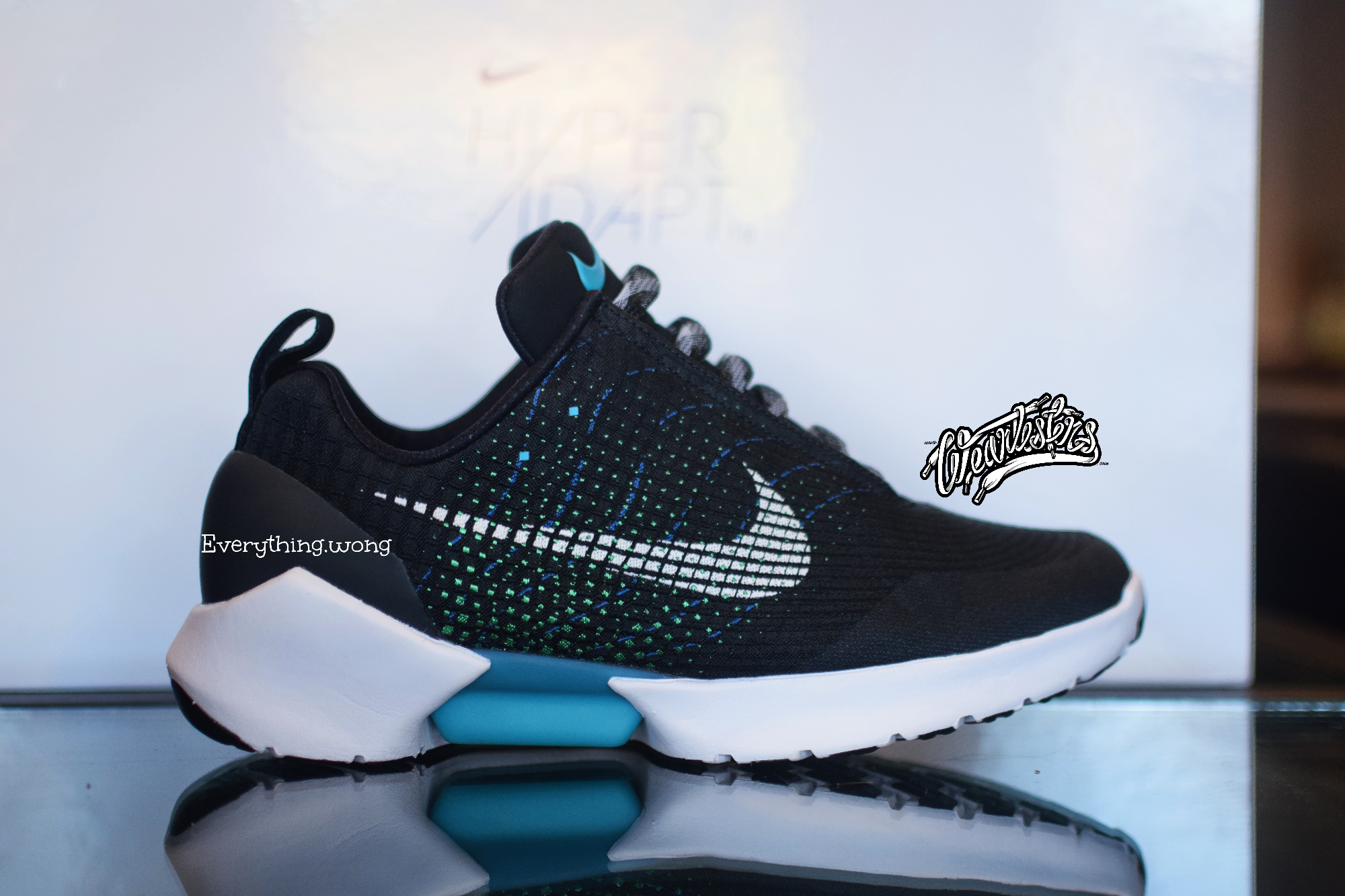 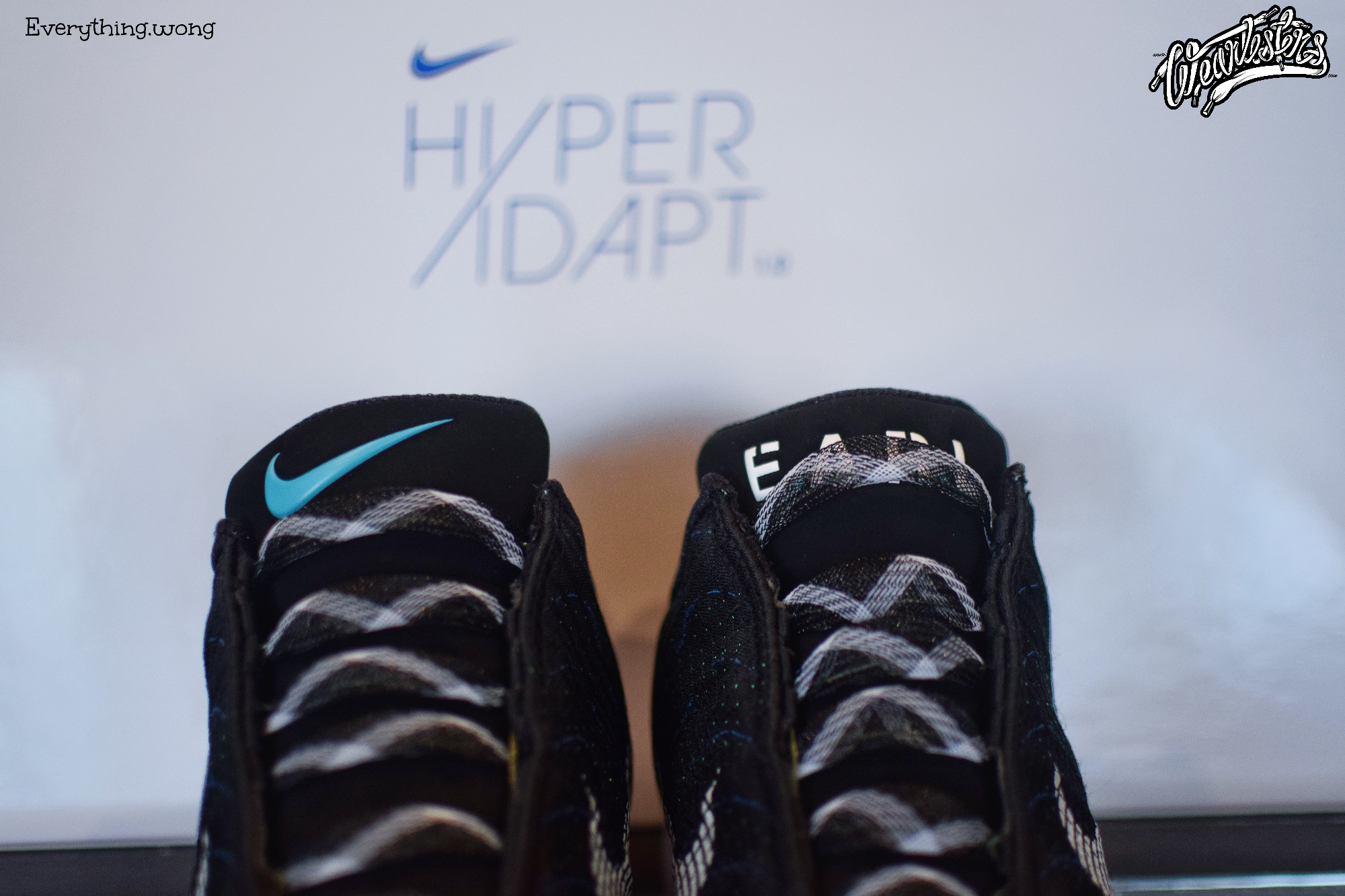 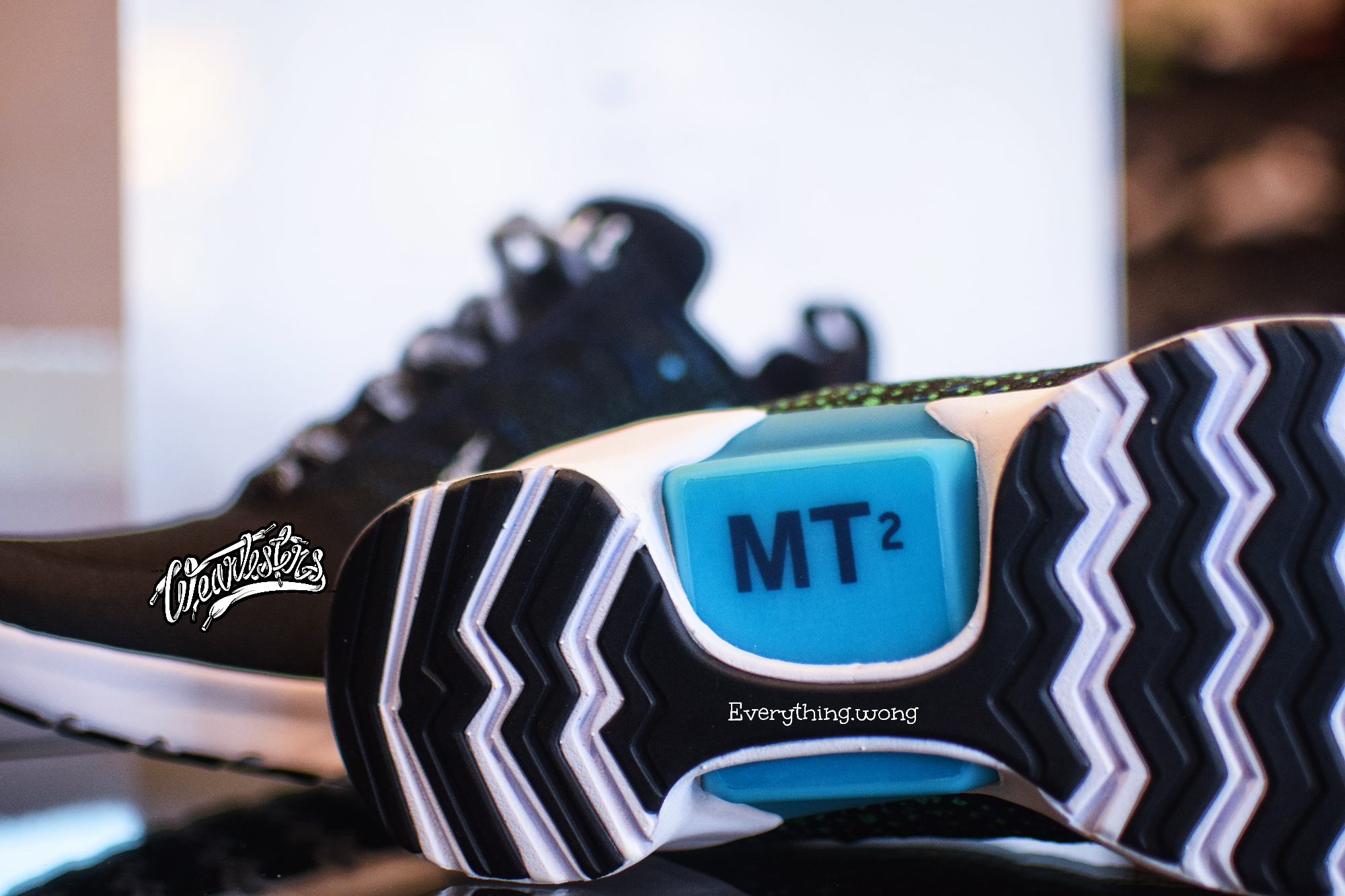 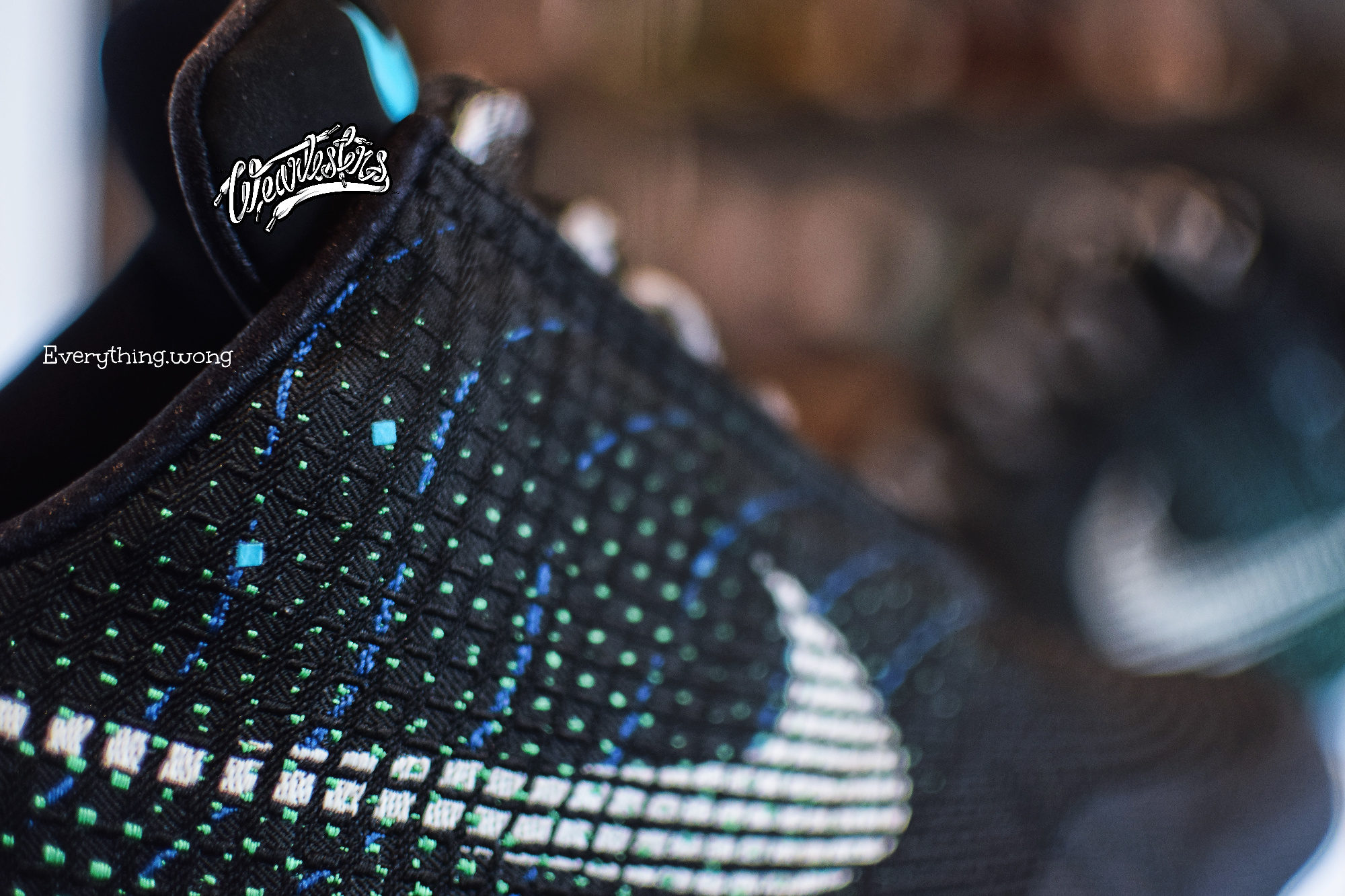 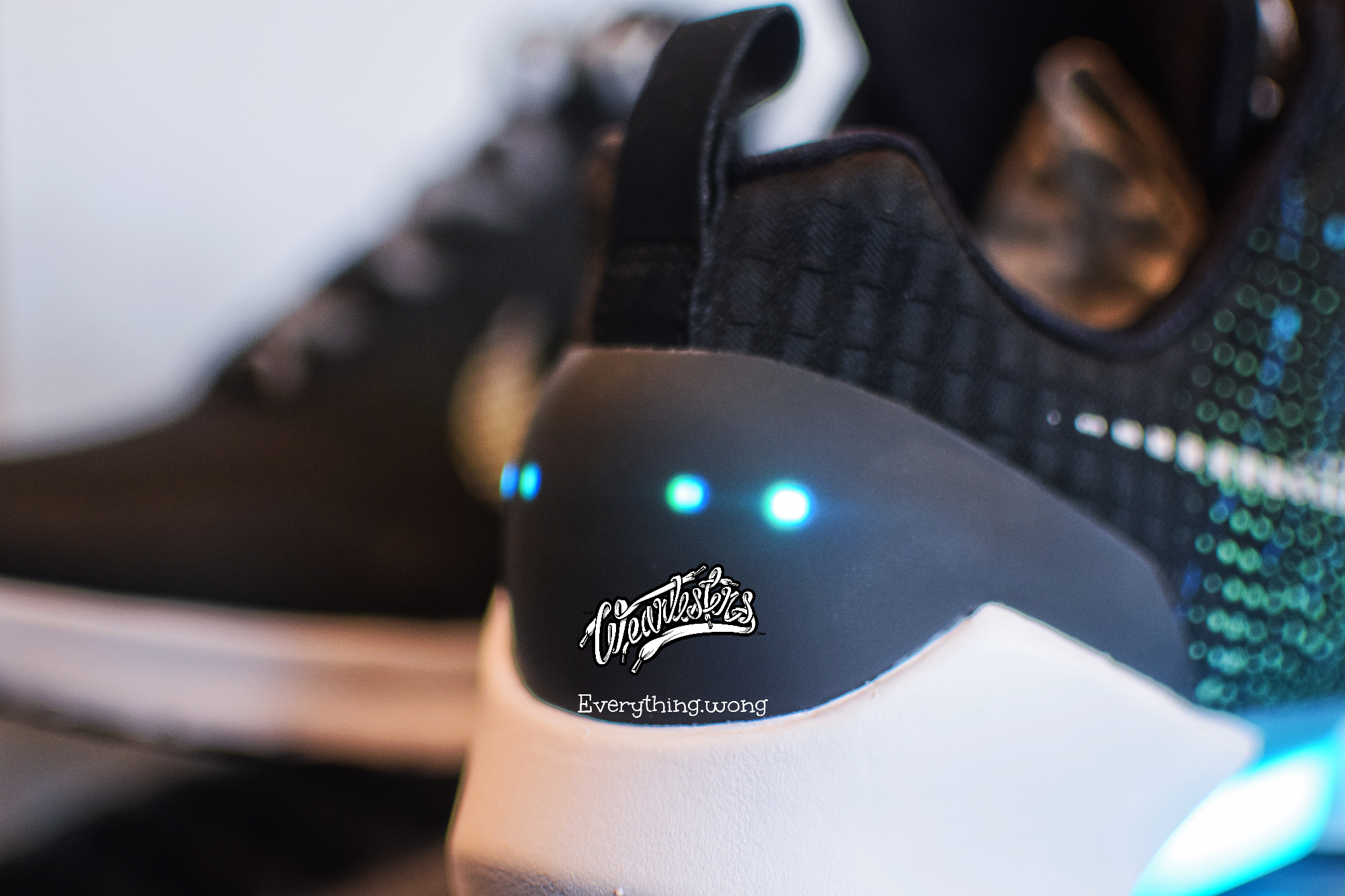 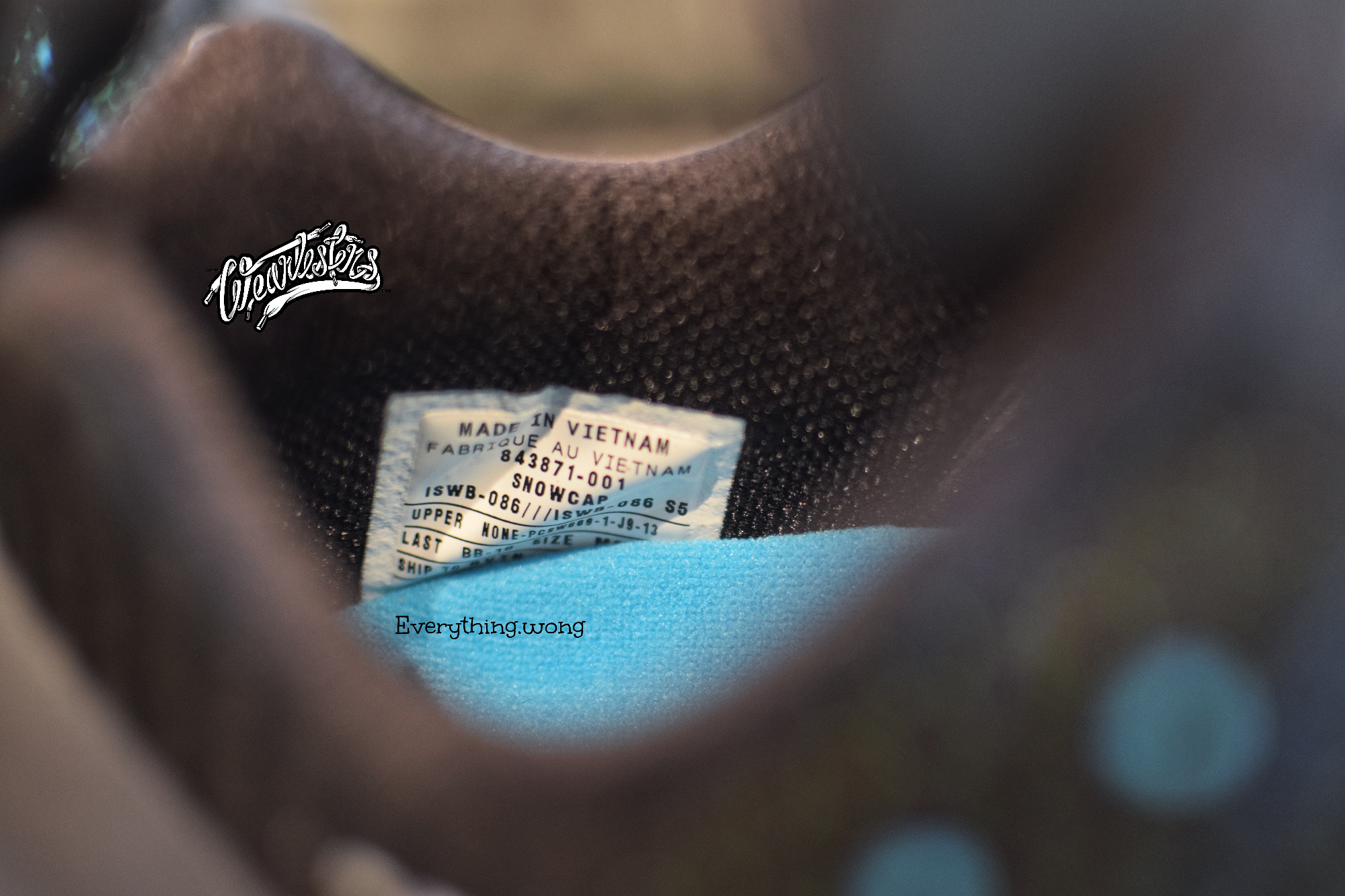