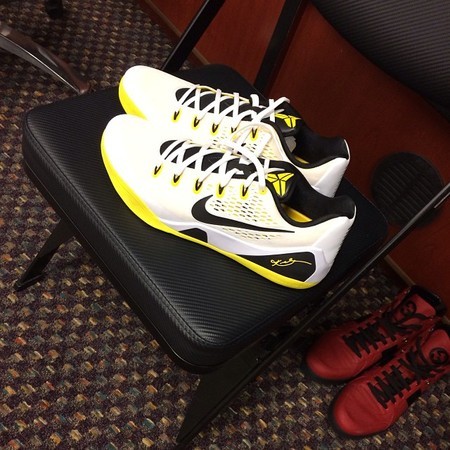 Nick Young seems to be Nike’s guy when it comes to debuting new colorways of the Nike Kobe 9 on court, and once again we see a brand new colorway of the Kobe 9 EM coming from Nick Young’s locker.

This new colorway features white engineered mesh and a contrasting black Nike swoosh on the upper. What is most likely sulfur electric paints the outsole and eyelet’s as well as the Kobe System logo on the tongue. The use of black on the midsole and inner lining contrast the bright colors of white and sulfur electric well to make a very clean colorway. I personally prefer this colorway over the recently released Kobe 9 EM University Gold colorway.

Do you guys prefer this colorway over the recently released Kobe 9 EM “University Gold”? Let us know in the comments section below.