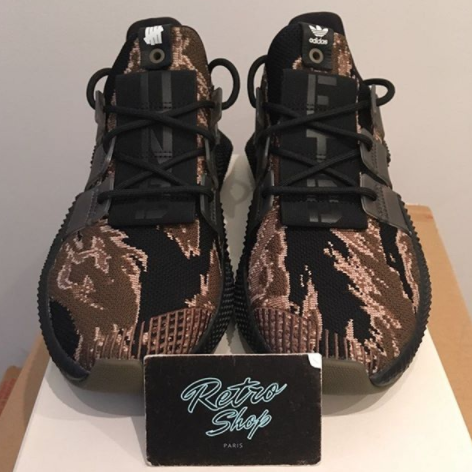 2018 is gonna be a fun one — especially with the adidas Prophere coming.

As 2017 comes to a close, sneakerheads around the globe are already anticipating all the heat that is set to drop next year.

Rumor has it that Undefeated and adidas have been cooking up some special things to help us ring in the new year the right way. In addition to the reported Undefeated x adidas Ultra Boost that is set to drop in Q1 of next year, it appears that the two brands have also been working on two models of the Adizero Adios.

Thanks to French shop @retroshopparis, we have a glimpse at what may seem to be one of the two versions. The low-top silhouette seems to possess a tiger camo pattern found throughout the upper, and is equipped with blacked out Undefeated branding on the lacing system.

According to @py_rates, both of the Adizero Adios models, as well as the Ultra Boosts are set to drop in February 2018. Stay tuned for official release information as we get closer to the date.

Additionally, France’s adidas account (@adidasfr) has confirmed that a new model called the Prophere is coming on December 15 overseas.

What are your thoughts on these potential new models? Sound off below!

*LEAK ALERT*: @adidasoriginals x @UNDEFEATEDinc will be dropping 2 styles of Adizero Adios alongside a pair of UltraBoosts in Feb 2018.
For more details check out the picture below.
Please RT & Follow.
🏴🏴🏴 pic.twitter.com/ikb1ftaqbv