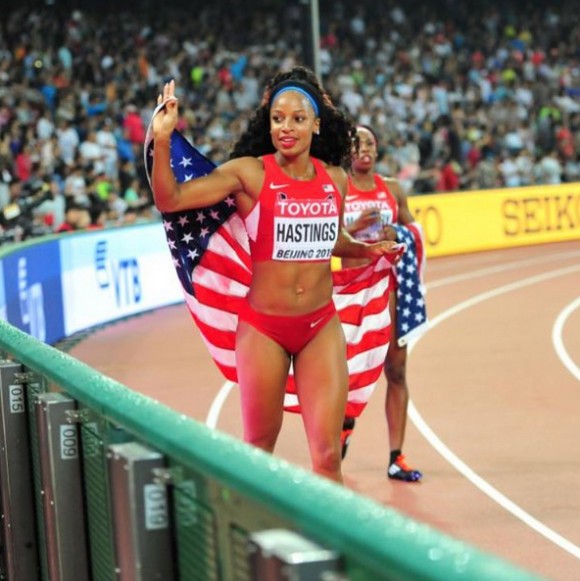 Recently I got the great opportunity to speak with Natasha Hastings, an incredible Olympic Gold Medalist of Jamaican and Trinidadian descent. She won a gold medal in the Women’s 4×400 meter relay at the 2008 Summer Olympics. She’s had many more wins since. We discussed her plans after the coming 2016 Olympics, what the Under Armour x Muhammad Ali collection means to her, and where she stands among the other Under Armour athletes. This isn’t an interview to miss so check it out.

[Noah Goldowitz for WearTesters]: The Olympics are coming up; what’s on your mind right now? What have you been doing this summer, just relaxing?

[Natasha Hastings]: No that’s the thing, we had the World Championships this summer so my season ended about three weeks ago. It’s funny that I keep getting the question about the Olympics because I’m on vacation right now so my mind is kind of off.

[WT]: Everyone needs a vacation.

[NH]: Going in to the Olympic year, of course your focus changes a little bit–they only come around every four years–it’s the moment every Olympic athlete looks forward to. I’m 29 so this is it.

[WT]: So the next Olympics is not in your thoughts?

[NH]: It’s not in my thought process. It’s not to say it won’t happen, or it can’t happen, it’s just 2016 is the one. I’m at that age now where I have to be realistic about how long I’m going to do this so there’s that much more pressure.

[WT]: So if the next Olympics is not in sight for you, what is next? After this Olympics of course. You’re not old, you have your whole life ahead of you!

[NH]: Hopefully my husband will find me so I can get started on a family, that’s something I want to achieve in life. I want to be an entrepreneur; right now I’m in the process of opening a business, hopefully in the first quarter of 2016. I can’t tell you what exactly, I’m still working it out, and I’m also thinking about going back to school. When I was in college I wanted to be a chiropractor, my degree is in exercise science.

[WT]: That’s great! It’s much more inline with what medicine is doing now, some of the Eastern and some of the Western together. So, are you looking for a husband or has he found you?

[NH]: I want my husband to find me. Being an athlete, I’m always the aggressor. So I’m trying this thing where I let the man find me. Everybody wants to be desired, just like I want to feel like a lady.

It only seemed right to get some action at #GleasonGym with this rockstar @onwardnation! I told him to give me all he had but he went easy on me! Lol 💪🏽👊🏽 #UAnext #TeamUA @UnderArmour @MuhammadAli #RuleYourself #MuhammadAli #TeamUA

[WT]: You answered what ‘Rule Yourself’ meant to you on stage. What does this collection [Under Armour x Muhammad Ali] mean to you? Will you be training in it, will you be wearing it? Does it affect you at all?

[NH]: I probably won’t train in it but I’ll definitely rock it. I wear the lifestyle stuff, a lot of it. If you see me in the streets, if I’m not wearing stilettos, I’m rocking Under Armour basketball shoes. I just love the brand, head to toe. How I connect with the brand or the line? As I said earlier, I think Muhammad Ali was a very flashy and he didn’t care how you felt about that, that was a part of what he brought to the ring, no matter if you didn’t like it–that’s me totally. If you don’t like my purple hair or purple lipstick that I decided to run it I’m not going to apologize for being me and being flashy.

What I like about this team is that they champion the female athletes just like the male athletes.

[WT]: How did you get hooked up with Under Armour in the first place? I know this is years ago.

[NH]: It was, at the time I was running “unattached” and the phone call came like “Hey, would you like a sponsor?” and it took off from there.

[WT]: So now you’re four years into it, what do you think they’ve done best for you?

[NH]: It feels generic, but [they’ve made me feel like part of a family]. I’ve been with another shoe company and I felt like nothing. With sponsors, everybody’s afraid to ask and here [with Under Armour] it’s “Well, the worst they could say is no.” I’ve only gotten no twice. They do whatever they can to empower the athlete. When you look at the campaigns, they’re personal; they take the time to get to know the athlete and who it is that they’re representing; they won’t even sign an athlete if they don’t feel that the athlete fits into their story. It’s a generic answer but it’s great when a company speaks to those things and sticks to them.

[WT]: That’s a great answer! Steph Curry is basketball, Tom Brady is football, etc. With the slew of athletes Under Armour has, where do you think you fit into that family?

[NH]: One my first times at Under Armour in a meeting–she’s not the VP of marketing anymore but at the time she was–Adrienne said to me, “We’re looking for female athletes that will stand right next to the male athletes.” If you look at a lot of other brands, the female athlete is often off to the side.

[NH]: Exactly. What I like about this team is that they champion the female athletes just like the male athletes. So I do feel like I’m equal with Steph Curry.

[WT]: As well as women of color, which historically have never been represented equally in this industry.

[NH]: Exactly!! So if you ask me where I stand with those guys, I stand right next to them.

[WT]: Thank you so much for you time, it was great speaking with you!