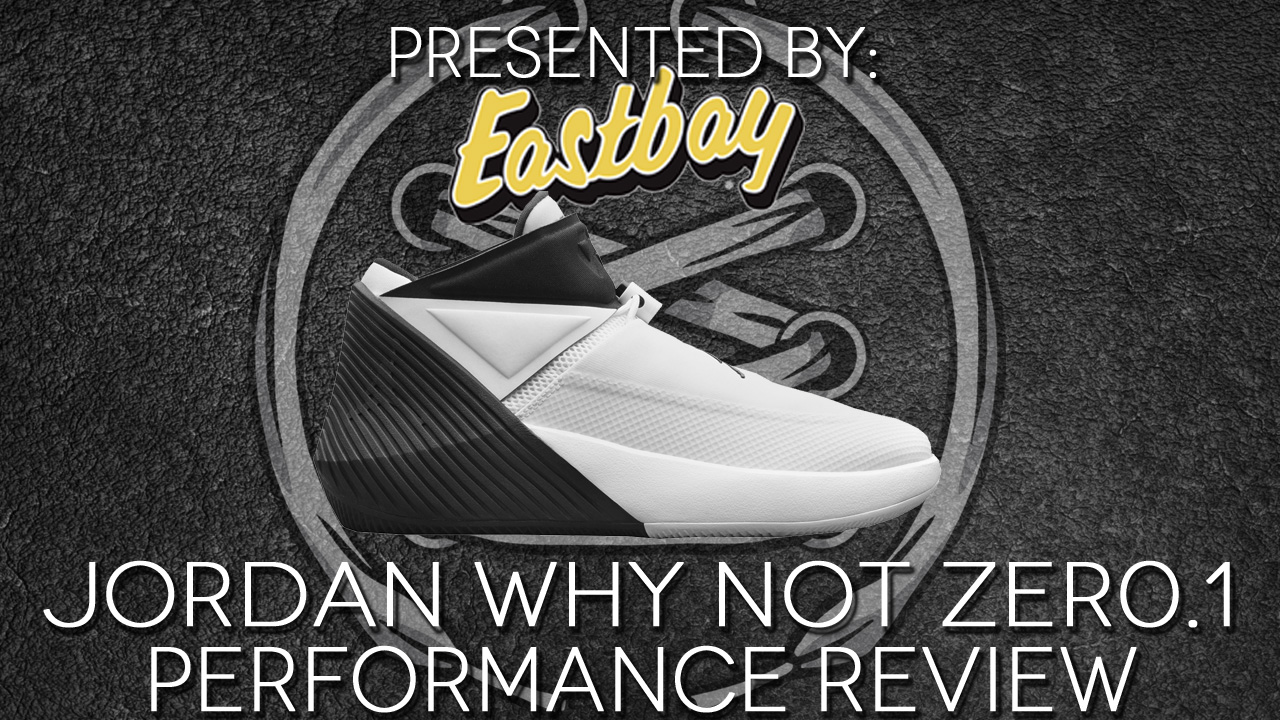 Brodie’s Why Not Zer0.1 kicks are beasts.

You Can Find the Jordan Why Not Zer0.1 at Eastbay.com

I didn’t run into any issues with the traction on the Why Not Zer0.1 for nearly the entire time I was testing the shoe. Most times I’d have have a great experience without worrying at all about the grip. There were a couple of courts that had me wiping the soles free from debris every so often, which wasn’t a big deal, because the grip held in between any wiping just fine.

One court I play on regularly is what I like to call the traction killer. If I take a shoe to that court and it ends up being able to grip then I know the traction is good. This was the one time I slipped while wearing the Why Not Zer0.1 but luckily it was a single occurrence — then it was back to business as usual.

I wouldn’t recommend the shoe for outdoor use as the small nubs that make up the pattern are shallow and likely wouldn’t last too long. However, if you hoop indoors then you should be very satisfied.

Traction on the ‘Mirror Image’ colorway was so good that I can only imagine how much better the traction might bite the floor with solid rubber. Hopefully I’ll be able to get another pair in the future and see how it does.

The Why Not Zer0.1 uses full-length Zoom Air bottom-loaded into a bulky Phylon midsole. Believe it or not, this setup felt awesome — especially in the forefoot.

The midsole that rests between the bottom of your foot and the top of the Zoom unit is very thin. This is likely why you can actually feel the Zoom bounce back while in motion — a feeling that is usually lost when cushion like this is bottom-loaded.

I was unable to feel the heel in the same way as I had the forefoot, but I rarely use my heel so it’s not something that ever bothered me or crossed my mind. All I knew is that I was enjoying the hell out of the ride and had the reassurance that my heel had cushion if needed.

What I loved most is that the Why Not Zer0.1 was a great blend of stability and cushion. The Air Jordan 31 has that bounce we all hope for with Zoom Air, but at times, it felt wobbly or unstable. The Air Jordan 32 felt much more stable in comparison, but it was very stiff until broken-in (then you’d begin to feel that slight bounce in your stride). The Why Not Zer0.1 was a bit of both the Air Jordan 31 and 32; it offered all the stability of the stiffer setup without requiring quite the same amount of break-in time.

If you’ve enjoyed full-length Zoom Air hoop shoes of the past then you’ll likely reminisce a bit while wearing these. Models like the Air Jordan 12, Air Jordan 18, and Zoom Flight 96 will all ring a bell — if you’ve worn them — although you’ll notice that these weigh much less and feel much less restrictive while in motion.

We all know I’m not a huge fan of plasticy materials that are found on modern basketball shoes, but I never mind them when they feel nice and work well once on-foot. That’s pretty much where I’m at with the Why Not Zer0.1. The materials you see here are like a fuse but feel more like a vinyl. This allowed the materials to flex and move beautifully with the foot while still retaining strength and durability that you typically receive from TPU builds.

Under the vinyl-like upper is a basic mesh. It isn’t anything really special, but it’s comfortable as hell and works well with the material that’s been heat-welded onto it. Surprisingly, there were no hot spots or pinching areas for me — even with the lack of ventilation —  which was a huge plus.

The shoe is definitely not premium, but it works — and works really well. I can’t speak on behalf of others, but for me, that’s a win.

I almost started the review out of my typical order just so I could go over my favorite part first — the fit is fan-freaking-tastic!

The Why Not Zer0.1 fit true to size for me both in length and width, with the width being the standout feature in the fit. The shoe feels like it vacuum seals your foot inside it without too much pressure (which would make your foot numb).

Those of you that tie your laces up tight and have been adjusting to the thin tongue era post 2008 should know that I’m talking about — that numbing foot fatigue feeling where you think that you left your foot behind you on the court had you not looked down and seen it still attached to your leg. Yeah, these don’t do that. They suck you into the upper and comfortably keep you there.

How would this feel for wide footers? That’s a great question, and one that I’m not accurately able to answer (but Duke4005 is slightly wide footed so check out his performance review). There are some shoes that you can tell some may have to go up 1/2 size in order to make work, but with a shoe built like this — with the overlay that doesn’t stretch at all — it’s hard for me to guess on what someone with a wider foot would want. Try them on in-store prior to purchasing.

Due to the vacuum seal like fit, the lockdown is incredible. If you’ve ever worn the Air Jordan XX8, with the full zipper shroud, that’s what wearing the Why Not Zer0.1 was like. I just felt secure — like I was locked in the arms of Bam Bam Bigelow (RIP). If you value a shoe that fits like a glove then you’re going to love the Why Not Zer0.1.

The design of the midsole, outsole, and the fit all play into the support nicely. The wide flat base promotes a ton of stability, while the bulky midsole acts as one of the gnarliest outriggers of all-time.

I get people closing out on me while I’m shooting all the time. With that come several ankle tweaks each week. The Why Not Zer0.1 helped when landing on someone’s foot because I didn’t roll completely over and was able to re-stabilize quickly and keep it moving — thank goodness.

That giant extended Phylon heel counter that we were all worried about: it turns out it’s awesometacular! Shout out to Jeremy Jahns! This giant heel counter keeps the heel stable and on the footbed — which is actual support for the foot/ankle. Ankle support has nothing to do with collar height — yes, I’ll continue to be a broken record on that so long as people continue to think height of a shoe equals ankle support.

This heel counter also moves into the middle of the midsole and helps stabilize it — so much so that it’s hard as hell to twist the midsole or fold it in half. I say this because the shoe doesn’t feature a shank, something I was concerned with until I played in it.

The design team was able to keep the weight of the shoe down while still keeping the midsole support strong and intact. Some may feel that the look is polarizing, but I think that’s the point. It pushes the consumer to feel some way about the shoe upon an initial look. Whether you feel that it looks good or looks strange, it’s polarizing look should intrigue most to at least walk over to the shelf and pick them up — even if it’s just to think “WTF?”

What a fantastic shoe this is. I’m not a fan of Russell Westbrook, but man, do I love playing in his shoe. It just feels…right. It’s a well balanced performer in every category.

There are so many footwear options in the PG category at the moment that there is something for everyone. Those that prefer something light, nimble, and stable while sitting low to the ground have the Curry 4. If you want something a bit stronger along the upper for the fast start and stop PG then the Dame 4 and Kyrie 4 are both great options. If you wanted a shoe that offers a bit of everything you’ll want to go with the Why Not Zer0.1.

It’s hard to believe Jordan Brand was able to start Russell’s signature performance line off with such a bang. Like adidas’ Harden line, it’ll be interesting to see if Jordan Brand can top this with Westbrook’s second shoe — perhaps we’ve seen the best it’s got from the jump. 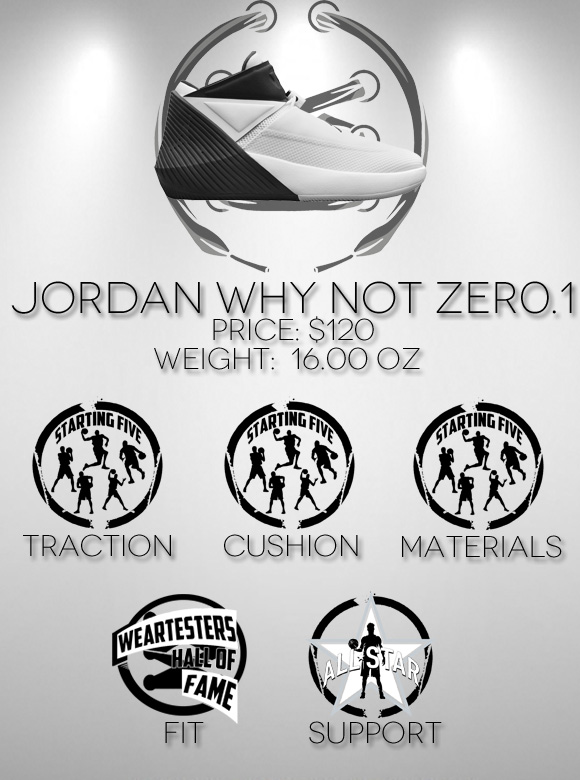