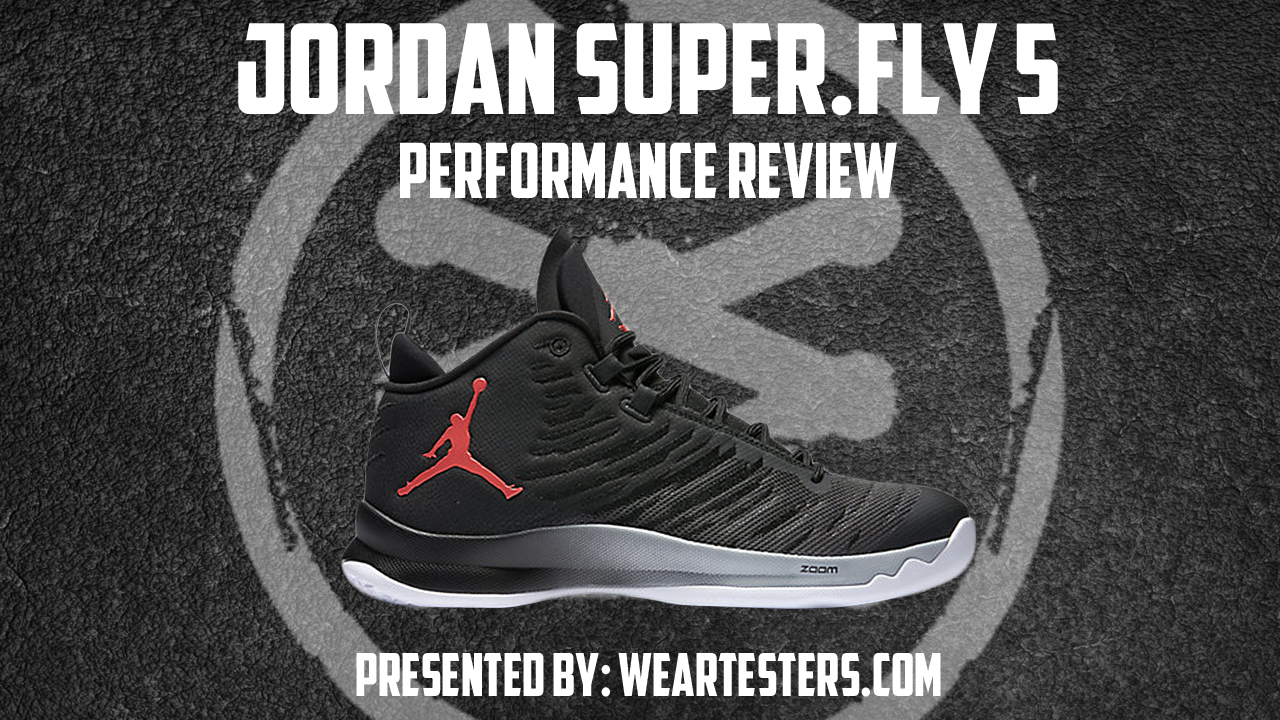 TRACTION – It isn’t herringbone, but not bad. The pattern is set up in various quadrilateral shapes (knowledge, kids) that run like a map of the foot. The shapes are a little tighter in pressure points — under the ball of the foot, lateral side of the midfoot, back of the heel — giving better dig power in spots where it’s needed. The rubber is a good medium hardness, but the treads aren’t exactly deep, so on smooth tennis-style outdoor courts they should last. On those rough courts, beware. Indoor, nothing special, but not bad (a common theme so get ready). The Super.Fly 5 isn’t a “breaking ankles” court grabber but while playing there were no slipping problems either. It’s just solid.

CUSHIONING – Boo. Boo, like, mother-loving BOO. C’mon, was Unlocked Zoom really that expensive? Still nothing in the heel and the forefoot has an oval Zoom unit that feels…okay, but nothing special. Surrounded by Phylon, it takes a few wears to break in and feel the little response there is, but eventually it does become serviceable. Not good, but serviceable. There is no real Zoom feel, much like the Ascention.

The heel is strictly foam, again, but without the cored section in the middle for compression. Again, just Phylon, and again, it does a decent job of impact protection, but is lagging far behind a shoe with Boost, Jetlon, or a good Zoom unit. That said, my feet felt good after playing and I didn’t have any additional fatigue or aches from playing in them. The Super.Fly 5 just feels…normal.

MATERIALS – Based on the looks and the materials of the Super.Fly 4 last year, the mesh looked soft and pliable. The eyes deceive because the forefoot and midfoot use a thick stiff mesh more along the lines of the Super.Fly 3 or Hyperdunk 2015. This material transitions into a synthetic leather lateral ankle and heel wrap that is more pliable than the forefoot (that’s about backwards). The detail stitching on the mesh is just that — purely for looks with no performance benefits, but it does break up the look.

A fuse layer covers the toebox over the big toe for, you guessed it, toe-draggers. There is a full-length split sleeve (it splits right at the ankle) to keep the inside soft and cozy, while the ankle has the same fit pad system as the Melo M11 (WAY better than the Jordan XXX). The tongue is super thin and @#$&%!* SHARP on top so don’t wear ankle socks unless you like bleeding. However, it’s well padded with good ventilation through the body. Overall, the materials are nothing new, and seem to be stiff, but the lacing system lets you pull up snug and they are durable as hell.

FIT – Fit is really, really nice. Shoes with stiff uppers tend not to bend and move with the foot, but the internal bootie and lacing system hold every time. The ankle pads are placed perfectly to stop heel slip and the forefoot has a little empty space — nothing too bad to deal with. The lacing system is the superstar here: seven lace holes for plenty of adjustment and the second lacestrap actually ties directly into the heel counter and pulls the shoe all the way up. The shoe should fit wide footers well without going up a size. If you have a really narrow foot, maybe a half size down, but with the shoe able to pull tight TTS should be fine for most.

SUPPORT – Like all of the past Super.Flys, support is a definite strong point, and again, it all ties into the lacing system and fit. There are no special support features and Jordan Brand even deleted any sort of midfoot shank from the blueprint. However, the Phylon under the midfoot is sculpted under the arch for a little bridge. The heel counter is pliable but runs almost all the way back to the midfoot, and when coupled with the fit strap, really wraps the heel and works to hold the foot upright. There is no outrigger at the forefoot, but the Super.Fly 5 rides low (remember, small Zoom) and the base is wide.

OVERALL – It’s a difficult shoe to review. The Super.Fly line started out as a very good performer, and was an honest team option for Jordan lovers (or if you didn’t have $200+ for the signature shoe). However, the Super.fly 5 is a step back from the 4, mostly because of the lack of Zoom. The 2, 3, and 4 all had the FlightPlate/Speed system coupled with Unlocked Zoom. For the 5 to go back to a thin oval bag seems very…telling.

Normally we don’t consider price in reviews — only if the shoe performs — but the price increase for less technology can’t be ignored, especially when other brands, including Nike, are bringing shoes out at the same price point with vastly superior technology. If the Super.Fly 5 was priced in the $90-$105 range it would make the performance easier to swallow.

Overall, the Super.Fly 5 is a “sum is better than the parts” shoe as no category stood out as masterful. For the market demands today it just doesn’t hang. Good luck next year, Blake.