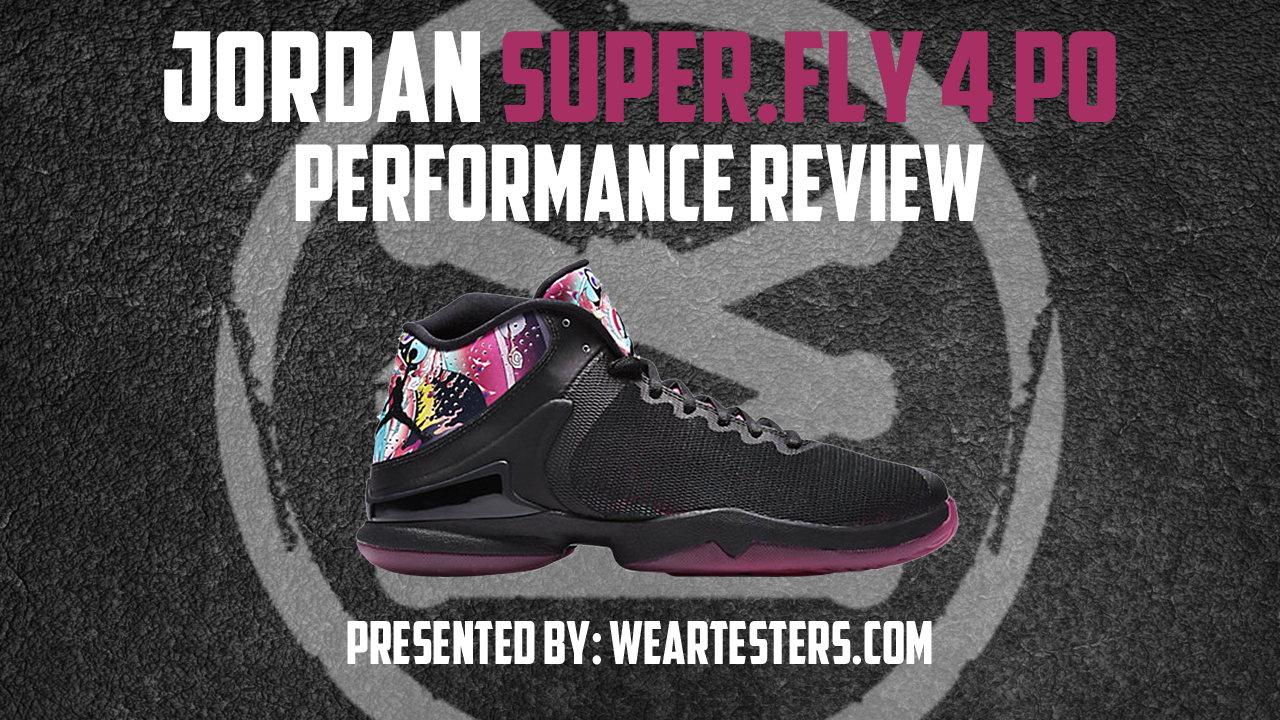 MATERIALS – Okay, materials are improved, for the most part. As I have said, many times, I love leather shoes. Something about the creasing and break in to form to the foot. Where the original SF4 had a padded mesh upper, or the Jacquard version (REALLY underrated), the PO goes for leather heel collar and medial panel. The Chinese New Year (CNY) reviewed here is a patent to allow for the design overlay, but the regular PO is leather. The rest of the shoe is the same mesh as the SF4 but with the back padding removed, making for a little sleeker fit and better break in, but losing some comfort. Outsole and midsole are the exact same as the SF4.

TRACTION – Same as the SF4, but if you don’t want to follow the link, here is what I said: squeaky and tight, even just walking around. I even got squeaks on my concrete driveway. More due to the materials than just pattern, this shoe was on when it counted. Those lovely 24 Hour Fitness courts are nasty by Wednesday (Monday and Tuesday ain’t great either) but the Super.Fly 4 put in work.

I really liked the wavy forefoot pattern under the toes. Not often do I notice a difference in a pattern, but on toe off I could tell it wasn’t herringbone but a smoother transition. The segregation channels in the heel and forefoot also let the shoe dig into the court and hold on takeoffs, something I noticed when making cuts and coming through the lane. The lower I got, the better the shoe felt on those moves. I do not think the outdoor courts will love this shoe — the rubber is soft and pliable and the pattern is shallow. Look elsewhere for an outdoor shoe — which is a shame, because the Super.Fly 2 and 3 were great outdoors. I could be wrong, but with bottom-loaded Zoom the last thing you want is the outsole wearing through.

CUSHIONING – Again, same as the SF4, with one change: the J Zoom feels WAY better from the start with no break in time. Here goes: the Super.Fly 4 is more Jordan XX9 than XX8. Again, not bad; the XX9 got the job done, it just didn’t bounce like the XX8. The XX9 also didn’t explode like the XX8, so there is your trade-off. The unit sits almost even with the rest of the outsole instead of protruding so the unstable feel found in first generation Unlocked is gone.

Once broken in, the SF4 rides low and tight and I felt extremely quick on my toes and when running. The response time is great with no lagging feel delay in reaction. It just isn’t special, which is more on me than Jordan. I have been so impressed with JB innovation and performance the last three years that I fully expect EVERY shoe to have a “wow” factor, so when they don’t I am like a kid with a broken toy. The J Zoom is great for guards and wings and once broken in is lovely.

The heel is foam again (Phylon) and again, does the job of absorbing impact and bouncing back. I never felt lessened by a lack of Air, but there was just protection, no performance, in the heel.

FIT – Finally, we have a difference. Length and width-wise we are looking at the same — fairly narrow but normal width will be okay. It can be little tight round the midfoot, but nothing a simple lace-loosening and some break in time won’t take care of. The midfoot is the new; it’s structured with a wrap-style tongue, from medial to lateral, the Flight Web system draws the foot completely into the shoe, like an Air Snuggie. The tongue and ankle have a denser padding, like the memory foam of years back, and the more heat build-up the better those areas feel and form. When laced playing tight, there is NO MOVEMENT from any area. Couple the tongue structure with the lack of foam backing the mesh and we get a highly flexible, form-fitting performer. I will say, no-show socks beware: the ankle padding is a little harsher than the SF4.

STABILITY/SUPPORT – Same as the SF4, but here goes: Jordan tried and true — the FlightSpeed plate is the new FlightPlate from the last two years, and that is a good thing. Along with distributing the responsive bounce from Unlocked Zoom across the foot, the Plate/Speed also gives the shoe its torsional support. For those new to this, torsional support keeps the shoe from bending in the wrong places but does allow the shoe to bend in the right ones. In the middle, you don’t want the shoe to bend down. With the segregated outsoles (forefoot and heel are two different pieces) you get some opposite-bending possibilities. Plate/Speed prevents that by being stiff and holding tight. It is not as stiff as a carbon fiber plate, but CF tended to be too stiff and caused foot fatigue from working harder to create good bend. The TPU plate in the Super.Fly 4 makes transition smooth and not slappy at all — another feature of a softer plate.

There is no outrigger to be found in the forefoot, so you have to depend on the fit and low ride to keep you stable up front. Again, not a bad thing; some outriggers leave the forefoot feeling wide and slow. If the shoe is lower in profile, not a problem.

OVERALL – The Jordan Super.Fly 4 PO is comprised of as many minor improvements as a company can make while keeping the performance aspects that worked. I really, REALLY like the new materials because they add to the fit and comfort. The cushioning is typical Jordan Flight system, and it works — just enough rebound without feeling unstable, but still low enough to get good court feel.

If you are looking for a form-fitting, well cushioned, all-around shoe, look no further. The materials should last a season indoors and Unlocked Zoom is still the best cushioning system Jordan Brand (or Nike) has. Sometimes minor changes do work.