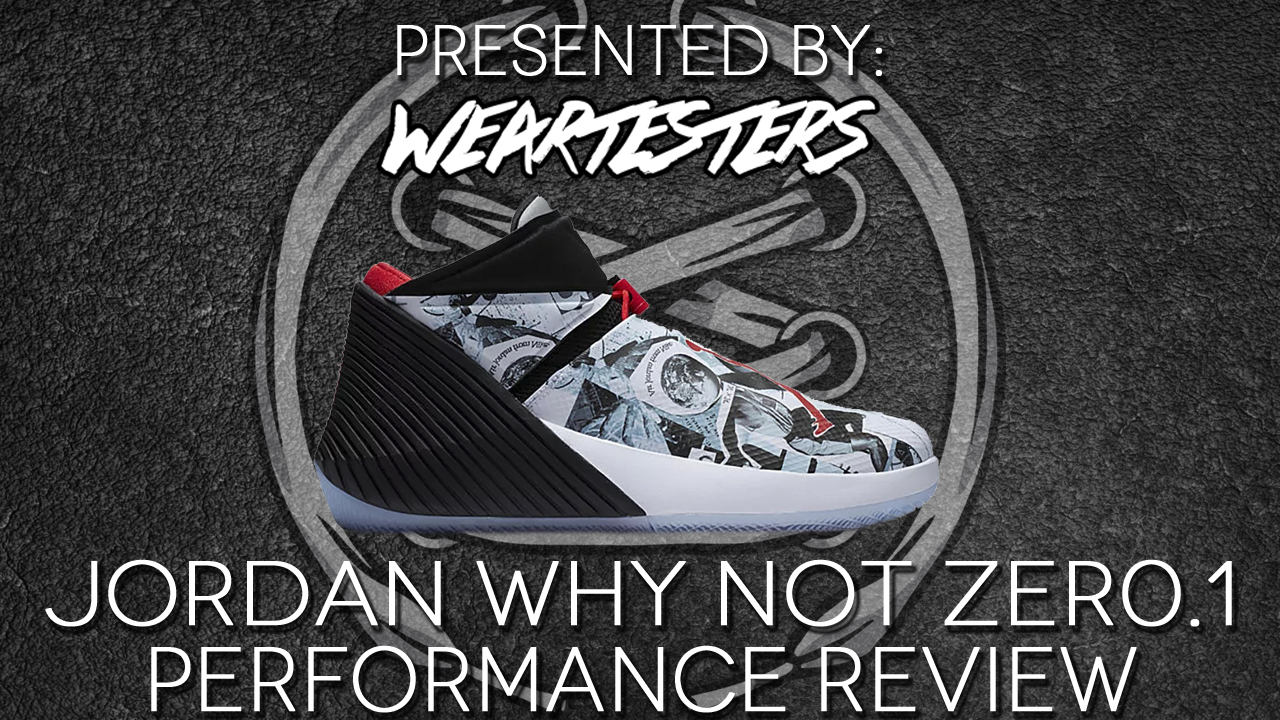 It has been a long time since Jordan Brand blessed an athlete with a signature shoe; the last one was Chris Paul, and he is on shoe number 10. 10 years and no new blood on the market. What is a brand to do? Well, since it already has the reigning MVP on the roster, how about dropping a line for his feet.

With the plan in place, we give you the Jordan Why Not Zer0.1 Performance Review. Let’s go… 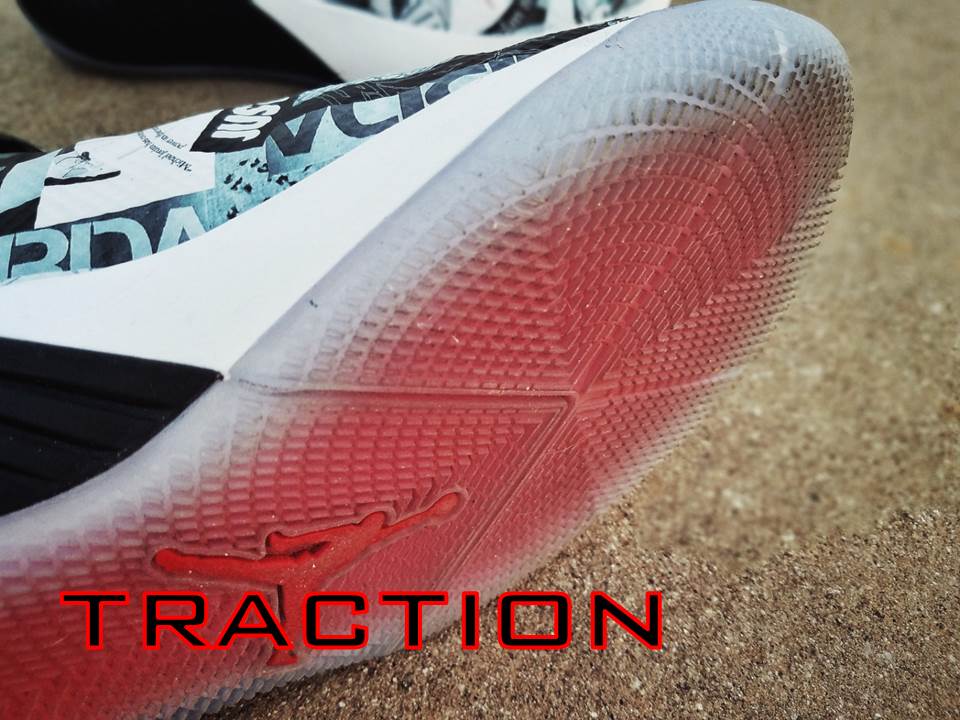 From the pattern alone, this traction should be like Peter Parker — sticking to things you don’t even really want to. It’s comprised of multi-directional blades broken into nubs running from a center line right in the middle of the forefoot. The blades should push dirt away and out while gripping the floor, and they did a great job — as long as the floor has at least a little finish on it.

On the first court I played on, I was sliding everywhere, having to wipe about every second or third trip down the floor. Granted, the floor was dirty and sucked, but you encounter all kinds of courts in life. The second floor was in better condition, and the traction was way better. Yeah, wiping was still needed, as the traction is shallow and does pick up dust (could be the translucent — I haven’t had a chance to try the solid rubber yet), but when clean and the court is workable, you’re straight Gorilla Glue.

Outside courts: don’t do it. Just don’t. 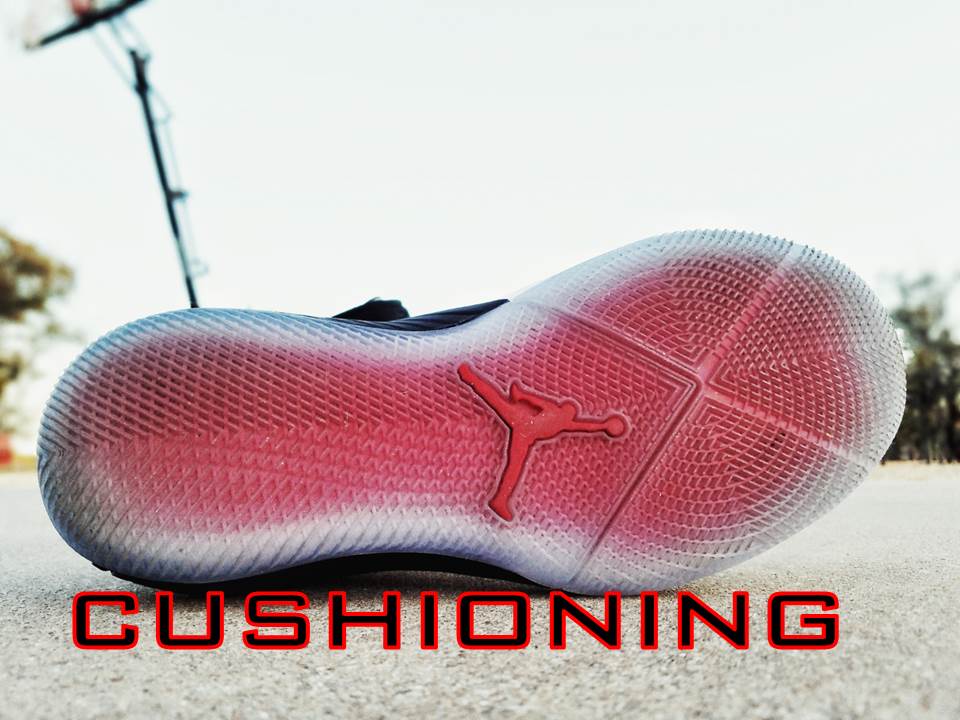 Technology-wise, the part of the Why Not Zer0.1 that has everyone’s eye is the cushioning. Full-length Zoom runs bottom-loaded and at 8mm thick it has bounce while still being low-riding. The Phylon surrounding the unit? That’s definitely going to need a little time to break that in.

The midsole felt very much like the Jordan 32, from the start and once broken in, but once it gets going and starts creasing you will get a responsive rocket ride that is low enough for quick guards and won’t hurt when you land. Zoom has been around for over 20 years, but when done right, there are very few cushioning systems that can compete with it in the basketball market. 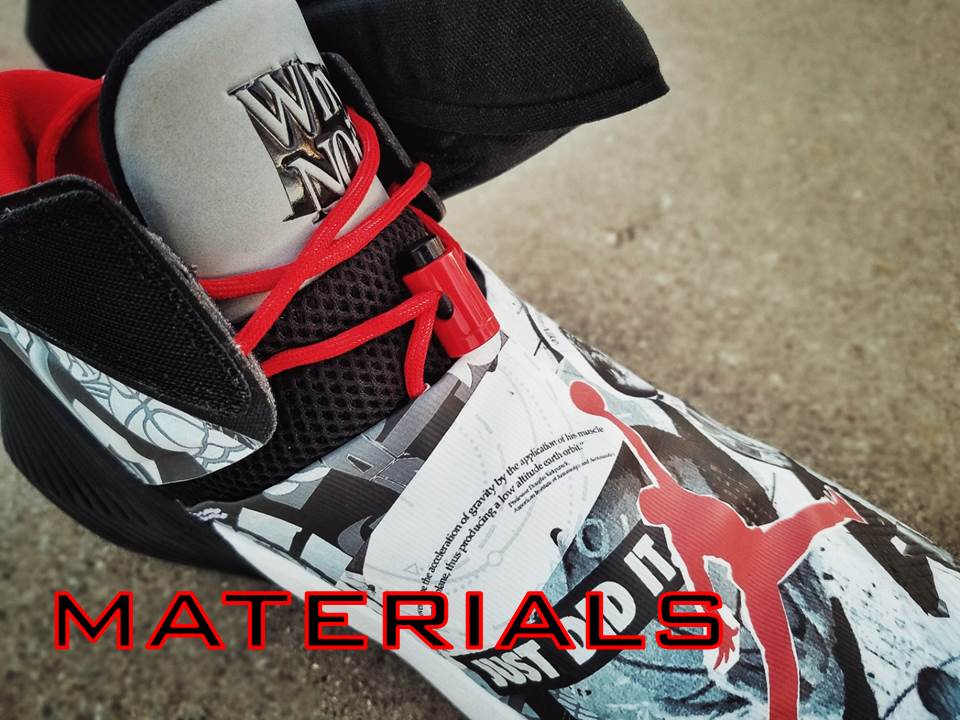 The materials used on the Why Not Zer0.1 aren’t exactly premium, as the upper is mesh and fuse, but the way the lines are cut and layered, it works. The inner bootie is open mesh and feels great on-foot — no hot spots or harsh rubs to cause blisters — even though the ventilation is terrible and the upper fits tightly all around your foot (usually, when you combine those two traits, blisters come next).

The lacing system uses the Flightweb system that is almost exactly the same as the Air Jordan 29 under the fuse cover. Speaking of the cover, you get a thin fuse that has no stretch at all over the foot. It’s great for containment, bad for sweaty feet, but those graphics…Jordan Brand could change the whole perception of this shoe with printed graphics on the cover.

The heel counter is stiff foam and never really broke in while wearing. It was good for support but bad for getting your foot in the shoe. On the plus side, the counter/heel is lined by some seriously thick padding that helps with lockdown and keeping that counter from rubbing your ankle until you bleed.

Lastly, the tongue is 3M and the “Why Not?” graphic should be on the outside (it needs to be seen). Overall, nothing new in the materials, but dang they work. 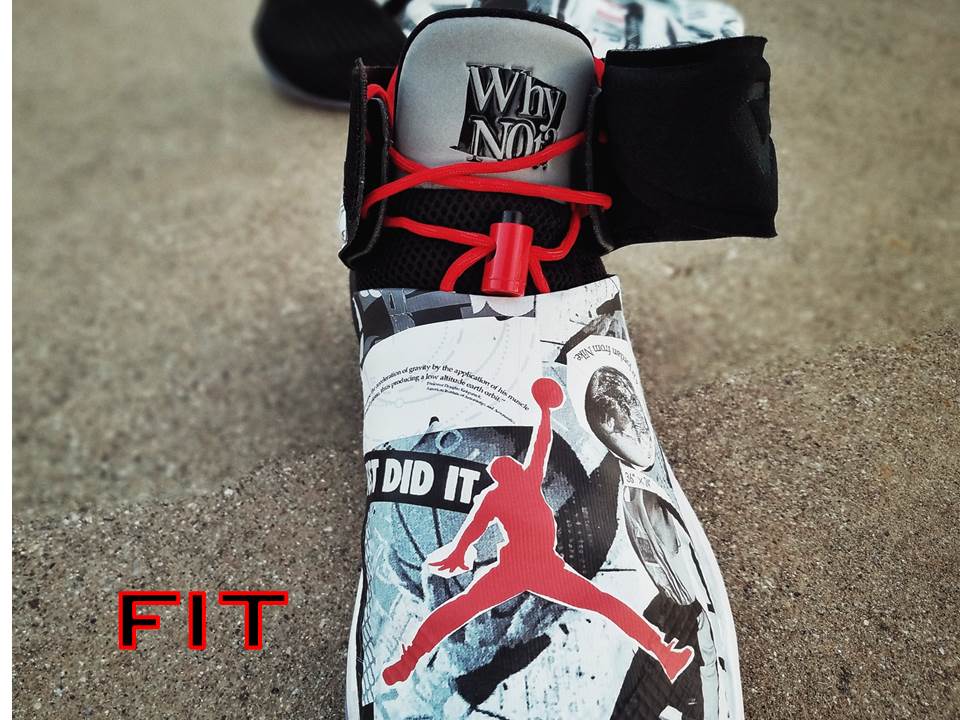 This is serious: the fit in the Why Not Zer0.1 is almost better than Hall of Fame. What could be better? Hall of Fame plus 1? Who knows, but once your foot is in the shoe, there is no movement at all. NONE.

The length is a little long, but not enough that it affects performance (and I like a little extra length). The width is perfect for normal to semi-wide feet (mine are slightly wide), and the heel counter completely locks your ankle and rear foot in place.

The laces are a quick-pull system using the Flightweb integration and completely pull the inside mesh onto the foot. The heel counter is lined with thick padding, as is the ankle area, and it is that old-school wrap-around-the-joint-and-lock-you-in feeling.

The strap, well, it looks good, but it isn’t really needed. The Why Not Zer0.1 has internal wings that pull inside and lock in, so the strap is just extra overlay to hide the construction. Same with the foot sleeve — the graphics look great and it hides the lacing, but like the original Zoom Flight “the Glove” and the Air Jordan 28, the cover is aesthetic.

Getting into the shoe presents problems until you figure out a method. That’s completely insane, to have a “method” to get a shoe on, but ever since the  KD 9 it has been more necessary than not. The stiff heel counter comes all the way to the top of the shoe and has little give. The cover has no stretch, meaning the tongue doesn’t pull out very far. Add these together, and your foot almost has to be greased to get in.

Luckily, after the first couple wears the foam in the ankle collar loosens slightly and your foot should go in way easier. If not, keep pulling and tugging — once in, the fit is like almost no other shoe out there. 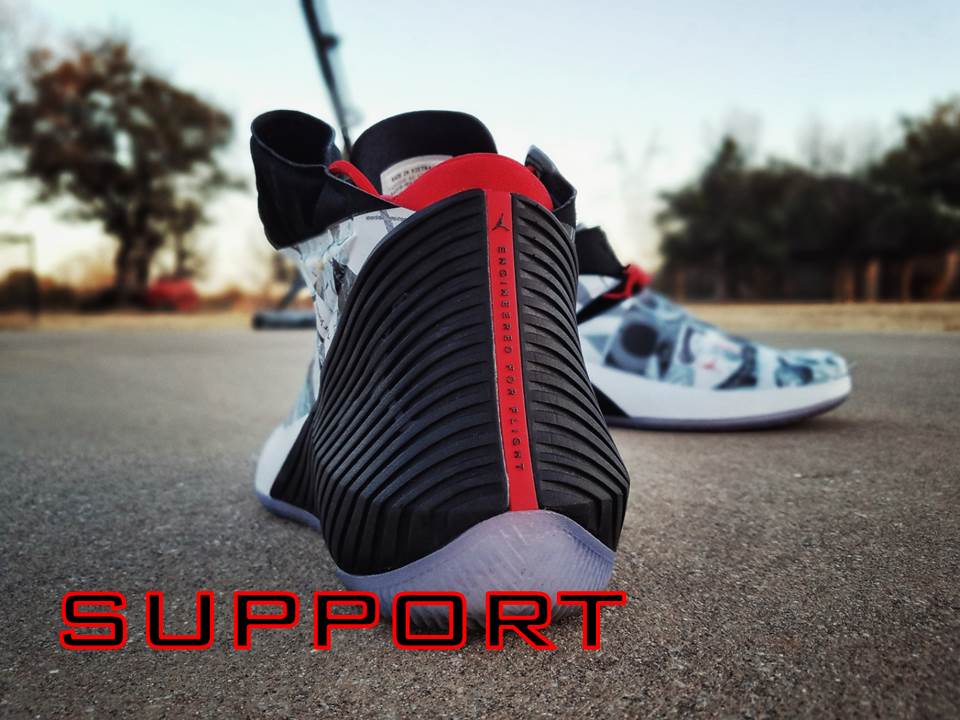 Like Fit, Support is an excellent category for the Why Not Zer0.1. That heel counter, again, is big, solid, and imposing — it’s actually kind of scary. The looks lead you to believe the shoe is stiff and rollerblade-y, but the counter cuts away from the ankle joint as it rises, leaving some room for linear (straight forward) motion as you run. The strap does lock in but it’s soft and flexible, and the cut-out under the ankle strap lets you bend and move easily.

The midfoot/forefoot is supported by the lacing and the cover — and you aren’t going off the footbed in either direction. The Phylon midsole rises up over the sides of your foot to hold you tight and as it approaches the sole it flares out dramatically to give the Zer0.1 one of the largest outriggers ever.

However, it isn’t clunky; the way the tooling is molded offers a natural feel (with the edge being rounded and not cut off sharply). You really don’t notice it until you look down and see how wide the shoe looks from the top.

There is no shank plate but the sheer amount of Phylon and Zoom keep you from bending the wrong way. Don’t be scared — no shank plates could be found in shoes until ~1995 anyway. As long as the shoe doesn’t bend in the toe-to-heel direction at a drastic angle, you should be okay.

All of this structure must mean the Why Not Zer0.1 feels clunky and slow on court, right? Not at all. The transition is smooth and clean with responsive direction changes and quick jump. The full-length Zoom gives the foot a consistent platform through your step and the low ride feels fast and light. 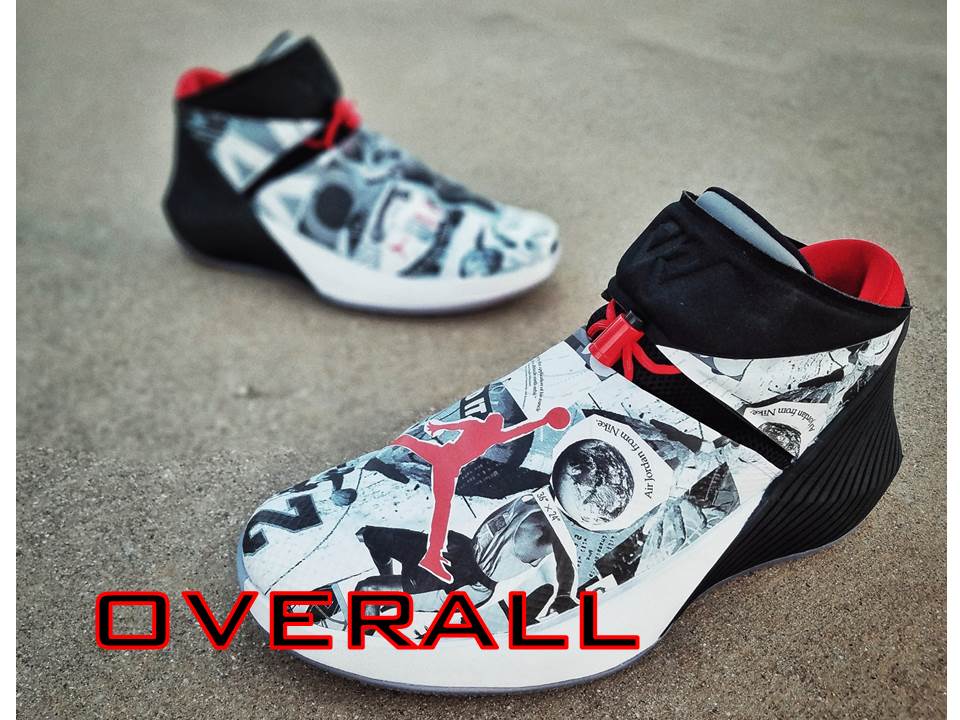 That was a lot of words, but when a shoe is this good, words are hard to stop — just like Brodie. Westbrook has had a reputation of having a hard time finding a shoe he loves, but the Why Not Zer0.1 should fit all of his needs.

If you are looking for great fit and support, great cushioning, and (almost) great traction, you have got to check this shoe out. This is what Jordan Brand was known for when it was building a name — performance and polarizing looks. Every year, the Jordan shoe was u-g-l-y, until Mike wore them. Then everyone loved them and a legend was born.

The Why Not Zer0.1 starts off looking completely different from the other shoes on the shelf, but let the performance speak and the shoe will be proven. From guards to big men, the shoe just works. It is a basketball players shoe, and it does everything on court that a shoe should do. Kind of like a certain #0 in OKC, huh? Now it makes sense. 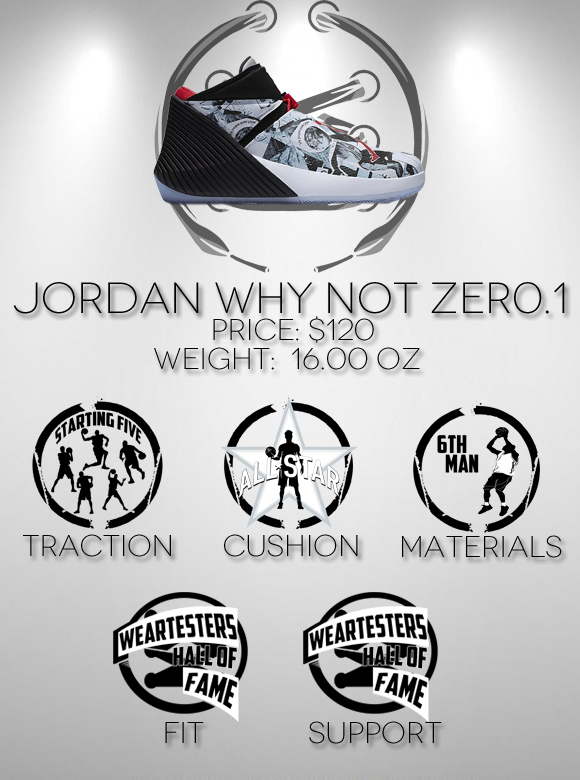