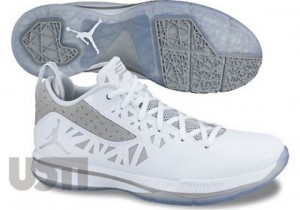 Hit the jump to read some of my first thoughts on the CP3.V.

I’ll start off with the traction as usual. The CP3 line has always had good traction; this time around they are featuring what looks to be a web like traction pattern. Typically I’d be opposed to this however, after the break in period with the Kobe VI & Jordan Fly Wade; these should be just fine in the traction department.

Cushion is where the CP3 line disappointed me. The past two models have used Podulon tech which I personally just don’t like. The CP3.V is said to use Podulon & Zoom Air so right off the bat I’m interested. Just from the looks I am assuming the heel is a Podulon pillar and the forefoot should house Zoom Air. I’m not 100% on this, but if true it should work out perfectly.

Upper and materials… this is where I just couldn’t pull the trigger on the previous CP3’s. All of the past CP3’s, in my opinion, have been pretty bulky for a Guard shoe. The CP3.IV was the better of the series as far as taking thing down to a lower cut and all that good stuff but the cheap leathers and overuse of patent leather made the shoe stiffer and hindered their flexibility more than I’m used to. I don’t mind needing a break in period but the CP3’s of the past were just too stiff for my liking.

The CP3.V looks to be more Fuse based and the silhouette reminds me a lot of the Kobe V. With that, we should see greater flexibility which should enhance the overall mobility of the wearer. Add the low cut aspect for greater range of motion in the ankle and it looks like CP3 will finally have a shoe worthy of on court performance.

I don’t know the price as of now but I’m assuming they’ll stay within the same $130 or so price range. Personally, I’m excited to see actual images so I can see the materials and build a bit better. Like I said before, this will probably be my first CP3 performance shoe so stay tuned for the drop date and I’ll be testing these out on court!