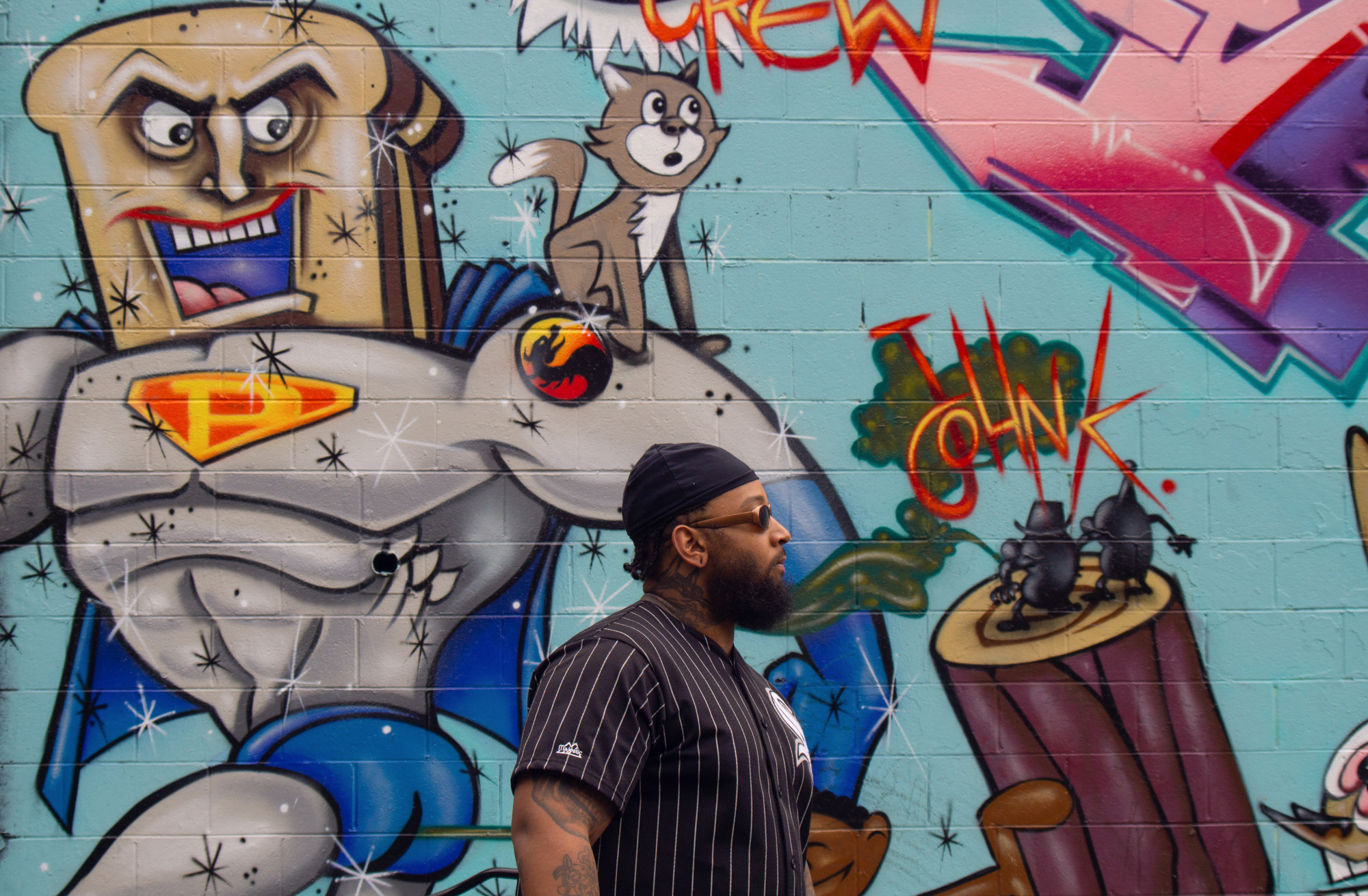 For the next segment of Reebok’s 3:AM series the company headed to Atlanta with local partners FRKO RICO and artistic collective LoveRenaissance. I sat down with Freako to talk about his art, his sneaker collab with Reebok, and working with rappers like Action Bronson and Gucci Mane. His shoe is available now exclusively at FootLocker.com for $100.

Your visual style is unlike most of what’s out there today, and could verge on what some artsy people call “amateur art.” To me, your style doesn’t seem amateur — it’s refined. How did you arrive at this graphic style?

That’s my natural hand. When I got into Howard University I had a full ride — are you familiar with the artist Charles White? He does a lot of black art, it’s realism, so I did a lot of hyper-realism to get into school. My natural style is a mix between the hyper-realism I learned at art schools and camps and the experimenting I did when I got to college. I broke out of it and started experimenting with a lot of abstract styles with new hand gestures.

I’m also a huge comic book fan so I started messing around with different kinds of pens — cause I paint also — but it’s really just my natural hand that I developed into a style, an aesthetic.

People are biting it using computers. I don’t use a tablet — my process is literally computer paper and ink, then I scan it. The way I draw you can’t hit backspace, can’t use a button — what it there is what is there.

I mean, I don’t think they’re biting — they’re using a whole different technique. I haven’t seen anyone do my technique, so I can’t say they’re biting. At the same time, I wasn’t the first person to do that technique; a lot of people that do comics, that’s how they get it colorized, they have to scan it in. I have a lot of different styles I work with — people be like, “He’s versatile, he experiments with his own hand a lot.”

Do you think that there’s a reason why your style is the style people want for their covers?

It’s nostalgic. It takes you back to cartoons, watching Thundarr the Barbarian and X-Men on Saturday mornings. I’m all about illustration, comic books, all that stuff. I work with rappers who honestly know art better than people perceive them — Bronson’s one of them, he knows art pretty well, he knows style.

He was also a graffiti writer.

And it’s fun working with him. I’ve done stuff for other people that just call shit dope but don’t understand that I have certain styles that I play in, different tips of the pen that I use — there’s so much that goes into it that isn’t on the computer, just me using paper, pen, and ink.

I think a lot of people want my style because their subconscious says, “I like this cause I liked cartoons growing up,” or “I like colors.” I do a lot of monochrome work now too, black and white stuff, and people who understand my art say, “This is strong, it doesn’t need color.” But I haven’t had a rapper hit me up wanting me to do a monochrome piece. 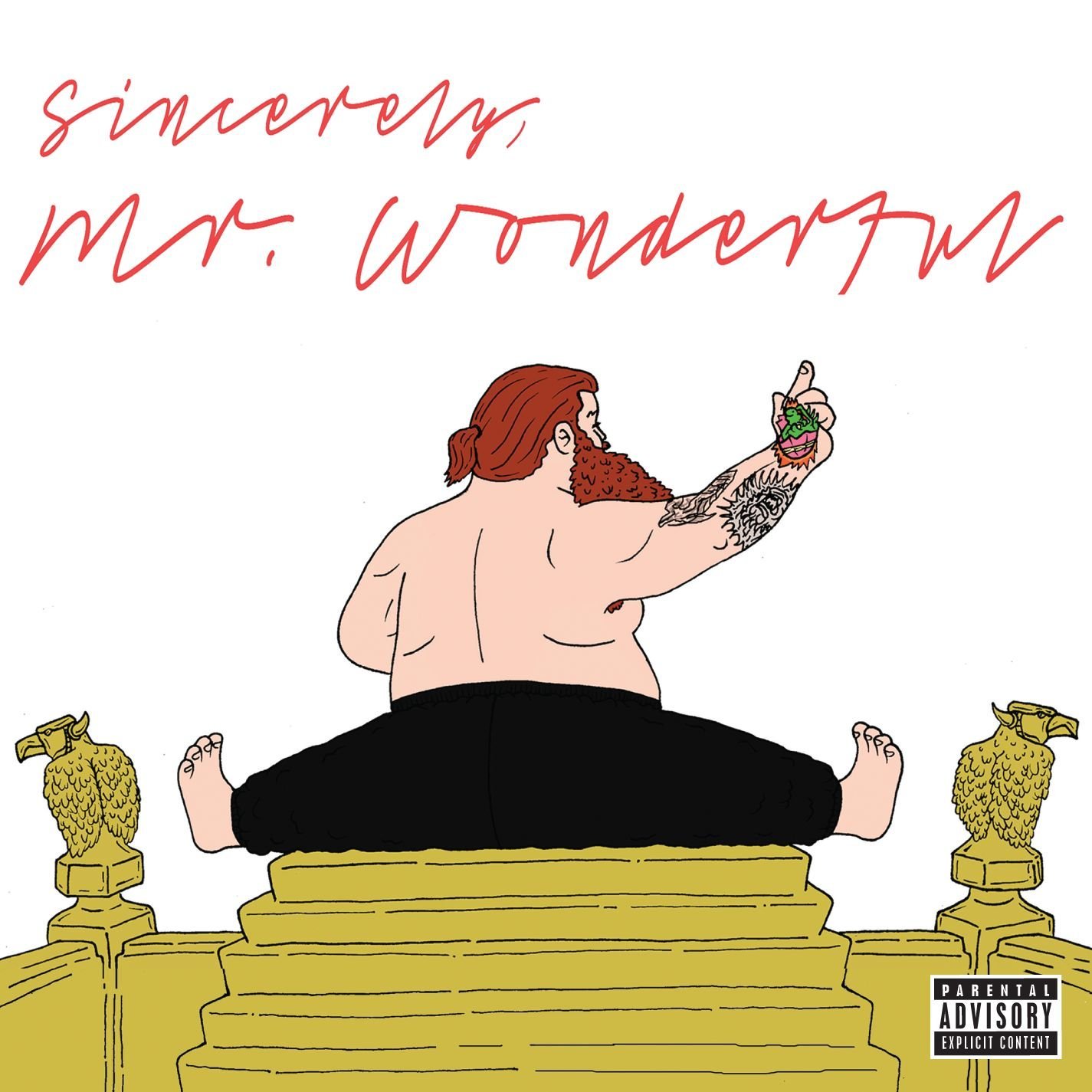 Because you brought up Action Bronson and Gucci Mane, did they have an idea of what they wanted for their covers, or you just brought them heat and they loved it?

Working with Action was fun because he calls me like “Hey I got this idea.” Like the “Baby Blue” cover, with Chance the Rapper — he was like, “Have you ever seen that old movie with Johnny Depp…Cry-Baby!” It’s an old pin-up movie, like greaser s***. He was like watch that movie, so I watched it, and he was like I wanna be like Johnny Depp — gimme the curl, the leather jacket, put me in a tree.

I was like I don’t want to put you in a tree, because I had been experimenting drawing rocks; I was doing a study on how Marvel draws their rocks — I just do a lot of referencing. I do a lot more work than people think I do, as far as studying s***.

With Gucci Mane, because he’s not that educated in art and he’s not that fun in art, he just likes what people come up with. He told me to come up with something, and trusted my hand because his people said I was the guy. But what I didn’t like working with Gucci was they needed the s*** so fast; Bronson will give me time.

The only thing I had to do fast for Bronson was the cover for “Terry” — my favorite one. I was working at this coffeehouse doing side work, cause my money wasn’t really there yet. So he calls me while I’m at work like, “Somebody leaked the song and we need this s*** in like three hours.” I was at work, but I quit my job and said “F*** it, I’m out.” I left my job right there, something like out of a movie. I had multiple jobs, I’m a hustler. 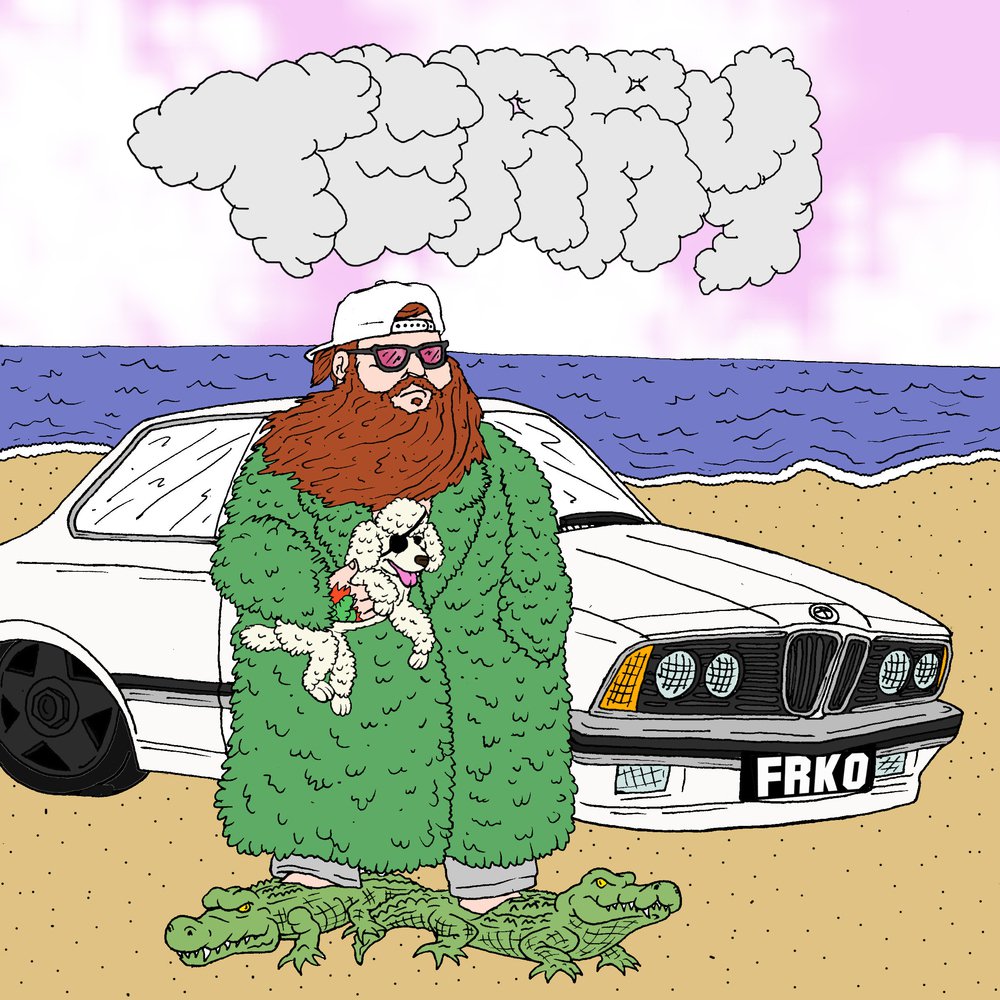 Gotta have multiple hustles, especially in 2018.

That was 2015. I been getting paid off artwork since 2015 now — I haven’t done anything but art. I don’t have to go to no interviews, I just do my thing. I’m blessed to see people f*** with it. Now, I’m getting opportunities like this Reebok thing.

Why did you want to do this collaboration with Reebok? The shoe looks great and the leather is awesome.

I’m not saying it because I’m doing it, I actually like Reebok — I wear Reeboks. Just the aesthetic of the company, especially the Classics — I grew up wearing them. I’m from Atlanta, and they were big here. They were bigger than Jordans at one point! You catch your Reeboks, get your Polo fit, get some Nautica, stepped out to Grant Park — that’s what we did back in the day.

On your collab, the FRKO RICO x Reebok Classic Leather, you wanted to accentuate the gum bottom. Why?

Because the gum bottom is already kind of the color of the Georgia red clay that’s infamous here. When I was growing up we had a lot of dirt roads in Atlanta, patches of dirt right next to some cement. If you went outside, it was impossible to keep your shoes clean in Georgia.

Also, the Reebok sole — I don’t know what it’s made out of — but it’s a magnet for dirt. So I said let’s go ahead and do something that pays tribute to the soil of where I’m from — where we’re from.

The leather is super buttery smooth.

I love the leather, but at first I didn’t want to do the leather. The first idea was mesh, but they were like we don’t have enough time to do anything else but leather. In the back of my mind I was like leather is the best. I wanted to do suede, like the Reebok Nylon — those are my favorite Reeboks.

I wanted to do embroidery on the leather, and they said we’ll try it, and it came out nice. I hate printed on vinyl s***. Embroidery is strong, and it ages well. When my son is 18 and able to wear these shoes, they’ll be intact — he’s only two months old now though.

Congratulations! Can you tell me about Roberto the Rat? He appears in nearly all of your artwork.

I had a rat that was visiting me in my cell, and I don’t eat pork, so I was feeding him my baloney (they only give you baloney sandwiches with this weird sauce melted into the white bread). I named him Roberto because he was hanging out with me and he ate the baloney. Rats — if you ain’t scared of them they not gonna bite you — you gotta feed them, bubt you don’t really wanna fall asleep next to one. But I did, and when I woke up, he was still there in the corner. I never seen a rat lay down — they’ll lay on their side — and he was a big ass rat [motions with his hands, about the size of a cat].

I was in solitary confinement, no windows, lights on the whole time, I ain’t know what day it was, so I started talking to him. I didn’t come up with him as a character in my universe until three years later. 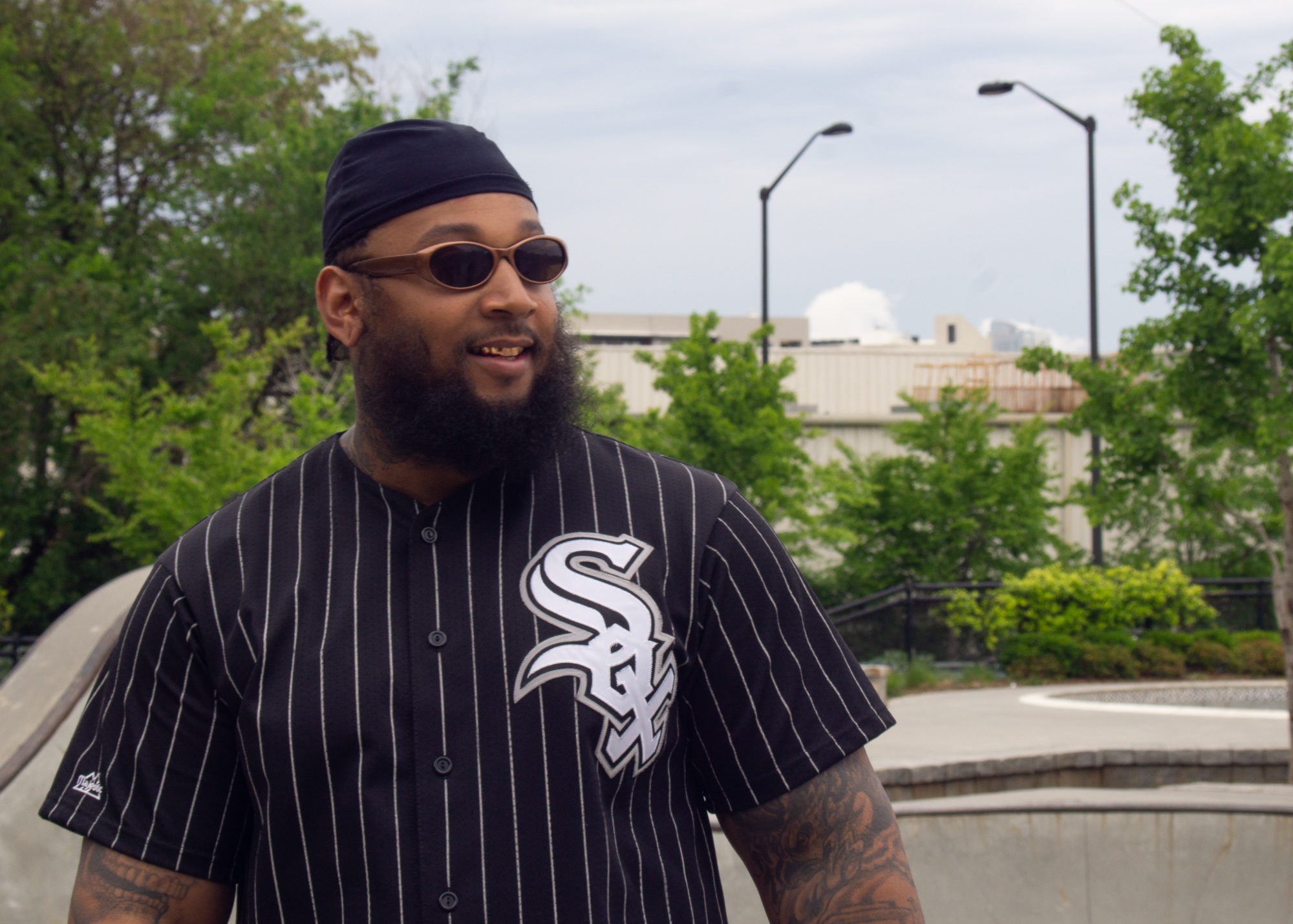 You’re building your own universe?

It’s expanding, I’ve got characters out the ass, it’s crazy. I was supposed to do a TV show, animated, it’s still in the works but it’s slow cause animators are kinda hard to work with sometimes. I’ve got a vast universe. Roberto transcends the whole universe, and the two roaches that hang out with him.

Finally, this project with Reebok is all about late-night creativity. What does 3:AM mean to you?

It’s when my brain and my creativity starts flowing. Man, I come up with the craziest stuff at 3 AM. Nobody’s calling me, my phone is off, everything is just working. Now, because I have my son, they’re asleep so I get to do my work. I don’t do my corporate work or rapper work at 3 AM. That’s my special time for me to create my universe, my comics and illustrations that I do for myself, and my little paintings.

Thank you for your time FRKO.