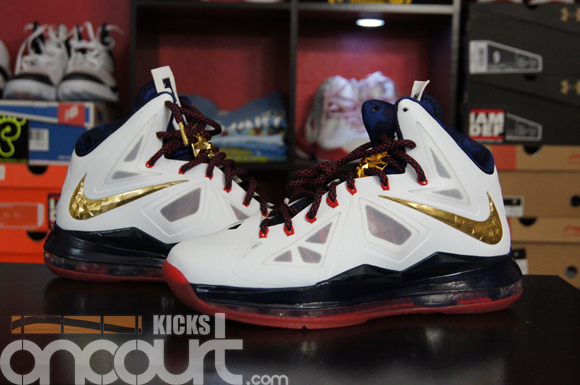 The LeBron X is packed with new Nike tech… let’s hope they crammed it all together to where each component compliments each other instead of takes away from the overall performance. 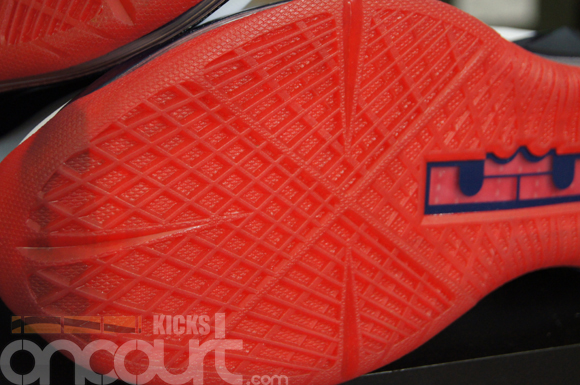 Traction – It’s translucent – which isn’t my favorite – but it feels like it will be just fine. There are tons of multidirectional lines from heel to toe so court coverage will not be a factor here. The rubber also feels thick enough and strong enough to endure outdoor action… something I may attempt after I’m done with them indoors. 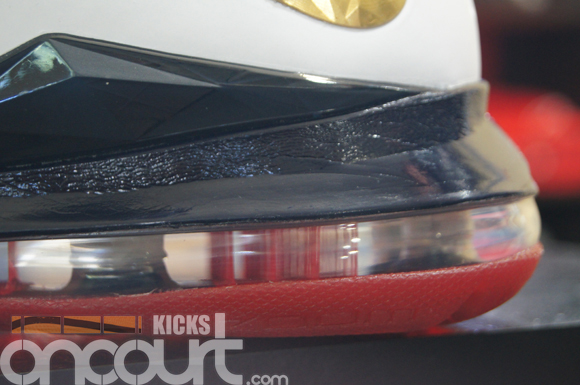 Cushion – This is the first time this cushion system has been used and I’ve been excited to try it out ever since I first heard about it. I’m not exactly sure what its official name is but I’m going to call it Max Zoom. 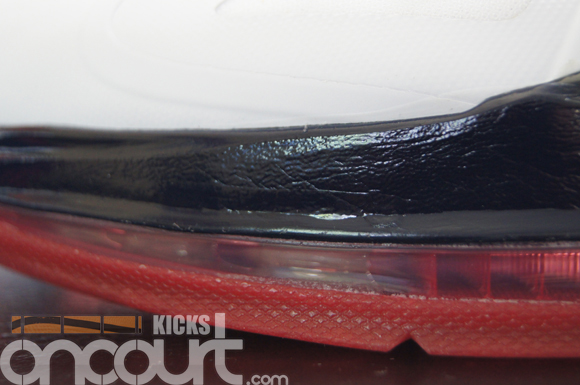 There are pillars in the heel and forefoot – typical Air Max construction – for structure and support that way you don’t sink into the large volume Zoom. It feels like your average Air Max 360 unit when you are just standing around but if you jump a little then you can feel the responsiveness from the Zoom fibers. It’s a pretty wicked setup so I’m really curious to see how they do on-court. 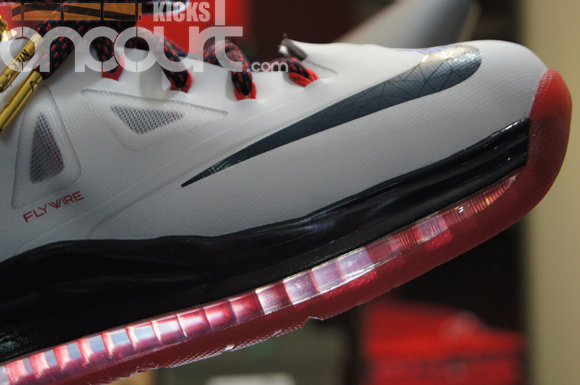 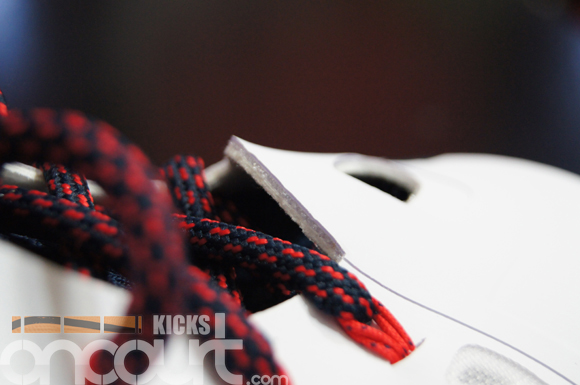 Material – Fuse is used throughout but it’s soft and thick. Not quite the rubbery type of Fuse that was used on the Hyperdunk 2012. 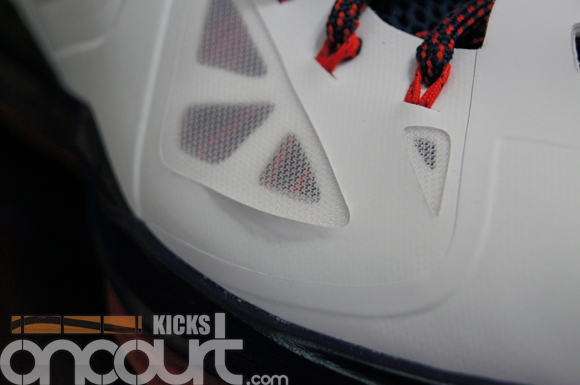 There is one section where the Fuse didn’t… well, fuse… to the mesh so we’ll see how long it’ll last on-court like this… This is the first time I’ve seen a flaw on Fuse material. 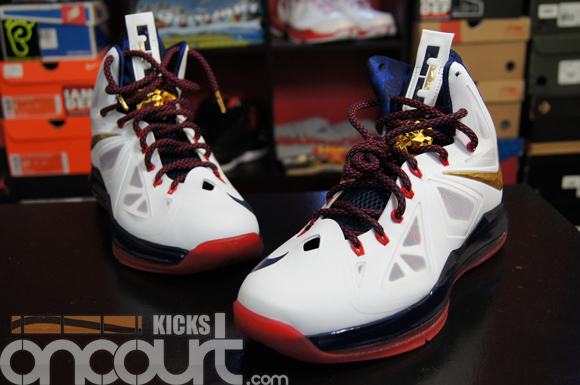 Fit – They run true to size but they are also pretty narrow… which is great for me and bad for those who have wider feet. The best way to know which size to order – for those who have to order online – is to go to your local Foot Locker and try on a pair of Hyperdunk 2012’s… whatever size you need in those will be the size you should order here. 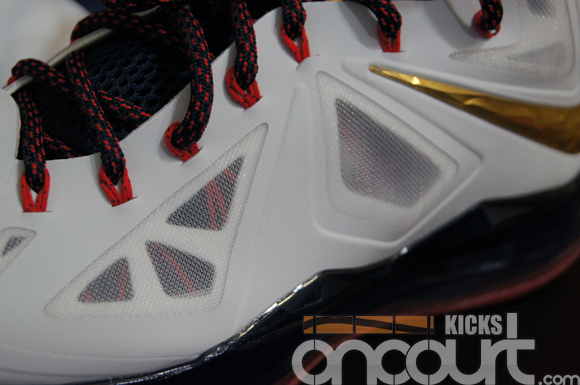 Ventilation – Air flow looks great. The mesh tongue is like the versions we’ve previously seen – LeBron 8 & 9 – but the Fuse is completely open which allows for a lot of heat to escape. They fit so snug that even if ventilation were to be an issue it shouldn’t mess with the fit or lockdown whatsoever. 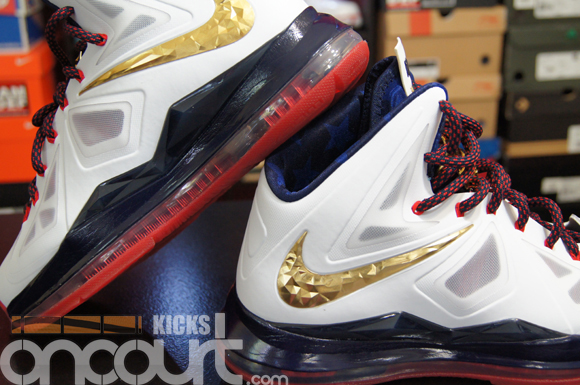 Support – The material, fit & Dynamic Flywire will bring you most of your support but there is also a TPU midfoot plate set in place just in case. When fully laced, these feel very secure and stable so support might not be an issue. 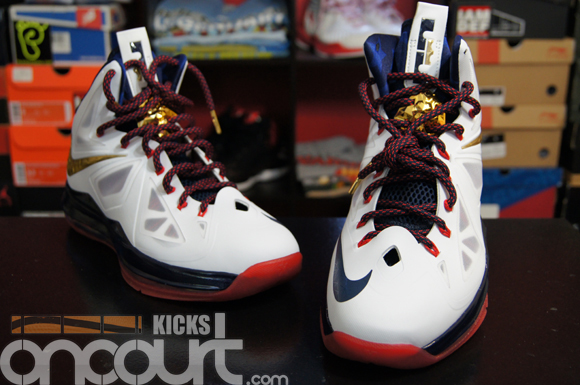 The LeBron 9 was a letdown and the more expensive LeBron 9 Elite was awesome… I think Nike got it right the first time with the LeBron X as they feel great on feet and don’t seem to have any major issues. My only unknown at this point is the cushion system… will it be amazing or a flop… I can’t wait to find out!