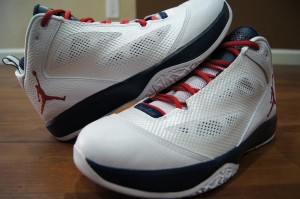 I finally got a pair of Jordan 2011 Q Flights! These were purchased at PYS.com if anyone is interested.

Hit the jump to read my first impression on the sneakers. 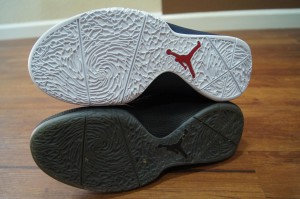 Traction- It’s the same exact traction pattern found on the Jordan 2011 and Fly Wade. I didn’t like the traction on the 2011’s too much, however, the Fly Wades were much better due to the type of rubber they used… the Fly Wade and AJ2011 use different rubber even though they’re both translucent outsoles.

One thing I am excited about is the fact that these use solid rubber soles… if my assumption is correct, these will suit the hardwood floors much better than the translucent outsoles. 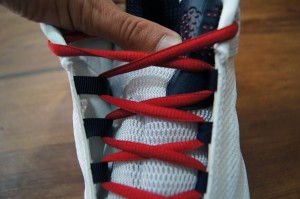 Fit- Lacing system and inner sleeve remain the same. Upon trying them on, they felt much better than the Jordan 2011. They hugged the foot from every angle of the shoe which is something they needed. 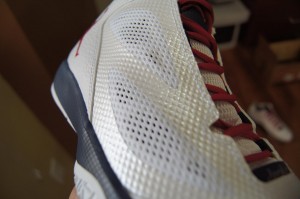 The upper is a combination of Fuse and genuine leather… yes, genuine leather! The best part is actually the Fuse material though. This is not your Nike Fuse tech; these have a Jordan Brand specific Fuse based that is much thinner and more flexible than traditional Fuse. Once the laces were tightened, the Fuse wrapped around your foot perfectly much like the Skinwire found on the Zoom Kobe V. 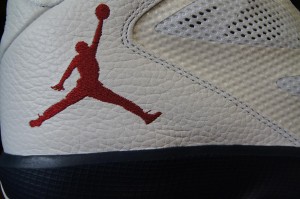 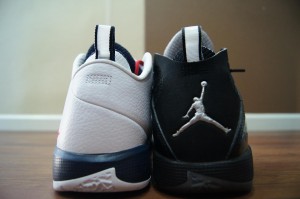 Here is a side by side comparison to the AJ2011. The midsole on the Q Flight are a little thicker and just as comfortable. I had said in my Jordan 2011 performance review that the shoe was basically a low cut sneaker in a mid cut shell. Same thing goes here, they made the collar asymmetrical similar to the AJXIII & XIV. 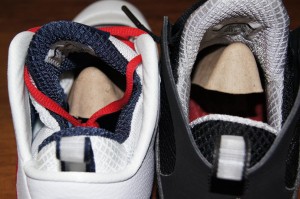 Inside the shoe is the same, as I said before. The collar is a bit different and they have added some additional padding around the leather portions. 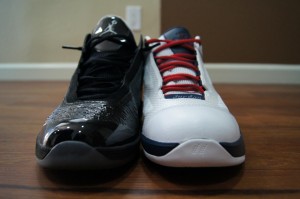 From this front view you can see the patent leather on the AJ2011 and where is warped while wearing it. They didn’t provide the wearer with enough stability, in my opinion, when the foot flexed which became a problem. The Fuse hasn’t had this problem from what I can tell from trying them on and moving around a bit. 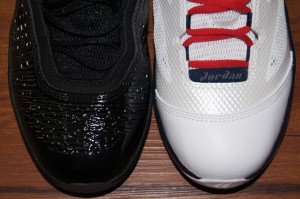 The toe is where the most needed change has occurred. There is a toe panel which is placed closer to the toe leaving the Fuse material between the gap. Since the Fuse is so flexible, this should prevent that bowed up action the original 2011’s had. Laced are also set back a little higher with a flex groove placed perfectly where the material bends with each foot strike/ transitional movement. Again, I’ve tried them on and moved around in them and have so far found all the issues I had with the Jordan 2011 fixed.

So with that, I will say right now that the Q Flight is a greater shoe than the original 2011. Can’t wait to play in them!