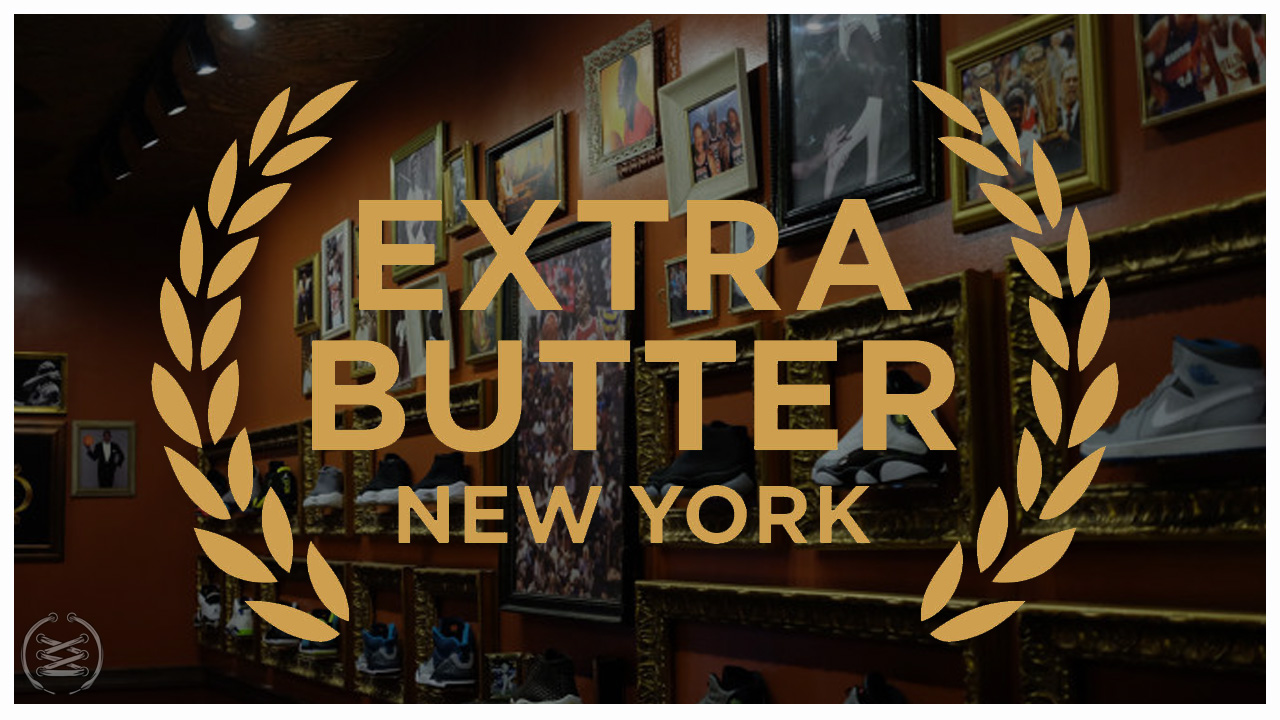 The sneaker and apparel industry is booming, and there’s no signs of slowing down in 2019. While the swoosh and three stripes brand continue to push new product each week, there can be a sense of over saturation in the market. Everything has become digital in this day and age of shopping. From the comfort of your home and mobile device in-hand, consumers have the option to browse the world’s retail shelves. What’s lost in this practice is the art of storytelling and creating personal connections in person.

One New York shop that continues to defy the odds and push the boundaries of the retail space is Extra Butter. Speaking with Art Director Bernie Gross, Wear Testers had the chance to learn about the brand’s history, the evolution of streetwear, their connection to cinema arts, and the store’s relationship with renowned designer Jeff Staple.

WearTesters: Extra Butter has a long history in New York. Take us back to the beginning and how the store(s) began.

Bernie Gross: Extra Butter started with a shared love of film, fashion and the culture. Co-founders Ankur and Nick Amin have been in business for 30+ years running a family footwear business out of Renarts in Long Island. Jason Faustino and I began working for them around 2004, and the premise of creating a concept boutique experience. Curated by Jay and my knowledge of the culture and led by the customer service that has driven Renarts soon came to be the foundation of Extra Butter. We opened our first location in Rockville Centre, Long Island in 2007, followed by our Lower East Side location in 2013. Since then we’ve continued focusing storytelling experiences with the best in class selection of product.

adidas Originals Nite Jogger – Releasing January 12th in-store and via EB Releases. Come by and check out the installation!

Were sneakers the first thing you wanted to feature when opening to the public?

Jay and I were already fully emerged in streetwear which is so sneaker driven, and our experience at Renarts is also so footwear driven so it was just a natural transition for Extra Butter to build its name as a purveyor of the hottest footwear.

How has streetwear changed over time and your thoughts on the cultural movement?

Streetwear started as graphic tees, hoodies and hats, whereas now it’s become a full-blown cut & sew private label business. While the sneaker presence has grown, the shift for the consumer has become more apparel driven is very apparent. I think the allure of streetwear to the select community back then was that it was this obscure under the radar bubble. If you knew, you knew. The point was that even within the community, you wanted to stand out and express yourself and your personal idiosyncrasies through the product you wore.

Technology has enabled the Internet and social media to grow streetwear into a globally and very commercially driven entity. The audience has grown, it has naturally become more inclusive which I think is great, that the world has seen its influence especially in the high fashion world. Social media has forced the matrix to measure hype based on the viral factor like any other content on the Internet. Concept, design, storytelling may not be enough if the internet as a whole doesn’t come to an agreement that something is hype enough. That’s why celebrity and influencer co-sign is so pertinent to the game now.

Films are a big theme with your brand. How did you navigate the art world into your storefronts?

From a creative perspective, I’ve always seen the parallels of footwear to film. An avid movie fan may love a certain genre, movie franchise, director, all for subjective reasons that may have been connected to a personal experience. Same with sneakers. You can absolutely love or hate an Air Force 1, there’s no right or wrong answer. But I guarantee, their response will be followed by some sort of memory or personal experience that justifies their opinion.

You and Jeff Staple have a solid friendship. When did that begin? What do you think about the Pigeon Dunk and the NikeSB lore over the years?

We first met Jeff when EB opened its second door in the Lower East Side, just a block away from his Reed Space shop. Jeff had always been a beacon of hope for young creatives like myself to want to chase dreams of making a career out of streetwear and sneakers. Reed Space was always one of the necessary stops among the circuit of legendary status shops within the LES, East Village, and SOHO areas when I’d go shopping on the weekends.

The Pigeon Dunk is just one of those undeniable sneakers in the pantheon of legendary kicks. The confluence of events made it the perfect storm to become grail status. It was progressively early before SB rose to fame. It was super limited, had a compelling NYC story, and of course there’s the fact that it caused chaos to make it mainstream news during a time no one cared about sneaker culture. The success the colorway has seen on other brand franchises I think it’s a testimony to just how timeless the concept is. It’s become Staple’s proprietary asset.

EB famously released the Jordan XI Space Jams back in 2009 during a midnight screening of the film. Whose idea was that? Have you seen other companies replicate the way you connect with the community?

Tying in movie screenings just made sense for our brand culture. You started to see a pattern in midnight screenings for highly anticipated blockbuster films, so I don’t think the idea was foreign to our audience that midnight is the keystone timing to launch product. Through particular movie selections, the community has been able to navigate and understand the personality behind the brand. I’ve always seen an opportunity to educate the younger crowd to films we feel are classic or just pertinent to movie culture. It’s always been about connecting at a personal level, outside of a product transaction.

Thank you to everyone who came to our launch today- the turnout was tremendous!

It seems collaborations between brands, artists, and athletes pop up more then ever. Is this a good trend? Where do you see this heading?

In influx of collabs speaks volumes to just how vast and fast growing this market has grown. I do think we may be at a pace that’s just not sustainable or even healthy for retail. I think we’ve become desensitized because of how much product is out in the world, and unless an exuberant amount of time, money, resources, and influential status is spent, then its not hitting people’s radar. You feed too much and the appetite only becomes greater.

We tend to say this often internally, but “Make GR’s great again.” A customer should be able to come in randomly, without the pretense of a calendar release date and just discover something dope and consider it a good find. The product should be appreciated simply for what it is without all the peripherals so that when collabs and special projects do come out, it actually feels special.

Tell us your thoughts on the old school FCFS method versus raffles and digital reservation systems? Will the bots ever lose?

When we first opened EB, I arrogantly felt FCFS was the way to vet out a true fan. If you want it, you’re willing to wait and ensure the elements. Over a decade has passed and now I feel FCFS only services the resellers who’s only agendas are to be readily available to line up at any given moment and wait as long as needed to get the end product. Lines can be cut, security can be compromised, the weather can be really bad and people can be confrontational and sometimes violent. Luckily we’ve never experienced anything that bad, but we prefer to reduce potential hazards. Reserve systems reduce these types of issues and streamlines the actual transaction process. It also enables us to service and connect with a global audience. On the flip side, without evidence of a local community, it’s difficult to justify being a destination and a local hub of culture. Brick and mortar business I feel is a privilege nowadays and when the scenario is appropriate we want to drive energy to the platform that made us who we are.

What does Extra Butter have in store for the Panda Pigeon Dunk release?