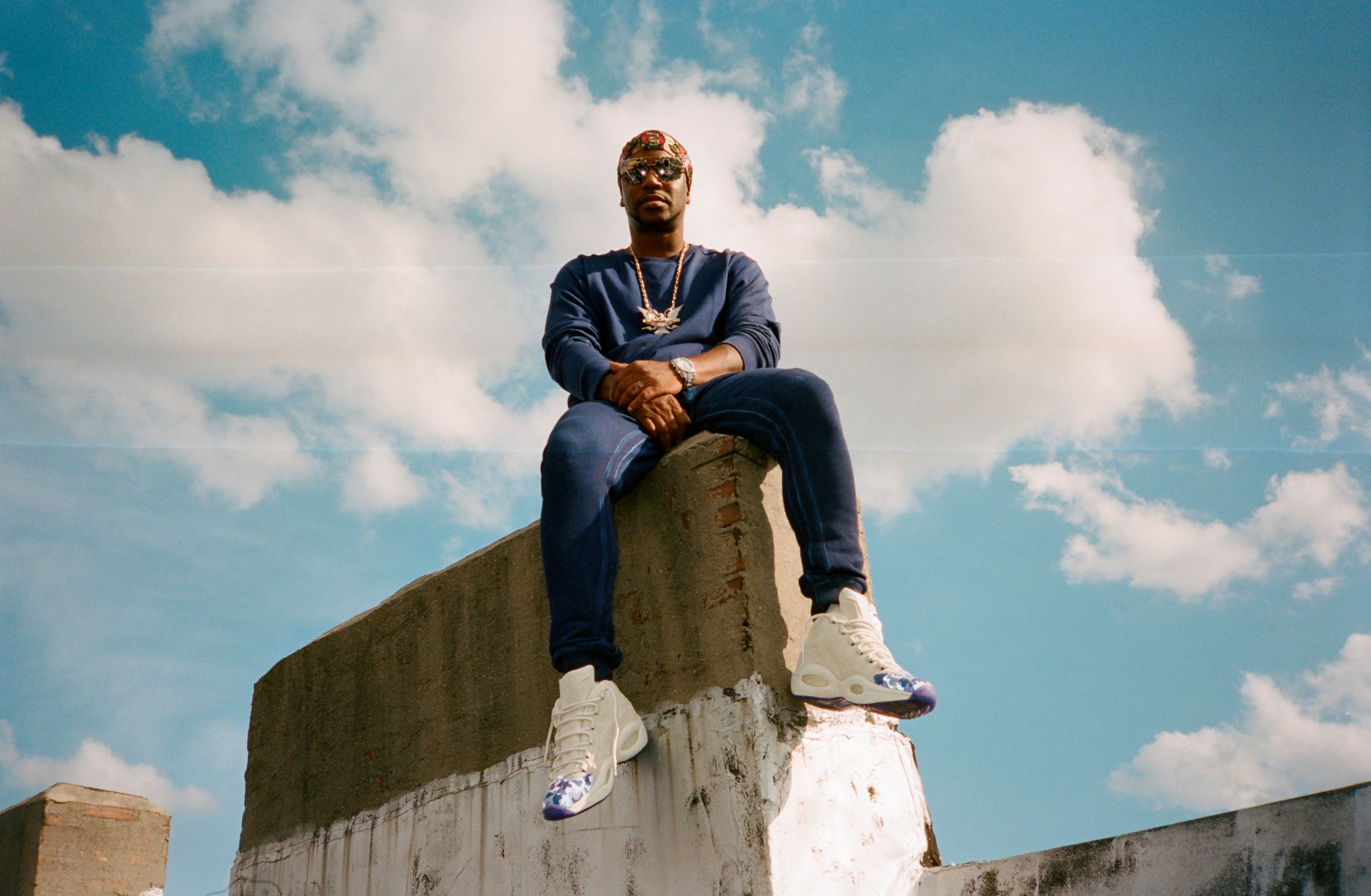 Chris Hill, Design Manager of Statement Footwear at Reebok, is cooking up some of the best special makeups in the footwear industry today. After a stunning collaboration on the Reebok Question for rapper Curren$y, Hill and Reebok are back with a sneaker for rapper Cam’ron.

Cam’ron, a long-time collaborator of Reebok, has brought his pink and purple Dipset vibes to the Reebok Question, Allen Iverson’s first signature sneaker. Inspired by the late-90s — early-2000s trend of airbrushing graffiti on clothing, this Cam’ron Question stands out with reflective details and premium materials.

The Cam’ron x Reebok Question Mid drops today exclusively at Jimmy Jazz in Harlem via an in-store event with Cam’ron. It will retail for $200 and drop on August 18 everywhere else, including Reebok.com (at 12:00 PM EDT). Expect the shoe to be very limited.

WearTesters spoke with Chris Hill to learn all about this luxurious Cam’ron Question design. Hill has a knack for putting great hidden details on his sneaker designs so he told us all about those too. 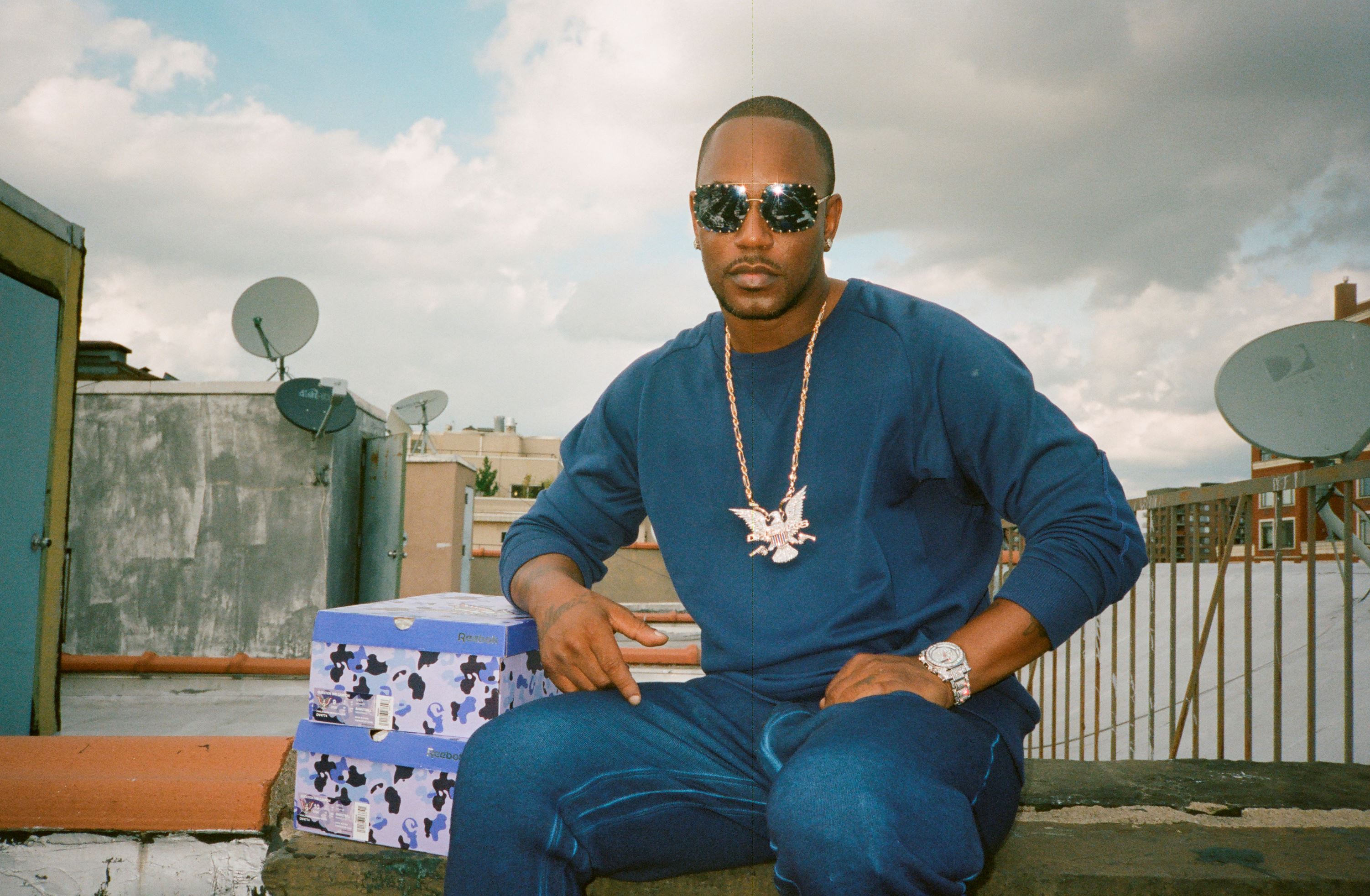 Chris, if I am correct this is your fourth sneaker project for Cam’ron. After the first three, what did you want this Reebok Question to do differently than the other collabs? It’s a new silhouette for Cam.

Being on a basketball silhouette already makes it quite different from the previous three shoes — plus Cam is very into basketball so it was fun to work on a model that has more of a connection to him. I wanted to keep it tied to the previous shoes so when they all sit together they look like a collection as well as evolutions of each other. This time, I pulled from the 2000’s airbrush cartoon character trend Cam was known for sporting.

The Reebok Question has a storied history — it’s a classic sneaker that can look great so many different ways. What informed the design of this Cam’ron Question? Did Killa want certain things for this collab?

Cam had some ideas but he has always appreciated what we’ve come up with. I wanted to bring in the airbrush trend of the ’00s, that seemed like an obvious next step in the line. We already did Purple Haze/420, Killa Pink/Camo, Harlem Nights/American Flag, so from a fan’s perspective (which I am), I was excited to explore the next trend Cam was at the forefront of.

Placing airbrush artwork on the exterior of the shoes didn’t feel wearable to me and could feel too much like a period or event in time which would make the shoes harder to wear on a regular basis. So, I kept the shoes cleaner on the outside and added the airbrush elements on the inside. I took the main points from each shoe — the color purple comes from the first release, Purple Haze, the reflective camo is from the second release, Killa Pink, and the hairy suede (originally pony hair, but it was way too expensive to manufacture) is from the ‘Harlem Nights Run’ DMX — and added them to this one.

We’ve spoken several times so I’ve learned that you’re a master of hidden details. Tell us, what could average observers miss if they just do a quick once-over on this shoe?

All the details are really hidden in plain sight on this one. The most “hidden” details would be what where the materials and colors came from. I wanted to create a more premium and lux feel, so I removed all the logos, the piping, and the heel molding. I used a box leather for the overlays and rolled the edges. I also infused Allen Iverson’s I3 logo with the Dipset Eagle, which is one of my favorite parts of this project.

As for the rest of the shoe, the Dipset eagle is debossed on the tongue, Harlem and Dipset are debossed on the webbings, there’s a chrome cell phone on the heel where the “3” usually is, reflective Cam camo (that has a hand full of hidden elements tied directly to Cam), and Byrd Gang is printed on the bottom on the ice outsole. Finally, airbrush style sockliners — if you’re a fan of Cam’s you’ll know what those were inspired by. 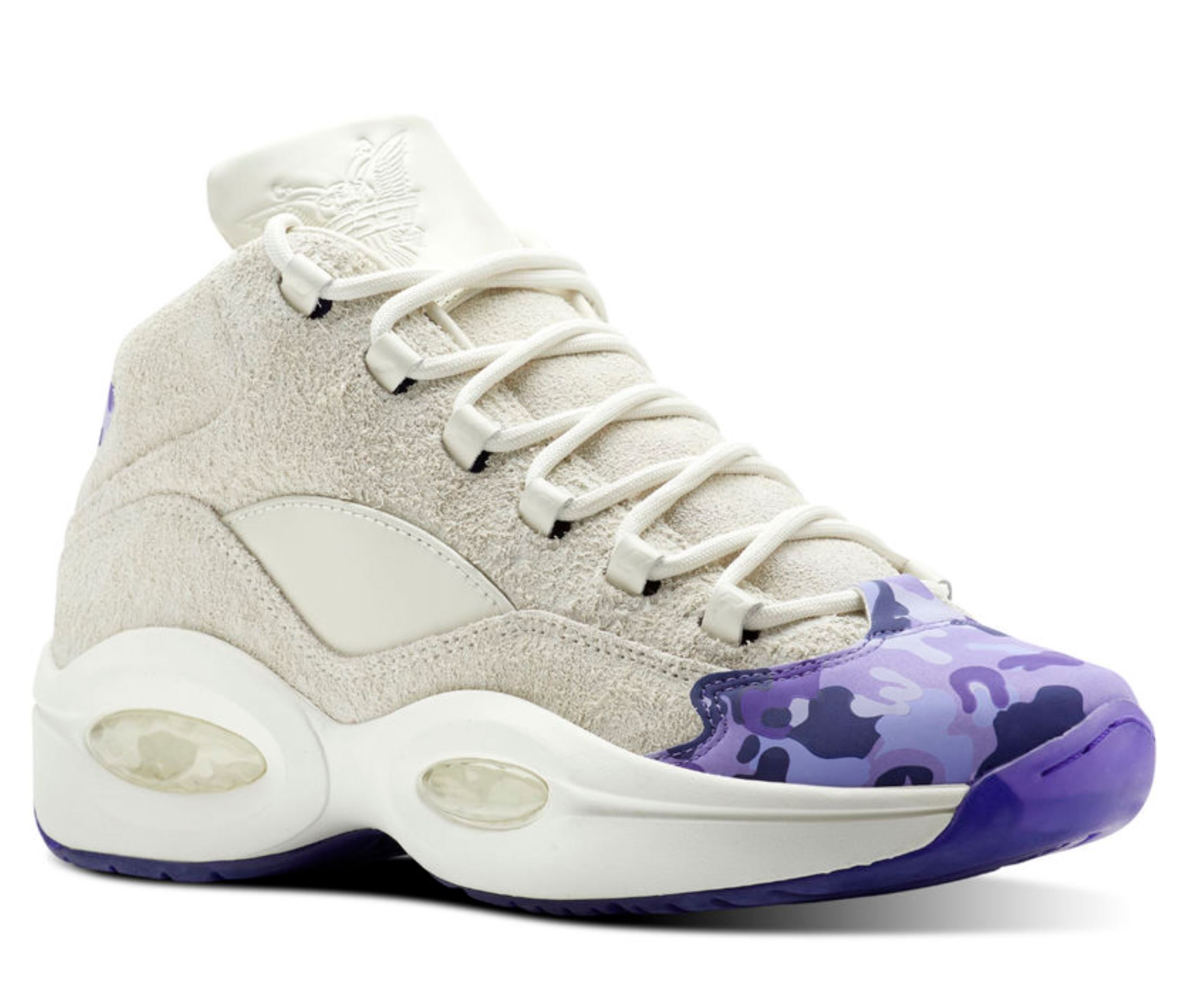 What would you like the people to know about this latest Cam’ron collab?

This is Cam’s favorite shoe of his line, and it’s mine as well. We are both fans of Iverson and the Question, so it was cool to see us align on this project and to validate how well I understand him and appreciate what he has done for hip-hop music as well as the culture.

Cam was the main influence on how I dressed in college — he made it “OK” for men to wear pink and purple — so getting to not only design one, but all of his collabs has been an honor and a dream come true. As a kid wearing oversized pink tall tees I never would have thought I’d actually be designing shoes for Cam’ron.

Should we expect another Cam’ron collab? So far, the shoes have only been heavy-hitters — and they’ve all sold out.

As of now this is his last for a while. We’ve done a lot with him and he has been a great partner; he is always excited and really pushes the brand so we don’t want to wear that out. I think there will always be some kind of connection with Cam based on our history together.

Thank you for your time Chris.

Let us know what you think about the Cam’ron x Reebok Question Mid in the comments below. Is this the best Killa Cam collab so far? 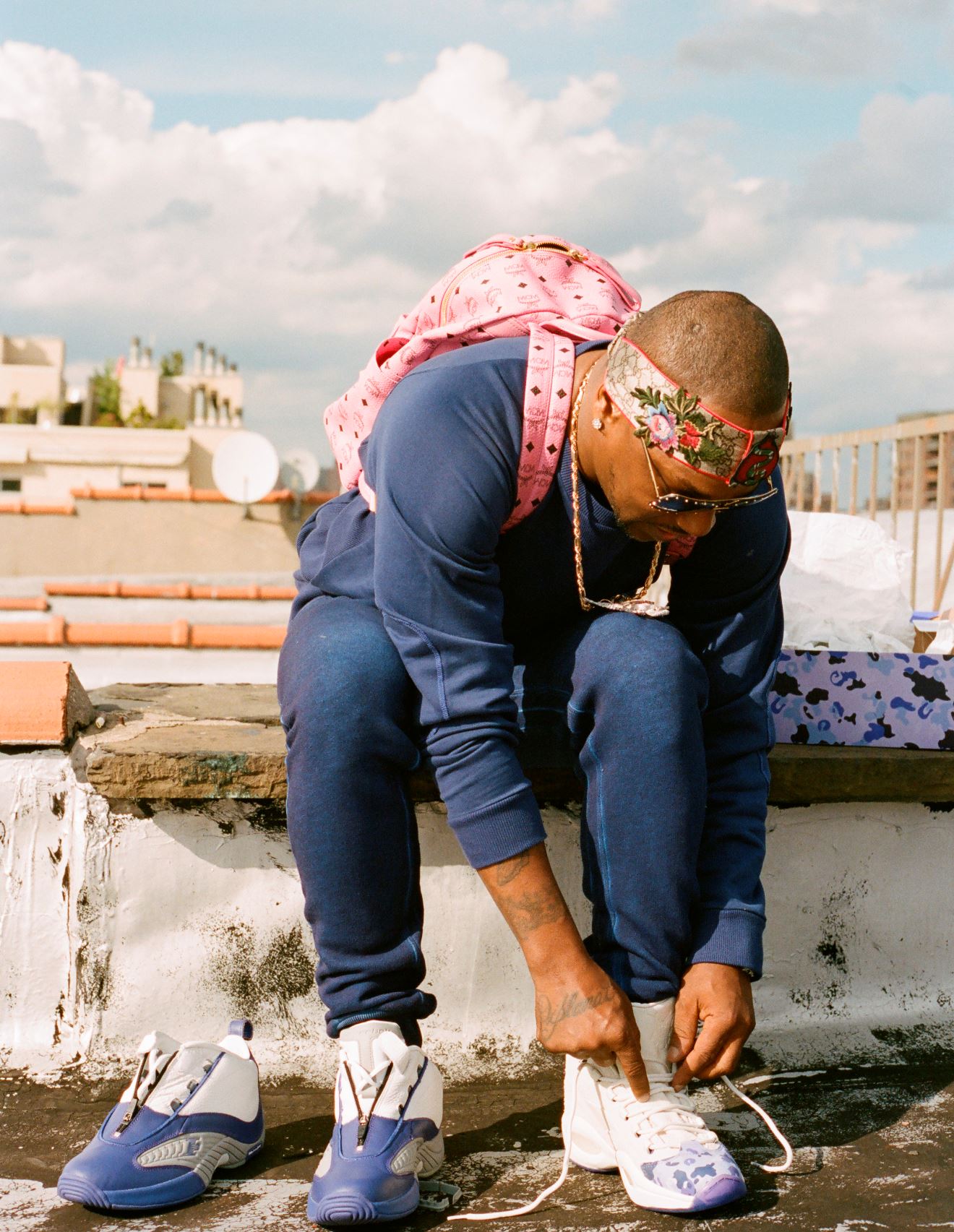 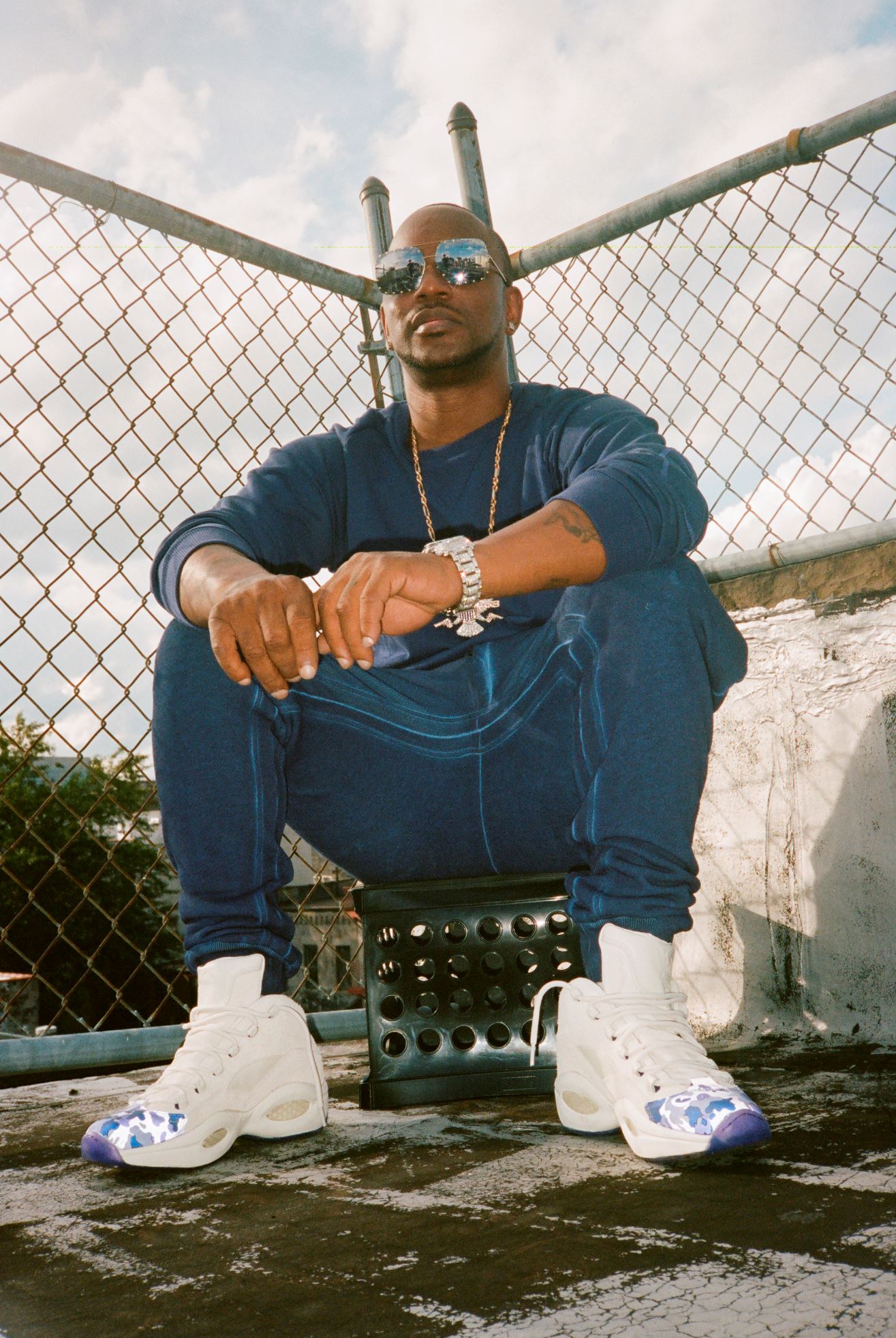