Duke4005 Weighs in on the Puma Uproar

Making the biggest splash in the basketball market we have seen in years, Puma re-entered in a huge way last summer. Puma brought us the Clyde Court Disrupt to begin the NBA season. Now, it’s time for model #2, and the Puma Uproar is no joke. Read on, true believers…

Herringbone lines. Makes sense, right? The Puma Uproar uses a herringbone pattern broken up into lines across the full length of the outsole, and this stuff WORKS!!! Initially there was a little slip and slide on a dusty 24 Hour Court, but it seemed like the rubber became better the more I played in them. By the end of the review, nothing slowed me down, except playing game five when I should have quit at game four. Dust was an issue at first but again, the more I wore them the more it seemed dust didn’t matter. I did have to wipe a few times (probably four or five during a normal, five game day of full court), but once clean, the glue was back. I was doubtful because of the spacing between the lines, but again, no complaints at all.

Outdoors? Well, honestly, I could see these working on outdoor courts for at least a couple of months. The traction pattern isn’t the deepest but the rubber is good and solid and with full coverage. Even if it begins wearing down in certain spots you will still have plenty of pattern so I say run it.

The one area that I can say I wish was better is the cushioning. Even so, it isn’t a failure by any means — I just wish the heel cushioning was in the forefoot. Starting in the heel, we see the Hybrid beads and foam that made the first appearance in the Rocket running shoe last year. It works, and I felt no impact at all when landing on my heels. Problem is, I don’t land in my heels often. I may turn off of my heel when coming off screens or curls for jumpers (actually, I know I do), but when planting to jump on layups or coming off rebounds, it’s all forefoot. If you haven’t tried Hybrid yet, don’t think because it resembles Boost that’s what it feels like. Hybrid isn’t as soft, more like Bounce foam, but it works and feels great. However…

There is no Hybrid in the forefoot. Instead, we get Ignite foam. Ignite is firmer, tighter and provides serious court feel and response, but very little impact protection. Personally, I have been enjoying shoes with a little more court feel lately (Curry line, Harden Vol. 3) and the Uproar fits right in. I didn’t get any extra pain in my joints after playing but I could feel the floor when I landed.

Following the ever-popular “different materials for different colorways”, the Uproar comes in mesh/synthetic in the ‘Charlotte’ colorway while this colorway, the ‘Palace Guard’, comes in mostly synthetic leather/leather. It is not the highest grade of leather at all but I am a sucker for raw materials and the Uproar fits the bill. The toebox is the synthetic and it still hasn’t shown any creases or wrinkles, which would seem to be stiff, but the material is thin so it isn’t too hard.

The side panels leading into the heel are tumbled leather and again, not the best cut but still thin enough to not take too much break-in time. The wrinkles show character, people!!!! The tongue and heel area is a thick, padded mesh that attaches about halfway down the throat – not really a sock upper but still a one-piece (call it a 1.5). The rubber around the heel isn’t the actual support piece but it does look cool. Overall, not a bad setup for lovers of old-school construction and materials.

Spot on. I went true to size with a 10.5, just like I did in the Lebron 16 Low and Jordan 33, and the length, width and heel were completely locked in. I normally lace my shoes extremely tight but on the Uproar, I didn’t need to, mainly because of the internal padding. The thickness and placement of the extra foam wraps the heel and ankle, meaning the fit in the rear was great with no heel slip and no side-to-side. This was even more remarkable with the large puck of Hybrid foam in the midsole. Normally, a large heel unit leads to a clunky feeling and a shoe that feels bottom heavy, but the Uproar holds tight.

The mid and forefoot also locked down with no movement at all. The lacing system is straightforward and works with the materials to pull up around the foot and stop any side-to-side movement. My true size gave me about a half-inch empty space in the length, which in my opinion is perfect, but going down a half-size would work if you don’t like any empty space.

The biggest component of the excellent stability and support is the wide, solid base. The midsole flares out and makes the base wider than the shoe, so coming off jumps and moving laterally are no issue – even if there is a slight instability or off landing, the base evens up and levels. There is a slight rise in the lateral forefoot from the midsole, helping to hold your foot over the footbed and the materials, again, don’t give much in either sideways direction, keeping your foot upright even if it should be sideways.

The lacing system is placed perfectly to lock the foot down into the midsole and the ankle back into the heel cup and along with the padded areas, your foot is not moving at all when laced at least slightly tight. The midfoot foam also contributes to the stability – it isn’t extremely soft under foot, giving you a solid base for landing with no roll from the edges.

The Puma Uproar is a fun shoe. Looks don’t matter in performance, but when a shoe looks good and plays good, we have a winner. The classic Puma side stripe, smooth lines and no unneeded straps or loops gives the shoe shelf appeal and looks like a basketball shoe when on. If you are needing a moderately cushioned (not too stiff, not too soft) sneaker with near-perfect lockdown and traction, look no further. The Uproar is a little heavier than some other shoes but the overall fit means there is no clunky feeling when playing. Any player at any position and playing style will enjoy the Uproar.

The best thing about this shoe? It is the second shoe from Puma Basketball in over 20 years and it improves, in my opinion, on the first, the Clyde Court Disrupt. In only a nine month period, Puma has released two shoes that perform in the top tier of the basketball market, and the brand only shows signs of getting stronger. For players looking for an alternative to the Nike/Jordan/adidas branding, Puma has the heritage and technology to compete, and their NBA lineup is no joke.

It is time for the big dogs to take notice of the big cat – Puma ain’t playing. 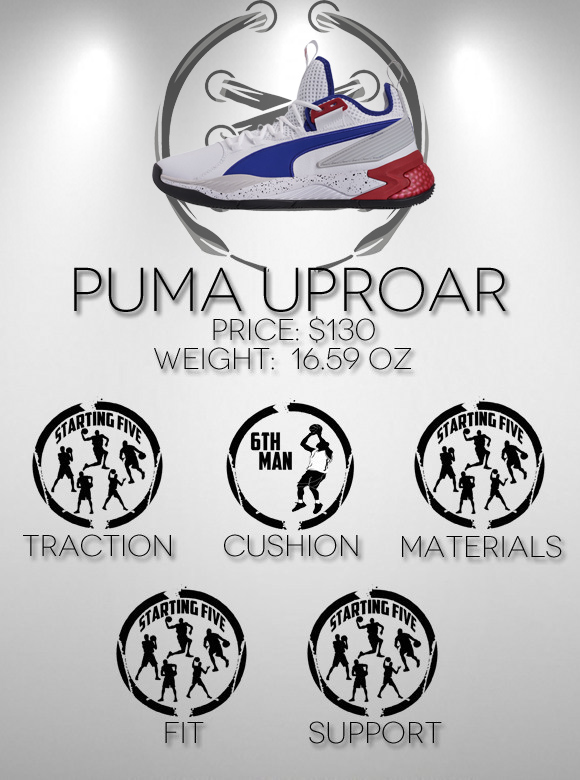