Under Armour has just reported its Q3 2016 financials. When Sports Authority filed for bankruptcy earlier this year Under Armour was hit hard — the stock price dipped, and the company revised its 2016 outlook. Now, Under Armour stock is tumbling after reporting a less-than-favorable long-term forecast. Shares are down as much as 15 percent to $32.25 in New York. 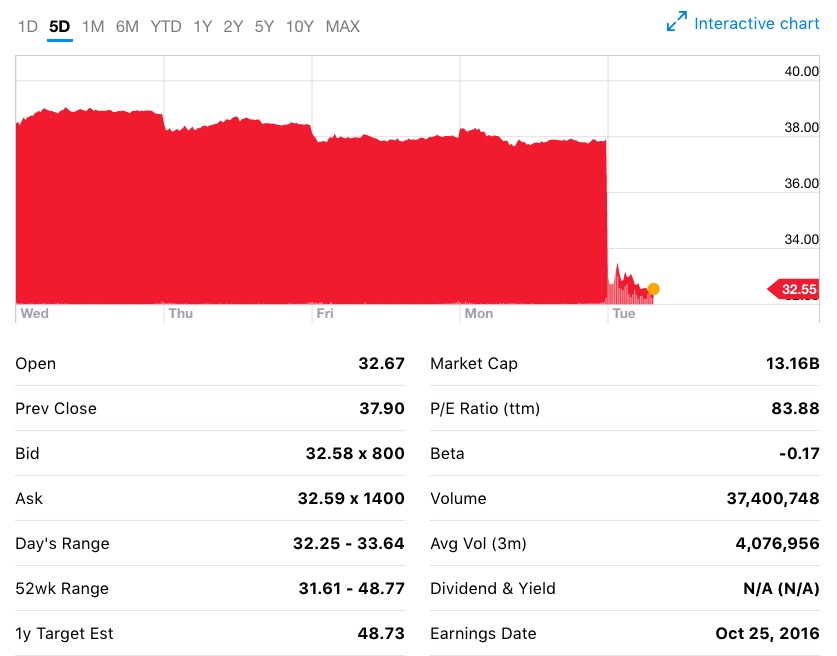 According to Bloomberg, Under Armour said Tuesday that it expects revenue to increase in the low 20 percent range during 2017 and 2018 — that’s the worst performance since 2009 (when the last U.S. recession ended). Moreover, CEO Kevin Plank is sacrificing margins in order to expand the breadth of Under Armour’s business by opening more stores, focusing on footwear, which doesn’t have the large margins apparel does, and going after overseas markets; on a conference call with investors Kevin Plank said that UA will be making a big push into China, where it is seen as the “professional brand” there. If you scroll down to the bottom of the financial statements you can see that as of September 30, 2016, Under Armour has more than doubled its number of international total doors (Factory Houses + Brand Houses) to 63 from just 26 last year.

“The growth is still there, and it requires significant investment,” Plank said on a call with investors. “It is time for us to invest.”

However, it isn’t all bad news for the sportswear giant. On the conference call with investors, webcast live this morning, Kevin Plank outlined much of the company’s status and said, “Athletic apparel is one of the strongest growing businesses in our lifetime.” According to Plank, by the end of the week there will be over 190 million registered users across all the UA connected fitness platforms (that’s a lot of valuable data). He also said, “Connected fitness will prove an important differentiator in short and long term.” Additionally, in July through September (back to school) UA’s overall footwear market share doubled. Yet, Under Armour is focused on getting shoes on feet and Plank hinted that footwear could be as big or bigger than apparel one day.

So, what do you think of the latest financial news about the Baltimore-based company? Will you be investing in Under Armour or adidas (which also took a small dip today, -2.5%)? Share your thoughts in the comments below.

Here’s the Under Armour report:

Kevin Plank, Chairman and CEO of Under Armour, Inc., stated, “Under Armour is a growth company and our ambitions for the Brand have never been higher. This marks our 26th consecutive quarter of 20+% revenue growth demonstrating the strength of the Under Armour Brand. From the Olympic Games in Rio to the launch of Under Armour Sportswear at New York Fashion Week, the Under Armour Brand continues to extend its reach to new consumers while remaining authentic and rooted in sport.  In the third quarter, our key strategies and investments to diversify our portfolio on a global scale were evident across categories, channels, and geographies. In running, we experienced strong global demand for our Slingride and Bandit 2 footwear styles, showcasing the continued expansion of our premium $100+ footwear offerings.  Within direct-to-consumer we launched three new e-commerce sites, bringing our total to 30 global sites, as we focus on expanding brand experience and premium offerings for consumers wherever they shop. And finally, we hosted our second tour through Asia with Stephen Curry, where the Brand continues to resonate and drive incredible momentum in new markets.”

Gross margin for the third quarter of 2016 was 47.5% compared with 48.8% in the prior year’s period, primarily reflecting negative impacts from the timing of liquidation, increased promotions, and foreign exchange rates, partially offset by continued product cost margin improvements. Selling, general and administrative expenses grew 20% to $499 million compared with $416 million in the prior year’s period primarily driven by investments in Direct-to-Consumer and overall headcount to support the Company’s strategic initiatives.

The Company will provide an update on its longer-term guidance on the third quarter earnings conference call.

Mr. Plank concluded, “Over the past twenty years we have established ourselves as a premium global brand with a track record of strong financial results. Looking back over the past nine months, it has never been more evident that we are at a pivotal moment in time, where the investments we are making today will fuel our growth and drive our industry leadership position for years to come. As a growth company with an expanding global footprint and businesses like footwear and women’s each approaching a billion dollars this year, we have never been more focused on the long-term success of our Brand.” 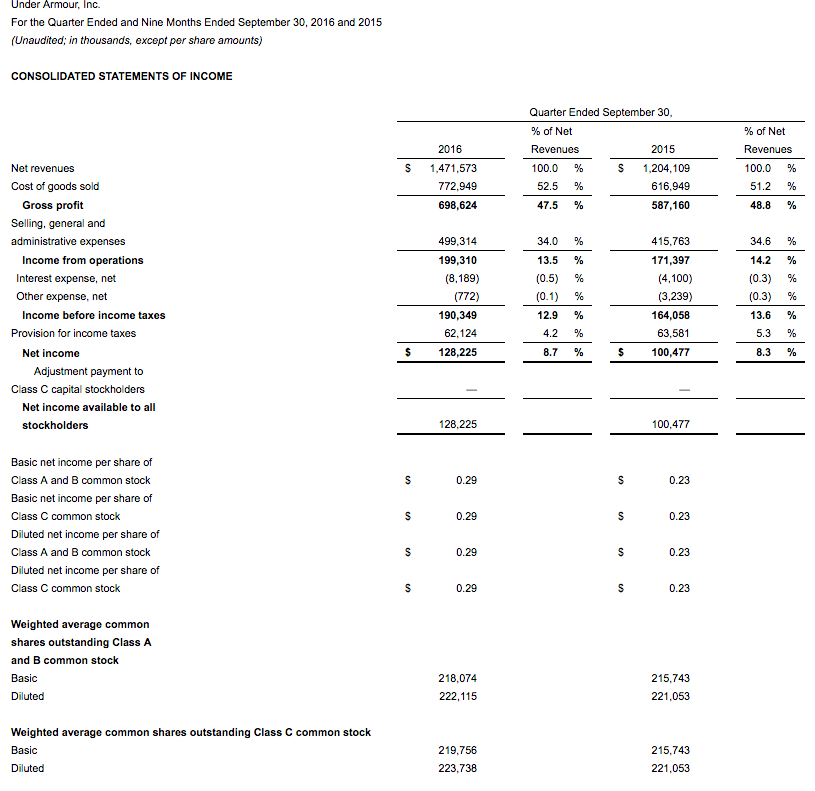 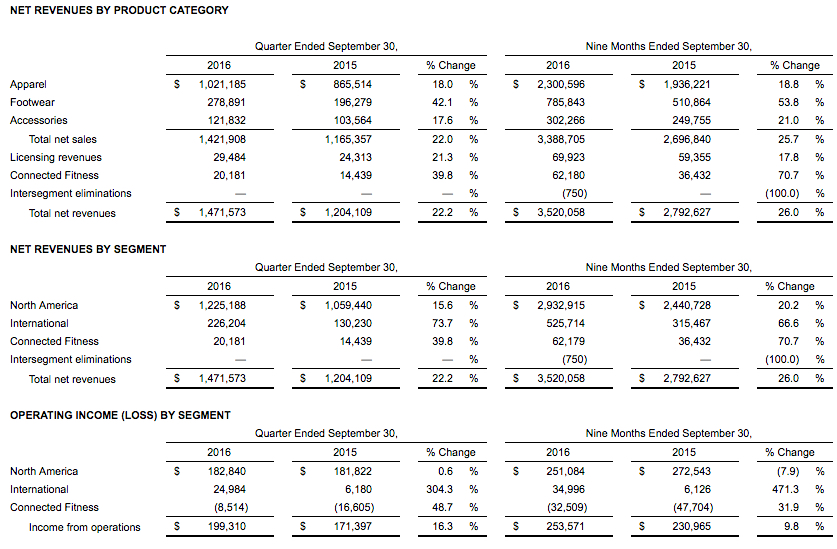 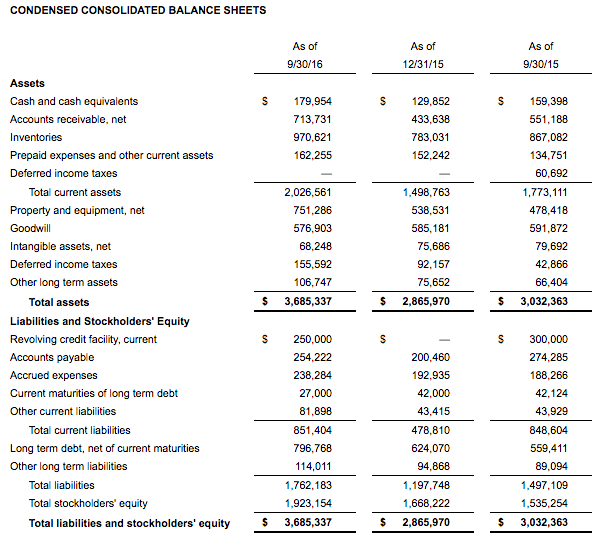 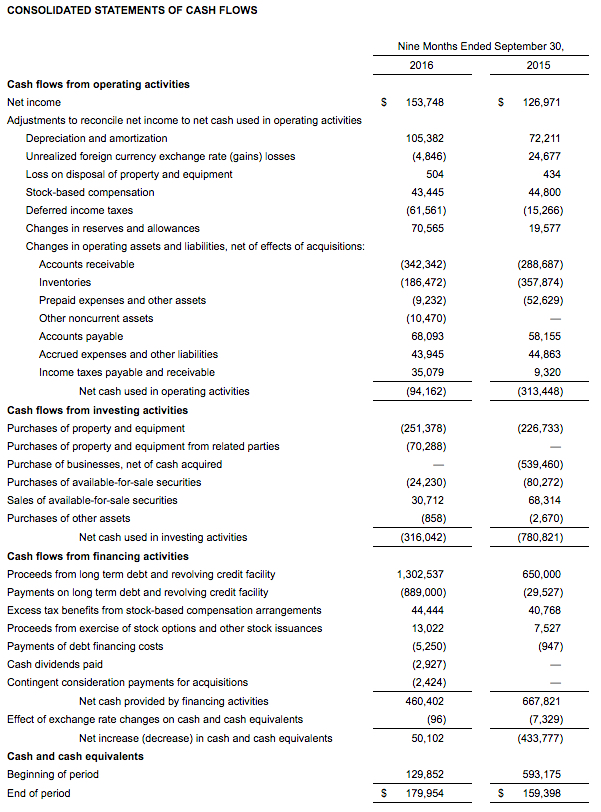 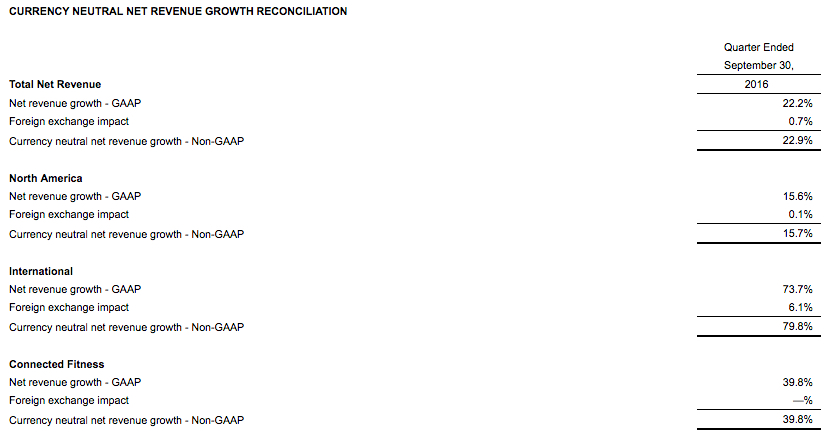