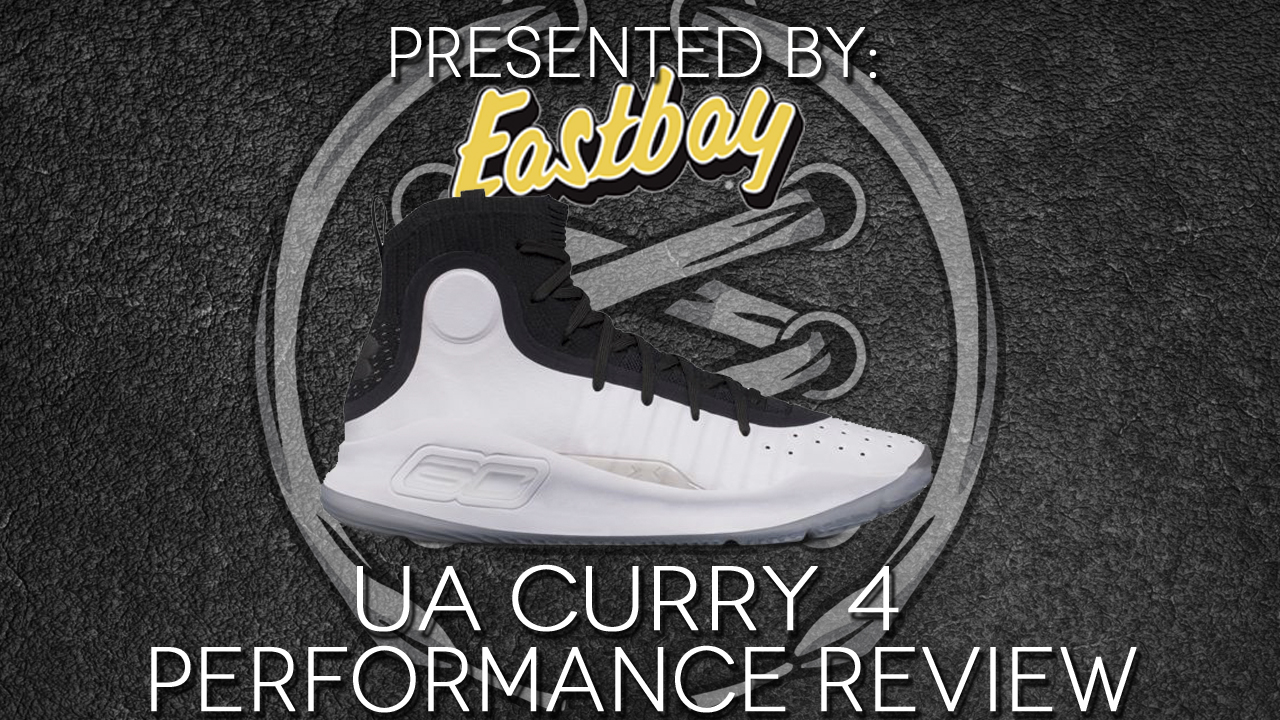 What? A signature shoe designed to the exact specifications of the player it was designed for? Welcome to the Under Armour Curry 4.

You can find the UA Curry 4 available at Eastbay.com starting October 27. 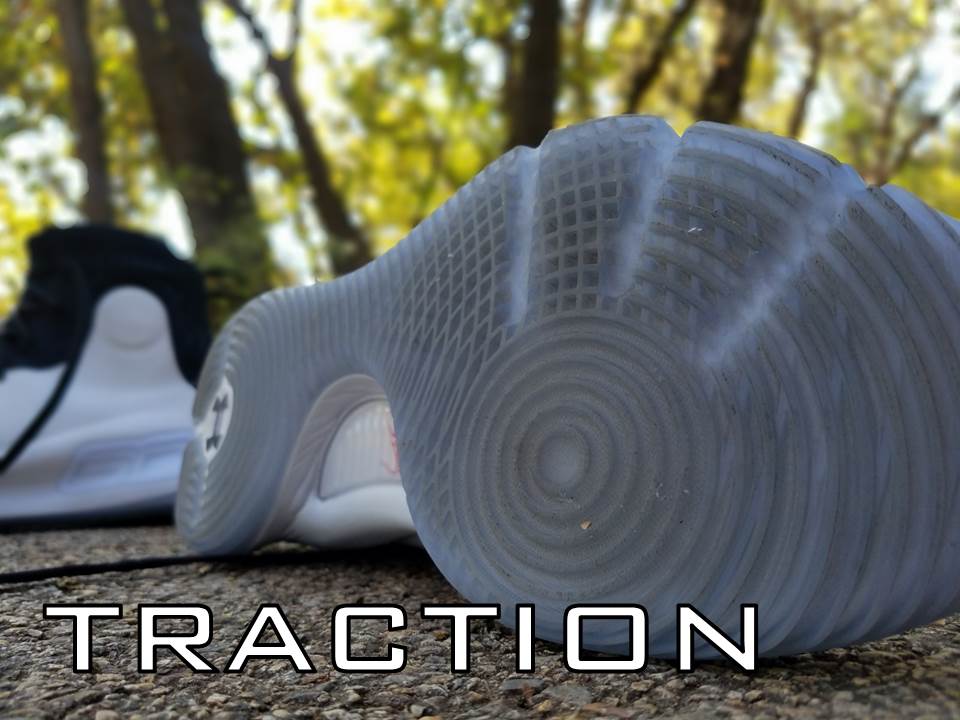 No herringbone, no problem — especially on clean courts. The pivot point was a staple of “old-school” traction and in theory allowed players to change direction and cut easier. That theory came back in the Curry 4, as quick switches and changes were easy and smooth.

The herringbone on the first three models was a biting, court-grabbing pattern, which is great for torqued-out changes, but a player like Curry makes slower, more efficient changes, and the circular pattern plays into that style. There wasn’t much squeak, but there wasn’t much slip either, which is perfect for guards, small forwards, and ninjas. Wiping was absolutely necessary on semi-dusty and completely nasty courts, as the translucent rubber grabbed every piece of trash on the floor. After a quick rub down you are good to go. 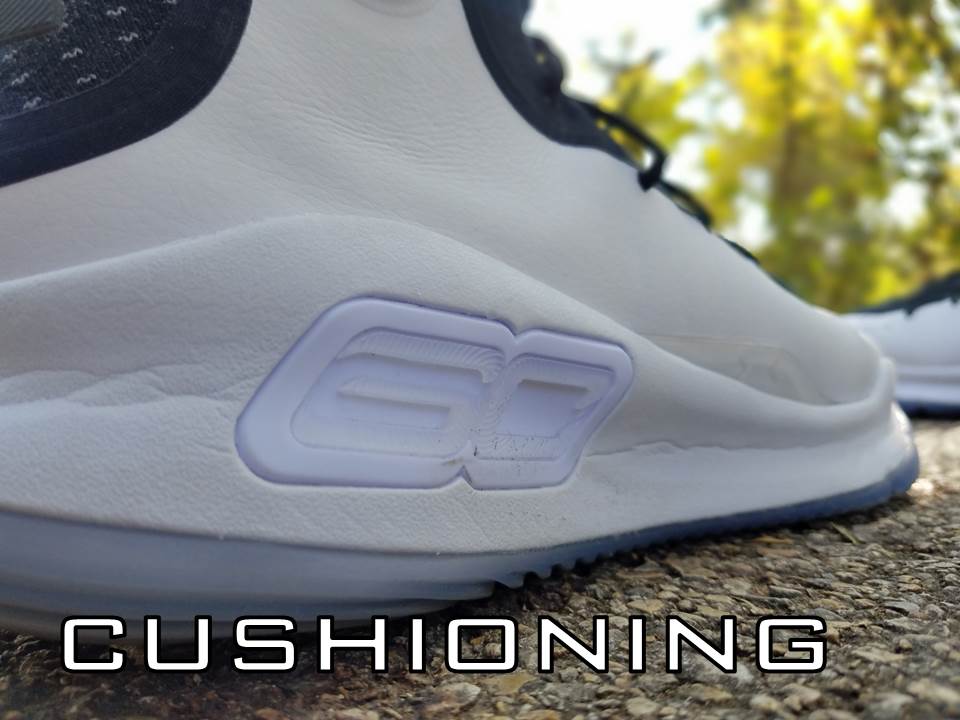 Believe it or not, some companies make signature shoes for the signature athlete. One of these shoes is the Curry 4. After talking with an Under Armour designer two years ago, right before the Curry 2 released, it was revealed that Steph wants nothing between his feet and the outsole — he wanted to ride as low as possible for reaction and court feel.

Makes sense, with his handles and, let’s say, lack of vertical game, that he would want to be able to jab-step, crossover, and move as quickly as possible. Charged was that technology for him. Now, we get a new foam, with no name yet, that is stiff, responsive, and quick. There is almost no compression in the midsole, which means your next step has absolutely no lag time — your foot hits the floor and is immediately into the next move. The Curry 4 just feels…fast.

But, and it is a big one, the stiff, responsive foam means there is almost no impact protection. Like, none. If you don’t jump with proper mechanics — lifting off your toes, landing on your toes, letting your knees and legs bend into each to absorb some of the impact — you will feel some impact up your legs and back. If you aren’t a high flyer, dunking and rebounding, you should be okay. If you are, just remember to either jump right or be light.

Myself, I know how to jump, but I ain’t light, and the Curry 4 was playable for three to four full court games before I had to change. One night, I played four games of full-court at 24 and went to another gym three hours later for three games in a different shoe. I played one game in that shoe and went back to the Curry 4. Don’t let lack of compression or fluffy foam curb your ideas because the Curry 4 gets the job done. 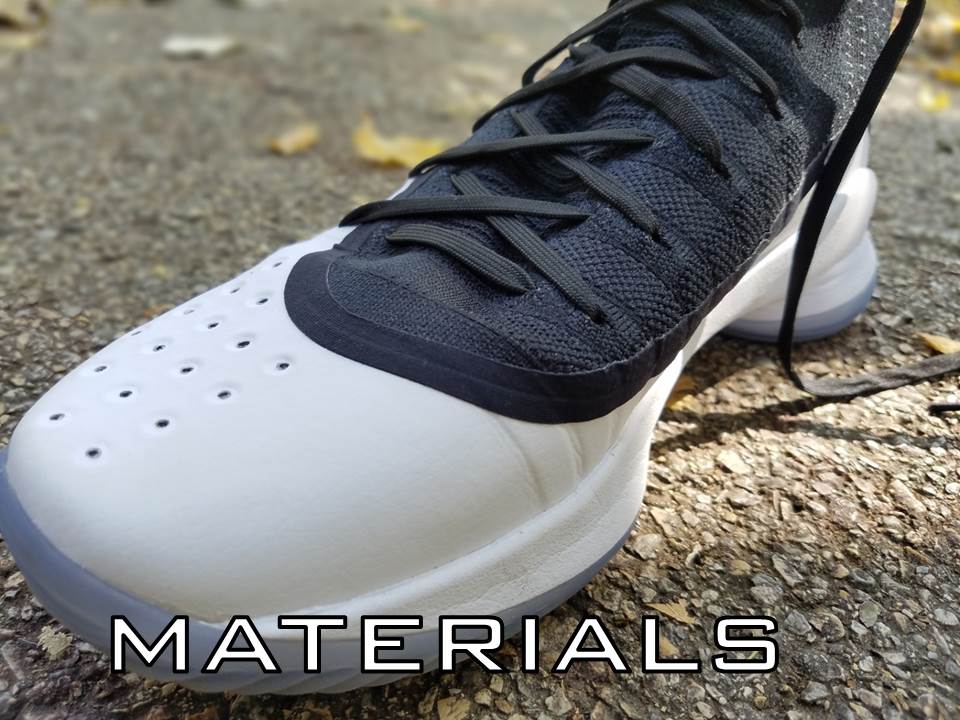 Probably the biggest change to the Curry 4 from the previous model are the materials. The 3 used Threadborne along the upper with a foam/mesh and fuse. The Curry 4 uses knit along the middle of the foot and the ankle sleeve with a microfiber synthetic that mimics leather in looks and (almost) feel along the medial and lateral parts (the white parts).

The knit is stretchy and form-fitting in all the right places while the synthetic panels are stiffer for support. The panels are still thin enough to not be completely restrictive, despite the height, and the shoe molded to my feet after very little break-in time (I had none, the shoe was ready out of the box, but others have had a game or two break in time).

The two materials are not fused or sewn together, they are heat-weld taped. This takes any busted stitches out of play. Overall, the new materials cut down on weight by a drastic amount while still providing fit and support. 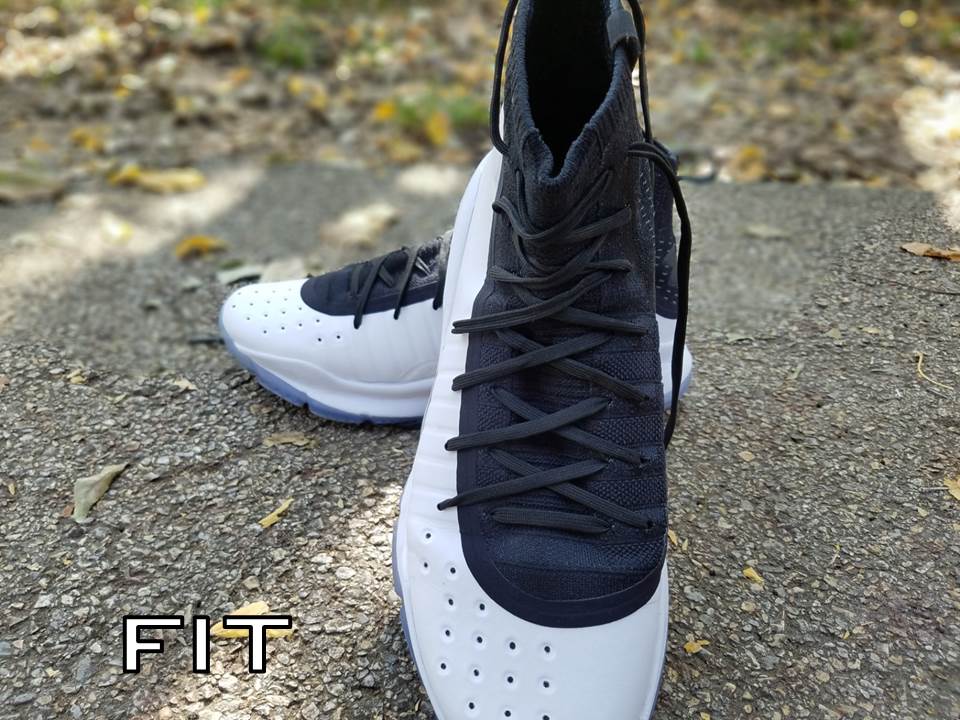 This is the best fitting Curry yet, and that is saying something after the incredible fit of the Curry 2. Once the shoe is on, which is easy to do with the stretchy knit collar, the heel and midfoot are immediately locked in. Before anyone argues with me about the collar, use the pull tab, stretch the opening, and stand up. Put the shoe on the floor, push your foot in, and you are good. As Bob says, or said, “Easy Peezy” (Stranger Things 2 spoiler alert).

The knit midfoot stretches just to a point, allowing for movement and motion with no hang-ups, but pulls the panels together to lock in the midfoot. The laces in that area secure the fit and can really be utilized to pull the panels up and around, helping the thinner upper to form to the foot. The heel is l-o-c-k-e-d, even without a large heel counter — really, no heel counter. Again, the laces and knit come into play. The knit, once on, forms to the ankle and heel and the laces pull the panels and upper around and down into the shoe, locking the foot inside the midsole panels.

Lengthwise, if you owned the Curry 2, get that size. I would not suggest going up or down. The shoe is made to fit and form like a second skin. Going up, unless you are an extreme wide-footer, will make the knit feel sloppy and defeat its elastic properties. If you go down, your toes will probably hit the end of the toebox and the synthetic has no give. 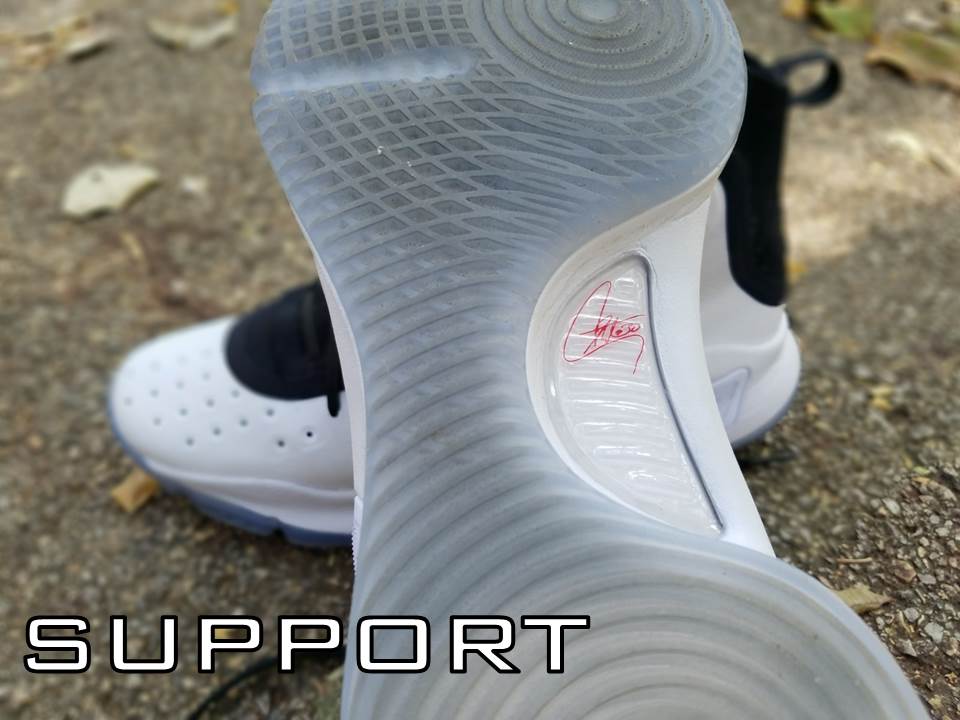 For a seriously lightweight and minimal shoe, support and stability aren’t a problem. Starting at the bottom, the base is wide and the midsole is solid. This is good for two reasons: it offers a large, stable landing area with no heel wobble, and it allows for easier planting for jumpers and pushing off for drives.

The forefoot is more of the same — wide with a large outrigger running from the end of the shoe back to the midfoot and solid foam underfoot. No give or wobble in the foam means your foot lands and remains level and solid, making your next move quicker and balanced.

The midfoot is supported by a speedplate in the midsole that runs from the midfoot to the heel. The plate is visible under the arch and on the lateral side of the midfoot; it provides a stiffness in high-torque areas for stability. This plate also wraps up the lateral sides, keeping the foot over the footbed during harsh cuts and quick moves. Starting block technology — the foot pushes off of a solid platform, in this case the midsole wrap, and the moves become faster and quicker.

An additional reason to not size up is stability. By sizing up, the fit becomes sloppy and support and stability are compromised. More injuries are caused by wrong sizing than the shoe itself, so trust your foot and trust the fit. 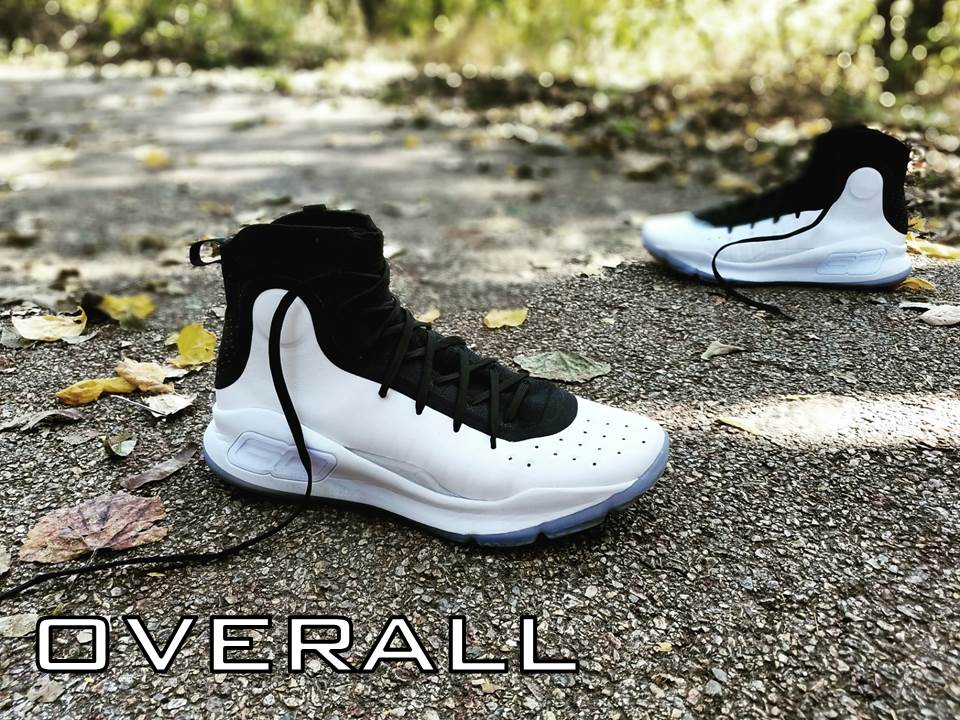 I wanted to dislike the Curry 4 when I felt the cushioning, despite the killer looks and what I knew would be great fit and traction, but I couldn’t.

Even though there is no perceived cushioning feel, the Curry 4 just never came off my feet. The feeling of fast, quick, responsive play was just too good to pass on. The last shoe that felt like this was the adidas Rose 1, and rightfully so, since the concepts are the same: low ride, minimal cushioning, and killer fit.

The Curry 4 is a great shoe for quick, ball-handling point guards who need speed with no lag. Wing players who slash and play light should be good, as long as you know how to land and jump. Bigs and power 4’s may want to look elsewhere, although the solid base and stability may be for you.

The way people wrote off UA and the Curry 3, the “downfall of the Curry line” some called it last year, was extremely premature. Under Armour has created a shoe for the most exciting point guard in the league, and it is a shoe that is exactly, from heel to toe, what Steph needs to perform at his highest level. The Under Armour Curry 4 makes more from less, and the league may be in trouble. 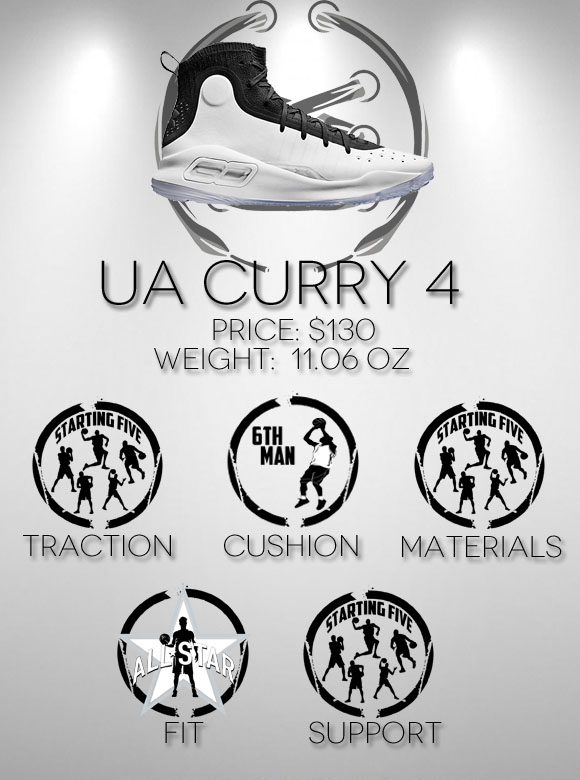