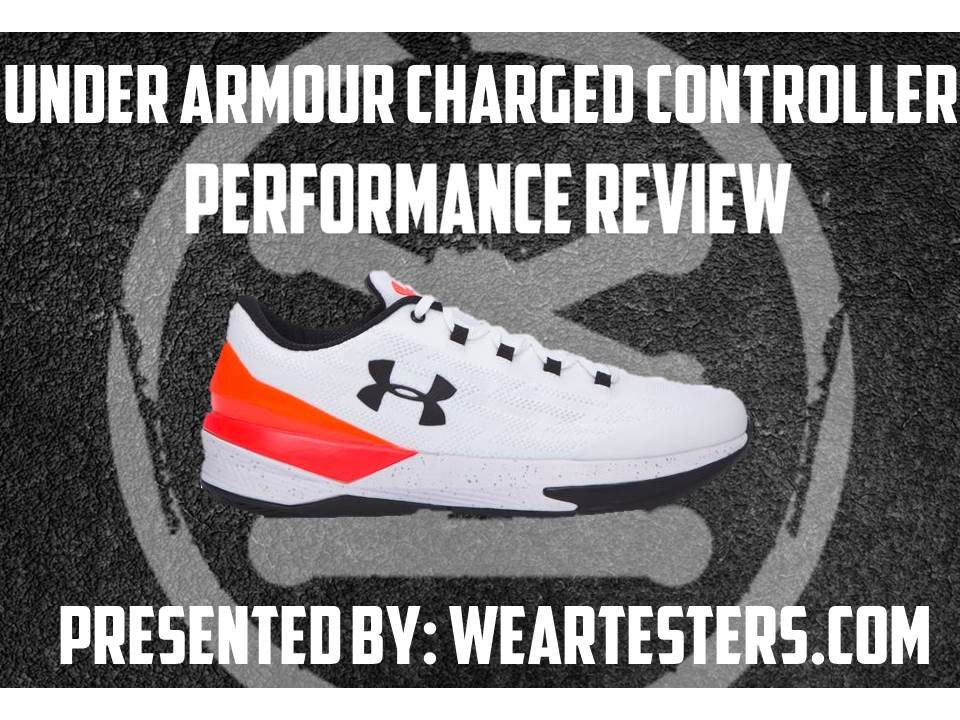 An Under Armour shoe that plays like the Kobe 8 — that’s a bit of Black Mamba with a twist. The UA Charged Controller has some flair, but does it translate well on-court for bigger players? 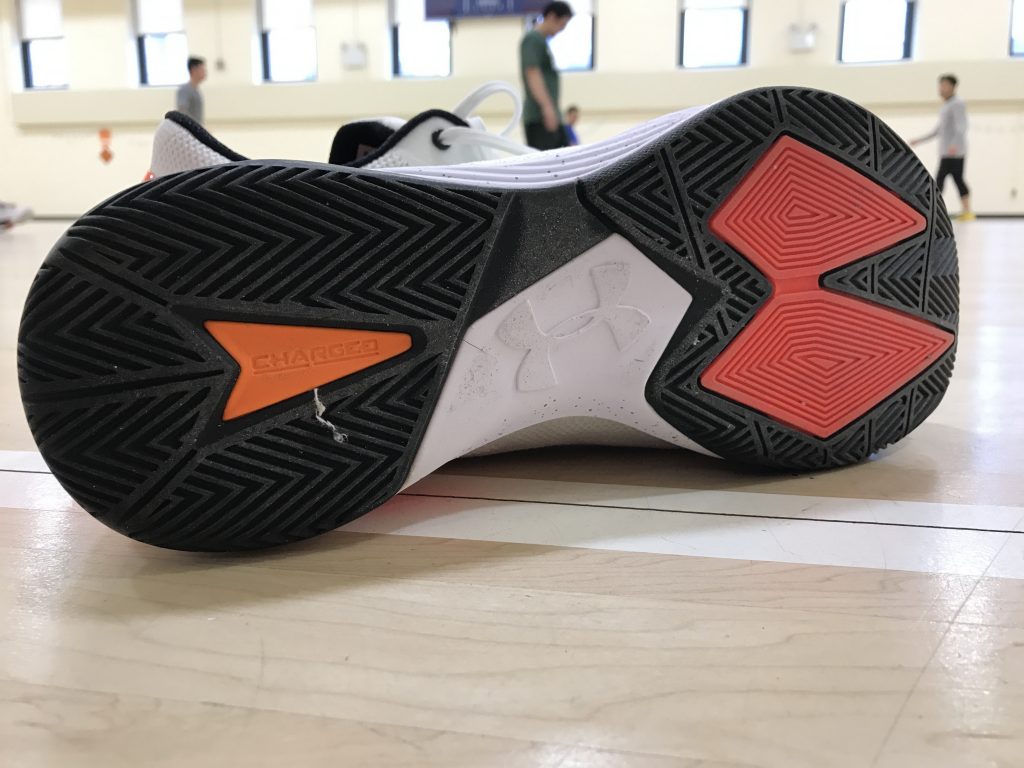 Traction –  Looks familiar? It should, because it’s the traction pattern from the UA Clutchfit Drive 3. While re-using tooling isn’t always a negative, traction on these bad boys was hit or miss. On clean courts, you’ll be good from the get-go, but when you come to dirty courts, you’ll be wiping more often — especially along the forefoot because the diamond segments grab all the dust possible. Outdoor use of this shoe would be good, but it won’t last you very long. There is definite room for improvement here. 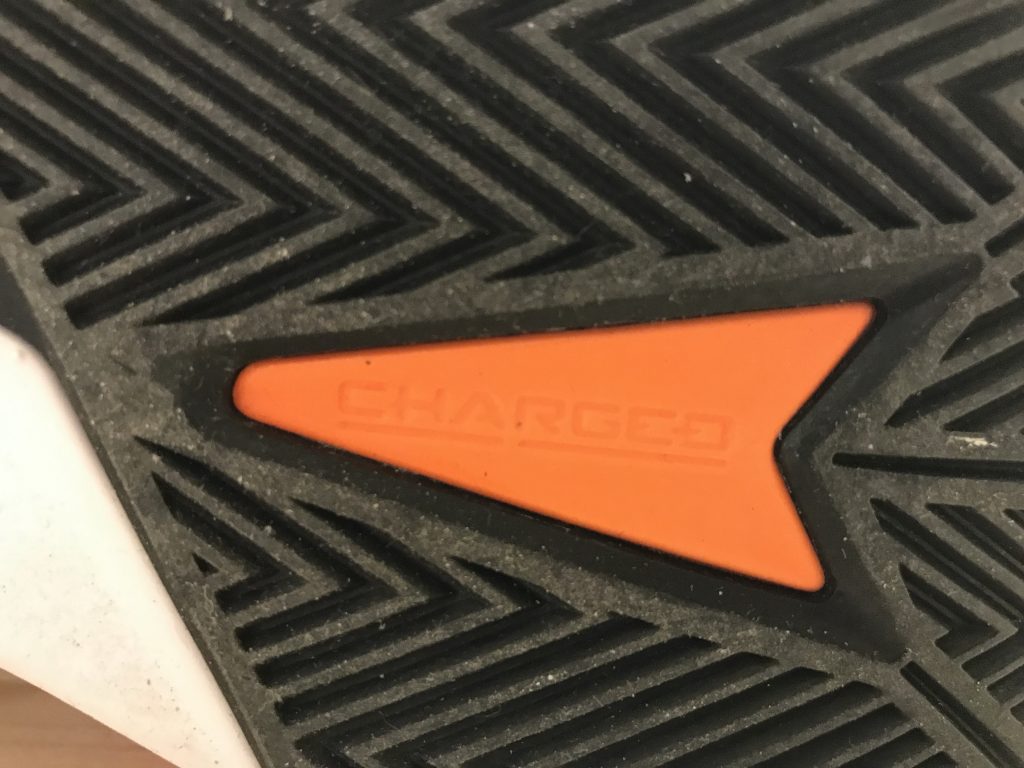 Cushion – My old knees hate me so much. The Charged Controller utilizes a full-length Micro G carrier with a Charged Cushion crash pad. However, from what I remember, Micro G used to feel plush and that isn’t the case for this shoe. The cushioning was on the firmer side to compliment the low ride for great court feel. The forefoot was rather stiff, but if you’re a guard looking for maximum court feel and like a low ride, look no further, as this shoe could be compared to a Kobe 8 (which isn’t a bad thing).

For a big man like myself that has an in-and-out game, I prefer something with more impact protection — probably due to my heavy footing and transitions. 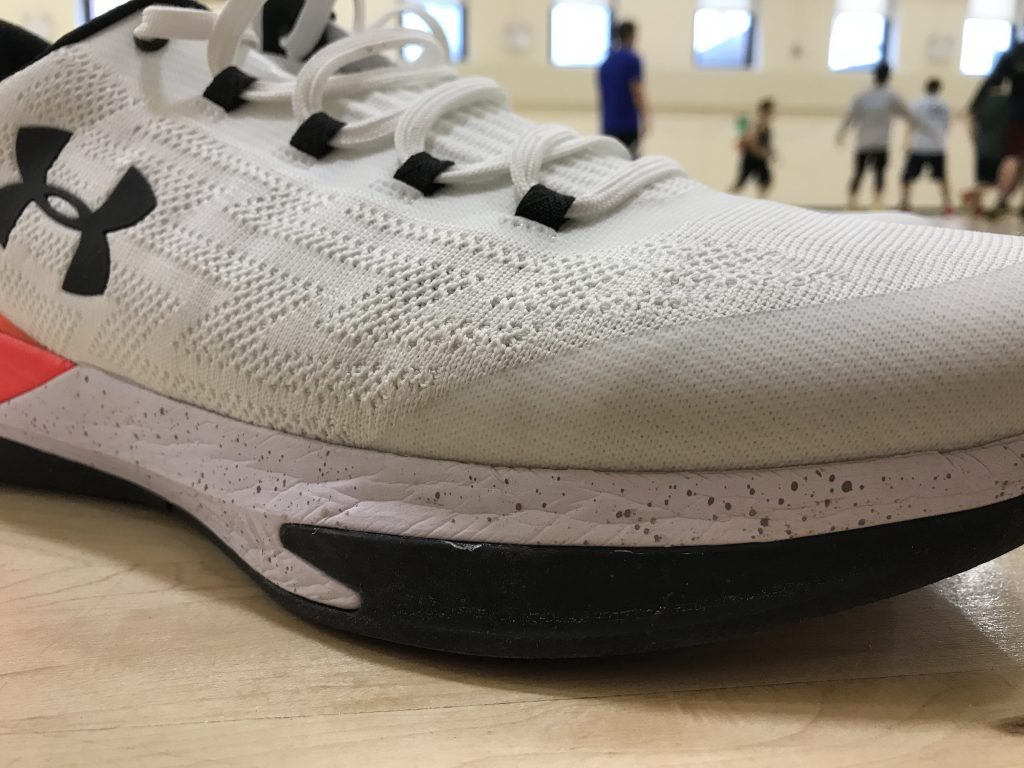 Materials – This is where the shoe shines. An all woven upper, some fuse on high-wear areas, and an external heel counter — plus solid rubber traction for $100. Wait….what? Yes, Read that again. The materials felt very soft and flexible. There is a minor break-in period with the woven upper, but it’s brief.

My only complaint here is that the thick fused toe rand causes pain on impact when my toe hits the tip of the shoe. It isn’t a experience and the effect is like stubbing your toe. 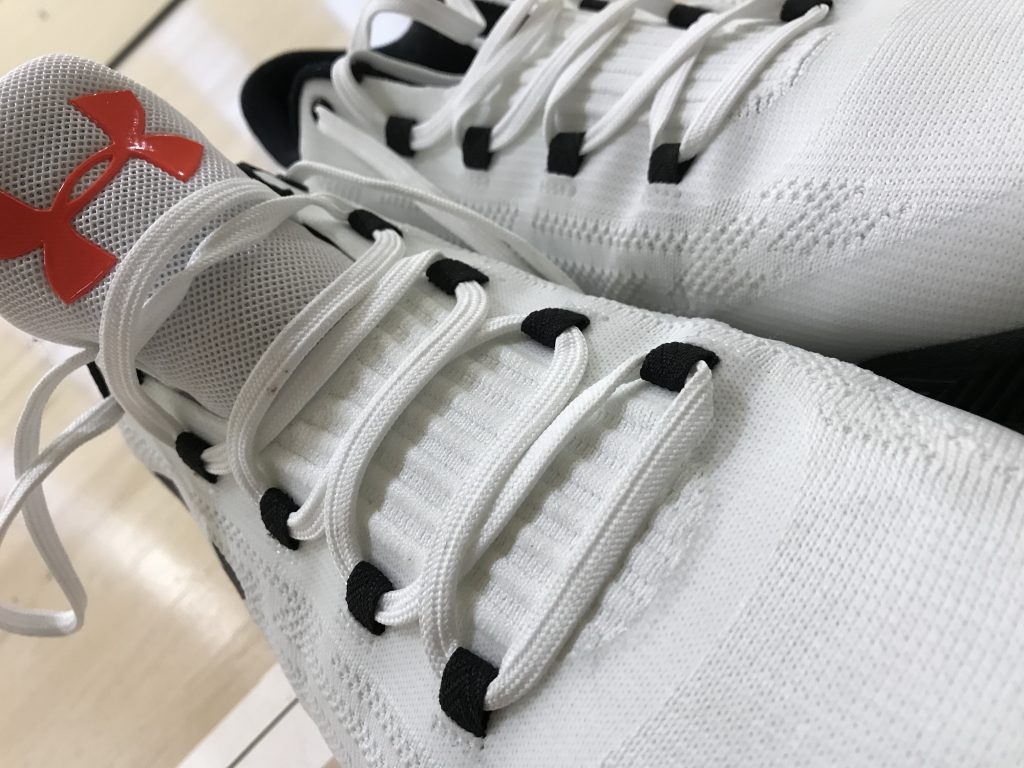 Fit – Spot on. The good people at Under Armour sent me a size 13 and I had no problems. I do have a slightly wide foot, and even with that, the shoe fit like a glove. The lacing system allowed for the adjustments I needed to make without restricting any movements or causing a lack of circulation. I didn’t have any type of heel slippage with the shoe and it even fit fine wearing a sleeved ankle brace.

Minor gripe: the elastic stitching overlay on where the tongue and the midfoot meet. Although it did provide extra containment, when lacing tightly it did pinch down on my foot. Again, minor break in period with the woven, but after a couple of games, the materials contour to your feet nicely. 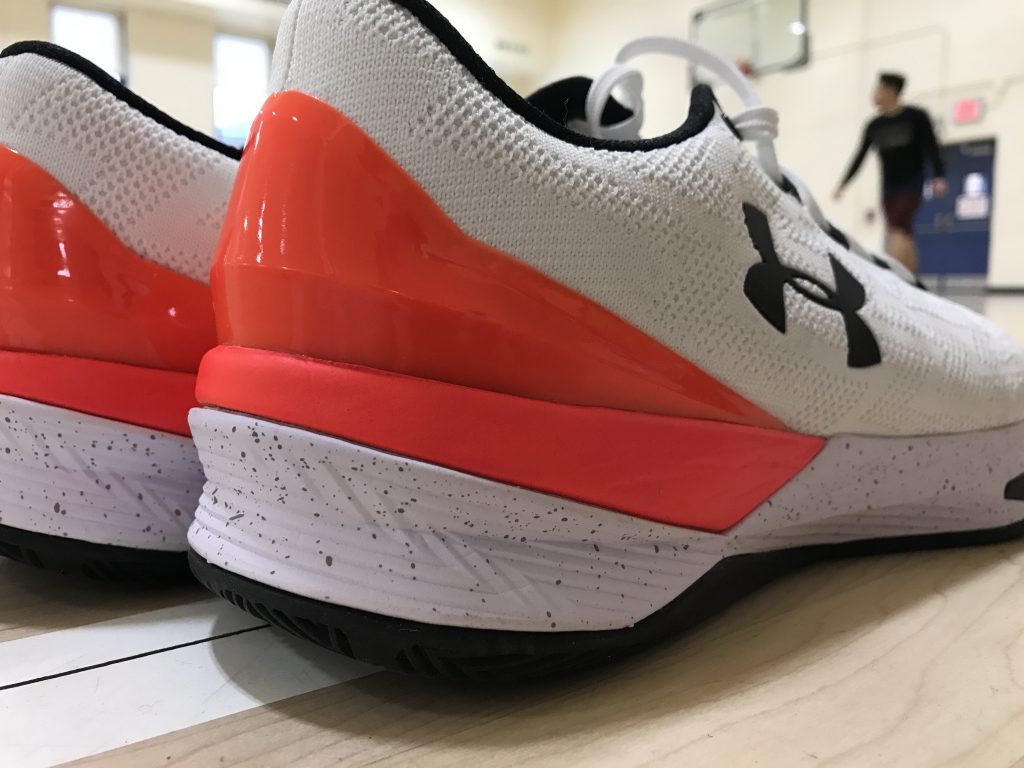 Support – Who said support doesn’t exist on lowtops? Not me. This shoe is built for guards who perform speedy and agile movements with minimal restriction. The materials, external heel counter, lacing setup, and herringbone traction offer everything that you need, and nothing you don’t.

The structure of the shoe is made to contour your foot nicely without bulk. People might say the shoe is minimalistic, and I don’t disagree — what’s the point of adding excess stuff to make the shoe heavier? Again, from a bigger person point of view, I did want more cushioning for impact protection. However, the UA Charged Controller plays smooth and works wonderfully off transitions. In other words, the shoe is just straight up reliable. 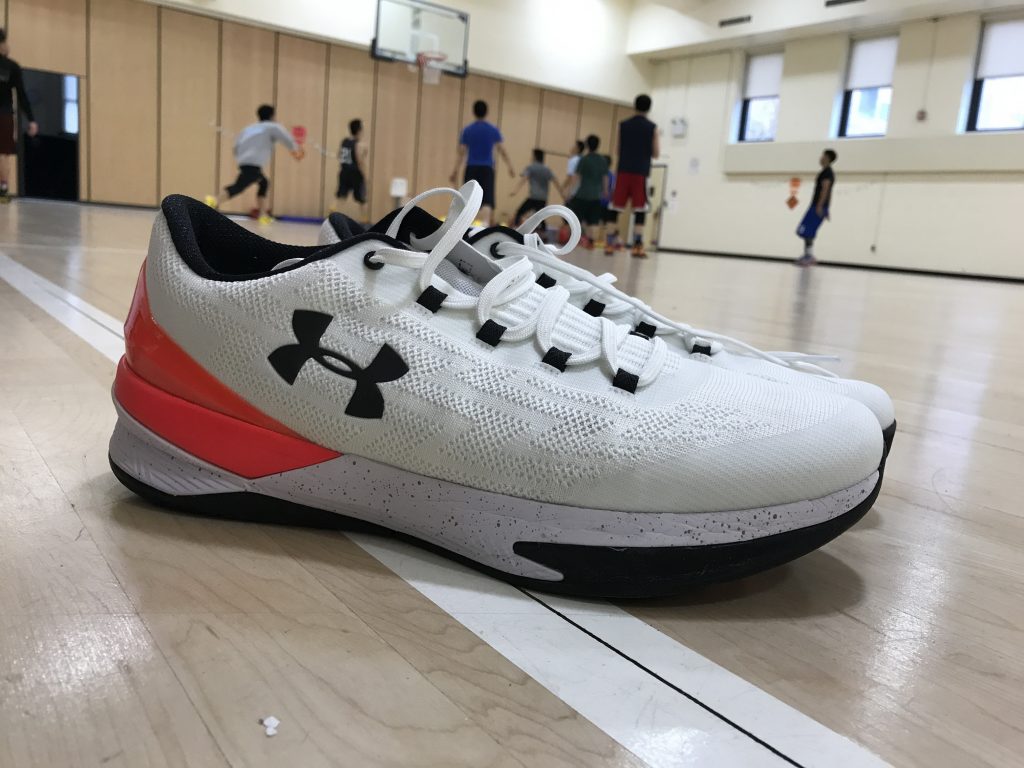 Overall – The Under Armour Charged Controller is a fantastic shoe. It’s a shoe that caters to your needs, whether you play a controlled game or plan to run all around the court. The shoe rides low, and it’s responsive, but it locks you in and keeps you stable to do battle on the hardwood.

If you play on dirty courts, you might be in for repetitive wiping, but if you’re playing on clean courts the opposition should concerned. With the materials, build, and overall performance of the Charged Controller, the price point, $100, is absolutely astonishing. UA isn’t just about just the Curry models. If you’re open to other options you might find gems like these — definitely worthy of consideration. 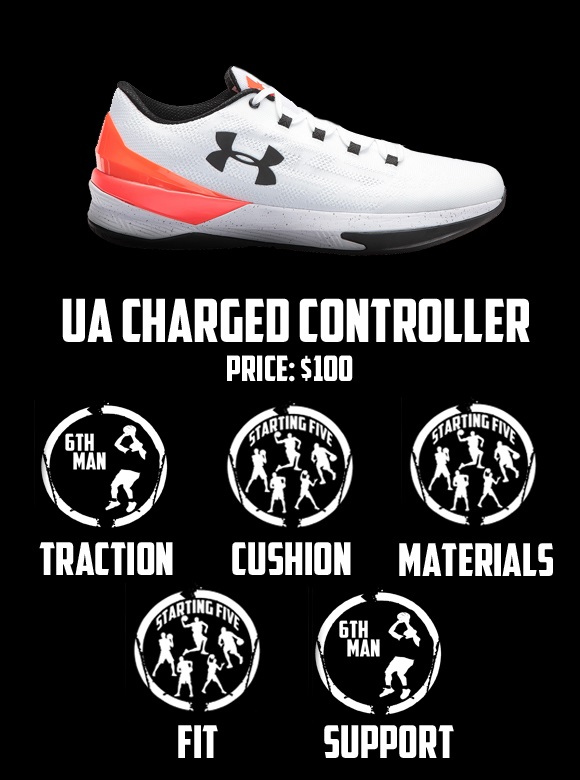