Today, I was looking back at my first Anta Performance Review on the Rondo RR1 and comparing it the Anta Rondo RR5. Man, this company has come a long way.

Translucent rubber doesn’t have to suck. And when it comes to these Chinese brands, it usually doesn’t suck at all. While the other brands like to use translucent rubber to show you the tech within the shoe — which is still cool looking no matter if it works or not — ANTA tends to use translucent rubber that actually grips and sticks to the court like glue. Even when dust and debris build up on the outsole its still is able to grip and bite the floor until you have the chance to wipe your soles.

In addition to it working well indoors, it also works really well outdoors. That part is no real surprise as most of the Chinese brands create models with outdoor basketball in mind since most of their consumer base plays outside. If I had to sum up the traction on the ANTA Rondo RR5 in one word “reliable” is the first thing that comes to mind.

Anta’s A-Shock cushion is used in the Rondo RR5 and it’s something that I’ve worn before in the brand’s Klay Thompson line. It usually offers nice impact protection while maintaining a low profile feel for those that wish to be grounded without giving up too much cushion.

This particular version is slightly firmer than some of the previous renditions I’ve worn, but I never felt like the cushion was lacking. It also really beats the heck out of that gel setup Anta used to use on the Rondo models, which, while absorbent, was very heavy and clunky feeling. In the Rondo RR5 you feel low and fast but still protected from impact. Yes, even on the blacktop. Again, it isn’t as bouncy or soft as some of the previous versions I’ve worn but it still felt great.

While I just had a bad experience with knit on the Nike KD 11, the Rondo RR5 makes up for it. The feel of the knit used here is thick — like Grandma’s Christmas sweater type of thick. The thickness wasn’t great for airflow, but for fit, feel, and stretch it was pretty awesome. I also secure within the shoe despite it being made up of thread (granted, it’s made up of a lot of thread, but still thread nonetheless.

In addition to the knitted build there are some fuse overlays in stress zones (lacing system) and the rear section of the shoe for support. This is a great use of modern materials and the reason why knit can be awesome in basketball. Trying new things with knits is cool and all, but not at the cost of function. If we could get this type of build for all knitted shoes then the brands would be onto something.

My normal size wasn’t available so I had to choose either 1/2 size up or 1/2 size down. Given the upper is knitted, I went 1/2 size down to avoid potential issues with lockdown and support. If you happen to like your toes at the edge of the toebox then 1/2 size down wouldn’t be a bad idea to achieve a perfect 1:1 fit. However, I’d still recommend that you go true to size if possible.

Once on, the Rondo RR5 felt awesome. The lacing system at the base of the shoe features nylon cables that you can feel when taught. I don’t feel that it adds a significant amount of lockdown compared to a more traditional lacing setup, but I feel Anta used this to avoid the knitted material from potentially ripping or tearing. As you move towards the midfoot and heel you get that standard style lacing that I tend to prefer, which has proven to be most effective over the years compared to Flywire/cable/strand type of lacing.

Lockdown was solid as well — especially in the rear of the Rondo RR5. It’s partially due to the last and lacing, but mostly due to the medial and lateral TPU support wings.

These TPU wings are lightweight and surprisingly strong. Carbon fiber would have looked a lot cooler and been a bit stronger, but there is nothing wrong with the use of TPU. These wings act as a cage on both sides of your feet ensuring that you never slide off the footbed. Ever. They also extend up to the midfoot which provides torsional support — removing the need for the more traditional shank plate underfoot.

I actually found the setup on the Rondo RR5 to be one of the best I’ve used. Normally, when I give support the Hall of Fame badge it’s because the support is so abundant that it’s hard to move in the shoe. This time around, the support is perfectly balanced; it’s everything you need without feeling like you’re playing in Frankenstein’s shoes.

The Rondo RR5 also sits atop a wide flat base with an extended outrigger at the forefoot. Again, this shoe has everything you could want out of a shoe in terms of support and it doesn’t feel like it’s hindering your movement in the slightest bit.

I can’t remember if the Anta Rondo RR5 released in 2017 or 2018, but since I’m just getting around to testing them now, it will likely be on my final list for best basketball shoes of the year. The shoe is a ton of fun to play in and it covers you from all aspects.

Top to bottom, the ANTA Rondo RR5 is one of the most well-rounded shoes of the year. It’s also one of the best when it comes to modern materials. Price never dictates performance as the shoe would feature everything it currently has whether or not you grabbed them for retail, under retail, or over retail — the shoe is the shoe. However, for just $85 bang for your buck is an understatement.

If Anta could start making these shoes in sizes above an 11 so my taller basketball playing friends could actually see what I’m talking about then that’d be great because they’re missing out on some really great shoes. 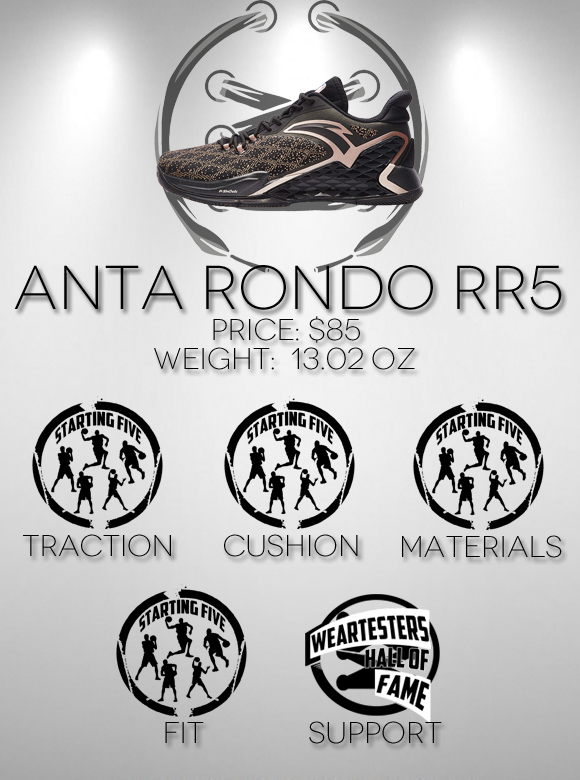