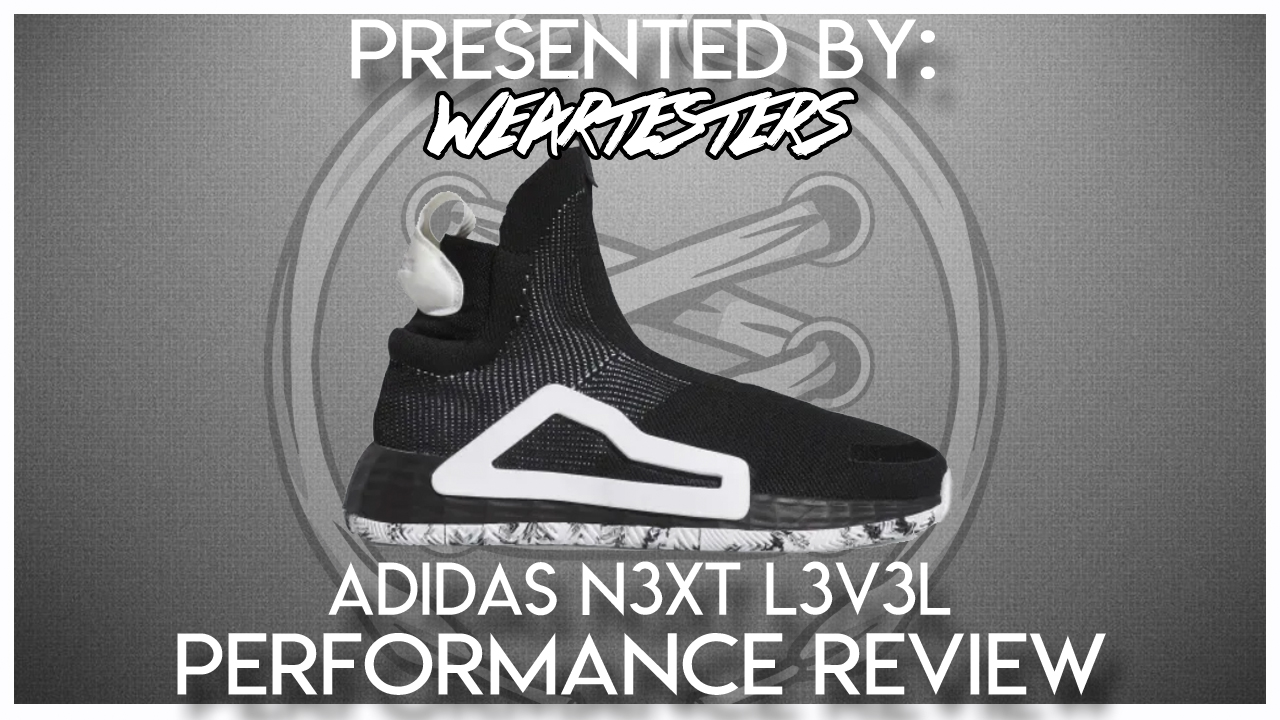 Easily one of the strangest shoes I have ever reviewed and I have done a serious number of reviews over the last 10 years. The adidas N3XT L3V3L brings the next evolution of the 3 Stripe hoops family to the public.

It’s one thing to look futuristic – does it perform? Well, it took a little over two weeks, a total of 9 wears and all of these words that you are about to read to find out one thing:

Although the pattern looks the same as the Harden Vol.3 in pictures, and for the most part it is, there is one small, minor change – there are indentations around pressure points of the outsole. The pattern doesn’t change in those areas – the full-length, multi-directional herringbone is just sunken in slightly. No clue why, as I couldn’t tell the difference at all in those areas. Actually, the pattern performed the same as the Harden Vol. 3 for me – super-grippy on clean and semi-clean courts but add some dust and you will be wiping quicker than your browser history when your wife wants to borrow the laptop. This means on my 24 Hour courts, I was good on Monday, okay on Tuesday, while Wednesday and Friday sucked. On clean floors, laterally and linear there was no issue anytime, anywhere, on offense, defense, or in transition.

Outdoors? Not a chance. The pattern is shallow, like the Harden Vol. 3, and the rubber is soft. Besides, outdoor courts need a rugged beast of a shoe – does the N3XT L3V3L look rugged? I wouldn’t guess these will last more than to point seven in a game to 11 outdoors, but indoors the traction is niiiice – as long as the floor is clean.

Adidas is introducing a new foam midsole in the N3XT L3V3L called Lightstrike. Described as being “super-lightweight and responsive”, the Lightstrike is both. The shoe looks like it would be severely unbalanced with a lightweight knit upper and a thick midsole, but the Lightstrike is so, well, light, that the weight is fairly even. As for response, I would say Lightstrike is a good middle ground of the soft Boost, without the weight, and the response of Bounce. Being a bigger guy, I was worried the foam wouldn’t hold up for long, and to be honest it may not – the creases are deep and numerous, which is usually a sign of breakdown. But while new, or at least close, the foam stopped all impacts on landing but stayed responsive on cuts that I never felt lagging or slower. The heel-to-forefoot drop is higher than most shoes lately, especially the Harden Vol. 3, and the forefoot rides low to the ground while still providing impact protection on jumpers and rebounds. If Adidas can extend the life – and again, this is only two weeks so my concerns may be unfounded – I could see Lightstrike replacing Boost in basketball (and eventually across the brand).

A full Primeknit upper usually means a fantastic shoe and the N3XT L3V3L is, well, it’s too early for that, but the upper is nice. The knit is solid and stiff (heh heh) where it needs to be – on the lateral and medial side panels and around the heel counter – and flexible and stretchy where you need it – across the tongue area and the ankle collar. The “tongue” area, especially, has to accommodate the size and shape of various feet without letting the shoe completely slide off of your foot and adidas has made it work. The heel/Achilles area of the upper has a suede pull tab (white on this colorway) that made me wear higher-cut socks: it rubbed me raw on the first wear and I learn my lessons quickly. The ankle/heel area is also heavily padded on the interior, but we will get into that more when we talk about…

The one area that should, and does, worry most people about the N3XT L3V3L is the fit. IT’S GOT NO LACES!!!! How can you tighten it to your foot and preferred fit??? Again the knit, both the elastic and non-stretchy parts, wrap your foot in a thick sock with only a slight bit of side-to-side movement in the forefoot. It’s not enough to be a deal-breaker, as the lateral TPU support piece keeps your foot over the footbed (that’s the infamous Pizza Hut© logo). The knit in the forefoot has no stretch, but as is the nature of knit, it will give with movement.

The heel is completely locked in because lining the heel and Achilles area is a thick internal pad that rings around the foot. This pad keeps your heel down and in the heel cup but also makes the shoe a pain in the @$$ to get into. The ankle area does stretch but the entryway is narrow and while it took some twisting and pulling, once my foot was in, there was no slipping at all. It’s really amazing when you think about it.

Of course, the biggest support piece is the most visible – the lateral foam support piece. Thankfully, it is a softer foam with no sharp edges to rub through the knit and create hotspots. The piece is set back far enough that the pinky toe area doesn’t get chafed or rubbed either, but it’s still stiff and placed well enough that the foot pushes clean off of the structure, like a lateral starting block. While sliding on defense or planting for crossovers and change-of-direction, the support piece could be felt holding solid and pushing back as I pushed off. Couple that with the traction and non-stretch knit in the forefoot and movements feel quick and explosive.

We haven’t seen the N3XT L3V3L cut open yet and I was too slow to look at the tech specs on adidas.com before they pulled them down (and I don’t have the access to the new designers like I used to), so as far as a midfoot shank, I can’t say for sure. I can say there is very little bending of the shoe in that area and my feet never felt pain during testing. The lateral piece runs under the upper and into the midsole, tying that area in for better lateral support (like a book end your teachers had in school – the tab goes under the books and bends up into the actual visible end piece. Same concept here). All in all, for a shoe with no laces, support is surprisingly good.

Adidas has made a really, REALLY fun shoe. Part of the fun is watching people in the gym react when you put them on. Most were pleasantly intrigued, asking what they were (if they didn’t know already) and when I told them “yes, these are basketball shoes” they wanted to know when and where to get them. The other part of the fun is the actual playing. The N3XT L3V3L plays lighter than it looks with a bounce to the midsole and an “I forgot I was wearing you” upper.

If you are a high-flying guard or wing, light on your feet and springs in your calves, definitely consider the N3XT L3V3L for your game. Small, shifty guards will be okay as well. Bigger guys may bottom out the Lightstrike but I can’t say for sure as they are still good, but show some serious signs of creasing and midsole breakdown. As long as you have a rotation, the rest of the shoe will fit just about anyone’s game – good traction and support, seriously good fit, and again, that cushioning.

The only thing that really holds the shoe back is the stigma of no laces and the price. Normally, price is not a concern – if a shoe works and fits your needs better than any shoe out there, what is it’s worth? However, with the basketball market where it is at the moment, $180 is pretty steep, even if it is semi-limited and ground-breaking. Not everyone will want or need the N3XT L3V3L and it isn’t meant for everyone. With the December 1 limited release selling out like it did, the curiosity is there for a laceless shoe. Luckily for us, the price matched the performance and was truly… N3XT L3V3L. 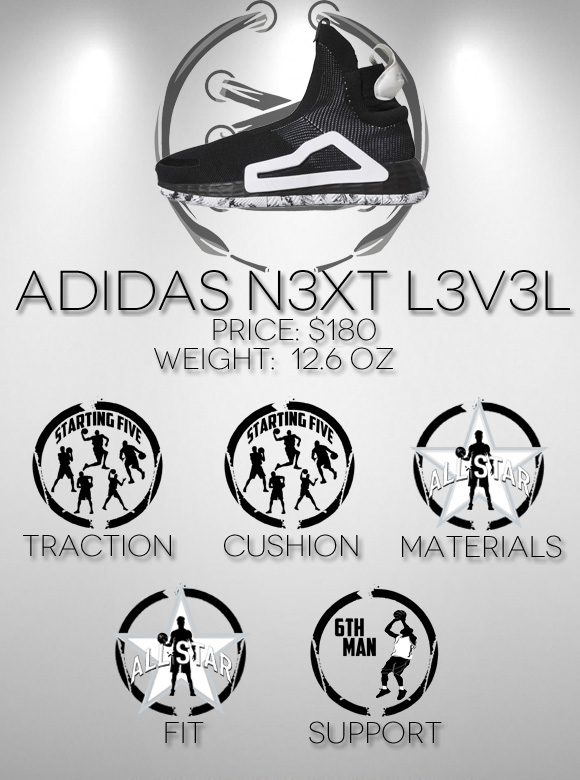