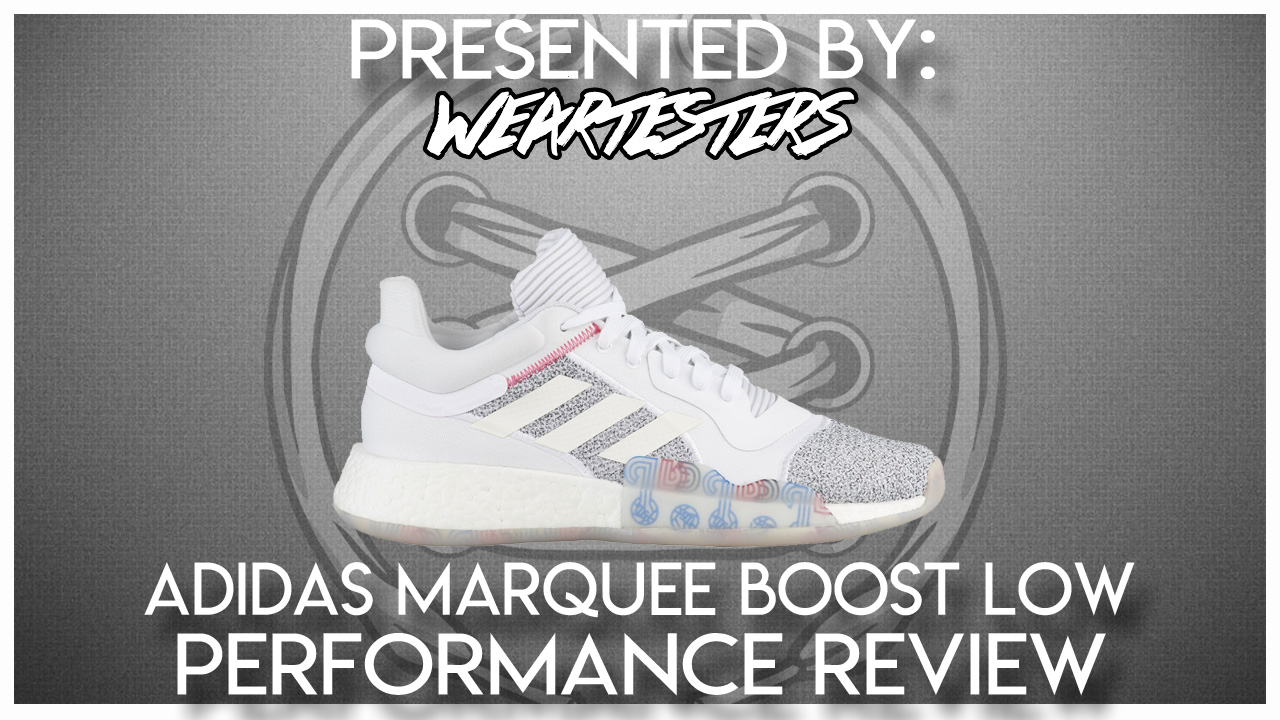 2019 — still hard to believe we are this far into the century. To roll into the New Year, adidas dropped a handful of silhouettes for what seems to be a new era in its basketball division. You’ve already gotten one perspective on the adidas N3XT L3V3L and now, we bring you our performance review on the adidas Marquee Boost Low.

Herringbone is taking over as the go-to pattern for adidas’ basketball line and the Marquee Boost’s traction was excellent…on clean courts at least. When a little dust was present, things got inconsistent – at least on the milky translucent rubber my colorway provided.

When traction was not good with dust, it was not good. Early on and a couple times later in testing, it was necessary to wipe so often that I was at a disadvantage on defense no matter what. When the choice is to literally get caught slipping on the perimeter or risk getting caught wiping and left behind by your assignment every few plays, it’s not favorable.

I would have liked to see the herringbone pattern wrap further up the outsole to see if that had any positive effect but I admit, sliding became less of an issue the more I played in the Marquee though still present at times. For those wondering, that circular point under the ball of the foot is a subtle nod to the adidas Top Ten, but not quite functional – at no point could I tell it was there. Also, the rubber seems hard enough to handle outdoor play, but consider my experience in dustier/dirtier environments.

Within 3-4 days of play I went from jaded with this Boost setup to placing it into seriously good territory as far as cushion. The Boost molding on the medial side helped make an otherwise flat setup, smooth in transition and everything you love about Boost is there with less of what you may not love about it.

If the Harden Vol. 3 is widely considered the best Boost setup in basketball, I’m willing to put the Marquee Boost right behind with the only disadvantages being minor growing pains and a higher ride in the heel. Otherwise, I say the Marquee Boost cushion is suitable for all types of player needs.

A healthy mix of materials can be found here including textile, knit and synthetics. Forget feeling premium in-hand — they feel great on-foot. For a shoe to wrap closely over the top of your foot, there aren’t really any pain points as everything finds balance between flexibility and decent strength.

This is a nitpick, but the padding of the tongue is not only thin but stops between the last two sets of lace holes. Needing to lace these all the way up left some pressure towards the top which was not painful, but not definitely not comfortable. Everything else about the shoe was satisfying – including that hefty molded collar and padding, which felt amazing.

A month later and still unable to find these on shelves in my area; I ordered the Marquee Boost in my normal size 11.5. Personally, I found these to be quite snug through the midfoot yet a little roomy on the sides in the forefoot. I strongly wondered if I should have gone down a half size, but I conclude true-to-size was the right way to go – especially because my toes want no parts of that hard rubber up front.

Heel slip was an issue at first but after working through the kinks, I eventually sat better within the heel cup and now it is nonexistent. As far as the extra room in the forefoot went, sock choice was key. With all my good pairs unavailable, a cheap, thin pair left me swimming side-to-side. Once I got back in my go-to options, I was set.

Since my foot shape wasn’t a perfect match for the Marquee Boost and I’m not a wide footer, I must call it a toss-up for those of you who are. If pairs are available locally to you, give a couple sizes a try-on for good measure.

Whatever minor issue I had with fit was muted by other support features on the Marquee Boost. You have a wide base that rides low in the forefoot and lateral outrigger with TPU caging to prevent you from rolling off the footbed.

The torsional support plate does its job. The lacing system is simple, but great, for midfoot lockdown and once settled into the heel cup, everything will line up nicely in the support department. No complaints whatsoever.

If I only took a week to judge the adidas Marquee Boost, then scores would be a lot different — but patience is a virtue. The irony of this modern take on an old school hoop shoe is that it breaks in beautifully as one would – a process I was happy I made it through. This may not be the best sneaker for me to continue playing pick-up on iffy courts, but with rec league starting soon on better floors, I’ll be looking in this direction unless something upcoming proves to be a better option. If you don’t mind a little break-in to get to an all-around good performer that can alternate on and off court, I say go for the adidas Marquee Boost. 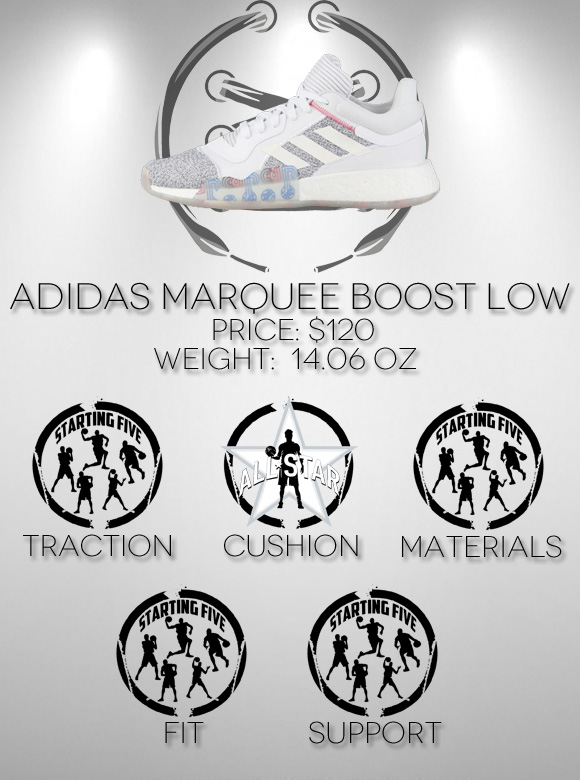