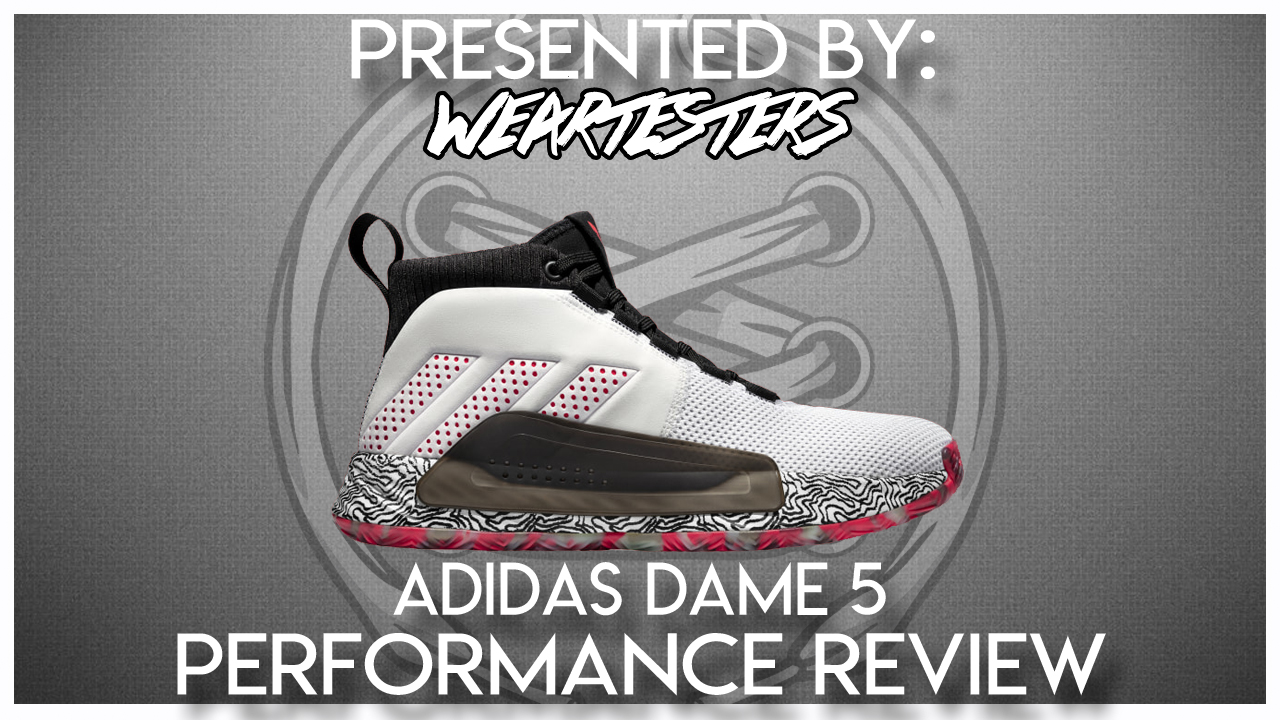 Lightly-recruited out of Oakland High School, he ended up only a two-star prospect and went to college at small D-1 Weber State. He only became the second all-time leading scorer in Weber history (in three years) and earned a draft night call by the Trailblazers. Much like his career, adidas has given him some hidden gems in his shoe game, at least the first two models. After those two shoes, everyone expects a serious performer for a relatively affordable price. The only question every January now is – will the new model top last year? Well, the Dame 5 is here and to answer that question, well, here we go…

Following the example set by the Harden Vol.3, adidas has been on a herringbone tear this season and the Dame 5 is no different. Where the Dame differs is the size of the tread – the grooves are spaced fairly wide and are deeper than we have seen from the Millennium, Harden, and N3XT L3V3L, so dust just keeps getting kicked out the crib. On clean and semi-clean courts, this pattern is strong, gripping on every move and let me accelerate quickly with no slips. However, on a dirty, old, unfinished court, the slips were real and numerous. This could be the multi-colored outsoles (that rubber sometimes has a slick finish on it) or the flatness of the herringbone pattern (no wiper blade angles on the ends) – or it could just be the nasty-@$$ floor, which is probably the problem. However just know that if you play on a bad court, you might have issues.

Outdoors, well, you might actually be lucky. The rubber compound is harder than most we have seen from adidas this year and the tread is deeper than most, so outdoors may be good for a couple of months, depending on how often you play outdoors and how rough your court finish is.

Possibly the most surprising detail of the Dame 5 is the Bounce used. This is the Bounce we missed on the Lillard 2 and Dame 3 (yeah, they changed the name between those two models): thick, bouncy, quick and responsive. Not quite on a Boost level of soft, there is a definite compressive feel when coming down on rebounds and jumpers, and it feels great. The best part? It’s tighter than Boost so once you hit the floor, it’s immediately into the next move. You do lose a little court feel compared to the 3 and 4 but I will gladly give up slight court feel for some added cushioning. The best part of the full-length Bounce, besides all of the above? The transition. As I have gotten older and my motions on court have become more efficient, I have a serious appreciation for smooth transition and the Dame 5, whether running full speed or stopping and cutting, was smooth and thoughtless – just make the move and the shoe is right with you. Perfect.

Well, it couldn’t all be roses (get it – Portland, Rose City, Rose Garden). For some reason, brands (well, mainly Nike and adidas so far) have fallen in love with this felt/suede material this past year and a half. The Kobe AD Mid started the trend, the Kobe AD Exodus had it, the adidas Pro Vision and now the Dame 5. This material IS NOT GOOD!!! It feels cheap in hand and wears terribly; it gets dirty super-quick, balls up like lint and holds moisture and heat like a champ. Going full-mesh like the forefoot would have been better, but the need to break up the upper construction had to be met, so we get felt.

Speaking of the forefoot, the mesh is soft, thick, flexible (no glue!!!) and has a foam padding on the back for comfort. It honestly feels like a 90s running shoe as the comfort is on point. The interior is thickly padded all around, especially in the heel area. This gives the shoe a bulky look but doesn’t feel that way due to the padding filling all empty space, making fit a strong point (more later). The tongue is an actual tongue, no one-piece booty construction here, and the feel and fit is…

Hey, we are talking about fit now!!! First things first – just like the previous Dame’s, you can probably go half-size down and be fine. The materials are soft and comfortable enough that a little tightness won’t be painful and the shoe will stretch with you. However, I like about a half-inch of length between my big toe and the end of the shoe and true to size hit that mark for me. Either way, you should be good. Wide-footers, true to size should work for you too.

Now, on to the interior – heavily padded and molded inside means once laced up, your foot is going NOWHERE. With the exception of the Lillard 1, fit has been good-to-great on the Dame line, and the 5 may be the best. The heel has segmented padding all around the foot and the lacing system runs high enough to pull your foot down and into the shoe. The sides have foam backing the mesh and felt and again, with the lacing pulling the shoe up and around your foot (something bootie shoes don’t do as well), the midfoot is completely locked over the footbed.

The Dame 5 support system is based primarily on the lacing system tying the foot down and into the shoe – and the TPU lateral support wing (didn’t think I would miss that did you?). When we first saw the images, we assumed that wing would be a hard plastic structure to assure the foot stays solid over the footbed and stopped all lateral movement. Not the case – the wing is actually a soft rubber that still holds you steady but doesn’t dig into the side of your foot causing hotspots (at least not my semi-wide feet). The way it ties into the midsole provides even more stability keeping the upper and bottom feeling like one.

Speaking of the sole/midsole, it is W-I-D-E. No real outrigger but the midsole and outsole is flared all around. Normally this lends to a clunky, blocky feeling, but the Bounce and fit take that away – all we get is a smooth transition all around. There is no midfoot shank that I can find (I really don’t think any Dame shoe has had one, especially not like the Harden’s or Rose’s), but the midsole being so large and solid will help with support on all but the biggest of players. The heel has an internal heel counter that comes just to the T in the YKWTII logo on the heel, so it doesn’t ride extremely high, but it does extend to the arch of the shoe, and the way the laces tie down there is no scary instability anywhere in the rear. Solid.

Best Dame shoe yet and that is saying a lot (I had 4 pairs of the Lillard 2 and 5 pairs of the Dame 4). The 5 combines the best categories of the previous models (traction as good as the 1, cushion of the 2, fit of the 4, almost support like the 3) and gives us a shoe that any player can wear and feel strong. Great traction (depending on conditions), seriously great cushioning and a fit that allows most feet to feel loved. If you are looking for a shoe that will play any time, anywhere, well, YKWTII. If you are looking for a high-end, luxury feel and material on your shoes, well, there is always next year (the materials work, but c’mon – Dame deserves better). If you don’t like the colorways so far, just wait – there will be many, MANY more coming, just like the 3 and 4.

So far, this season has been amazing for adidas. Just when we thought the game may be over for Three Stripes basketball (they lost the NBA, began losing athletes and not re-signing others), the AdiFam came back strong with some of the best performers of the past few years (see the Millennium, Harden 3, Marquee Boost) from any brand. It’s just amazing that the best of the group is the cheapest, hanging in a lower price category, like a diamond in the rough. Hidden gems, indeed… 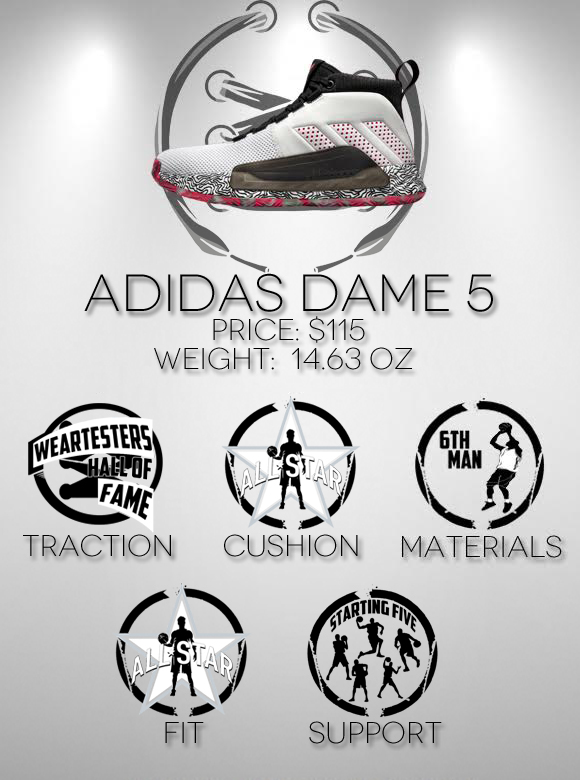