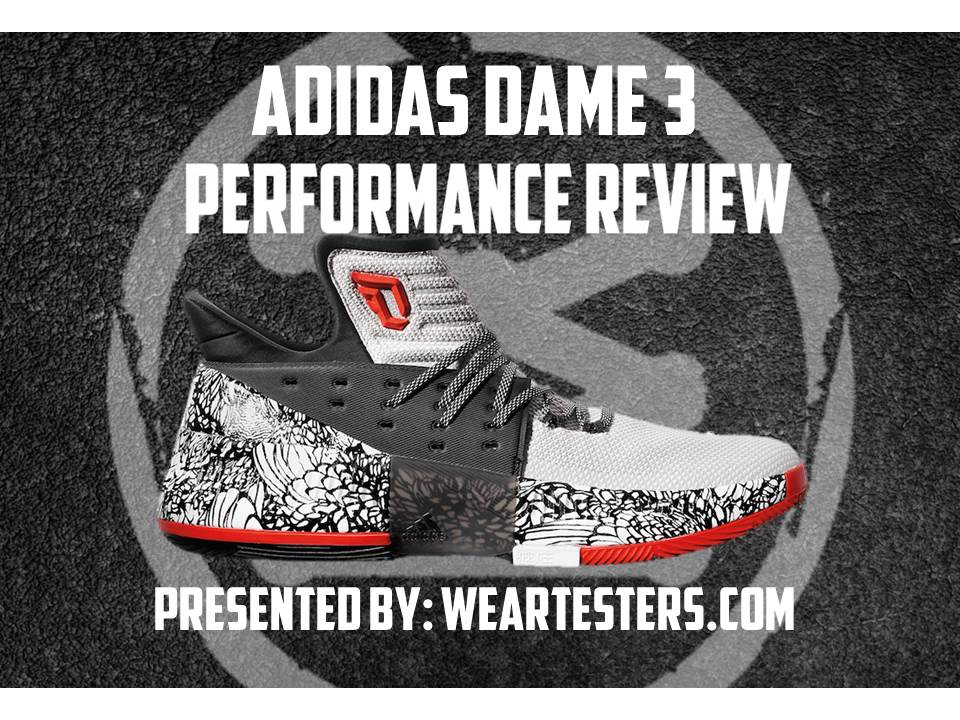 Every year it seems Damian Lillard gets bigger and better, and every year his signature shoe with adidas seems to follow suit. From the 1 that he leaked on his Instagram and Twitter accounts, to the 2 that was a performance monster, now the 3 is in hands and on feet. Does the flow continue or did adidas drop the mic with the 2? 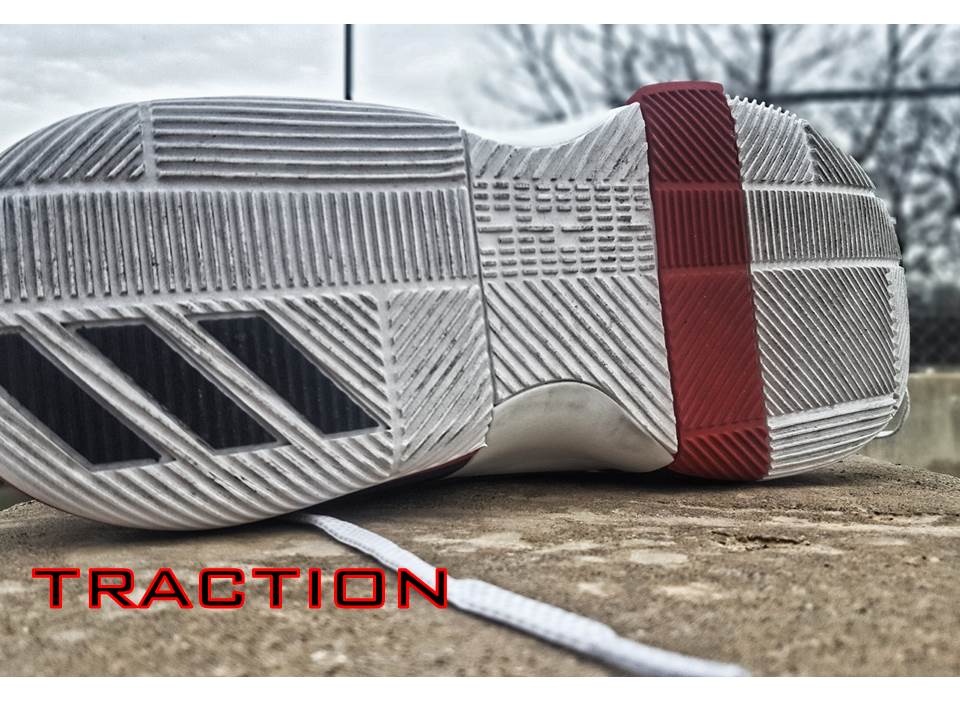 adidas used to have tons of problems with traction — bottom line, it sucked. That is no more. Besides the Rose 7, the Dame 3 may have the best traction out right now. It sounds crazy to say, but it is almost too good.

When making quick moves and cuts, a little bit of slip is expected, especially on the floors a lot of us play on. The Dame never, ever slipped on me, and that was tested in four different 24 Hour Fitness floors. It almost messed my game up, coming off curls or penetrating and compensating for some slip, but my feet were right there. While testing these I was also working on a shoe from another brand that had me slipping everywhere. On the same floor, the Dame 3 was glue.

The rubber is soft and the blade pattern isn’t really built for outdoors, so I would beware of durability in that arena. For anyone else who gets to play indoors, the Dame is about as good as it gets. 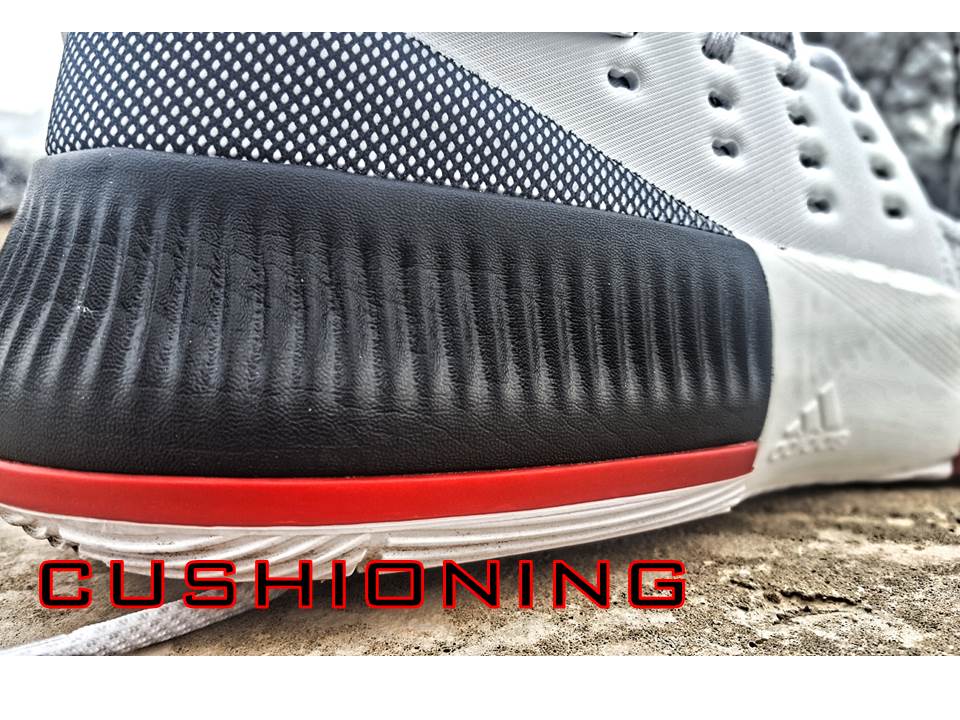 Bounce was a revelation last year in the Lillard 2 !- low ride, bouncy (DUH!), and durable. More of the same in the Dame 3. The forefoot rides extremely low but still keeps it bouncy and responsive. Any quick moves were instant — push down and toe off and there was no lag time — just starting blocks to get into the next step. Impact was not an issue until after five or six games, when landings aren’t as controlled and legs start getting tired, so the knees and ankles feel every jump a little more — but that is an extreme situation (that’s five to six games of full court in one night — yeah, we play in them). The heel rides higher and the heel-to-toe drop is definitely felt as a few quick stops had my toes sliding forward, but it wasn’t an issue of pain or bumping the end, just felt a little awkward at first.

Impact out back was gravy — mostly unnecessary but appreciated when you need it, and we all land back every once in a while. One note: there was a bubble under the balls of my feet in both shoes. While walking around casually I could feel it compress and rebound, but while playing it wasn’t noticeable. May just be my pair, who knows. 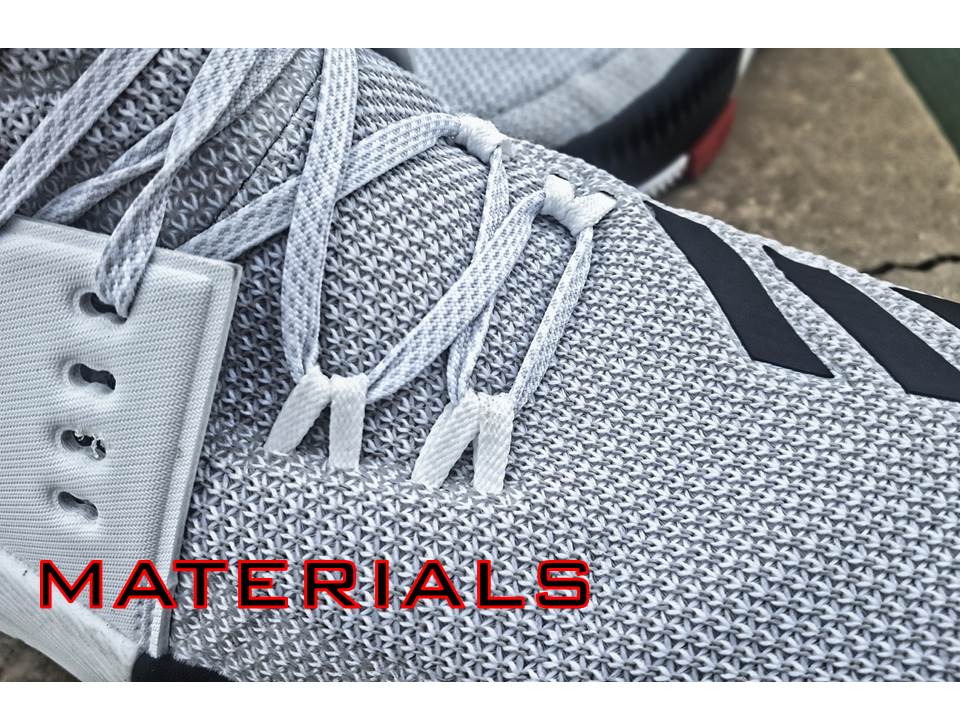 Now this would seem to be a step back, wouldn’t it? Every company has its own woven upper materials, so why would adidas go back to a mesh/fuse-like material for one of its biggest shoes of the year? Simple, it works.

The forefoot is called FUSEDMESH and it is like chain mail armor; it flexes and pulls with the foot, but when stress is applied it holds. It isn’t a woven, with threads, but rather a mesh built like a woven. Areas of high stress are super-heated to meld into seams so no overlays for separation or hotspots. The mesh is then backed by fabric and padding to keep the rough material off your foot — and it is rough to the feel. This FUSEDMESH should prove to be more durable than the Jacquard from the Lillard 2, but starting off it is stiffer. After about three games they were broken in and feeling good, with perfect flex across the toebox during transition.

I was hopeful the midfoot cage was leather but instead it is TPU. Not bad, since it won’t stretch during wear, but the softer leather would have looked killer over the mesh. The back half of the inner bootie is neoprene and contoured around the ankle collar for that super-soft fit and feel. 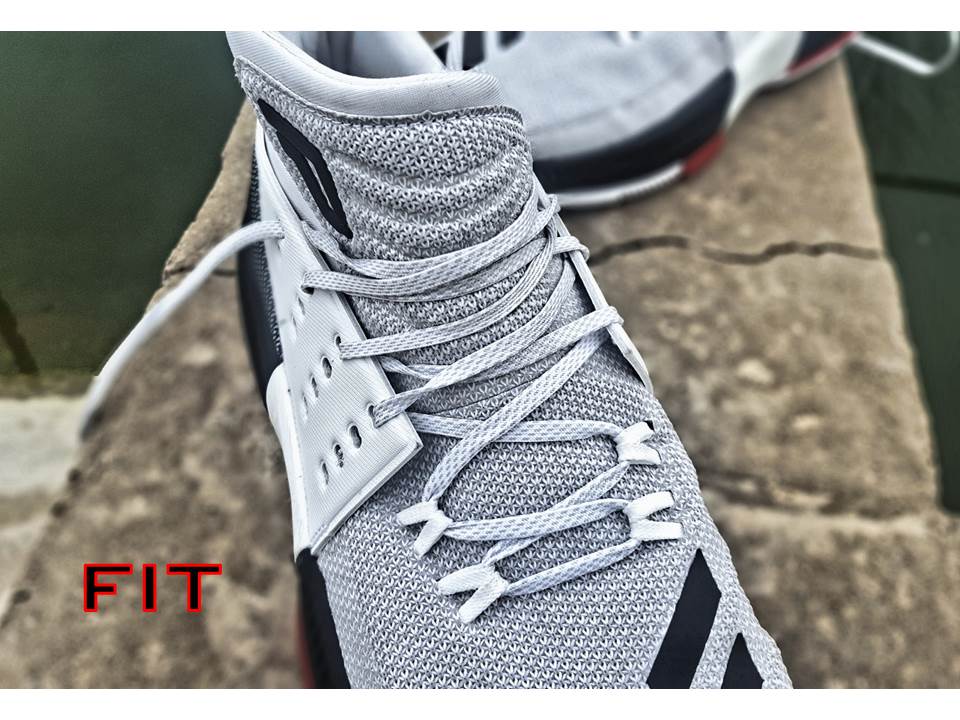 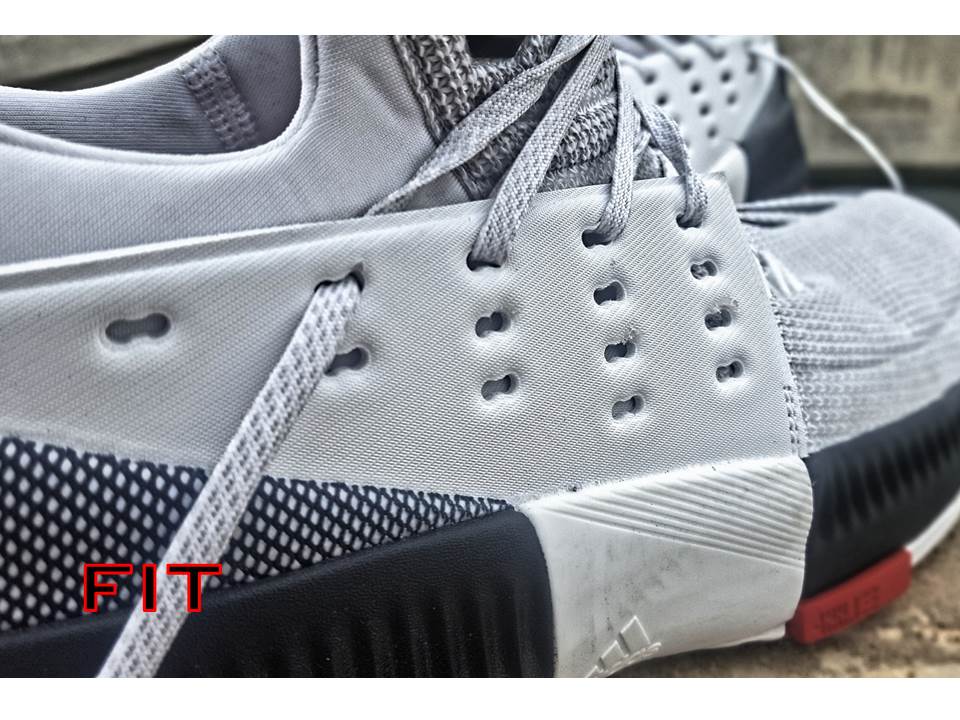 Now this is the part everyone should love. All of those holes above are lace holes. It doesn’t matter if you are Shreck or Banana Boats — everyone should be able to find a lacing style to fit their foot. The picture directly above is how I wear mine, but I played for at least a day before I settled in, and even now I find myself playing with it. This is where the people who grab a shoe and complain about the fit out of the box will have to wake up. Try the different holes before complaining the shoes don’t fit, or that the heel slips too much.

The only issue that I came across after lacing like this was lace pressure across the front of my ankle. The tongue could have used a zone of GeoFit right under the laces, but with everyone lacing different, how would they know where to put it? Still would have been nice and helped with the little bit of lace pressure I experienced. Even lacing this way, I still got a little heel slip while playing. Not as bad as the Lillard 1 (could NOT get those locked in), and it was very minimal, but it was there. Maybe I still need to play with the lacing…

Length-wise, true to size was perfect for me, but that left about a thumb’s width at the end of the shoe. Half down could easily be done if you want that snug length, but I want a little extra toe room, especially with the times my foot slipped a little forward. 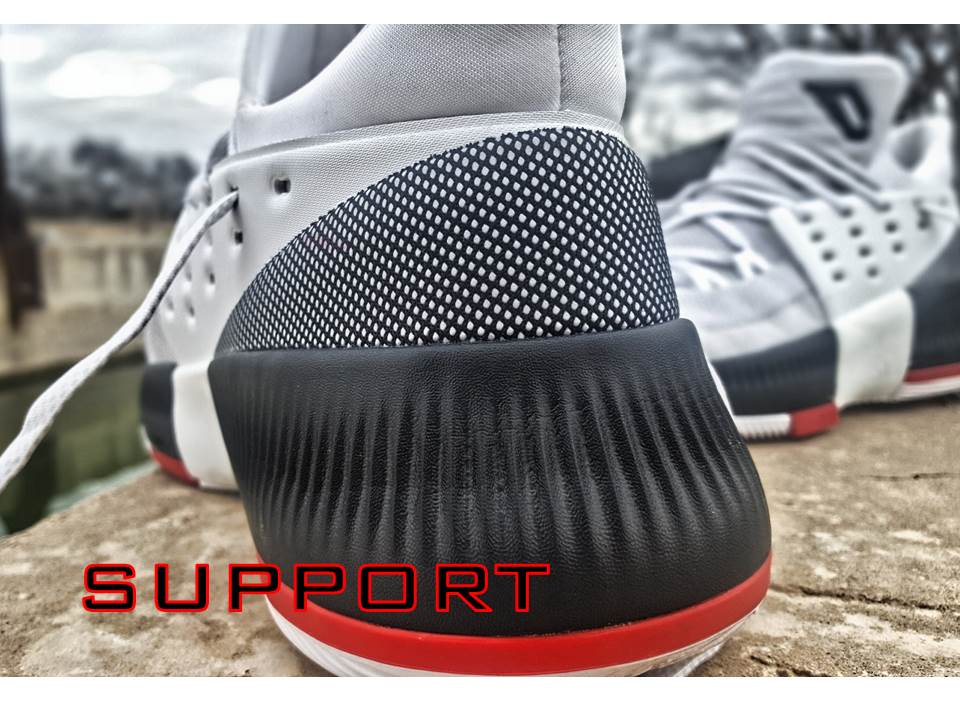 Now that’s a heel counter!! Look at that beast. Your heel sits down into the black gills just to where the crease is, cupping your heel and keeping your foot contained over the footbed. The black webbed area is the actual counter and it is stiff and runs all the way to the midfoot cradle. Then the midfoot cage runs back inside the heel counter, tying the heel into the midfoot support even more. Honestly, it is almost too much, and at first gives the heel a very stiff and clunky feel. After you dial in the lacing and play a couple of games, the padding and midsole break in and transition smoothes out, and you are left with a shoe that keeps you upright in even extreme cases. I landed on two different feet while playing in these and did not roll an ankle either time. Underneath, you have a base wider than the upper, giving solid grounding.

The midfoot support is outstanding, as it should be with that saddle system. The sharp points at the front never come into play (that was a fear on seeing initial images). Again, play with the lacing because the wrong style will put your foot to sleep with a quickness.

The forefoot has a slight outrigger — that’s the red portion of the midsole — but the mian thing keeping you stable there is the fact that your foot sits down inside the black midsole cup. On hard steps and cuts this will keep you over the footbed so you don’t break your own ankles. 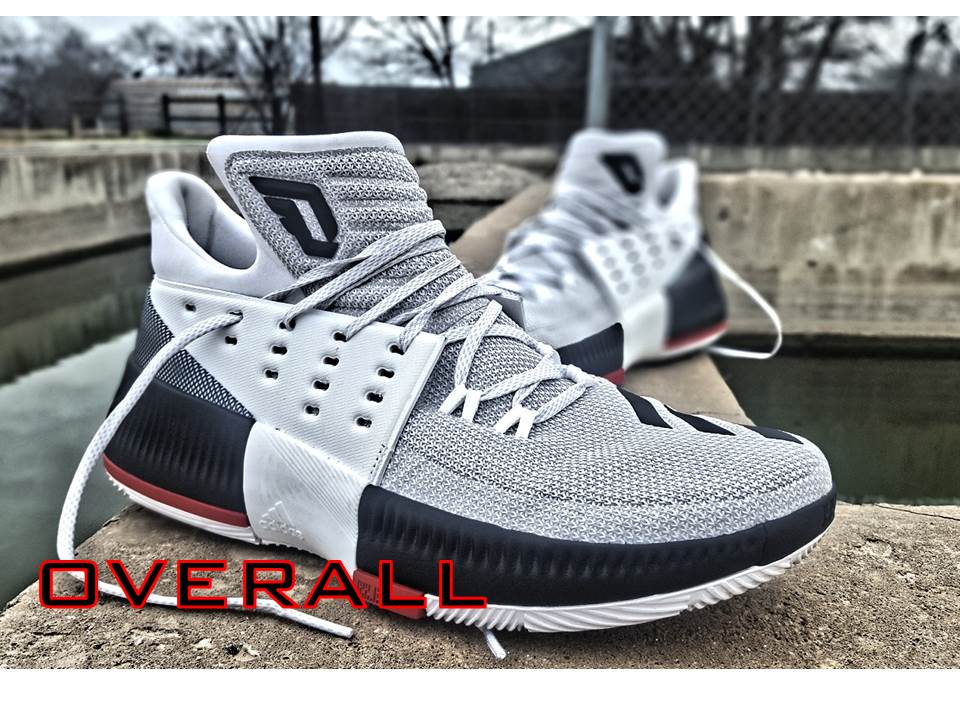 As good as adidas has been the past two years, 2017 starts off promising even more. The Dame 3 combines the same things that made the Lillard 2 a hit — great cushioning, good traction, killer materials, and a price that can’t be beat — into a package that, honestly, looks great too. Check out the Dame 3 if you need court feel, cushioning, and traction with a durable upper. If you are looking for anything else, well, what’s wrong with you?

Honestly, what else could you want? Maybe a little less heel/rearfoot support, but for most players, that extra bracing will be welcome when you land on a foot. More colors are coming, just like the 2, so surely there will be a colorway for everyone, and when there is, look out. adidas ain’t stopping, neither is Dame, now let’s see how many badges read Hall of Fame. 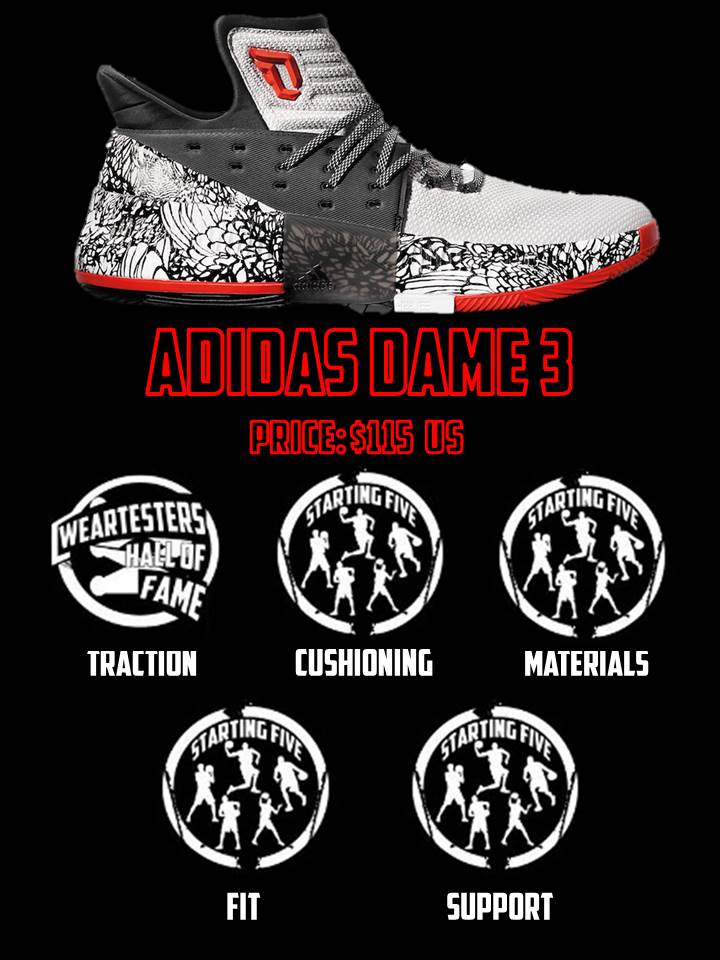