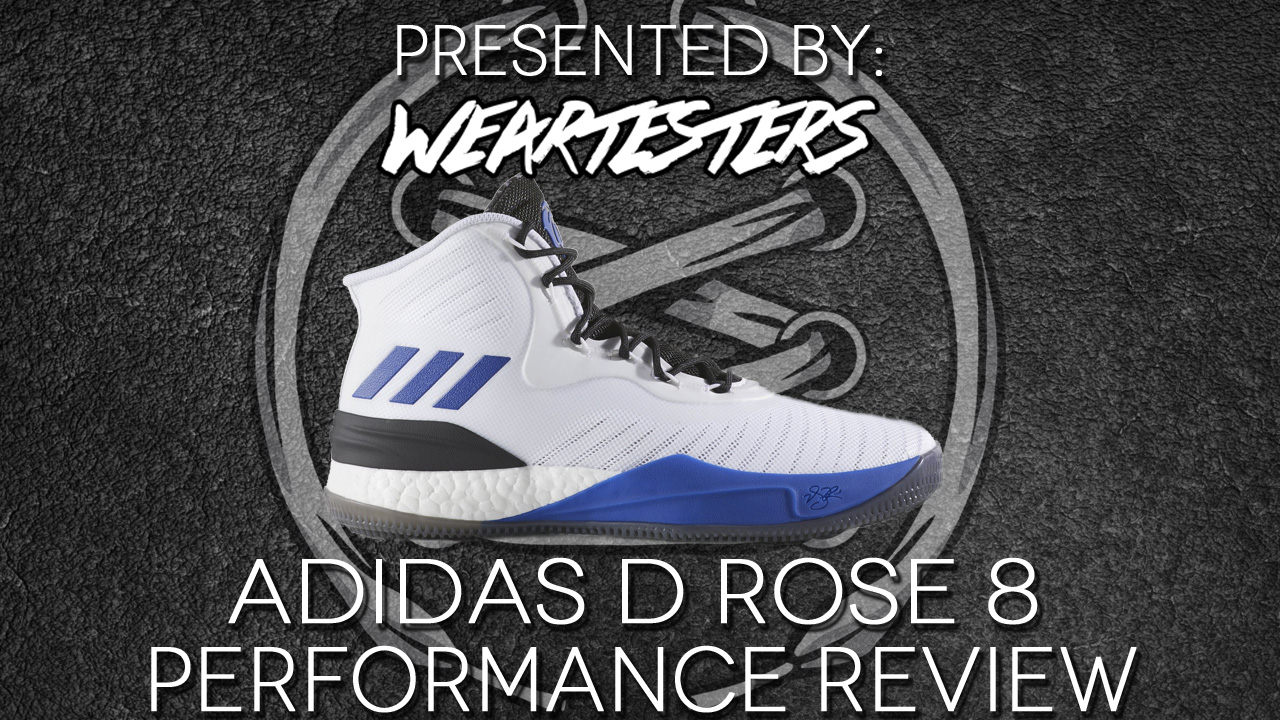 Since Day 1, the Rose line has been known for performance (well, except maybe the 2 — that traction…), especially last year with the Rose 7. That shoe, wow — best traction, maybe ever, full-length Boost, available with a Primeknit upper, and supportive without being restrictive. How does adidas improve on that for the D Rose 8?

Well, from first looks, adidas didn’t. Yeah, looks aren’t everything, and they matter nada to performance, but from first impressions the word “budget” came to mind. The stripes look slapped on, the matte finish on the midsole looks off, and the mesh and fuse is cutting edge 2012. With all of that said, there is no way this shoe could be as good as the Rose 7, right? Correct — it may even be better. Read on…

The adidas D Rose 8 is available now at Eastbay.com 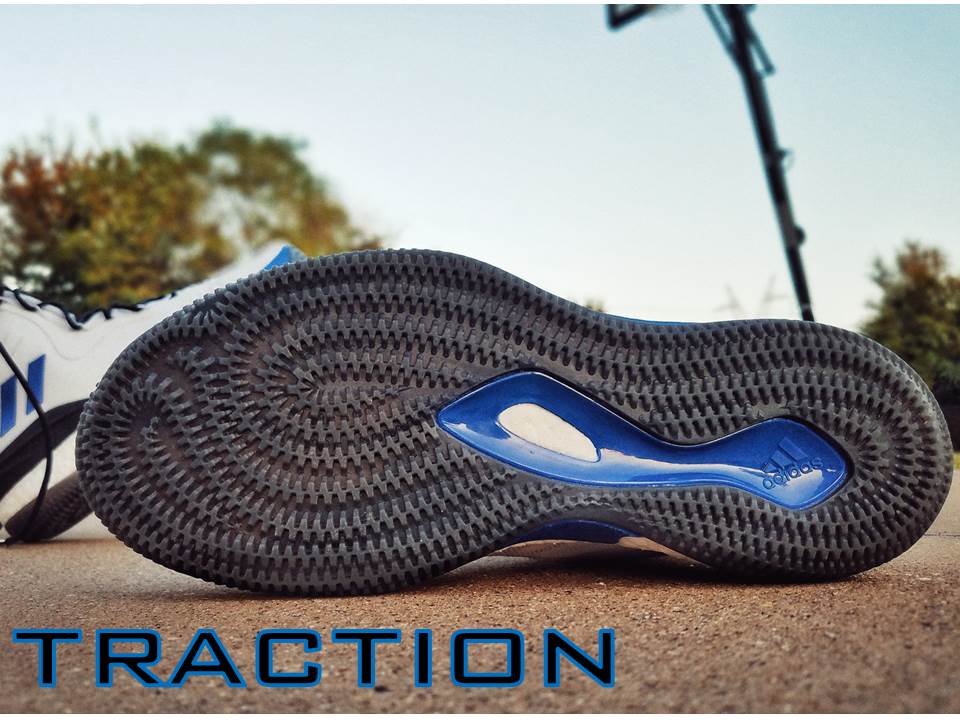 The Rose 7 had a traction pattern based on the Chicago fire of 1871, using herringbone in an overall wave pattern to provide stick and grip on any surface. The sole was covered in tacky rubber, translucent on some colorways and solid on others, that did not want to let go — like the nerd dancing with the homecoming queen. Only one real issue: the pattern was shallow and the rubber was soft. Enter the Rose 8.

Utilizing a pattern some are calling “zipper,” rumors are it is actually based on the stitches Derrick has received from his multiple surgeries since entering the league. Kind of a sick joke, but if he approves, so be it. Whatever it is based on, the stuff works and works well. It doesn’t have that aggressive bite of the 7, but no problem. The Rose 8 still stops on a dime and holds the floor like a grudge (word, Rakim). Dust was barely an issue because the pattern is wide and pushes any debris out and off the sole to keep you ripping.

The real improvement is the thickness and hardness of the rubber. The Rose 8 could definitely be played in outdoors for at least a couple of months and be okay, especially on smooth concrete surfaces. 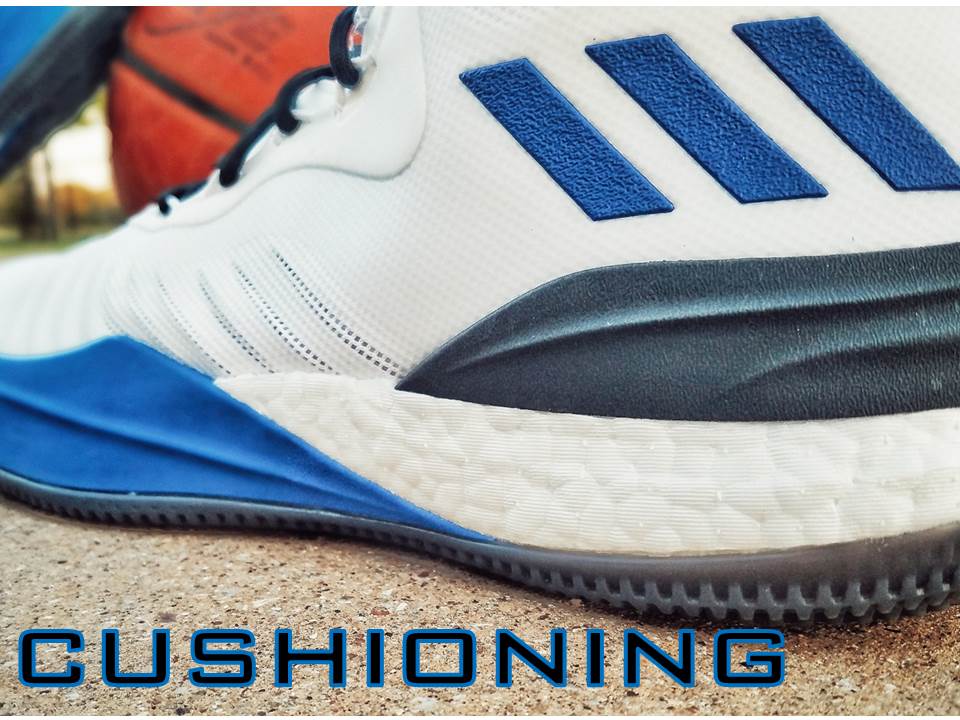 Really, we could just write “full-length Boost” here and be done, but that’s way too lazy. If you liked the Rose 5, or Rose 7, or even the Harden Vol. 1, you will like the Rose 8. The heel is thick and plush, with serious impact protection. There is nothing like coming down from a rebound and feeling the heel completely cushion and protect on that off-balance landing (we’ve all done it). The grey (on this Rose 8) heel cup comes down over the top of the Boost slightly, much like the Rose 7 did, containing the Boost so the stability and transition is started on impact.

However, the forefoot is where the magic happens. One thing the Harden did well is court feel plus impact protection, something Boost basketball shoes had a problem with in the past. By caging the forefoot, the Harden kept the Boost from compressing past a certain limit, meaning it has nowhere to go but up — back into shape and propelling your feet into the next step.

The Rose 8 does the same thing. The stiff lateral cage controls compression and pushes back into your movements. The best feeling in the world for a jump-shooter is coming around a curl and plant that lead foot, turn with no off-balance feel or delay, catch, rise, and release, with a smooth, impact-free landing — it makes shooting so much easier.

The medial side is uncaged, so that freedom of movement and comfort is still there, but like Jekyll and Hyde, the two sides work completely differently. 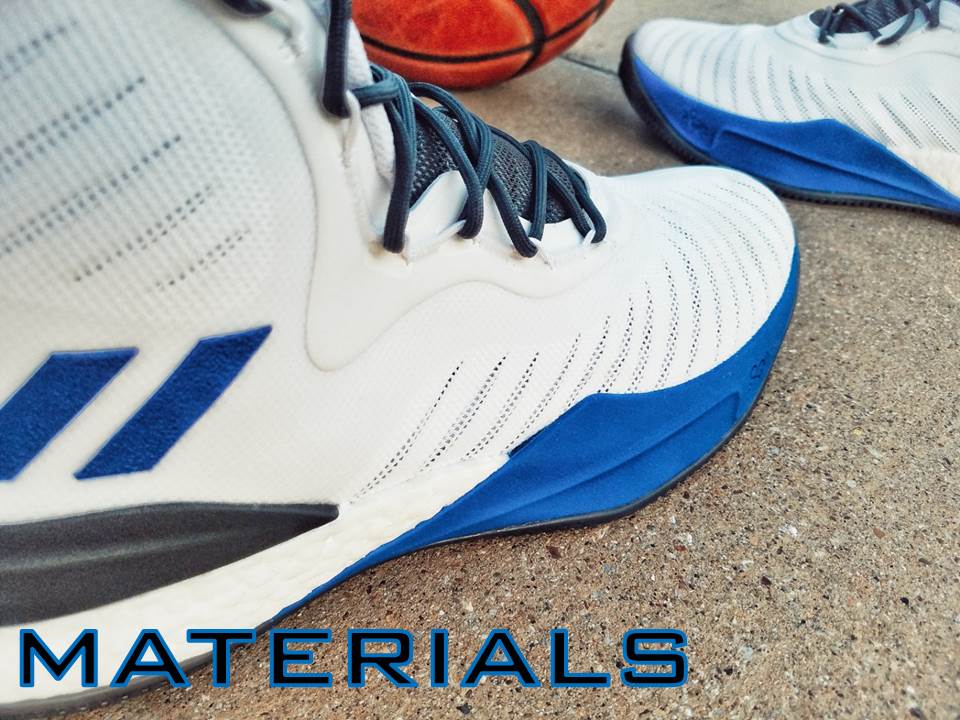 If the Rose 8 has a weak spot so far, it is the materials, but wait! It ain’t all bad. Yeah, the mesh and fuse would feel right at home in 2012. The matte paint and 3-stripes branding look last-minute. And the slits — are those…gills?! But just when it seems all is lost, you put the shoe on and it feels great. Really, really good type of great.

The mesh is stiff at first but will break in within the first hour of wearing full court. The slits are cut just right across the toebox for flexibility so running feels extremely natural for a solid shoe. The Rose 8 has fuse from the heel down to the midfoot for additional support in that high-stress area and around the laces for cord support (more on that in Fit). The mesh has a foam backing that keeps the hotspots away, as well as an inner bootie system, and the ankle loses the GeoFit pads but is cut narrow to keep fit at a premium.

The only worry about the durability of the materials is that cord lace system. One wrong pull and you are popped. I pull my laces tight and no signs of popping yet, but it could happen.

Just like most of the Rose line, different colorways of the Rose 8 will feature different materials. The Navy/Grey appears to feature a jacquard or a heat-welded mesh, like the Dame 3. A Rose 8 in that material is on the way, so stay tuned for an update on how that material performs. 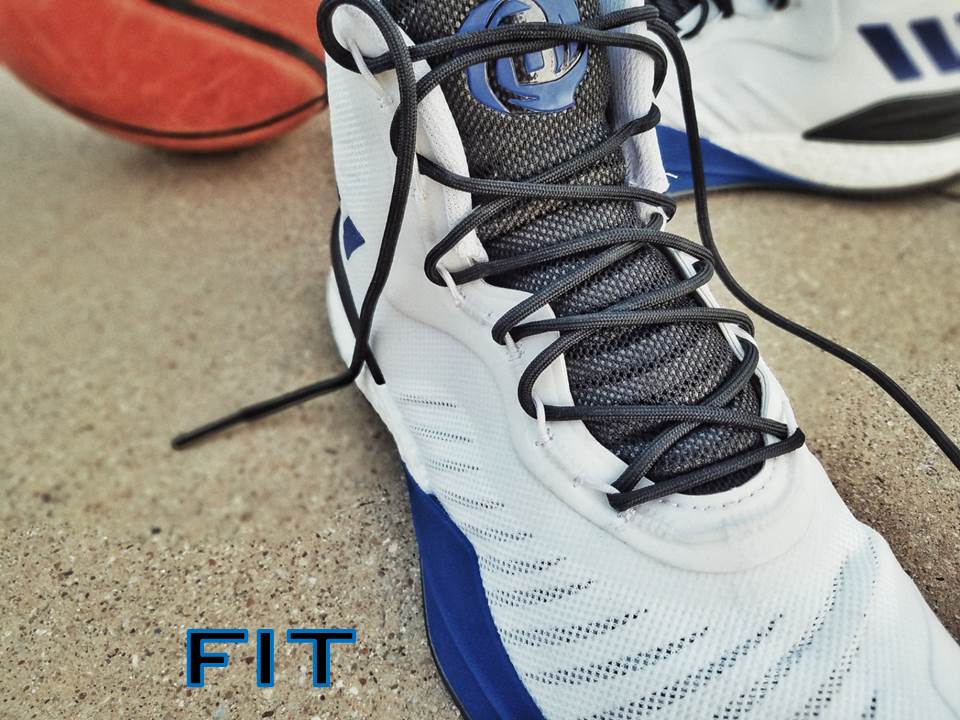 If a shoe cushions well but fits like _____, it doesn’t get much play around here. The Rose 8 has been on my feet constantly. Don’t get it wrong — the forefoot feels a little roomy at the start with some side-to-side movement, but let that mesh soften up with some run-time heat and then pull the laces tight and BAM! No sliding.

The toebox looks long, since the first laces are set back behind the toes, but staying true to size was the play. For reference, this Rose 8 is a 10.5 and my Rose 7 and 6 are 10.5 and the fit is about the same.

As for midfoot fit, the lacing system is the trick. Again, let the mesh warm up and the shoe get some flex points and the fit improves. This is the area where the foam-backed mesh shines; it molds around the midfoot and straps in for the long run.

Ankle fit should suffer without the GeoFit padding found in the Rose 7, right? Wrong. The ankle cut is differently — it has an angular design from front to back that drops into a pointed seam on the back of the shoe. This would be a point where most shoes would rub the Achilles and cause blisters, but the padding is thick and dense enough to keep the outer mesh away from the foot. Even in no-shows I was good.

The corded lacing system works so well in tandem with the wired lace holes in a true dynamic fashion that you can lace some areas tighter and some looser to conform to your foot. The only issue here is the laces keep coming undone – three times during one game!

Luckily, my friends in the Philippines sent me a web link to try different lacing styles that worked. This meant my foot was pulled into that thick heel padding and heel counter for no slipping or sliding at all. 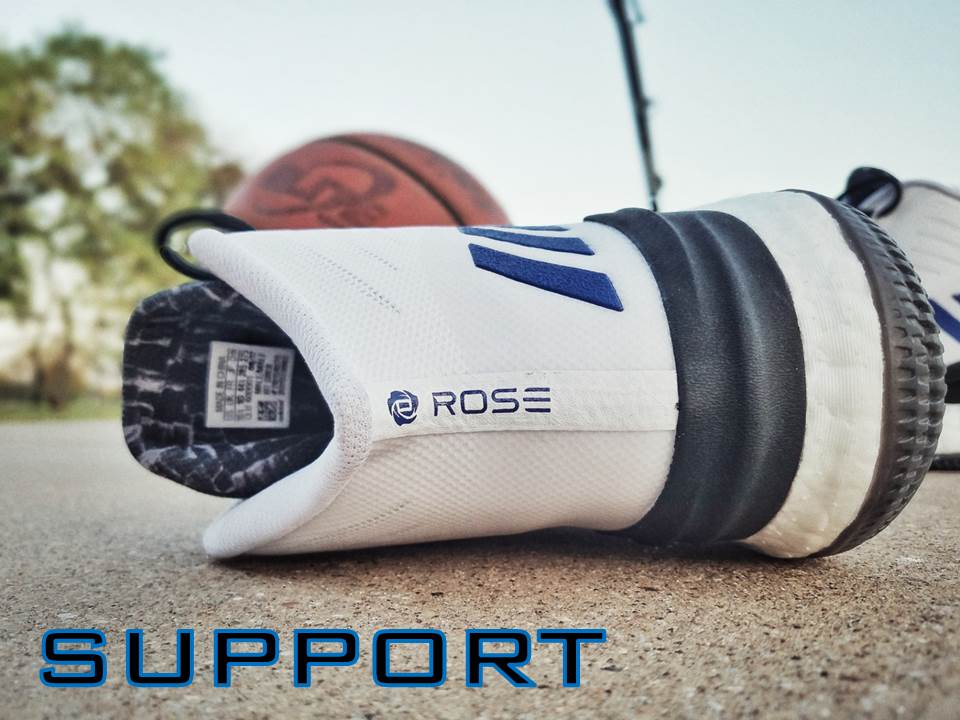 Rose shoes are always supportive, which seems strange given his injury history. Just goes to show support isn’t necessarily all you think it would be. With the design of the Rose 8, that makes sense.

The Rose 5 had ankle braces built in, with the pods from the midsole up to the ankle. The Rose 6 saw seatbelts for feet and a huge thick and padded collar, one of the bulkiest cuts around. The Rose 7 last year had a thickly padded GeoFit collar and an overlay ankle support system.

Yeah, not much. But don’t get it wrong — what is here works great. Again, good design and materials are often all you need for support, and the Rose 8 has both. The base is solid and wide with great traction — no slipping or tipping over on cuts or moves. The upper is supportive with no stretch, so containment on hard cuts is strapped and locked. The ankle is locked in with the high cut and padding. And underfoot, in the middle of that Boost cloud, you have the inifinity shank from the Crazylight Boost 2016.

Even with all of that support, the Rose 8 is still a fast shoe due to the great cushioning, midsole transition, and fit. This is the fastest feeling Rose since the 4. Actually, I would call this the Rose 4 Boost. 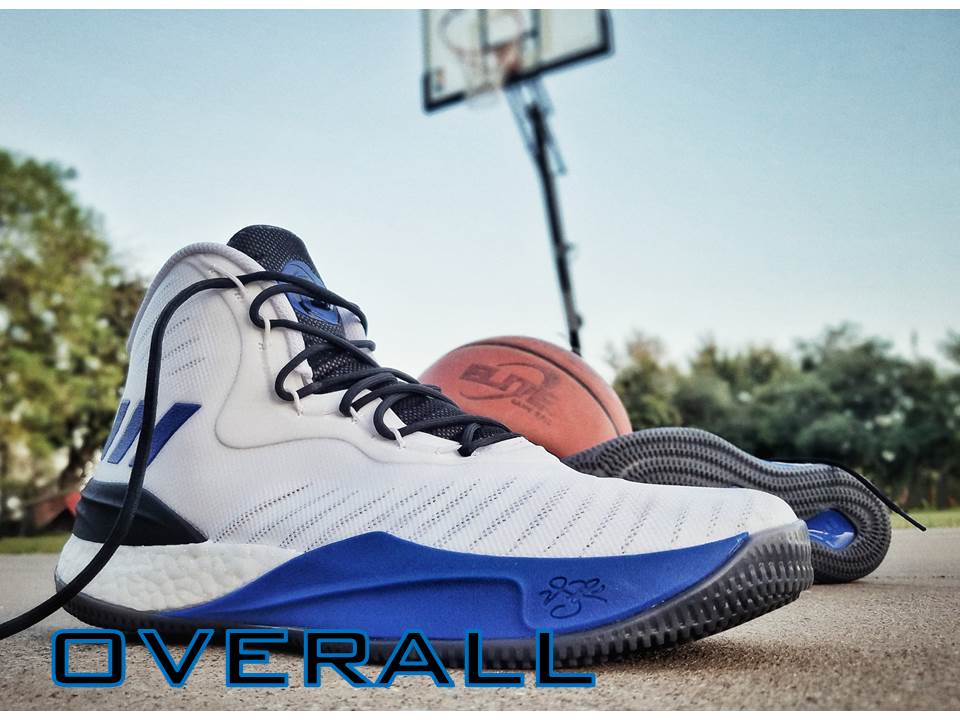 While it seems Derrick Rose may be in the twilight of his career (really, really hope not), his signature line seems to be gaining ground. By combining great traction, awesome cushioning, and serious fit, the Rose 8 is built for every player — whether you play a post up, low-block game or want to get out and run past everyone and jump higher than the rest.

The adidas Rose 8 has no weak spots. It is a shoe that does everything well, and if you don’t like the white mesh, wait for more colorways and builds to appear.

Much like the player, the Rose line has had some early injuries, but has come back in different forms and styles to keep grinding and hitting. Rose may not ever achieve All-Star status, but it won’t be because of his shoes. 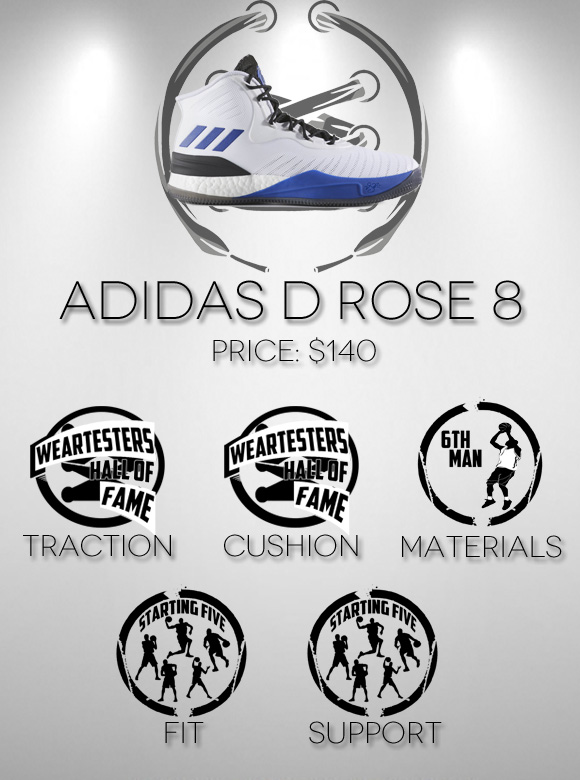