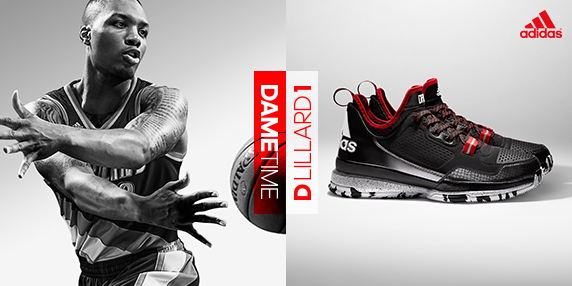 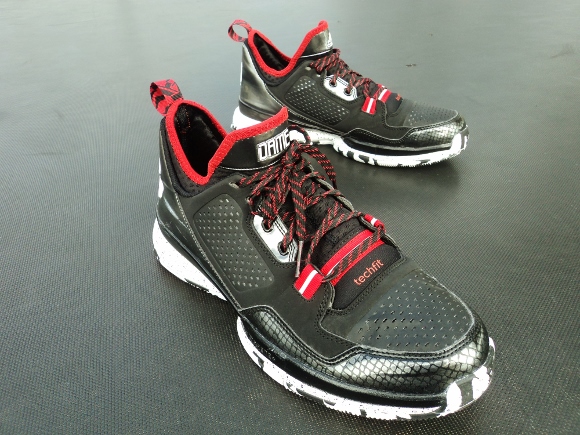 adidas started our anticipation months ago with “leaked” pics of the D.Lillard 1, and since that day ballplayers and sneakerheads alike have been standing by, waiting to see what the Three Stripes will come with. Was it worth the wait? Yes… and no.

adidas has made a commitment to guard play the last two years, signing Ricky Rubio, John Wall (transfer), Dame, Lowry, Teague, and Conley, not to mention the one who started it all, D.Rose. With Chicago’s finest on the shelf for the past decade, adidas needed faces to appeal to the young masses. Enter the D.Lillard 1. One of  the most casual-appealing basketball shoes adidas has ever produced, it still needs to perform to make my list. So, here…we…go… [divider] 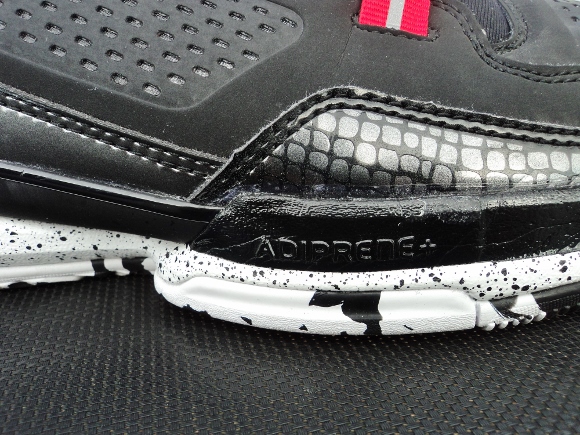 CUSHIONING – From the day the tech specs came out and I saw it was the same midsole setup as the J.Wall1, I was immediately let down. Not that the Wall is bad, but it didn’t stand up to modern foams like Micro G or Boost, or even Lunarlon. As soon as I laced up and stepped down, however, I felt bounce. Not Boost bounce, but a little feedback, like the old adiprene+ when we didn’t know better. Especially the heel slab, which is normally a downgrade for stability but we get solid stand-up stability from that area. No jarring on impact and the forefoot is low using the adiprene+ to allow you to feel the court and really dig in on defense. This was not the same feel as the Wall. Probably my favorite part of the shoe. 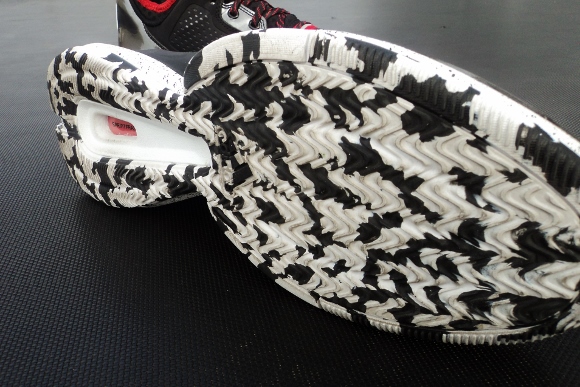 TRACTION – Using the “wavebone” pattern from the forefoot of the D.Rose 5 is genius, as that pattern and rubber compound stuck like crazy. These have been no different. Playing on some of the same floors as the Hyperrev review, but a couple different, I was grabbing and pushing any time I wanted. Running through screens and staying in front on defense was super quick, and even dropsteps were covered using the broken herringbone from the Crazy Light 3 on the heel. You can’t see it because of the cow print but there are vertical grooves in the forefoot, to give a little more lateral grab. The pattern is not very deep and the rubber is not exactly hard, so outdoors will probably be a short-lived experience, but I rarely play outdoors so what do I know. [divider] 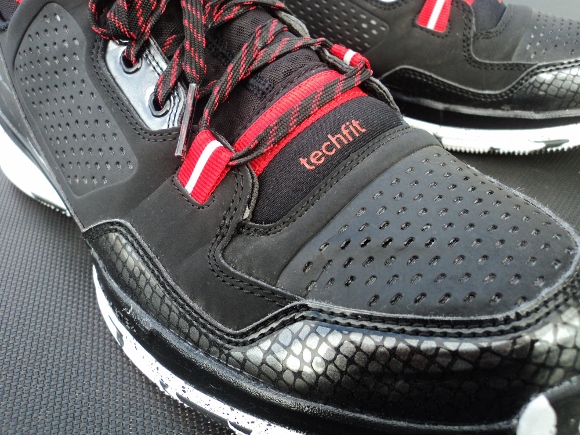 MATERIALS – Again, one of my favorite parts of the shoe. I actually have 4 favorite parts, but the fifth is so “not my favorite” it ruins the other 4 overall. Later. The upper utilizes nubucks and synthetics for a leather-like feel, going away from Sprintweb and fuses. Good. My love for all things natural is well known, and with these, the Melo 11, the BrandBlack series, and some others, I am super-hyped to see leather-like uppers coming back. These pics were taken after the review process, so two weeks, 8 days playing full court for at least 2 hours a session, and they still look like this. Some wrinkles, but it is the shoe “learning” your foot. Makes the fit that much better. The TechFit tongue is masterful – well ventilated and thick – enough padding. I really like the  homage to Gilbert Arenas Gil.0 series with the faux snake print around the toe bumper. Nice personal detail.   [divider] 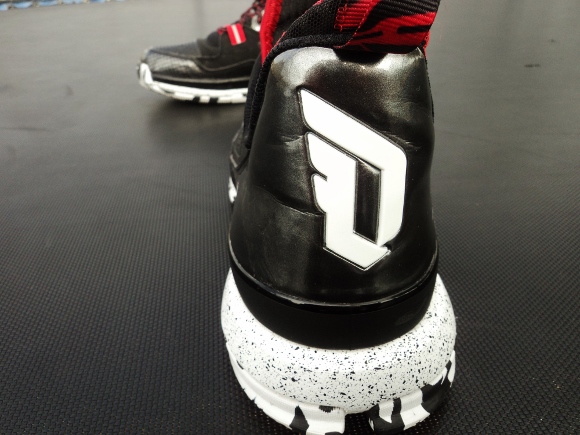 SUPPORT – Not much, really. There is a SprintFrame, but is isn’t the Rose series frame. It is limited to the black cup seen in the pic right above the midsole and stays that height all the way under the midfoot. It doesn’t give the pinch like the previous shoes – it seems to be flattened under the arch and lateral side, so no break in time to flatten it yourself. The heel cup is very short, ending at the lower creases seen in the picture. The forefoot straps do pull the shoe around the toes, giving the wearer a “push off” when driving or moving. But honestly, that is it. And honestly, you don’t need much more. Now…   [divider] 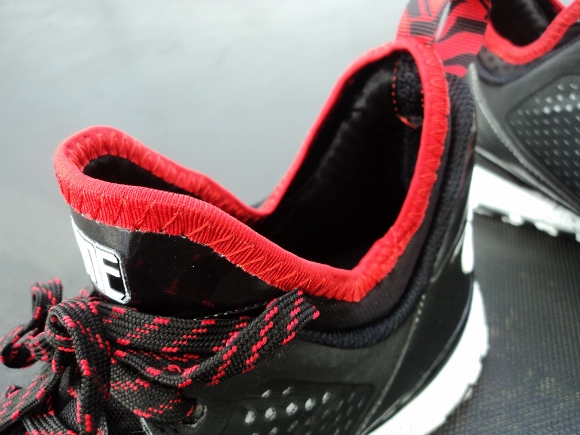 FIT – The downfall of what I think is a borderline great shoe. Forefoot is not quite locked in, but pretty close. Midfoot is the same – slight movement but workable. Heel – blew it. Badly. And it would have been such an easy solution. Let’s start at the front, though, and work our way back. The forefoot is wide, but not unwearably so. The lacing there pulls the red straps up and does fairly good job of cinching the shoe in and pulling the foot into the midsole. I felt a little side-to-side but nothing too terrible. The midfoot is the same – little movement but not terrible. And here is where the easy fixes come into play – the lace holes. The flat laces coupled with the metal lace holes let the laces slip back through once they are pulled tight. It is almost impossible to keep the shoe tight in that area without some work. Luckily the midfoot materials are formed and molded to fit well, taking up most of the room. 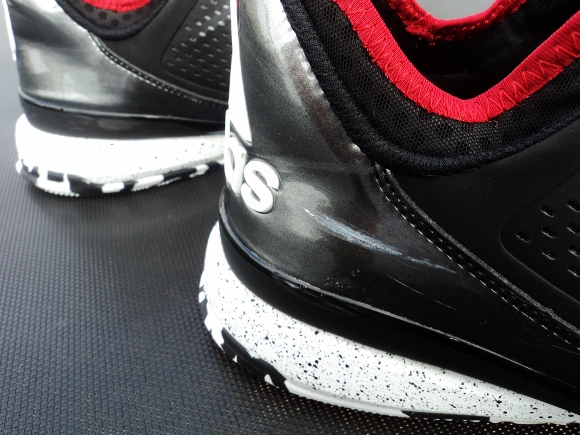 Now we get to the real problem, and for me it is huge. The heel fit is…off. And I say it that  way because it felt like the shoe was coming off when I wore it. It did get better at the end of the review as the materials broke in, but unless you lace EXTREMELY tight, you will get some serious slippage. But if you do lace tight enough to stop the slipping, you get some serious lace pressure on the front of your ankle. The bad part is, the solution was simple – the throat is wide and the lacing stops low, so immediately you have a lot of area for movement. With the heel counter being so short, there isn’t really anything to hold the heel in place – no extra padding, no contoured areas, just the TechFit sleeve. The silver material is extremely pliable so it lets the heel move however it wants. If a real SprintFrame heel counter was used, or somehow added one more lacehole, problem solved. So close.They do run true, so whatever you normally wear, get it. I have seen debate on sizing down to stop the heel slipping, but length-wise I think they will be too short. [divider] OVERALL – What could have been a GREAT shoe, knocked off by one little (BIG) problem. The Lillard is so smooth in transition and the court feel is some of the best, bringing traction and the adiprene+ together to just make you feel fast, until that clunky heel fit makes you stop and stabilize. Maybe I overthink it – maybe I am the only one with this problem. I mean, they work for Dame, and Kyle Lowry has been wearing them, and the Badgers had some killer PE’s on last week. But to me, the heel slip took away from the greatness of the rest of the shoe. For $105, they are a pretty good bargain, getting better materials, great traction, and a little bounce in your step. And honestly, they look clean as f— in the All-Star colorway, and the March Madness colorways coming next month. I even like the cow print of the Aways. Just try them on first. 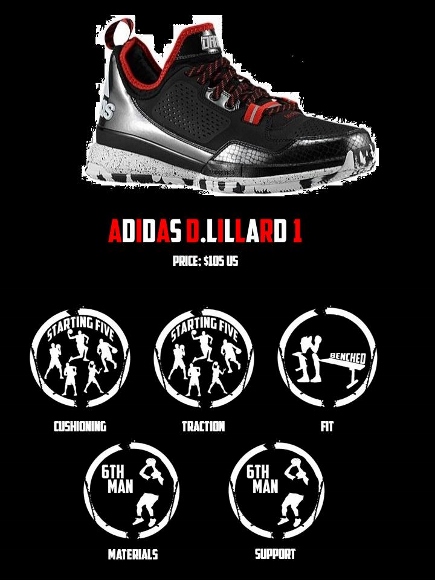