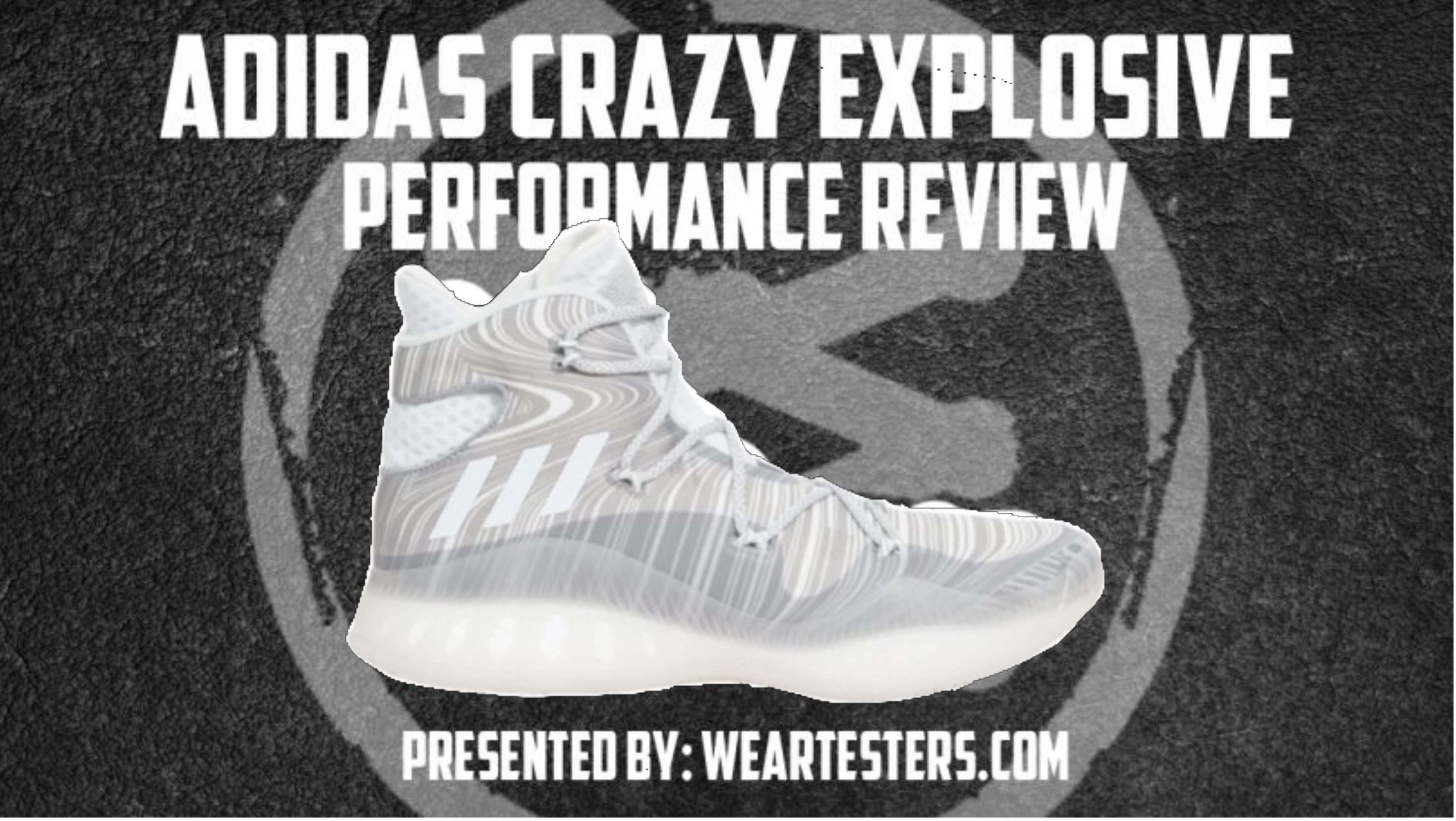 These are the shoes that your feet dream of having on… 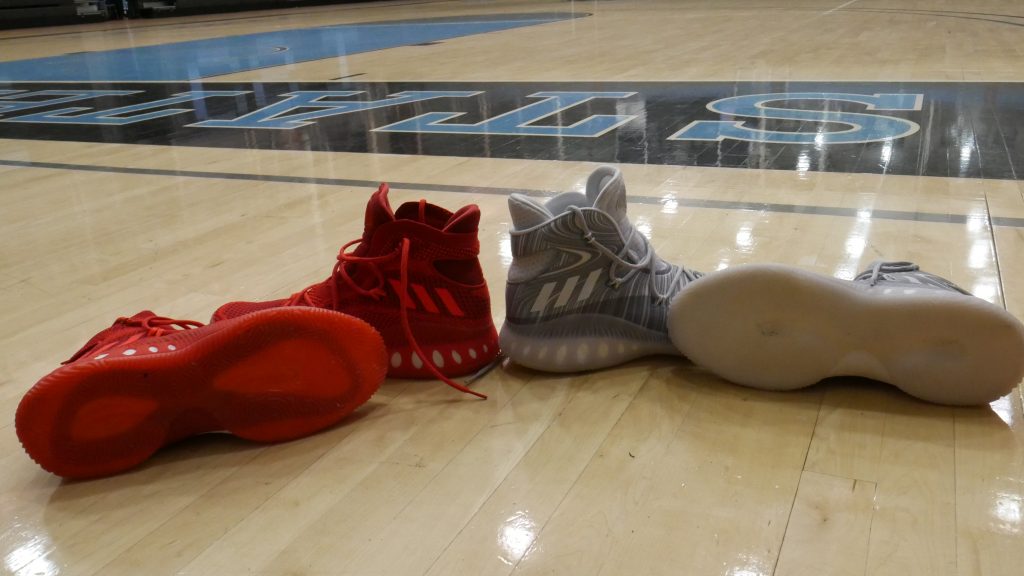 Traction – Legit. That’s how I describe it. The traction held it’s own no matter what I threw at it. When the outsole picks up dust you do need occasional wipes, just like almost every other shoe. The coral reef pattern really helps with transition from stop and go. No matter what I threw at it, I was able to stop at the drop of a dime. It’s not to say it’s the best traction, but it’s among the most adequate. I do wish that the traction pattern utilized was the from the adidas D Rose 7.

Other than that minor exception, it would have been great for the Three Stripes to have utilized the Continental rubber on its outsoles for more durability. I definitely wouldn’t recommend playing in these bad boys outdoors due to the soft pliable rubber that will wear out quickly. The Primeknit and neoprene versions utilize the same traction pattern and both work very well so there’s no need to even second guess. 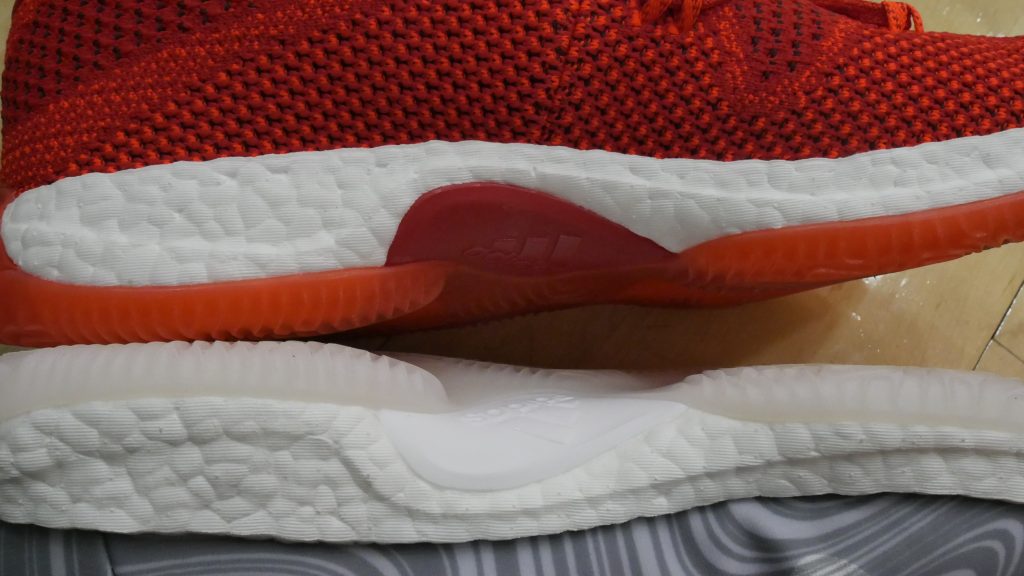 Cushion – I’ve said it once and I’ll say it again: BOOST IS LIFE! This is literally the UltraBoost of basketball. Comfort, impact protection, responsive feedback — it’s top notch. I’d say that this is the most comfortable ball shoe I’ve ever put on my feet based on cushioning.

A lot of you might thinking, “Oh man, UltraBoost, but how does that affect stability?” Well, TPU wrapping along the lateral side of the midsole keeps the shoe together and it’s barely noticeable. The TPU caging is more open in the Crazy Explosive, allowing the Boost cushioning just enough space to expand a little bit more for a more responsive feedback upon impact. I’m surprised this method wasn’t used in the D Rose 7 and the Crazy Explosive 2016, but each shoe is specified to a particular type of playing method towards different ball players.

For the elders among us that require a super plush and responsive feeling look no further than the adidas Crazy Explosive. The Boost in the heel makes you feel like you’re on cloud nine, while the forefoot feels a little lighter on the Boost pellets. Lighter? Yes. For the Crazy Explosive,whether it be the Primeknit or the neoprene model, the Boost cushioning is the same and it’s super awesome. 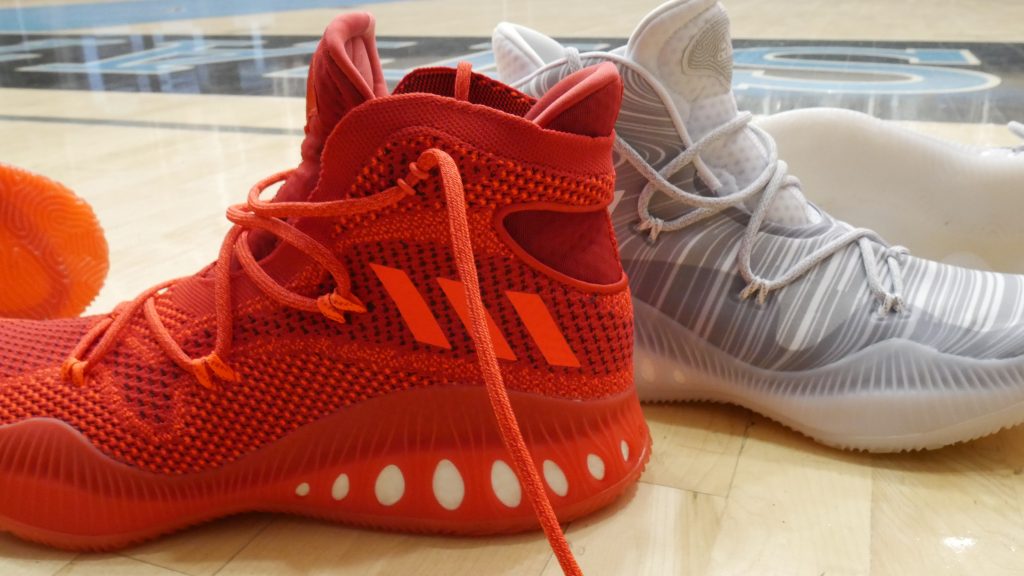 Materials – This is where things differentiate. There’s a Primeknit version and a neoprene version. The Primeknit version is true Primeknit with no fuse layers. There is nylon that is also placed in particular high wear areas so that the materials don’t over-stretch and make your feet give way.

The neoprene version is a full neoprene upper with visible fuse layers along the midfoot on the high-wear areas for proper durability and lockdown.That’s pretty much it. The upper materials are the only difference in the shoe, with the neoprene version feeling slightly lighter in hand (surprisingly). What’s for sure is that the materials utilized on both versions set the bar pretty high for other companies to try and follow. 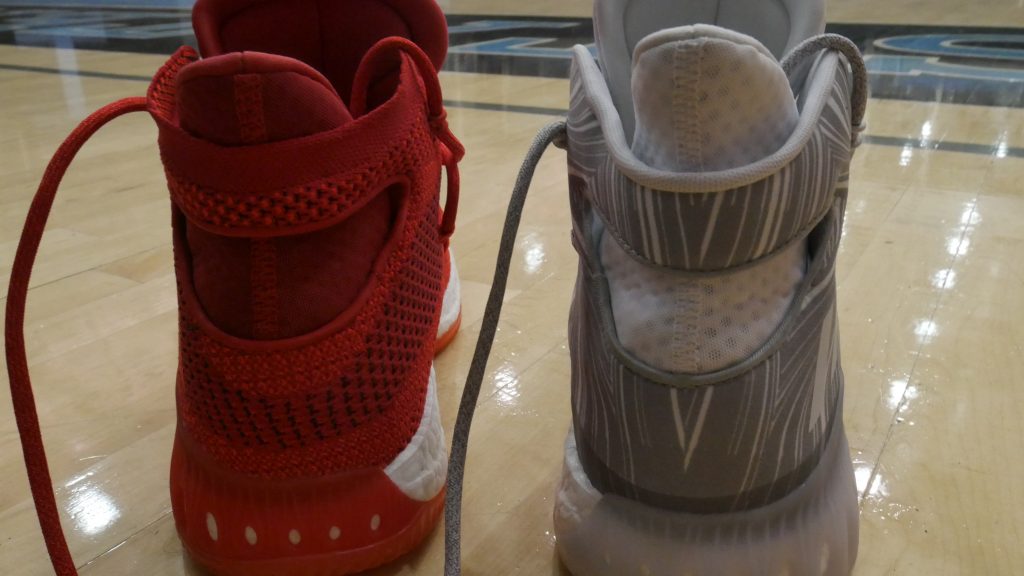 Fit – I’ve tried on pretty much all the major brand basketball models this year and I must say that the Crazy Explosive fit the best out of them all. The Geofit bootie wraps around your foot giving you a one-to-one fit. The materials allow for tight lockdown without any protrusion.

Whether it be on the Primeknit or the neoprene version, I had to loosen up the lacing along the first lace loop due to some minor pinching at first, but with adjustments, that disappeared quickly. The top eyelet needs to be relaced every so often due to the stress generated by hard and quick movements. Although it isn’t an issue it’s worth noting. Individuals who wear ankle braces should have no problem.

The extra nylon and Primeknit stitching did not harm the fit of the shoe nor did it overstretch the material. The neoprene model didn’t have any issues with the fuse overlays on the high wear areas and your feet at bay. However, I was quite surprised with the four lace loops and adidas’ ingenuity; the concept of strategically placing the lace loops for proper lockdown was quite a surprise. 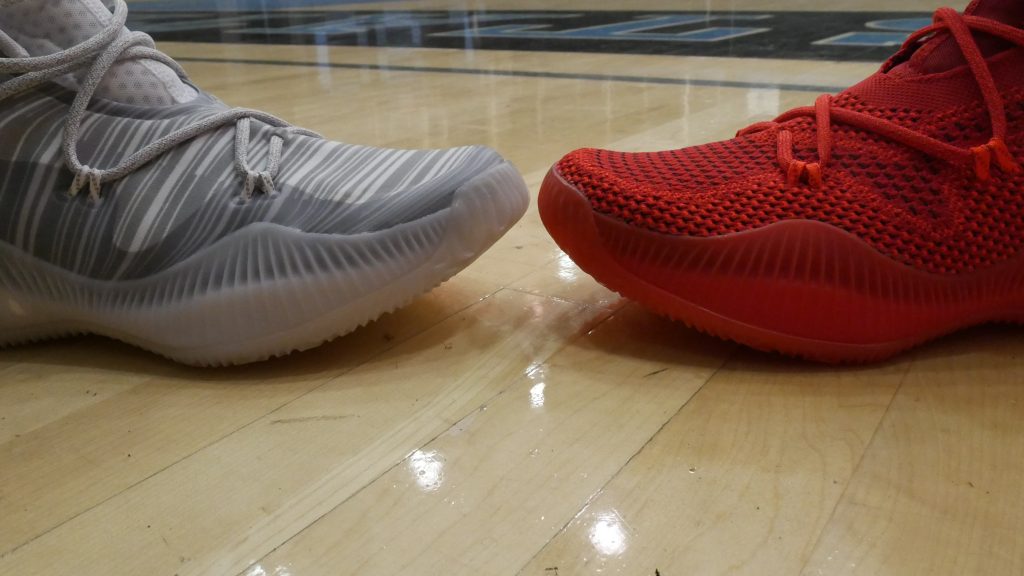 Support – The support comes mainly from the fit of the shoe, the cushioning, and it’s traction pattern. The strategically placed lacing system keeps you locked down with minimal restriction. If you want to feel like you’re floating on clouds on a basketball court, either one of these models will make that happen for you.

The infinity-shaped torsion plate (you can see a deconstruction of the Crazy Explosive here) offers proper support while keeping the platform of the Boost stable. What more can you ask for? (Well, that Continental rubber traction and that D Rose 7 outsole traction pattern — am I asking for too much?) 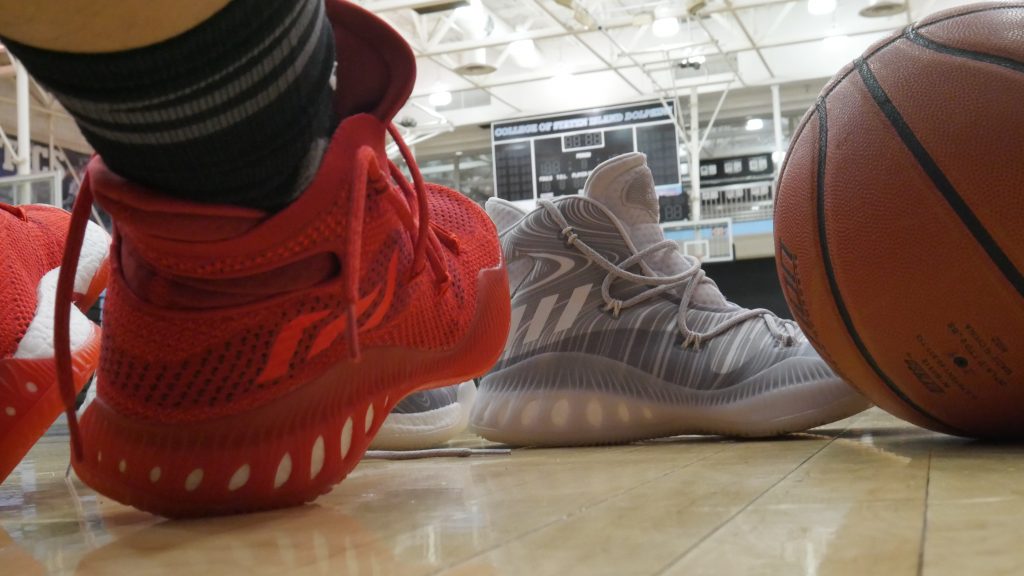 Overall – As originally planned, I wanted to try out all the adidas basketball shoes this year — something I’ve completely accomplished. Each shoe has its advantages and disadvantages. However, I’ve found the one suited for me and my darn old age knees. Although the adidas Crazy Explosive may not be visually appealing (completely subjective, you decide), it feels great on-foot. It performs much better than it looks. Both version of this model will definitely stay in my gym back because Boost is life. Whether you choose the Primeknit or neoprene version, they will perform perfectly the same way. It all depends on your preference of material, choice of color, and your finances (the Primeknit is $20 more).

These were initially the John Wall model prior to him leaving the Three Stripes, so these transitioned into the Andrew Wiggins shoe. With the hops he has already, I’m sure he won’t mind the extra bounce the Boost gives on this model. The Crazy Explosive shoe works regardless of the position you play. If you prefer a more plush and bouncy type of cushion, particularly for those who need it for their knees, then this model is for you. But if you’re a slash/drive type player, and like low-to-the-ground court feel, then the D Rose or Crazy Light 2016 might be a better choice.

The adidas Crazy Explosive is definitely a great shoe and exceeded expectations. adidas now has a great platform to build upon for next year so I look forward to what’s next — we’re just along for the comfortable ride. 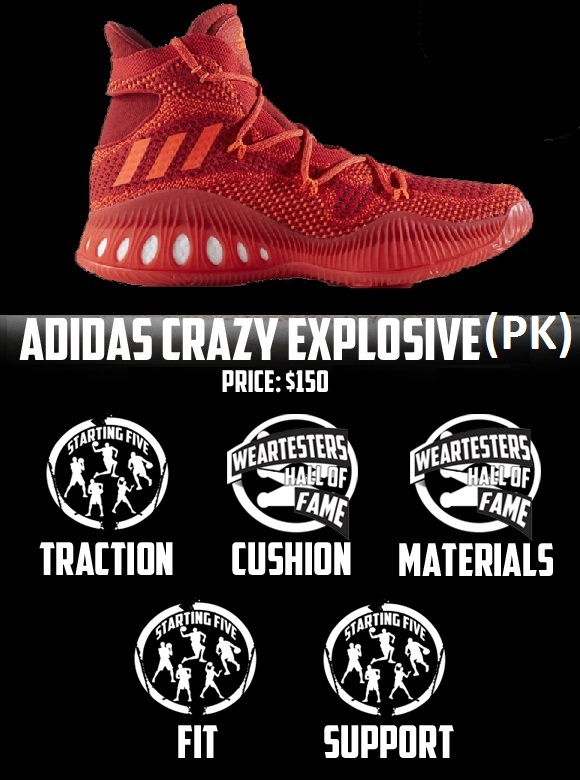 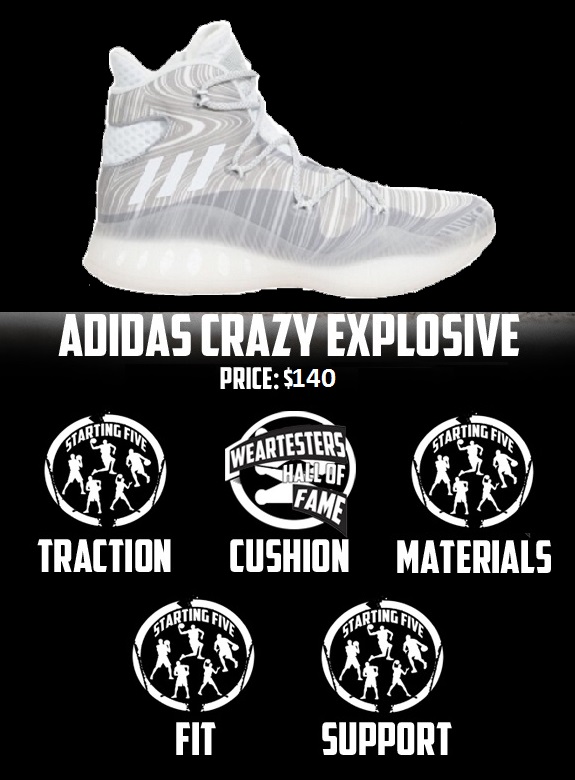