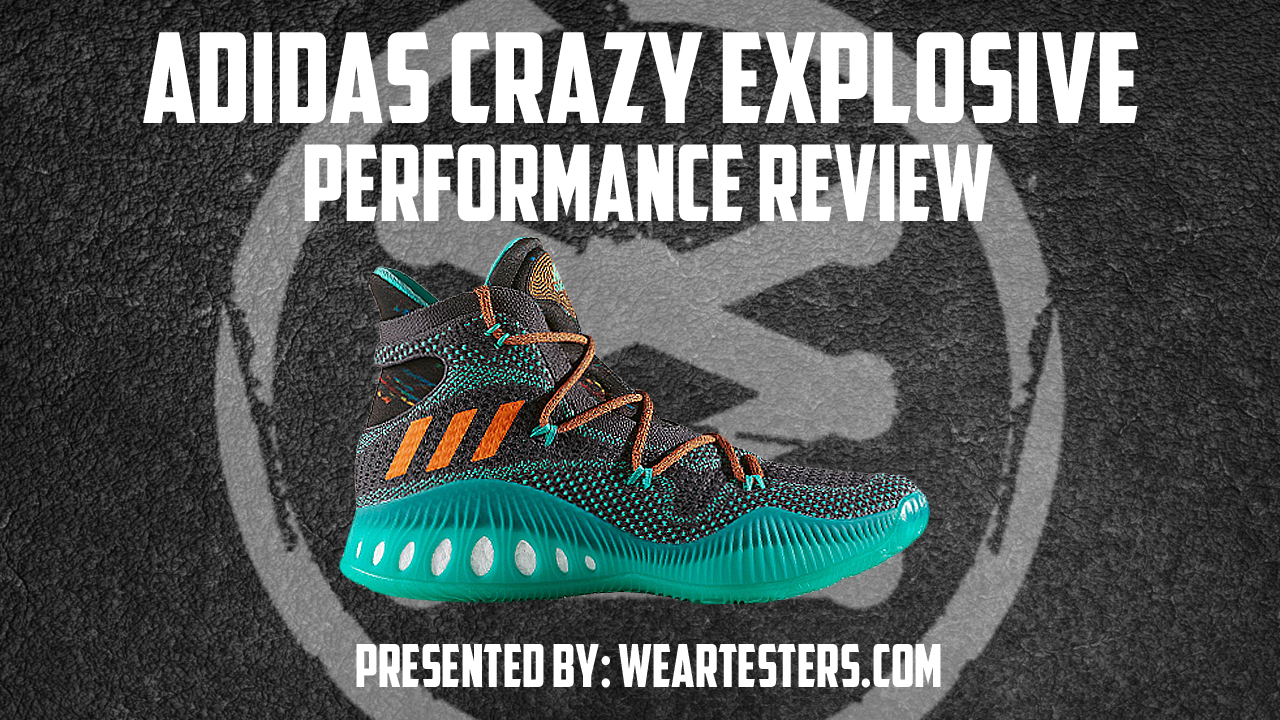 Traction: adidas calls it “coral power traction,” but you can just call it solid. If you’re one of those lucky souls that gets to plays on pristine floors that are well maintained, good for you. The rest of us usually play on grimy, dirty floors that make us rely on a great traction setup to keep us from slipping all over to court. Luckily the Crazy Explosive does exactly that. How you might ask? For one, the rubber compound is extremely pliable and started to show signs of wear after only a few hours of use on the outer edges of the outsole (so outdoor play isn’t recommended).

Second, the traction pattern is spaced perfectly so that dust won’t get caught in between the grooves to pester you later. Lastly, the traction wraps up slightly onto the midsole in the medial forefoot and will keep you grounded during those hard v-cuts and quick stops. Don’t expect these to last long but while they do you’ll be covered no matter what conditions you come across.

Cushion: This is Boost. If you didn’t catch my CrazyLight Boost 2016 review, I mentioned that the Boost midsole in that model was a little too firm for my liking and lacked the “Boost” I was looking for. The Crazy Explosive does not have this problem. If you enjoyed the cushion setup in the Rose 6, you’re going to love this model as it ups the ante by about 20% (this is just a guesstimate), proving an explosive ride that turns hard landings into crazy explosive take offs. I know it sounds punny but the shoe got its name for a reason.

While small areas of Boost can be seen on the lateral side, most of it is encased in a soft TPU shell which is how the Boost midsole is able to remain stable. Meanwhile, on the medial side the midsole is fully exposed allowing you to get the most out of that plush Boost foam. Nothing on the market makes you feel like you’re jumping higher and running faster like the Crazy Explosive does.

Materials: The best. That’s right, the Primeknit version of the Crazy Explosive has the best materials ever utilized on a basketball shoe. The Primeknit upper is stretchy, soft, and with no glue getting in the way, it’s simply comfortable and wraps around you like your favorite blanket. There is also an inner bootie that is made out of a neoprene-type material which is extremely well padded giving you a pillow-like feel that will seriously change the way you think about materials on basketball shoes. I can talk about the materials on the Crazy Explosive all day but all you need to know is that for $150, you’re getting a woven upper that has no fuse or glue, over a soft inner bootie that clings to your foot like a warm hug. Sounds pretty good right?

Fit: Never has an adidas model fit my foot so well. They’re not perfect, but damn near if you ask me. The length of the Crazy Explosive is right where I want it, my toes have just a tad bit of space in the forefoot which prevents my toes from slamming into the front of the shoe. However, at the midfoot and heel it’s a slim fit. At first you might feel some pinching in the heel area but after a short break in period, this problem is resolved. As for the midfoot, they still fit a little snug but loosening the middle eyelets helped remedy this problem and I would recommend doing this instead of going up half a size. The top eyelet did need to be re-laced every so often; this isn’t a major issue but something worth noting. Also, adidas has implemented its GeoFit system within the inner bootie and thanks its extremely low cut, players who wear ankle braces should have no problem slipping into the Crazy Explosive. Using woven materials for on-court models isn’t easy but adidas did a lot of good with the Crazy Explosive. Thanks to the inner bootie underneath the stretchy Primeknit upper and strategically placed eyelets, the Crazy Explosive fits like a glove…a very snug glove.

Support: There are three main components when it comes to the support on the Crazy Explosive: the fit, the wide forefoot, and the TPU springplate underneath the midsole. The snug fit that is provided by an inner bootie and strategically placed eyelets keep your foot locked in where it’s supposed to be. The flat, wide base in the forefoot keeps forward moving players on their feet at all times. That TPU springplate in between the midsole and outsole not only offers torsional support but it also allows the base of the Crazy Explosive to remain stable, making sure your foot doesn’t bend in the wrong way. You won’t notice the support features in the Crazy Explosive, but they’re there and they’ll keep you covered while you focus on what is most important: getting buckets.

Overall: It’s been a few years since I had this much fun with an on-court model. It may just be novelty bias but this might just be the best basketball sneaker ever because the Crazy Explosive just kills it in every category. Cushion? Amazing. Materials? The best ever. Fit? Like a glove. Support? Subtle, but effective. Now don’t get me wrong, they’re not absolutely perfect, the cushion setup won’t be for everyone as it may feel a little too spongy for some and outsole durability might be a turnoff for those who need something to last them an entire season or a long period of time. But, if you want a shoe that will conform to your unique foot shape and provide an explosive ride that makes you feel like you’re running faster and jumping higher, look no further because the Crazy Explosive has your name written all over it.