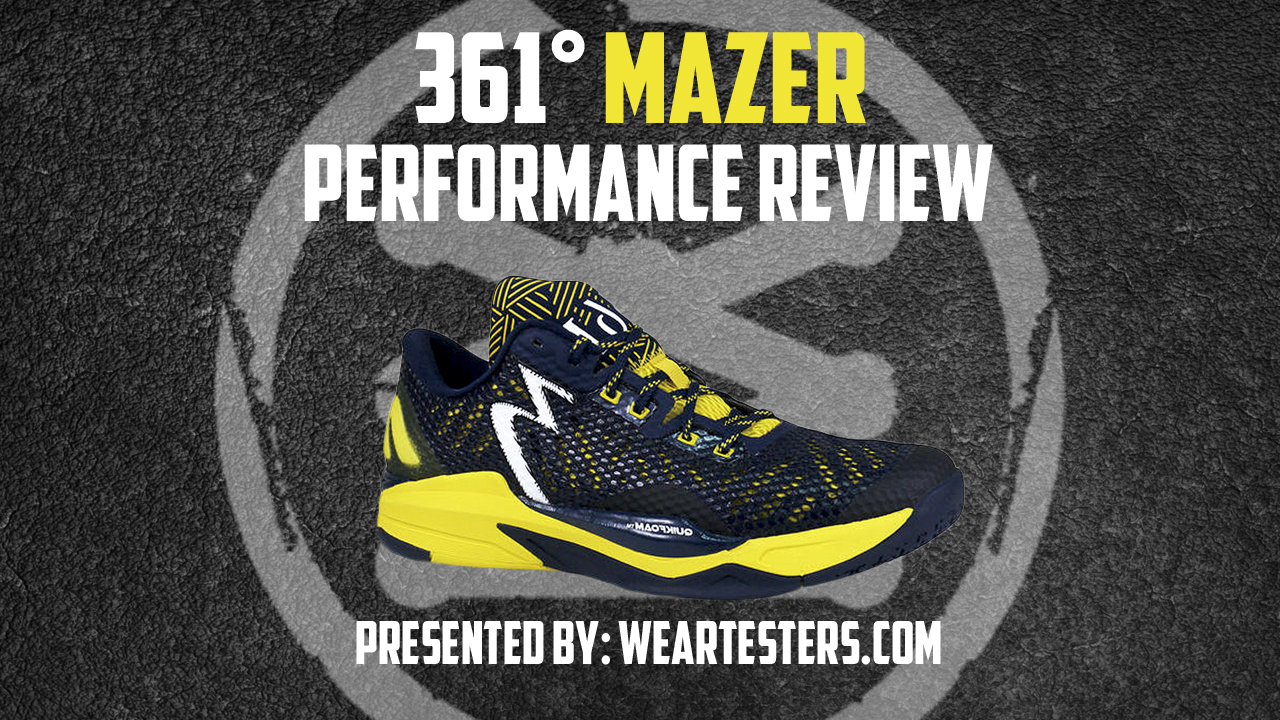 TRACTION – Although it doesn’t look like much – shallow and soft – the traction is (almost) unbelievable. It didn’t matter if the floor was clean or dirty, new or old, the pattern held.

The review was done on four different courts of varying conditions, and besides a little more wiping on the dirtier courts, results were the same. Not quite top three all-time, but definitely in that step right below. Outdoors? Well, the rubber should hold up for a couple months, but the pattern is REALLY shallow and will wear down quick on rougher surfaces.  The different color rubbers are the same compound, so no help there, but the coverage is full-length and holds across the sole.

Another feature of the midsole/outsole is transition, and the Mazer is smooooth (like butta baby!!). More on the runner’s last in the Fit category, but the forefoot curves up, like a runner (and the Nike KD5 if any of you remember). This rolls the foot smoothly into the next motion easily, and just makes steps and jumping effortless (except for being out of shape — that’s on you).

CUSHIONING – The. Best. Part. Hands down: the Qu!kFoam midsole is a construction of beauty. Taken from the running line (the Spire and Strata having been reviewed here and here), Qu!kFoam is both soft and firm. WHAT??? How can that be? Well, initial impact causes a sink into the foam, which quickly stiffens and responds, bouncing the shoe back into your next step. Sounds kind of familiar, huh? What would it compare to? Closest thing is Bounce from adidas or Micro G. Really, it is that good.

The forefoot is low and quick while the heel is dense enough for bigger players to bang in. All but the heaviest of players should be good with the cushioning. Again, for a “newer” company and technology, Qu!kFoam is a great compound for basketball already.

MATERIALS – The only part of the shoe that is slightly behind the curve is the fuse and mesh upper, although it does compare with what other companies are doing. Actually, the upper mesh feels like the Hyperlive from Nike. The Mazer has a ¾ length tongue/bootie system that keeps the rough fuse-mesh away, while the outer shell has no give at all. The lacing system pulls the outer cage around the midfoot for complete lockdown, while the super-fat tongue pads for lace pressure (LOVE the tongue design). Pretty standard stuff by now, but it all works very well on court.

FIT – The second best part of the Mazer. From heel to toe, if sized properly, your foot is completely locked in without ANY lace pressure or restrictive feeling. That’s a big deal; most shoes can achieve lockdown but the laces are so tight your foot goes to sleep. By using a running last, the shoe is more formed to the foot instead of depending on straps and systems. The only real padding is the tongue and the heel, so the fit is just form. One thing that is nice, and we saw it in the Kyrie 2, the Hyperlive, and the Lillard 2, is the setback of the first set of laceholes. This lets the forefoot spread and flex naturally with little restriction. Super-comfy and makes movement that much easier.

SUPPORT – For a low top, a REALLY low top, surprisingly good. A wide, solid heel base, forefoot outrigger, midsole bumpers around the midfoot, and a low-to-the-ground ride cut any instability from the shoe, while the midfoot has a small TPU shank for torsional support. The heel cup is soft and doesn’t exactly cover much, but the rest of the structure does such a good job that a larger mold would be overkill. Probably not the best choice for larger post players, but anyone who plays fast and runs or comes out for spot-ups and plays D will be good.

OVERALL – Once again, a smaller, “newish” company releases a first or second effort and completely kills it. Yeah, there were some weak spots (well, materials, but they aren’t all that bad). If you are looking for a speed shoe, low riding, great cushion, good traction (great on clean courts), great fit, and adequate support, the 361° Mazer can’t be beat. Seriously.

We at WearTesters have been telling the public: smaller companies produce GEMS. They have to if they want to be taken seriously. 361° can’t price a shoe in this range and NOT be committed to making it the best shoe it can. Every once in a while we get to review a shoe that will be hard for a company to beat (Kobe 9, Lillard 2.0) and this is one of them. I’m not sure what 361° can do after the Mazer but based on this shoe the future is bright.